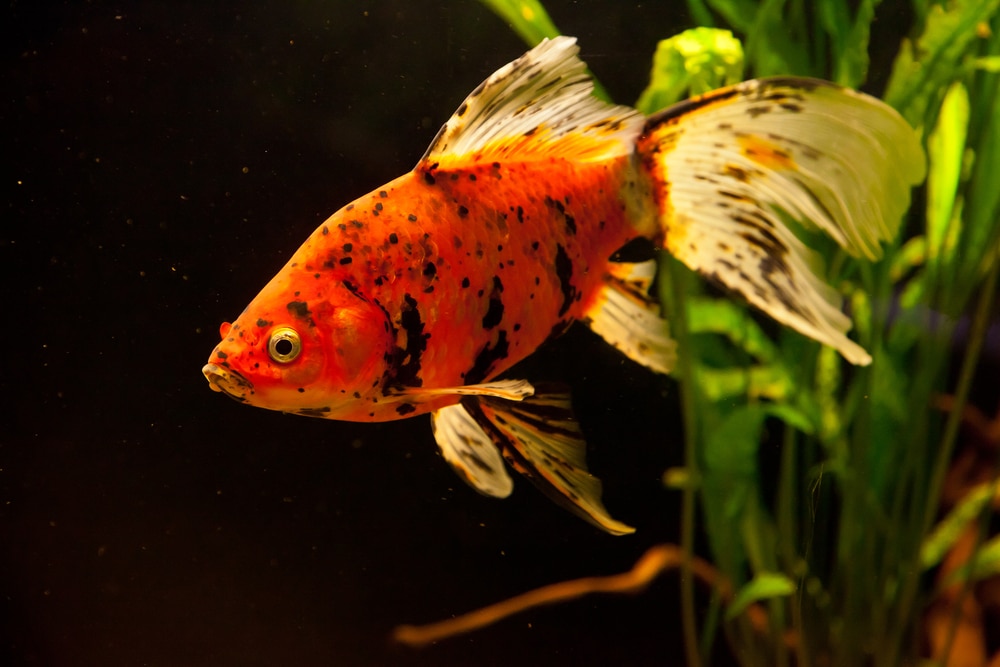 If your Shubunkin or Comet looks a bit lonely consider adding one of these 12 Goldfish tank mates to the community!

Goldfish of all varieties are a bit bumbling but peaceful towards anything they can’t fit into their mouths. A few fish on this list, such as Zebra Danios, should not be kept with 12+ inch pond Goldfish but will do nicely with smaller Lionheads or Orandas.

Their tendency to constantly root for hidden food in gravel or sand can annoy bottom dwellers who don’t move out of the way (and disturb your carefully placed plants) but is also harmless.

The major consideration for choosing Goldfish tank mates are:

Here are a few goldfish tankmates that thrive in cold water:

Also known as Poor Man’s Neon Tetras, White Cloud Minnows are an Asian hobby staple that aren’t nearly as popular as they should be!

White Cloud Minnows are great dither fish for cold water aquariums because their colors actually improve when kept at 70F or below. Both males and females take on a bright iridescence that catches the light and the red in their fins becomes much stronger.

Small, easy to feed, and incredibly hardy, they are peaceful and prefer being kept in schools of at least 6 individuals.

If you’re interested in learning more about White Cloud Minnows, have a look at my in-depth Species Guide here!

Like Goldfish, Dojo Loaches prefer moderate to cooler temperatures and do well as low as 50F. While very hardy and undemanding in terms of water chemistry they are scaleless fish and prone to skin infections when kept in dirty environments.

They are also known as Weather Loaches because they become frantically active when the atmospheric pressure gets low, which often signals an approaching storm. In Asia they are raised in outdoor ponds for food but occasionally find their way into the pet trade in the West.

Dojo Loaches are similar in temperament and care to the smaller, better known Kuhli Loach. They should be provided a fine sand substrate as they prefer to burrow and sift for worms and leftover food.

Tubifex, Brine Shrimp, and other live or frozen offerings are a fine treat but they will also take flakes from the surface with relish.

Rosy Barbs are one of the most popular Barbs in the family and are easygoing compared to the occasionally nippy Tiger Barb. Males are bicolored green with brilliant scarlet flanks that turn intensely ruby red when courting females.

While they can reach up to 6 inches in the wild 4 inches is more common in the trade. Rosy Barbs accept a wide range of water conditions but prefer a moderately acidic to slightly alkaline pH (6.0-8.0) and subtropical to temperate heat level (67-74F).

Being Cyprinids much like Goldfish, Rosy Barbs are omnivorous and eat animal and plant matter with delight. They will chew on soft leaved plants like Elodea but tend not to disturb tougher plants; vegetarian offerings such as Spirulina flakes or blanched vegetables add essential variety.

Paradise Fish were one of the very first tropical fish to be introduced to the hobby. They aren’t as popular nowadays but they remain inexpensive, hardy choices for tropical and cold water setups.

Paradise Fish need to be carefully considered because they are fairly aggressive and territorial. They should never be kept with Goldfish in an aquarium under 30 gallons as Goldfish are slow swimmers and will be harassed mercilessly.

In larger aquariums Paradise Fish offer a beautiful compliment to the thick bodied Goldfish, with blue and red tones that nicely offset the yellows and golds.

Like most Gouramis Paradise Fish are carnivorous, preferring to eat small invertebrates like Daphnia, Bloodworms, and Tubifex. However they have been tank bred for decades and readily take prepared flakes and small pellets.

Reticulated Hillstream Loaches are Asian analogues of the South American Plecostomus family. They use their flattened bodies and suction cupping fins to attach to rocks in swift currents, feeding on algae, tiny invertebrates, and microbial biofilms.

In aquaria they should be kept in mature planted tanks that are rich in both algae and biofilms. Driftwood, rock, and glass surfaces will be polished to a fine sheen so long as you keep several of these social Loaches.

There are several species in the trade, many of which are tropical. However Reticulated Hillstream Loaches, arguably the most attractive species, are temperate and need cooler conditions and oxygen-rich water to thrive.

65-70F is ideal and no higher than 75F, making them perfect Goldfish tank mates!

Danios as a group are great Goldfish tank mates but the Zebra Danio is especially compatible. While they are usually kept in tropical conditions they do fine in room temperature waters.

Zebra Danios come in a variety of color morphs; Leopard Danios, albino Zebras, and even a transgenic GloFish are just a few types available in most pet stores. They are model organisms for biological laboratories and are bred by the thousands around the world.

As hardy as they are prolific, Zebra Danios are also ideal fish for spawning attempts as they breed readily in tanks. They eat anything suitably sized and as peaceful community residents can be kept with nearly any other fish.

Here are a few tank mates for goldfish that are capable of thriving in warmer water conditions:

Gold Barbs are moderately sized compared to Rosy, Zebra, Tinfoil, and other larger species. They are also far more peaceful and won’t shred the tempting fins of Comets and other fancy Goldfish.

Instead, they will happily eat prepared flakes and pellets but should be given blanched vegetables and soft aquatic plants on occasion as treats. Gold Barbs are naturally eye-catching however your male will show much better color when kept with a less intensely colored female.

They can be kept singly or in small groups of 3 to 6 individuals. Gold barbs are model community residents and hardy midwater swimmers that busilly root around in the substrate alongside Goldfish!

Livebearers are actually an entire family of popular aquarium fish that includes Guppies, Mollies, Platies, and Swordtails. All are suitable tank mates for Goldfish but be warned that many of the babies Livebearers constantly birth will end up as snacks.

Mollies are the least suitable Livebearers as they prefer both salt and more tropical temperatures. Platies, Swordtails, and Guppies can all be kept in room temperature water and eat the same mixture of animal and plant matter as Goldfish. 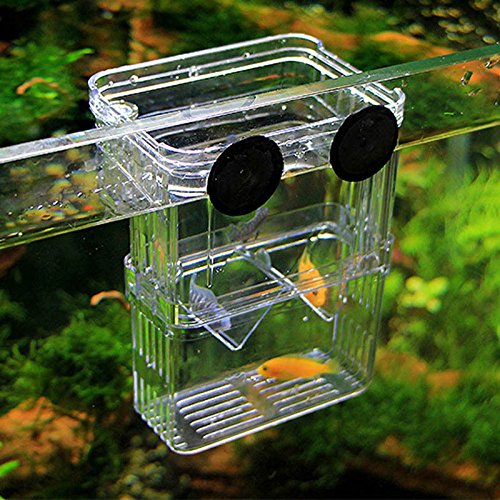 As their name suggests, Livebearers all give birth to free swimming young rather than laying eggs. As the young develop within the female they create a signature Gravid Spot that signals she is due to give birth within a couple of weeks. Aquarists looking to raise the babies should capture her and place her in a breeding trap before this occurs!

Angelfish are great Goldfish tank mates because they contrast in so many ways. Goldfish are thick-bodied middle and bottom dwelling fish while Angelfish are tall, elegant in form, and come in variations of black and silver over gold and red.

The delicate mouths and picking feeding habits are at odds with the frantic gasping and splashing Goldfish create at the surface. However both happily accept flakes, pellets, live, and frozen foods with gusto.

Angelfish are Cichlids but peaceful towards other community residents. Temperature-wise, they should be kept at around 75F for both species’ comfort. Angelfish also prefer neutral to slightly acidic water (pH 6.0-7.0) however tank bred Angels are far hardier and more adaptable than their wild cousins.

While both Cichlids and Goldfish are usually rough on substrate rooted plants Angelfish not only avoid digging but lay their eggs on Amazon Swords and other broad leaves plants when breeding!

Gourami range in size from the 2 inch Dwarf and Honey Gouramis to the 3 foot monster Giant Gourami. All are found in South and East Asia and are partial air breathers because they are found in slow moving or stagnant waters low in oxygen.

Bettas and Paradise Fish are in the same family and can be considered species of Gourami. Both also are partial air breathers and like most Gourami, build bubble nests to raise eggs and fry within.

Some of the best Goldfish tank mates include the large yet peaceful Pearl and Moonlight Gouramis as well as the vibrantly colored Dwarf Gourami for smaller community aquariums.

With so many different species of Gouramis out there you might take a look at my guide to 13 Popular & Beautiful Types of Gourami! All are carnivorous and eat mostly tiny invertebrates in the wild.

Corydoras are actually a genus of several dozen closely related armored catfish native to South America. With their cute seemingly smushed faces, schooling behavior, and willingness to actively swim in the open they are popular for good reason!

While several are on the small size Corydoras have both tough scales and fin spines to ward off predatory fish. They are mostly bottom feeders but usually learn to grab food from the surface and water column when Goldfish and other eager eaters start leaving them hungry!

Giant Danio are the largest member of the mostly tiny Danio family. Swift swimming and incessantly active they are middle to upper water column dwellers that provide plenty of dither activity.

Giant Danios are more subdued in color, with pale orange and blue tones but are certainly beautiful, especially when kept in a school. Given their size and activity level Giant Danios should be kept in aquariums at least 40 gallons in size, if not larger.

Beware of their skittish disposition! When removing an aquarium hood and performing water changes or decoration adjustments Giant Danios may leap in fright, ending up in an even more stressful position on the floor.

So long as you intend on keeping tropical fish along with Goldfish you’ll need a heater that’s precise and stable to avoid going too cold or too warm. I prefer shatter-resistant submersible heaters like the Orlushy Submersible Aquarium Heater! 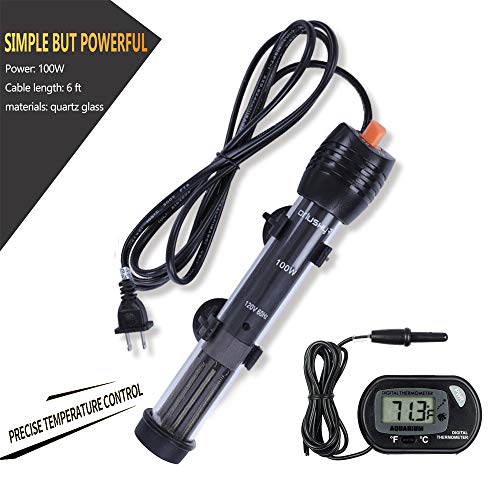