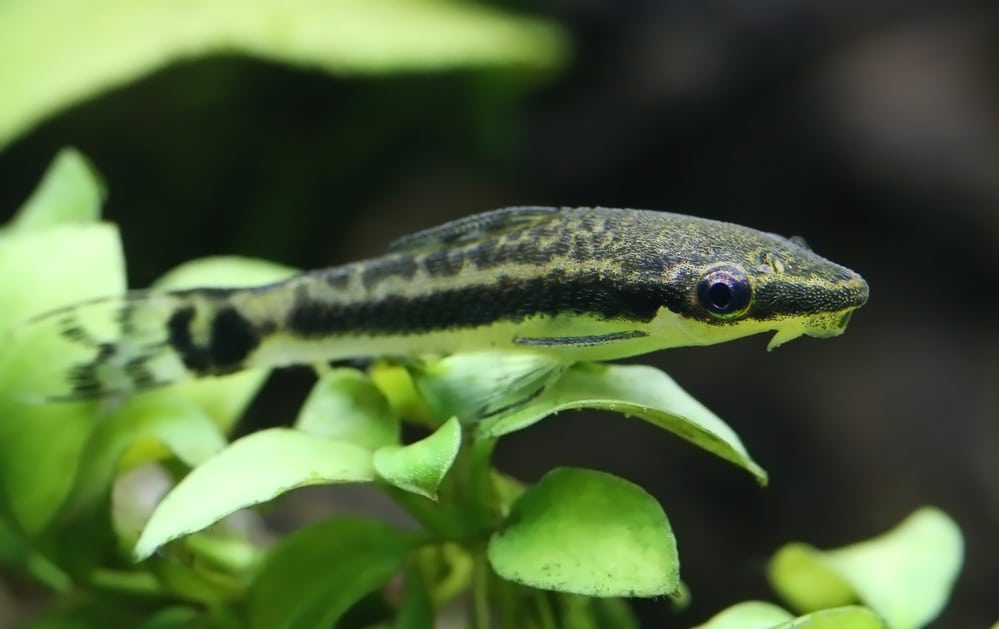 While Plecos and Snails tend to get most of the attention when we talk about algae eaters there are a number of other options for your aquarium! Otocinclus are more popular than ever and are some of the best algae eaters for small aquariums.

While not super colorful they more than make up for it in appetite and temperament! Let’s discuss how to care for Otocinclus!

Otocinclus are a genus of tropical fish from the family Loricariidae. Loricariids are better known as suckermouth catfish and include familiar faces like the Common Pleco as well as the more exotic Sailfin, Zebra, and Bristlenose Plecos.

Suckermouth catfish use their adhesive lips to attach to rocks when currents are strong and graze on algae and biofilms that grow on hard surfaces. While a few are more carnivorous the vast majority are vegetarians and detritivores.

Like many other suckermouth catfish, Otocinclus are known as facultative air breathers. This means while they rely on gills for most of their oxygen needs they can supplement using atmospheric air.

Occasionally, you’ll see your Dwarf Otos race to the surface, causing a brief splash, before racing back to the aquarium bottom. In the wild, Otocinclus are usually caught during the low season.

Their native streams begin to flow sluggishly and have diminished oxygen levels. Schools of hundreds of Otocinclus will continually breathe at the surface, creating a boiling mass of fish that’s simple to scoop up in a single net stroke!

There are actually several species sold in the trade as Otocinclus, Dwarf Oto, etc. Otocinclus vittatus is the fish you will see most often in pet stores. It is one of the larger members of the group and has a bold dark strip with a tan back and white belly.

Other species show up on occasion either intermixed with O. vittatus or sold as specialty fish for experienced aquarists interested in rare fish. The Zebra Oto (Otocinclus cocama) is a Peruvian species that is strikingly patterned and is slowly becoming more common in the trade as Asian fish farms learn how to breed them.

As the smallest suckermouth catfish in the trade, Otocinclus have a lot to offer versus the Common Pleco. You should consider a group or school of Dwarf Otos if:

In this section we discuss everything related to Oto catfish care:

I don’t recommend buying Dwarf Otos the moment they arrive at a pet store. Since they are wild caught they will be just at the end of an immensely stressful shipping process and a number of them will die in the first week.

It’s likely the pet store’s water is also drastically different from their home stream, adding another layer of shock that can result in dead Otos by the time they settle into your aquarium.

Always ask how long a group of Otocinclus has been at the store. If it has been longer than a week then the worst is already over and they are much more likely to thrive in your tank.

As a dwarf catfish, Otocinclus can be kept in aquariums as small as 10 gallons. While aquarists sometimes keep them alone they are schooling fish that prefer being kept in small groups of at least 6 individuals. And more is always merrier for these sociable catfish!

Larger aquariums can hold more, of course, but keep in mind that algae will become more difficult to control unless you either buy a large number of Otocinclus or keep them with other algae eating tank mates.

As tropical South American fish, Otocinclus should be kept in conditions close to their home waters. Since all Otos in the trade are wild-caught, we need to provide waters slightly acidic to neutral in pH (6.0-7.0). They can tolerate slightly alkaline conditions (7.5) but do much better with a lower pH.

One day, we will likely have captive bred Otocinclus that thrive in a wider range of water conditions. Until then, we should strive to keep ammonia, nitrite, and nitrates as close to 0ppm as possible. While they aren’t especially sensitive they are wild caught fish and grew up with much cleaner water than some aquariums contain.

Unlike Plecostomus and some other algae eaters, Otocinclus are entirely plant-safe. They are especially good at removing algae from the delicate leaves of plants like Madagascar Lace Plants and Java Moss. Larger algae eaters tend to ignore these plants entirely in favor of broad grazing surfaces.

Additional hard surfaces like rocks, driftwood, and of course, aquarium glass, are perfect for fostering algae and biofilms in an Otocinclus tank.

Unlike some other Plecos, Otocinclus don’t actually eat waterlogged Driftwood but will spend a lot of time there as their cryptic coloration matches the wood grain perfectly. Driftwood is also an organic decaying surface that slowly releases nutrients and is perfect for accumulating biofilm.

Algae is the main component of the diet of wild Otocinclus, along with bacteria and other microorganisms that form the biofilms that accumulate on surfaces in nature.

If your aquarium is large and productive enough you may end up doing little supplemental feeding. However Dwarf Otos are so tenacious at grazing you’ll likely need to provide additional food once they’ve polished off most of your algae.

Ensuring your Dwarf Otos get enough vegetable matter is critical. While they will eat fallen flakes and pellets these items are usually based on fish or shrimp meal formula with corn and other grains as a filler and thus higher in both protein and carbohydrates than they need.

Instead they should be feeding on algae and biofilms with occasional offerings of blanched vegetables such as spinach, cauliflower, and cucumber. If you want to keep prepared foods on hand, choose a Spirulina-based vegetarian flake or sinking wafer formula like Hikari Algae Wafers. 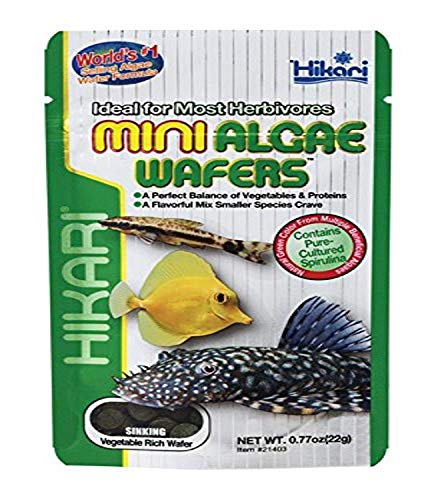 You can and should supplement their diet on occasion with regular flake food for the protein boost (when grazing in nature they are also feeding on tiny invertebrates and worms). Otocinclus will also go after Brine Shrimp, Bloodworms, and Tubifex that reach the bottom.

Dwarf Otos are model aquarium residents. As peaceful, schooling vegetarians, the only thing they threaten is algae and other biofilms that grow in most tanks.

They also don’t have the bad habits of their larger Plecostomus cousins, such as rasping mucus from the sides of broad bodied fish or knocking over decorations.

Otocinclus are the best algae eaters to pair with peaceful blackwater fish like Discus, Cardinal Tetras, and Boraras. So long as you account for their preferences for neutral to slightly soft pH they can also be kept with any community tank fish or invertebrate that won’t try to make a meal of the tiny catfish.

Dwarf Otos are guaranteed not to have a problem with the other fish in your aquarium. However, you’ll need to ensure you choose species that won’t harass or eat them…

Breeding Dwarf Otos is not as easy as breeding Guppies but it’s not especially difficult, either. The key is to provide the right numbers and conditions and I’ll lay out the specifics below!

Otocinclus are some of the hardest fish to sex because they have identical color patterns and are almost the same size. However, there are a few ways to help ensure you get both males and females in your group.

Once mostly mature, females are slightly larger but noticeably heavier bodied than males. And when they begin to swell with eggs they look like little tadpoles. Males are slimmer and slightly smaller. Healthy males will also compete to be near large females, pushing each other aside and chasing her around the aquarium if conditions are right.

The key to successfully breeding Dwarf Otos is providing them with an ideal habitat. So far they have only been bred in planted aquascapes, with warm temperatures, soft to neutral water, and plenty of algae to graze.

pH should fall under the ideal range (6.0-7.0) and temperatures need to be high (78-84F). Offering a variety of supplemental foods like the ones listed above also conditions them for breeding.

Since they live in schools of hundreds of individuals in the wild, numbers are the last key to breeding. A group of 3 is unlikely to spawn. 6 Otocinclus stand a better chance but 12 is even better. Make sure your male:female ratio is at least 1:1 with no less than 3 females in the aquarium. More males is entirely fine as they are competitive but unaggressive fish.

In the wild Otocinclus typically spawn at the beginning of the rainy season. A massive 50-75% water change can induce spawning in happy, well conditioned Dwarf Otos. Ensure the water you add is closely matched to their current conditions in terms of pH, hardness, and temperature, however, to avoid shocking your fish to death!

Once you’ve provided ideal conditions nature will take its course. Female Otocinclus will begin to fatten with eggs and the males will become increasingly active as they try to remain near her until she signals her readiness.

Unlike many fish Otocinclus will breed at any time of the day, relying on their cryptic coloration and sheer numbers to protect them. They lay their eggs directly on the leaves of small and broad leaved plants rather than scattering them into weedy tangles or within caves like other Loricariids. Dwarf Otos also do not guard the eggs until hatching.

Breeding is a wrestling match and a race for these catfish! A group of males will chase the female once her hormonal signals let them know it’s time, pushing each other aside and trying to be first to the eggs.

Eventually, she will choose a leaf as hidden from view as possible and deposit 3 to 5 eggs there. The closest male will immediately clasp himself around her body while fertilizing them. A female may deposit anywhere from 20 to 60 eggs in the course of a breeding event.

Otocinclus especially happy with their conditions may spawn once a month! Fortunately there is a very good market for captive bred Dwarf Otos so you should have no trouble auctioning them or selling them back to your local fish store.

The hardest part was creating conditions suitable for spawning. Raising the young Dwarf Otos is relatively easy. Like their parents they feed on biofilms even when newly born. You can supplement their diet with Infusoria and other microorganisms as well.

However any aquarium that has enough algae and biofilm to breed Otocinclus should have plenty for the fry to forage on. Baby Otos will also feed on blanched vegetables and sinking prepared foods, same as their parents.

Adult Otocinclus won’t disturb their eggs nor fry and can be kept together in the same aquarium. The young grow quite quickly and will be almost fully grown within 3 to 4 months!