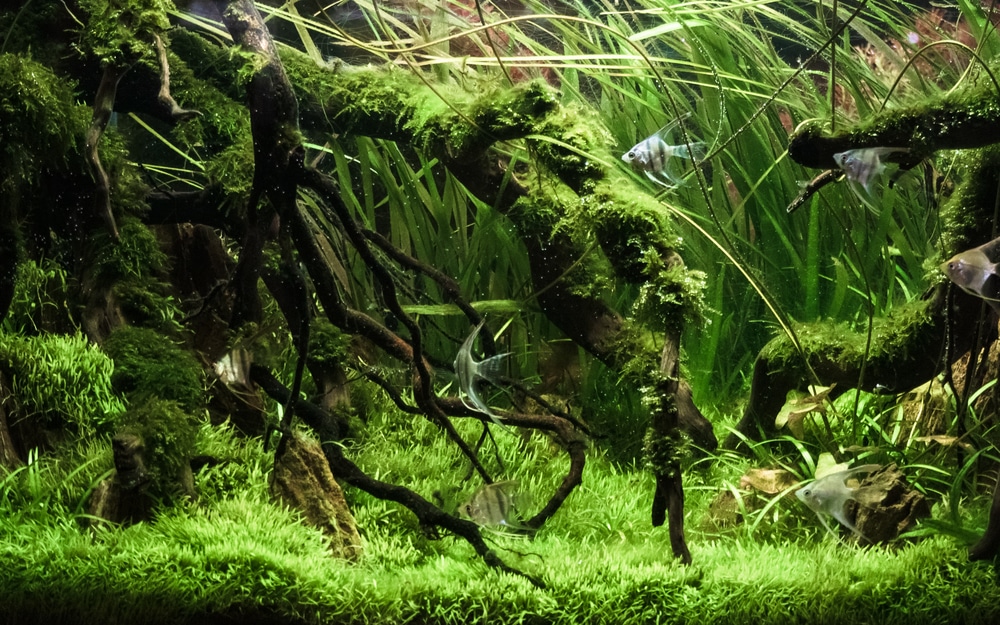 Planted aquascapes take a lot of knowledge and patience to put together. And once your plants are thriving and water parameters are exactly where they need to be adding fish can be the step that throws things out of balance.

Many fish are too large, create too much waste, or simply love to eat or tear up aquarium plants! It’s better to carefully consider the best aquascaping fish before stocking your planted setup.

Qualities to Look For in Aquascaping Fish

Selecting fish for carefully aquascaped aquariums isn’t always as simple as going to you local fish store and picking out whatever catches you eye.

Here are a few qualities that you should look for when choosing fish:

The vast majority of fish used for planted aquascapes are on the small end of the spectrum. Schools of 1 to 2 inch Tetras, Danios, and Rasboras work well because they provide a burst of color while having no impact on plants beyond a bit of extra CO2 and nitrogenous fertilizer.

Small fish are also less in competition with the design of your aquascape for the viewer’s attention. Hence modest schools of 1-inch Neon Tetras are regularly kept even in 100+ gallon Nature and Iwagumi-style aquascapes, which place a ton of focus on the placement of plants, rocks, and substrate.

Planted aquascapes tend to be either community tanks or aquariums dedicated to a single species of fish. Both schooling and solo fish can be kept together. In fact, I recommend it, as schools of small fish soothe the anxieties of solo species by acting as dither fish.

However schools of small fish help give a planted aquascape a busier feel if that’s the aesthetic you’re aiming for. And they have the least impact on the bioload and nutrient cycles of the tank.

Larger fish sometimes bring in bad habits like digging and uprooting them (Goldfish, Cichlids, Catfish especially) or may simply find plants delicious. Choose fish that are small, mostly carnivorous, and spawn by scattering eggs. Nest builders sometimes collect plant leaves or dig into the substrate, which can disturb plant roots.

Here are a few of our favorite aquascaping fish species:

Tetras regularly top most lists of the best aquascaping fish because they have all of the qualities we’re looking for. They are nearly all carnivorous, small, schooling, and have bright colors that nicely complement the greens, dark reds, and browns of an aquascape.

There are dozens of species commonly found in the trade and hundreds all over the world. The vast majority come from South America, with a few African species like the Congo Tetra (Phenacogrammus interruptus) available on occasion.

As a group Tetras prefer soft, acidic water (pH 6.5 to 7.0) and temperatures on the warmer side (75-80F). Tank bred species like Neon Tetras are very flexible however providing these conditions results in not only good health but potential breeding!

Rasboras fill the same niche as Tetras in Asia: small, schooling fish that feed on tiny prey items. They are Cyprinids which makes them close cousins to Barbs, Danios, and Goldfish.

The Chili Rasbora (Boraras brigittae) is especially dear to blackwater aquascapers (pH 4.0-5.5). At less than an inch in length they are perfect for nearly any aquarium size. Yet they never fail to attract attention thanks to their vibrant scarlet tones and active disposition.

Since they aren’t as well known as Tetras, Danios, and other small schooling fish, Rasboras often get passed up by aquarists. Which is a shame because they rarely show their best color in aquarium stores.

When placed in planted aquascapes with full spectrum light, plenty of cover, and dark substrates they take on rich red and purple tones. And when male Rasboras display for the attention of females they become even more vibrant!

Guppies, Platies, Swordtails, and Mollies do just as well in planted aquascapes as they do in community aquariums. Live plants also offer their babies a better chance to survive, especially if you keep weedy plants like Java Moss or Micro Sword Plants.

Mollies should be treated with caution, however. They will eat soft bodied plants like Elodea as well as macroalgae. And their need for salt may not work for many freshwater plants.

Livebearers as a whole also prefer neutral to slightly alkaline water conditions (pH 7.0-8.0). Aquascapes with limestone, Seiryu, and other stones rich in carbonate and minerals help maintain conditions to their liking!

Gouramis are available in nearly every aquarium store. Having been in the hobby for decades most species also come in several color morphs, from Electric Blue Dwarf Gouramis to albino Honey Gourami.

Chocolate Gourami are often kept in planted aquascapes as they are plant safe, delicately patterned, and being on the sensitive side, do best in carefully controlled environments. However nearly all small to medium sized Gouramis and Bettas are plant safe.

Gouramis prefer warmer temperatures and little to no current. Males tend to be territorial but only Bettas and Paradise Fish take this to lethal extremes.

While most Cichlids will wreck your carefully placed plants and substrate some are excellent fish for aquascapes. Specifically, Dwarf Cichlids! The Blue Ram is not only easy to find but hardy and willingly breeds in planted aquariums.

Apistogramma are a genus of South American Dwarf Cichlids that get along well with all but the tiniest of fish and shrimp. Dwarf Cichlids do dig on occasion, especially when preparing to spawn. However they keep their destructive habits to a minimum.

And so long as they are kept in fairly spacious aquariums (30+ Gallons) their tank mates can avoid the increased aggression Cichlids display when guarding eggs and fry.

Angelfish and Discus are exceptions to the general rule of avoiding medium to large Cichlids. Both are found in blackwater environments in the Amazon basin where they school together and dart among flooded tree roots and water weeds.

They have tiny mouths for plucking at invertebrates and small fish which keeps them from digging and tearing up plants. Discus and Angelfish preferentially breed on the leaves of Amazon Swords and other broad leafed plants, making them model citizens for planted aquascapes.

It’s a shame Killifish aren’t more popular in the aquarium hobby. A few species show up on occasion, including the American Flagfish and Striped Panchax. However some, such as the various Nothobranchius species, are as boldly colored as reef fish, and far easier to care for!

Killifish are plant safe and peaceful towards other fish. A few are territorial and males compete viciously for females but never do each other lasting harm.

Many Killifish can be challenging to feed, especially annuals, as they sometimes don’t recognize prepared food. They prefer frozen and live prey like Daphnia and Brine Shrimp but can be trained to eat prepared food if raised on it.

Planted aquascapes also offer the best chance to breed Killifish. They tend to be either egg scatterers (non-annual), egg depositors (annual), or a mixture of the two categories (semi-annual). I go into much more depth into their care in my Complete Guide to Killifish!

When you think of Catfish the image of a large, chunky, slow moving bottom feeder usually comes to mind. However, several of the smaller species are some of the best aquascaping fish for the bottom of the aquarium.

Corydoras are peaceful, sociable, and attractively colored. Most are fully grown at around 2 inches and their habit of perching on driftwood and plants makes them even more endearing. Corydoras accept most prepared foods however you should ensure it’s sized appropriately and sinks quickly enough for them to get their fair share.

Otocinclus are ideal for planted tanks in need of algae control. Unlike Plecostomus, Dwarf Otos don’t grow larger than 2 inches and won’t eat soft leaved plants. Otos are also sociable and prefer being kept in groups of at least 6 individuals – when kept singly they tend to hide constantly.

Since the best aquascaping fish tend to be small Freshwater Shrimp make perfect tank mates for them. Shrimp are voracious algae eaters yet do no harm to plants. Others, like Bamboo Shrimp, are filter feeders, picking out fine particles of plankton or powdered flake food from the water column.

Freshwater Shrimp can also be kept in shrimp-only aquariums. Some, such as the sensitive Bumblebee Shrimp (Atyopsis moluccensis) have exacting needs in terms of water hardness, temperature, and pH.

Bee Shrimp are also so small that even normally peaceful fish may find them tempting targets. However they get along great with other Caridina Shrimp as well as Amano and even Ghost Shrimp.

Snails should always be considered with caution. Some species will breed out of control, especially Ramshorn Snails. Others are easier to manage but tend to eat fresh plants if decaying vegetation and detritus runs low.

However, Assassin Snails are great additions to the planted aquascape. For one, they are entirely carnivorous and will eat protein-rich prepared foods, scraps of meat, and frozen food. If you already have problem snail populations Assassin Snails will eventually reduce or eliminate them as well.

Nerite Snails are algae eaters that have especially attractive shells with bold stripes, rich colors, and even spikes. Nerites also can’t breed in freshwater aquariums because the young have to grow up in saltwater, thus keeping them from becoming a nuisance.