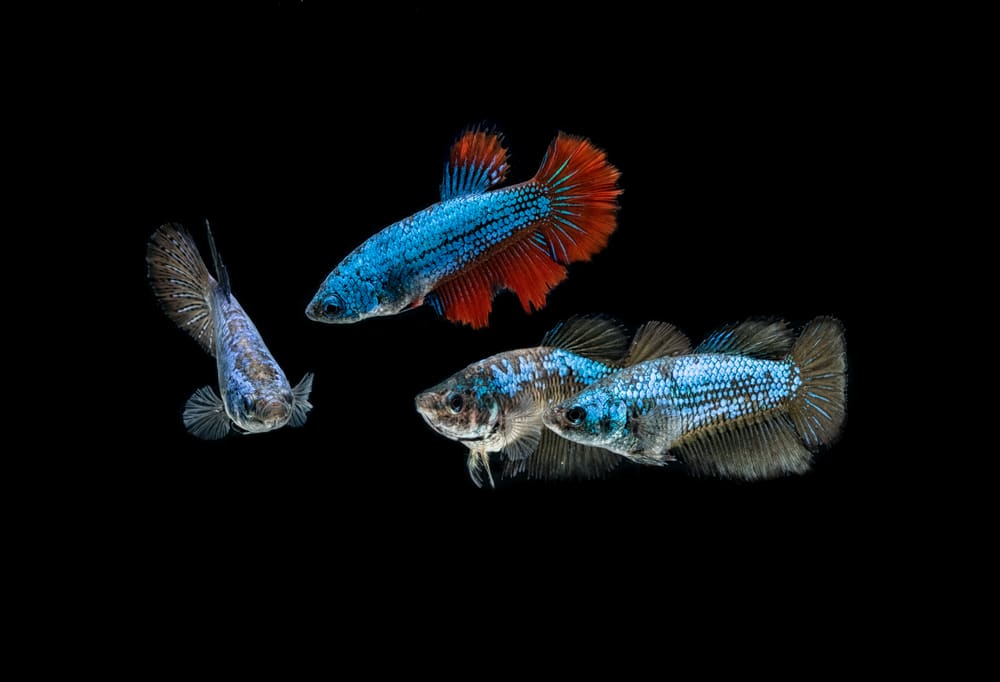 Siamese Fighting Fish, or Bettas, are infamous for being aggressive and intolerant of one another. The prevailing wisdom has always been one Betta per aquarium, unless you want one or both fish dead!

There is a fair amount of truth to this…When talking about male Bettas. As it turns out, female Bettas are much more tolerant and willing to coexist.

This has sparked a recent interest in Betta Sororities: aquariums dedicated to a mixture of female Bettas living in harmony!

But what is a Betta Sorority and how do we set one up for ourselves?

What is a Betta Sorority?

Male Bettas, with their brilliant colors and flowing finnage, get most of the attention when it comes to fish keeping. Female Bettas are rarely seen and are usually small, drab, and purchased for breeding purposes only.

However the simple truth is that female Bettas can be show-stoppers on their own. While not as dramatic in appearance as male Bettas they still come in all color varieties, from vivid scarlet to white and black panda patterns.

And most importantly for our Sorority, female Bettas are significantly less aggressive than males, which have been bred for centuries to viciously attack other males (and occasionally females) they come across.

The trick to an all-female Betta Sorority is managing the aggression of females through numbers, space, and decorations!

How Large of an Aquarium Do I Need?

Female Bettas are fairly small, reaching 2 to 3 inches at full adulthood. However we need a handful to keep any one female from dying if she becomes the lowest member of the pecking order.

The reason we start with a medium number of fish is because any less and one fish has an increased risk of becoming the social outcast. The more fish you have, the more aggression is spread out among the group.

Instead of a clear pecking order the females will be mostly content to wander and occasionally peck at each other with no lasting harm done. Larger aquariums also facilitate this – when cramped in a small tank where constant face-offs occur, your Betta Sorority is less likely to succeed.

Managing Aggression through Decorations in a Betta Sorority

Smart decorating is also critical to the success of your Betta Sorority. Constant breaks in line of sight help females forget about the competition and go about their business in peace.

Use tangles of driftwood, live plants, and rocks to allow fish to find peaceful nooks, explore, and otherwise be distracted from each other. There are few situations worse for Bettas than bare tanks with nothing else to do but look at one another – their innate aggression is bound to seek expression.

Thick, weedy plants midwater and surface like Hornwort, Elodea, and Hydrophila are perfect for Betta Sororities. They provide tangled mazes of undergrowth that the fish can navigate without seeing one another and also perfectly replicate the overgrown ditches and rice paddies they are native to in Southeast Asia!

Tangled plant masses are also the natural breeding ground for Bettas; they provide a secure place for males to build and anchor bubble nests.

If aggression does arise and a single female starts to be bullied usually it’s because one of your females has become dominant in the hierarchy and the weakest female can’t escape her attention.

You have a few options in this situation:

Caring For for a Betta Sorority

Female Bettas are just as hardy as males. However, neither should never be kept in unheated, unfiltered bowls or tanks! I cover this topic extensively in my Q&A on Betta Fish and Filters!

A modest heater and filter is all that’s required. I prefer hang on the back style filters because they provide good surface agitation, boosting dissolved oxygen content. However Sponge Filters offer a number of benefits and work nicely for Betta Sororities.

We want to provide slow moving, heated water similar to their Southeast Asian homes. Temperatures from 78-84 are ideal, with the lower 70’s well tolerated but placing them at risk of diseases like Ich and Popeye.

Bettas are 100% captive bred and can tolerate a wide range of pH conditions but prefer soft, slightly acidic to neutral conditions (pH 6.0-7.0). Ammonia, nitrite, and nitrate should be as close to 0ppm as possible but Bettas are quite hardy and will tolerate elevated levels for a long time with little outward distress.

If you keep live plants in your Betta Sorority they will feed on excess ammonia, nitrite, and nitrates while providing natural habitat and boosting oxygen concentrations. Keep in mind this is true strictly of actual aquatic plants, not Spider Lilies and other “Betta Bowl” terrestrial plants.

Feeding Bettas is just as easy as they will accept a wide range of prepared, frozen, and live prey options! Do keep in mind that whole foods like Bloodworms and Tubifex often contain higher levels of carotenoids and other pigments that boost fish colors!

A Betta Sorority is a wonderful departure from traditional Betta setups with a single male! The females are personable, actively social, and nearly as colorful. Not only are they hardy and undemanding female Bettas also welcome other community residents, including Livebearers, Tetras, and Barbs without issue. Think about trying a Betta Sorority in your next aquarium setup!