Fancy Goldfish come in hundreds of varieties today. However, the Ranchu is one of the oldest, most popular, and instantly recognizable breeds around.

What makes the Ranchu so special and why should you consider adding one to your Goldfish tank or pond?

What are Ranchu Goldfish?

The Ranchu has a unique story in the goldfish world. All goldfish have their origins in ancient China, where bright colors were selected for in outdoor ponds. The Ranchu, however, is a Japanese breed. Their exact origins are shrouded in mystery however they first enter the historical records around 1648.

Goldfish imported from China were selected for several traits besides coloration: a squared head, thick back, no dorsal fin, and a horizontally spreading double tail. These characteristics are part of the “view from above” aesthetic cherished by Japanese breeders. Classic Japanese Ranchus still exemplify this look.

Eventually, Ranchus found their way over to China and Thailand in the 1980’s. By this time, aquariums were much more common. Breeders then began to select for side-viewing pleasure. Arched backs and tails that are more vertically visible are the main characteristics of these later Ranchu breeds.

The vast majority of Ranchus on the market have highly mixed parentage. Unless you’re buying from a goldfish breeder there’s no way to tell if you have a pure Japanese, Chinese, Thai, or other Ranchu. Fortunately, they all have identical care requirements!

In this section we cover everything you need to know about keeping Ranchu goldfish.

There is a lot of misinformation out there surrounding aquarium size and fish care. Especially goldfish because people still believe that they only grow to the size of their aquarium, which is false. They may become cramped and dwarfed slightly but they won’t stay tiny.

Ranchus can grow anywhere from 6-12 inches, same as any other goldfish. In an outdoor pond they can even grow up to 18 inches long and a few pounds in weight over the course of decades. All of this variation depends on the age, sex, diet, and genetics of the fish.

Like all Goldfish, Ranchus love to root around and make a real mess. So give your Ranchu as much room as you can to keep the water quality from deteriorating too quickly!

Goldfish as a group aren’t super picky when it comes to water quality. They do prefer neutral to slightly alkaline parameters (pH 7.0-8.0) but thrive and even breed in slightly acidic conditions as well.

Temperatures are much more important. As temperature fish, Goldfish shouldn’t be kept much warmer than 75℉, with cooler always being better. Goldfish can also thrive outdoors and even overwinter under the ice.

However, fancy Goldfish like Ranchus prefer being kept around room temperature. Also they sometimes have trouble acclimating to the outdoors if they’ve been raised in stable tropical conditions. If introduced gradually, they should be fine outdoors. However a sudden cold snap can kill a sensitive Ranchu.

Keeping ammonia, nitrite, and nitrate levels as close to 0ppm is important for all fish but especially for fancy Goldfish like Ranchus. Unfortunately, in order to get these traits in Goldfish, they are inbred for several generations.

This lack of genetic diversity leaves them weak and susceptible to infections. Ich, velvet, fin rot, and other diseases are common if kept in dirty conditions. Ranchus may even show black patches if ammonia levels are chronically high.

Goldfish and plants can be a difficult subject. Goldfish love to dig and they love to eat plants, especially soft types like Elodea and Cabomba. Most plants simply won’t do well being disturbed and nibbled by your ever-hungry Ranchu.

However, epiphytes like Anubias, Java Fern, and Java Moss are ideal for Ranchu aquariums. Instead of rooting in the gravel they attach to hard surfaces like rocks and driftwood. They are also tough, bitter, and capable of growing without specialized aquarium lighting. They don’t even need added fertilizer or carbon dioxide, though they do better with them.

If keeping your Ranchus in an outdoor koi or container pond, you can try other fast growing plants like Hornwort and Cabomba. These grow fast enough to take some nibbling and disturbance. Both plants also don’t mind floating if uprooted.

You can choose your favorite substrates between gravel and sand for Ranchus. Either one works wonders, though sand can sometimes be a hassle if your Ranchu decides to leave little piles everywhere. Gravel tends to stay neater in appearance for much longer.

While they do grow large and tend to bumble about the tank, Ranchus are very peaceful community dwellers. The only real challenge is finding fish that won’t bully them and enjoy cooler temperatures as well.

Chinese Hifin Sharks are distant relatives to Goldfish that look stunning when young but eventually grow large, plain, and somewhat ugly. However they are fantastic algae eaters for outdoor ponds alongside Koi Carp and Ranchus.

The worst tank mates for Ranchus are aggressive, territorial fish and high temperature tropical fish (75℉+). Cichlids like Oscars and Green Terrors will gladly bully a Ranchu, which has no teeth or temper to defend itself with. Even small Convict Cichlids will make life difficult for a Ranchu.

Tetras, Angelfish, and other high temperature tropicals are also a poor match. They prefer their water around 80℉ or warmer, which is stressful for Goldfish.

Lastly, I don’t recommend most algae eating fish. Plecostomus, Chinese Algae Eaters, and the like commonly attach themselves to big, slow moving fish like Ranchus to slurp off some of their nutritious slime coat.

Feeding just might be the easiest part of Ranchu Goldfish care! All Goldfish are hearty omnivores that need both plant and animal matter in their diets. It’s a good idea to keep a wide variety of items on hand but always stick to a base of prepared flakes or pellets. 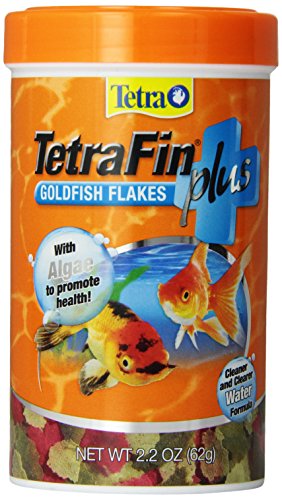 I recommend choosing prepared blends that contain a high proportion of both plants and animal fare on the label. Tetra Fin Plus uses both algae and fish meal to give Ranchus the variety omnivorous fish need.

From there you can supplement their diet with worms, insects, fresh and frozen foods like bloodworms or tubifex, and blanched vegetables like zucchini and spinach! Your Goldfish will eat just about anything they don’t have to chew.

In common Goldfish, the female is typically a bit plumper and much more so when it’s time to spawn. But Ranchus are plump 365 days of the year, male or female!

The presence of breeding tubercles is the most reliable way to tell. When mature (at least 1 year old) and ready to spawn, male Cyprinids (Carp, Barbs, Danios, etc) develop raised bony tubercles on their gill covers and sometimes even their faces.

It’s not 100% accurate as young males sometimes fail to grow them and females may show a few on occasion. But in general, if you see a Goldfish with breeding tubercles – and that Goldfish is chasing other Goldfish around – it’s likely you’re looking at a male Ranchu! 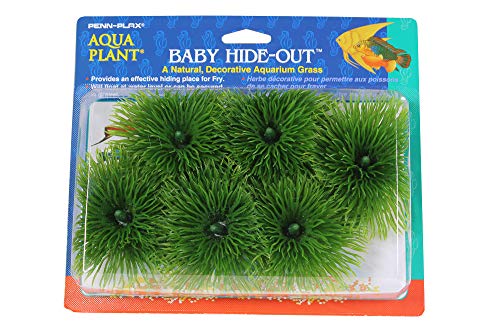 Like all Cyprinids, Ranchus are egg scatterers. Once the male and female retreat to a patch of dense plant cover, they release their gametes (eggs and sperm) into the water. These eggs are sticky and adhere to the first thing they touch.

Within 48-72 hours the eggs then hatch and the fry sink to the bottom until they’ve absorbed their yolk sac. Once they’ve done so, they are capable of feeding on infusoria and green water algae. Within a few days, they grow large enough to eat brine shrimp nauplii.

It’s best to either raise baby Goldfish in an outdoor pond where they can avoid their parents or remove the plants your Ranchus have spawned on.

Goldfish aren’t dedicated parents and will simply eat their eggs and fry if they find them later!