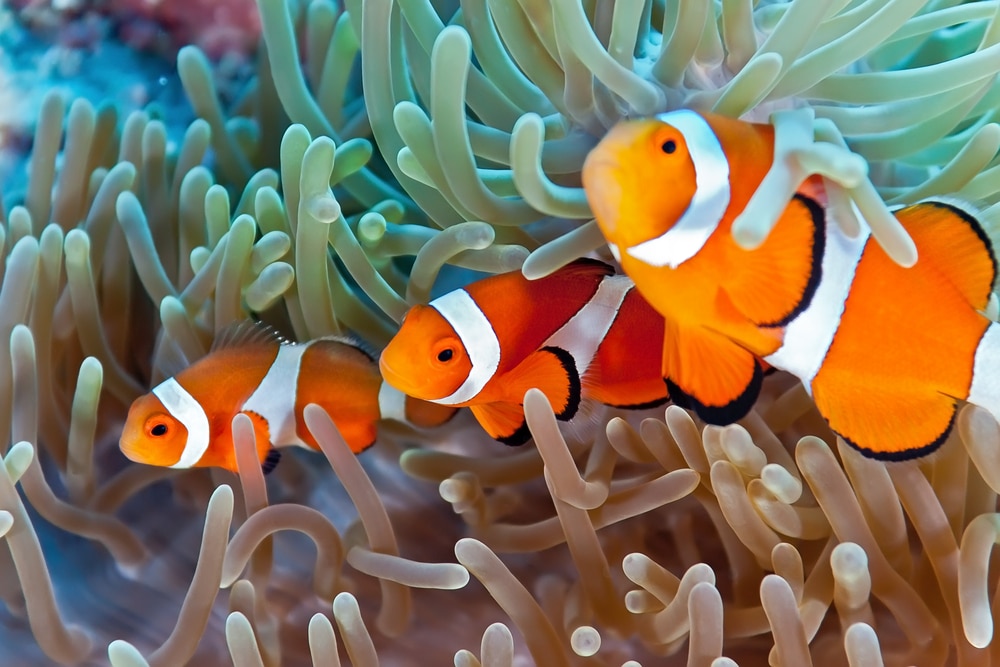 Clownfish are one of the most iconic and popular fish in the saltwater fishkeeping hobby – thanks, Nemo!

What many people don’t know, though, is that there are actually many different types of Clownfish. In this guide, we cover the basics of keeping Clownfish as well as a few of the most popular clownfish species in the hobby.

While there are dozens of types of Clownfish with hundreds of color morphs, here are some of the most common species, representing each of the six Clownfish Complexes.

Also known as the False Percula, Common Clownfish are some of the most frequently seen fish in the marine aquarium trade. Like all types of Clownfish, the females are slightly larger, reaching up to 4 inches, with males maxing out at around 3 inches.

Found in shallow reefs in the Eastern Indian and Western Pacific Oceans, the Common Clownfish has a distinctive wobbling style of swimming that makes them a darling of the pet world.

If you’re looking for a Nemo for your aquarium, the Common Clownfish is your best choice. They are hardier than Percula Clownfish and less expensive. Common Clownfish also come in more color varieties and are readily available as healthy, captive bred juveniles.

While not found in the same regions they are the only members of the Percula Complex and thus are closely related. Common and Percula Clownfish will even interbreed if given the chance.

The Orange or True Percula Clownfish are the smallest and one of the most sought after types of Clownfish. Percula are found in a relatively small range in nature, around New Guinea and Northeastern Australia. Their rowing pectoral fin motions are adorable and give them a waddling appearance as they swim.

While all Clownfish are territorial to a degree, Percula Clownfish are one of the milder species, even as adults. Being so mild-mannered, keeping them with an appropriate anemone gives them a place to retreat when harassed by semi-aggressive tank mates.

Color variations are expansions on the amount of orange, white, and black found on the body. Several color morphs are found in nature, including all Black Percula Clownfish.

True Percula Clownfish are sensitive to poor water conditions compared to other Clownfish. Water changes should be regular and testing done frequently to keep them in optimal health. If ammonia and nitrites are allowed to spike, their immune systems will suffer, opening them to infections from Clownfish Disease (Brooklynellosis) and Marine Ich.

Also known as the Fire Clownfish, Cinnamon Clownfish are one of the larger species. Like most of the Tomato Clown complex, they can reach up to 5 inches. Their size and semi-aggressive nature makes them a good choice for fish-only community tanks.

When young Cinnamon Clownfish are a burnt orange color. As they mature the flanks turn increasingly black, with orange trim on the face, belly, and tail.

Like most damselfish, Cinnamon Clownfish grow increasingly territorial as they mature. When kept in a sparsely aquascaped aquarium they tend to claim the whole tank as their territory, causing problems for mild-mannered residents.

Their aggression can be contained somewhat if given live rock and a host anemone to defend.

Cinnamon Clownfish are especially aggressive towards other Clownfish and should not be kept in groups or with other types; a pair or single individual is best.

Like their close cousin the Cinnamon Clownfish, Tomatoes are large, boisterous Clownfish that you’ll need to keep an eye on as they mature. They are found in the Western Pacific Ocean from Japan down to Indonesia.

These are one of the most common and inexpensive types of Clownfish in the trade and a great choice for a semi-aggressive community tank. Triggerfish, Tangs, Damselfish, and Angelfish work well with full-grown Tomato Clownfish.

Tomato Clownfish are one of the pickiest types when it comes to anemone selection. They are found exclusively with Bubble Tipped Anemones (Entacmaea quadricolor) in nature but can sometimes be induced to accept Leathery Anemones (Heteractis crispa).

As large, eager eaters, they tend to intimidate shy tankmates. Like all types of Clownfish they happily accept a mixture of flakes and meaty live and frozen items such as Brine Shrimp and chopped Clams.

Maroon Clownfish are the largest type of Clownfish, with mature females reaching up to 7 inches. They are found exclusively in the Western Pacific Ocean, from Indonesia down to Northern Australia.

Maroon Clownfish are famously aggressive when mature. Even with mated pairs, the female may decide she’s in a bad mood and pick at the smaller male relentlessly until he dies. They are intelligent and personable, often recognizing their owners as well as guests, who may get a warning display if they approach the aquarium!

Despite being large and aggressive, Maroon Clownfish are also beautiful, and easy to care for. If they pair successfully they may even breed for you. Given their size, they should be kept in tanks of at least 55 gallons in volume.

Maroon Clownfish belong to their own Maroon Complex. They are a monospecific genus (Premnas) as the Gold Striped Maroon Clownfish is only a variation and not a separate species. Maroon Clownfish are easy to identify as they have a deep red color and a prominent cheek spine not seen in other types of Clownfish.

However they are most closely related to the Percula Complex and have been bred with the Common Clownfish in captivity. The resulting young are known as Blood Orange Clownfish due to their intermediate coloration. They are also larger and more aggressive thanks to their Maroon Clownfish genetics.

Clarkii Clownfish are widespread both in the aquarium trade and in nature. Found throughout the Indian and Western Pacific Oceans, they come in a diverse array of naturally occurring color morphs, from pure black with white bands to nearly entirely orange and white.

While they are a larger type of Clownfish, Clarkii aren’t nearly as aggressive as Maroons or any of the Tomato Complex. They will give most tank mates space, save the immediate area around their anemone. Aggression can be compounded if kept in smaller tanks, however.

Inexpensive, hardy, and not too aggressive, Clarkii Clownfish are an excellent first Clownfish for the saltwater aquarist with a medium sized tank!

Pink Skunk Clownfish are unusually patterned compared to their cousins. They have a single vertical bar along the cheek that doesn’t quite reach the white stripe along their back. Their light pink to peach color is also different from the orange to black color of other Clownfish.

They are easily bullied and will fall ill due to stress. Pink Skunk Clownfish are also very sensitive to water conditions and won’t tolerate sudden changes in water parameters or spikes in ammonia or nitrites.

As their name suggests, Saddleback Clownfish have a unique stripe pattern, with the second bar forming a saddle shaped mark starting below the dorsal fin but not always meeting the belly. They are fairly widespread, found across the Western Pacific Ocean from Southern China to Australia.

Unlike most types of Clownfish, Saddleback males are the same size as females, with both reaching a respectable 4 to 5 inches. Saddleback Clownfish tend to stick very closely to their anemone, with the Saddle Carpet Anemone (Stichodactyla haddoni) vastly preferred over other species.

Saddlebacks will also share their anemones with each other, forming family groups that result in a single breeding pair dominant over several asexual relatives. While larger than their relatives they can be kept with smaller, peaceful Clownfish like Percula and Skunk Complex types.

Clownfish are specialized reef dwellers in the family Pomacentridae. Many Pomacentridae live in small groups but all are territorial and aggressive to a degree, choosing a group of coral or rock as a focus for their territory.

Clownfish are special because unlike their Damselfish cousins they don’t spend much time in open water. Instead, they find and bond with sea anemones, invertebrates related to coral and jellyfish.

At first, living within a sea anemone seems like an unusual, even suicidal choice. Like all Cnidarians, anemones have grasping tentacles with paralytic venom used to subdue and kill small creatures before being slowly engulfed by the immobile anemone.

By living among the tentacles of an anemone the Clownfish is protected from predators. Most are somewhat poor swimmers due to their home body lifestyle, relying on their pectoral fins to weave through tentacles and pull themselves along.

The relationship isn’t one-sided, however! Even the smaller, peaceful types of Clownfish will aggressively defend their host anemone from predators. They will also clean the anemone of debris and drop bits of food into the tentacles or directly into the mouths of their host. This makes their relationship a symbiotic, mutualistic one, where both species benefit.

Clownfish are grouped in a series of six Complexes. Each Complex is a group of closely related species that will usually interbreed with one another. The six complexes are: Clarkii, Maroon, Percula, Saddleback. Skunk, and Tomato.

Do I Need an Anemone?

The short answer is no. While all Clownfish live up to their alternative name of Anemonefish, the vast majority can be kept without one, especially the larger Maroon, Tomato, and Clarkii Complex Clownfish.

Skunk and Saddleback Complex Clownfish, on the other hand, are the most anemone reliant. Normally shy and fairly peaceful, they can be given caves and coral to hide within instead but you’ll rarely see them swimming in open water.

When choosing an anemone for your Clownfish you should know that they are quite selective. There are 10 types of anemone that host Clownfish in nature:

Anemones are challenging because they require moderate current and bright lighting for their symbiotic algae to survive. Many are also sensitive to poor water quality and attacks from fish and invertebrates.

However, the interactions between anemones and Clownfish make the challenges worth the effort. Once adapted to their new home, Clownfish will clean, defend, and even drop bits of food directly into the mouths of their host anemone.

Providing an anemone also gives the aggressive Maroon and Tomato Complex Clownfish a focus for their territory, which keeps them from terrorizing their tank mates across the entire aquarium.