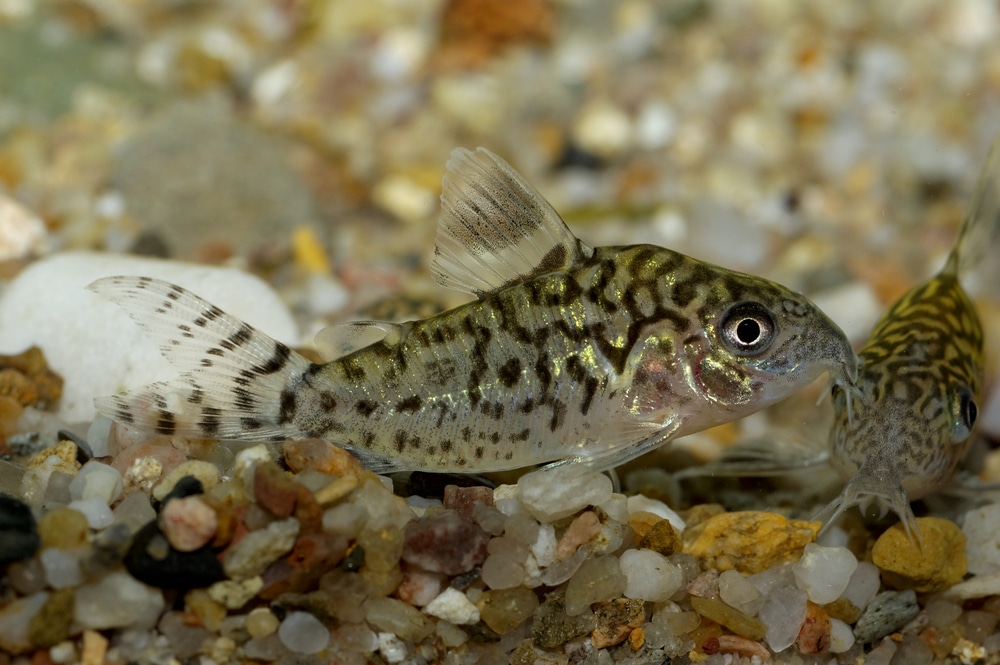 Corydoras are a staple of the freshwater aquarium world and the darlings of thousands of fish keepers around the world. They are small to medium sized schooling catfish that defy the stereotype of a lazy, bottom dwelling fish that hides all day and only eats muck.

Cories are schooling, active, day dwellers that madly dash for the surface for gulps of air, chase each other around, and pause, only to “wink” on occasion as they move their eyes and scan their surroundings. They can even be bred in captivity with a little work, the right water chemistry, and some fancy food! Let’s take a look at some popular types of cory catfish!

Cory catfish come in several sizes, from the tiny Pygmy Cory to the prehistoric looking Hoplo Catfish. There are hundreds of species found in nature but these are the some of the types of cory catfish you’re most likely to run across in a pet store!

One look at a Panda Cory and it’s easy to see how they get their name. The black spots and pale cream background instantly remind you of the bear.

Panda Cories can be a little more sensitive than some of their cousins, likely because there are still a fair number of wild specimens entering the trade. Unless you’re certain you have tank raised cories, you should try to keep your Pandas in acidic to neutral water chemistry (pH 6.0-7.0).

Wild cories also love very warm conditions (75-85℉); cooler temperatures will make them lethargic and increase their risk for fin rot, body fungus, ich, and other opportunistic diseases. Make sure you provide them with several of their own kind as well; a single Panda Cory will spend most of its time hiding and will feel exposed as they are social, shoaling fish.

Peppered Cories are often the first introduction aquarists have into keeping Corydoras. Inexpensive, intriguingly patterned, and highly active, they are excellent first fish for beginners. In fact, they are hardy enough to withstand the rigors of new tank syndrome, and can be some of the first fish to help cycle a tank for future residents.

The Peppered Cory is also very underappreciated when it comes to color. Young specimens and adults kept under bright, stressful conditions are typically grey and cream in color. But there is a faint green iridescence that can become almost a glow when kept in subdued lighting or well planted tanks with several members of their own kind!

These are one of the best cories to begin with because they are very peaceful and breed readily. Live and frozen foods help condition them faster but often they breed even using standard prepared foods and in alkaline waters. Unlike some of their relatives Peppered Cories have entirely adapted to captive aquarium conditions!

At first glance, you might mistake the Emerald Green Cory for the Bronze Cory or other similarly colored kinds. But the elongated nose, chunky body, and brilliant coloration soon makes itself obvious. This fish is one of the more desirable types of cory catfish and even appears on a stamp in Brazil!

Emerald Green Cories are one of the larger cories, growing up to 4 inches. And since they need to be kept in groups to feel comfortable, you’ll want at least a 30 gallon tank for a small shoal of them.

While they are significantly larger, they are similar to their smaller cousins in every other respect. Emerald Green Cories do prefer neutral to acidic conditions but are adaptable to a variety of water chemistries.

Temperatures should remain on the high side as these fish are found right on the equator where river temperatures stay at 78-86℉. Their size, love of acidity and high temperatures make them excellent tank mates for Discus, Cardinal Tetras, and other blackwater fish.

By far one of the most common Corydoras in the hobby, the origins of the Bronze Cory are actually somewhat mysterious! The range of this cory is described as covering most of South America, however it’s more likely that there are several undescribed closely related species of cory that look similar. However, the original cory that was discovered and gives this species its name is from Trinidad. 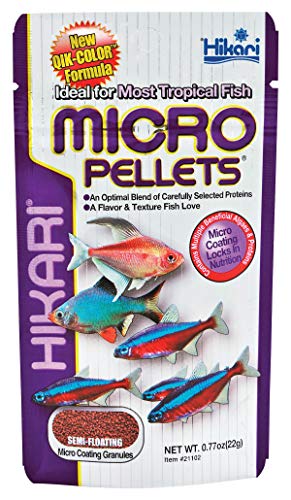 Bronze Cories are extremely hardy and easy to care for. They have been tank bred for generations and accept all kinds of prepared, frozen, and live foods. Small invertebrates like brine shrimp, blood worms, and tubifex will be greedily eaten and are the quickest way to condition them to spawn. But you can also provide flakes, micro pellets, and other foods sized appropriately for their tiny mouths.

Pygmy Cories live up to their name; as true nano fish they are at home even in aquariums as small as 5 to 10 gallons. But what’s most important is that you provide them with plenty of companionship because they will form shoals and swim around, even in the midwater regions where most cory catfish spend little time.

As adults, Pygmy Cories are slightly sexually dimorphic, meaning you can tell them apart by looking. The males don’t grow beyond ¾ of an inch while the females will reach 1 inch in length. The females are also visibly plumper, even when not ready to spawn.

These fish are extremely peaceful and easily intimidated by larger and/or aggressive fish, such as certain Barbs and Cichlids. Even fish that are peaceful but highly active and much larger can frighten them. So stick to other nano fish as tank mates, such as Chili Rasboras, Pea Pufferfish, and similar species!

Sterba’s Cory is one of the most desirable and attractive types of cory catfish thanks to their delicate reticulated patterns and bright pectoral spines. They used to be much more expensive but have come down in price over the years thanks to large-scale farming in Asia and Europe.

While purists looking for wild specimens will be disappointed, it does make buying a school much easier for beginner and intermediate aquarists! Black and albino C. sterba forms are also uncommonly seen thanks to these breeding efforts.

The original wild specimens were fairly sensitive to temperature and elevated levels of ammonia or nitrates. But tank raised fish are much hardier and more willing to spawn even in less than ideal conditions. Buying tank bred fish also takes pressure off of wild stocks, helping to preserve them in nature forever. C. sterbai will thrive even in alkaline water but soft, acidic conditions will lead to better health and breeding responses!

Julii Corydoras are often some of the first fish to greet you when you walk into a pet store. Small, uniquely patterned, and very hardy, these are some of the best fish for beginners. But experts often find them just as appealing for planted aquascapes themed around the Amazon region.

Juliis are one of the smaller types of cory catfish, rarely growing larger than 2 inches. This means you can keep a small group in even a 10 to 15 gallon aquarium. That said, they feel much safer in groups of 6 to 12, making 20 to 30 gallon tanks more practical. Most of the smaller species are much more shy than their 3-4 inch cousins and should be kept in larger groups to ensure you’ll see them out in the open.

Hoplo Catfish are a favorite of mine, even though they aren’t true Corydoras. They are members of the same family (Callichthyidae) but belong to their own separate genuses (Megalechis/Hoplosternum).

Hoplo Cats are ideal for community tanks because while they are impressively large, they are both peaceful and have very tiny mouths, keeping them from eating even the smallest of tank mates. They much prefer eating worms and other tiny invertebrates, same as any cory. Since they can grow 5 to 8 inches in length and are active fish, a 30 gallon tank is a minimum for a Hoplo Catfish.

If you can find a compatible male and female pair, you’re in for some interesting antics! The male will audibly grunt at his partner in greeting. And when breeding, the male will build a bubble nest similar to that of a Betta, using leaves and twigs if possible to reinforce it. He then aggressively defends the eggs and fry against intruders until the young are large enough to forage for themselves!

Skunk Corydoras are one of the easier species to identify. They have a short, almost squashed nose, broad creamy white to pink flanks, and a dark stripe running along their backs. Specimens in tip-top condition will also show metallic golden hues on their gill covers.

Interestingly, Skunk Corydoras are one of the more challenging types of cory catfish to breed. Likely, they are more likely to be wild-caught, and thus less tolerant of alkaline conditions, elevated nitrogenous wastes, and other issues found in aquariums.

But when provided with soft, acidic water, higher temperatures (78-84℉), and plenty of frozen and live food, it’s much easier to condition them to breed! Soft, feathery plants like Java Moss and Guppy Grass also provide Skunk Cories with a place to lay their eggs.

Sweeping through the hobby in recent years is a new Black Corydoras with a striking appearance. The fish is a deep, dark chocolate brown to pure black, similar to a Black Moor in tone, with a tan to golden belly.

However, there’s quite a bit of confusion as to their origin as well as which species this fish actually is. A major part of the issue is that Corydoras aeneus is actually part of a species complex; a group of closely related, nearly identical fish that are still considered separate from one another. Two other fish, Corydoras venezuelanus and C. schultzii, are not only similar but also have black color morphs that enter the trade.

Identifying them is a fairly confusing issue because it’s only really possible when they’re young. Young C. schultzii have reddish fins that darken as they grow older. And C. venezuelanus and aeneus only have reddish dorsal and adipose fins (the two fins on their backs) while the rest lack red. And since C. venezuelanus “black” is never encountered in the trade, you can narrow things down to one of the other two species.

Black Corydoras are otherwise trouble-free, easy to care for fish that look like shadows flitting about the tank. They are as hardy as their normal colored cousins and just as easy to breed. Which you should do because they are one of the pricier, high demand types of cory catfish!

Fish classification is constantly in flux, especially a group as complex as Corydoras! The Scleromystax group was recently split off from the main genus in the early 2000’s. These are all fairly long fish with long faces that stand apart from their smaller squat cousins.

Scleromystax barbatus is the only one that’s occasionally seen in the hobby and even then, it’s a fairly rare type of cory cat. This species is actually one of the easier ones to tell males from females apart, making breeding a little easier.

Males have a row of small spines running along the bottom of their gill covers (their “cheeks). Their patterning is also noticeably darker and better defined than that of females. And the pectoral and dorsal fin spines of males are much longer.

Considering their size and preference for schooling, you’ll want to keep this specialty cory in a larger tank. 30 gallons is an absolute minimum with 40 gallons being better because they are extremely active.