Evolution is a strange thing to behold at times. Seahorses are so strange that it’s hard to remember that they are fish at times. They have no stomach or scales, they can move their eyes independently, they have a prehensile tail, and when mating it’s the male gets pregnant.

Seahorses are as strange as they are fascinating. And if you aren’t satisfied with watching them at a public aquarium, why not consider keeping a herd of seahorses for yourself?

Note: Seahorses are extremely hard to keep in captivity and should only be attempted by expert aquarists. If you’re just starting out with your saltwater tank, please do not attempt to keep these animals!

Getting to Know Seahorses

For such an instantly recognizable fish, you may have noticed that finding care information on seahorses is hard to come by compared to most marine animals.

That’s because seahorses are as delicate as they look and the community of successful seahorse keepers is rather small.

You may already know that seahorses are masters of camouflage but do you know how far they can take this ability? Seahorses can not only drastically change their color but can even grow or shrink their bony protrusions to better match the coral or weeds they find themselves among.

They are extremely picky eaters and require excellent water quality. Unfortunately, good water quality is difficult to maintain because 1.) the outflow from your filter has to be weak and 2.) they require regular broadcast feedings. Broadcast feeding is where you load the water column with food for the seahorses to slowly consume. However, uneaten food will contribute directly to ammonia and other nitrogenous wastes.

The filter’s outflow needs to be weak because Seahorses are very clumsy swimmers. In fact, the world’s slowest known fish is the Dwarf Seahorse (Hippocampus zosterae), clocked at an impressive 5 feet per hour.

While seahorses can make good tank mates for stony corals, you need to be careful because their constant grasping can irritate the polyps. Seahorses can also be stung by aggressive corals and sea anemones or even eaten by them if they wander within reach. They are too slow and have no ability to quickly escape if a tentacle manages to attach to their body.

Other fish can also be a challenge for them because seahorses are easily intimidated by active fish, even when hungry. And being very slow planktivores, it’s hard enough to feed them as it is. Seahorses are best for seahorse-only tanks where they can peacefully interact with each other as they are highly social fish. In fact, they mate for life once they find a partner!

Unfortunately, while you want to keep as many of them together as you can afford, these fish also tend to be pricey, adding to the difficulties of getting a seahorse aquarium started. But if you haven’t been scared away yet, maybe now is the time to break down the differences between seahorse species!

While there are dozens of seahorse species in the aquarium trade, you’re only likely to ever see a few of them turn up at your local fish store. You may also find the closely related pipefish as well – but here are the most commonly found seahorse species!

As a subtropical seahorse species, they require warm water; 70-76℉ is perfect for them as they are still North American natives. You can find them off the coasts of Florida and the Bahamas. Temperatures need to remain stable as rapid fluctuations are stressful and even fatal to them. So keep your Seapony tank away from windows where the sun can cause the water to heat dangerously over time.

When performing water changes, you’ll need to take especially good care to match the parameters of the new water to the old. Fortunately, they can be kept in nano tanks as small as 5 gallons, where you don’t need to mix large batches of water.

While they are especially small, Dwarf Seahorses are also one of the more challenging seahorse species to keep. They require a constant supply of small, live food, such as brine shrimp nauplii. However, baby brine shrimp aren’t a complete food in themselves. You’ll also need to provide daphnia, copepods, and other live aquatic crustaceans for them to stay healthy long term.

Seahorses are also poor swimmers and Dwarf Seahorses are no exception. Without hitching posts (places for them to hang onto) and gentle to no current, they will be blown around the tank constantly.

Even when given the best of care, Dwarf Seahorses aren’t especially long lived. 2 to 3 years of age in captivity is ancient for these tiny seahorses. But being so small, they are a favorite of expert seahorse keepers!

As their name suggests, the Pygmy Seahorse is the smallest of all the seahorses to be found. At less than an inch in length, they make even the Dwarf Seahorse look like a giant! Pygmy Seahorses have a distinctive knobby appearance as they evolved to live among gorgonian (fan) corals.

They even have a red hue to each knob in a remarkable display of the power of natural selection! Though keep in mind that all seahorses are natural chameleons and can change their hues to match their chosen coral. The camouflage of the Pygmy Seahorse is so perfect that they were actually discovered accidentally when a scientist collecting corals found a pair still attached to his specimen!

Like most seahorses, the Pygmy Seahorse is very social and you’ll often find dozens of pairs clinging to the same fan coral. Provide them with plenty of hitching posts because these seahorses don’t spend much time swimming. They much prefer holding onto pieces of coral or live rock and waiting for food to drift by.

Pygmy Seahorses need several feedings a day; 3 being best but 2 can also work. Assuming you keep their water quality pristine, which can be challenging given their preference for broadcast feeding, you may be rewarded with dozens or even hundreds of babies per year! Unlike any other seahorse species, Pygmy Seahorse males have their pouch on their torso rather than on their tails.

If you’re fascinated by the intricacies of the seahorse pair bond, the Lined Seahorse is a great fish to watch! The male does an intricate dance on a daily basis when interacting with his partner. Both seahorses will also audibly click at each other, to re-establish familiarity as well as when courting for the first time. Despite being short-lived fish, Lined Seahorses mate for life in monogamous pair bonds.

Despite being a North American native and one of the easier seahorse species to keep in captivity, Lined Seahorses tend to be relatively pricey. However, captive bred specimens are easier to get than the more exotic IndoPacific species, helping wild stocks remain untouched. Captive bred seahorses are also much more likely to be weaned onto frozen or even prepared foods, making feeding vastly simpler. 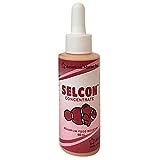 Being larger than the Pygmy or Dwarf Seahorses, you can keep Lined Seahorses with peaceful tank mates, like Cardinalfish, Percula Clownfish, Fire Gobies, and other peaceful inhabitants that will eat the same tiny invertebrates as them. They can consume adult brine and mysis shrimp, which should always be presoaked in vitamin solutions as they don’t provide enough nutrition on their own for your seahorses to thrive.

Of all the seahorse species in existence, the Leafy Sea Dragon is easily the most dramatic in appearance. Technically, this fish is a Sea Needle, a subgroup of free swimming seahorses in the family Syngnathidae.

It’s very easy to see how they get their name; their frilly extensions allow them to blend into patches of floating seaweed. Each fin extension is translucent, helping to break up the outline of the fish even further. Like all seahorses, the Leafy Sea Dragon is a poor, very slow swimmer, despite not attaching to hitching posts.

Leafy Sea Dragons are distinct in other ways as well. When it comes to breeding, these fish are solitary until the season is right. The male and female meet briefly and then separate. Instead of a brood pouch, the male collects the female’s eggs directly onto his chest, where they develop and eventually hatch.

Unfortunately, they are fairly rare in the hobby, too large for most tanks, and have highly specialized care requirements.

These are sometimes sold as Brazilian Red Seahorses. But like all seahorse species they will change color to suit their environment; in fact, Yellow Reidi Seahorses are just as common in the trade, making Brazilian Seahorse a more apt name to run with. Black, yellow, red, and orange are their favored colors.

Their rich, solid colors makes them one of the most in demand seahorse species in the hobby. And as Greater Seahorses, they are one of the largest species commonly found in the trade, growing up to 8 inches in length.

Unfortunately, they are also very delicate, easily stressed by active or aggressive tank mates, and almost always eat solely live food. On occasion, you may be able to find captive bred Brazilian Seahorses, which are likely trained to eat frozen foods.

Should you manage to keep them happy though, they are extremely prolific! The Brazilian Seahorse has the most babies out of any of the family; one male was recorded in producing nearly 2000 live young over the course of a single spawning! Only the Giant Seahorse can match them in terms of reproductive success! 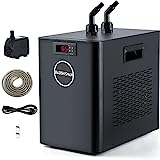 These waters are kept cold by deepwater currents coming from the North Pole that enrich their environment but keep things chilly. Rather than a heater, you’re looking at a chiller if you want to try your hand at keeping the largest seahorse of them all. If the water temperature exceeds 74℉ they will eventually grow (more) lethargic, stressed, and succumb to bacterial infections.

Giant Seahorses are noted for their fecundity. A male reaches sexual maturity at just over 2 inches and when fully grown, he can give birth to nearly 2000 babies at a single spawning! They come in a wide range of colors, from maroon and dark green to a pale yellow.

These seahorses aren’t chosen for their bright colors, but rather their rarity, difficulty of care, and eventual adult size. These are seahorses for specialist aquarists. While they are very long fish, Giant Seahorses aren’t particularly active. A 30 gallon aquarium is plenty of space for a mated pair, along with a few well chosen tank mates.