Giant Clams are one of the most famous coral reef inhabitants in the world! Brilliantly colored and instantly appealing, they make excellent show specimens for aquarists willing to put up with the finer aspects of their care. While Giant Clams are all large, many are small enough to fit in a standard aquarium. It’s these species that we’ll be focusing on in this care guide!

Getting to Know Giant Clams

Giant clams are fascinating reef inhabitants that share many care requirements with stony corals. This makes them excellent tank mates for large polyp stony (LPS) and small polyp stony (SPS) corals. The name “Giant Clam” actually refers to several genera of related clams. But only four of them from the genus Tridacna are commonly found in the aquarium trade.

Tridacna gigas is the Giant Clam, the one you think of when they appear in movies or on TV. Reaching up to 4 feet across, these stately invertebrates can weigh hundreds of pounds and live for over a century. Very rarely do they arrive in the hobby, which is unfortunate because they are one of the hardiest varieties.

That said, like all Giant Clams, they grow very quickly initially, around 2 to 4 inches per year, but slowing down as they close in on their adult size. You’d need a new home for a T. gigas before you know it!

Fortunately, the four most common clams are all smaller, which makes sense, as you don’t want a clam that’s going to both outlive you and outgrow the tank you provide for it. Each of these clams has unique care requirements, so let’s take some time to talk about the four “dwarf” Giant Clams!

Tridacna gigas is the largest of the group. But the following four Giant Clams are much more common – and much easier to house in a home aquarium.

The Crocea Giant Clam is the most popular for two very good reasons. First, it’s the smallest of the bunch, maxing out at around 6 inches. Secondly, it’s (arguably) the most beautiful of Giant Clams, with stunning color patterns that are as iridescent and variable as any coral species.

Unfortunately, they are also one of the more difficult species to care for. This is not the Giant Clam you should start with. Crocea Clams are called Rock Boring Clams because they have the ability to secrete acids from their foot that help them burrow into crevices and live rock. They require proper placement and a hard substrate where they won’t be disturbed and get plenty of light.

Aquarists who want the beauty of the Crocea Clam in a more Giant Clam-esque package turn to the Maxima Clam. Growing closer to 2 feet in length, this species is ideal for extra large aquariums where the clam can act as a showpiece.

Like the Crocea, the Maxima Clam is on the sensitive side and difficult to care for. Water stability is paramount to succeeding with this species, as is proper placement on a rock substrate.

While not usually as stunning as the first two Giant Clam species, the Squamosa Clam is a better match for first time clam keepers. It’s hardier and less sensitive to changes in its environment and can be kept on both rock and sand substrates.

Squamosa get their other common name, Fluted Giant Clam, due to the extensive projections covering their shells. These scutes are much larger than those of other Giant Clam species, providing a bit of beauty that persists even if the clam closes up.

The Derasa Clam is another Giant Clam that’s a good first clam for a beginner. Giant Clams of all kinds are fairly sensitive. But if you have an established reef tank, a Deresa is an excellent addition, so long as you’re prepared for it’s massive adult size and longevity. They are also known as Smooth Giant Clams because their scutes are tiny or even non-existent.

Giant clams are a challenge even for seasoned aquarists. Small polyp stony coral keef keepers will have a leg up because these mollusks prefer the same, stable conditions. But everyone else should do loads of research before trying these animals for the first time.

Water conditions, along with lighting, is what allows you to succeed with Giant Clam. They require nearly impeccable, but not sterile water conditions. Your temperature should be in the low to mid 70’s; conditions of 80℉ or higher will cause them significant stress.

The pH should be at 8.1-8.4, similar to stony corals and your alkalinity should stay between 8.0 – 12.0 dKH. Calcium levels should stay at 350-450 ppm, exactly as if you were keeping stony corals. And magnesium, which ensures calcium and carbonate levels remain high, should sit at 1200-1350 ppm. Trace elements like strontium are also needed and any high quality marine salt blend will have some.

However, you should be using reef specific salts because Giant Clams (and corals) will pull loads of minerals from the water. In nature they have access to unlimited amounts so we don’t want them to experience spikes in calcium and other important elements. You may even need to supplement using a calcium reactor 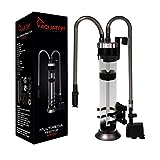 Nitrate is also important for Giant Clams because like corals, they have photosynthetic partners called zooxanthellae living in their mantles. These algae-like cells (dinoflagellates) require trace amounts of nitrate, ammonia, and other chemicals, which are then used as food by the clam. 2 to 5 ppm of nitrate ensures that the clam can properly feed its zooxanthellae.

Lastly, Giant Clams require a good amount of water flow but not too much. Strong current not only irritates their mantles but potentially allows bubbles to get inside of them, that they have trouble expelling. Medium current is best for all Tridacna clams.

There are a few things to look out for when choosing a Giant clam from the store. Obtaining a healthy specimen from the start will maximize your chances. But unlike fish, it’s a lot less obvious when a clam is suffering from stress.

The first thing you should do is to wave your hand over the light source. Your shadow should cause the clam to react slightly. Whether it pulls in its mantle a little or closes up entirely, both are good signs that the Giant clam is healthy and active. They have light sensitive photoreceptors that aren’t quite true eyes but allow the clam to detect potential predators nearby. An unhealthy clam may remain open and sluggish.

Next, you need to scan the outside of the clam for hitchhikers. Nudibranchs, aiptasia anemones, and worst of all, pyramid snails are commonly found on wild Giant Clams and occasionally on captive raised specimens. Sometimes you may find small commensal crabs living among the scutes; these are harmless scavengers and even interesting in their own right.

It’s very important to search for before introducing the clam to your tank because Giant Clams hate being moved. Also, if any hitchhiker’s escape your attention, you’ll have to do it all over again, further stressing the clam.

Pyramid Snails are small, parasitic snails about the size of rice grains. They colonize the exterior of the Giant Clam’s shell, usually around the edges where the mantle reaches as well as at the base. There, they nibble away at the clam’s exposed flesh. Enough snails can kill an adult Giant Clam and even a few significantly weaken it.

Fortunately, you can easily brush them off while inspecting your clam before adding it to your tank. Just do a thorough job because you don’t want to have to move it in the future if you find more.

Giant Clams will bleach under stress, similar to corals. So don’t choose a clam that shows signs of bleaching. Also examine it’s inhalant (larger) siphon. Clams that lethargically gape, allowing you to see their gills may be close to death. That said, this isn’t as important a sign as the others listed here. Giant Clams will periodically open their siphons wide but not for extended periods.

Choosing tank mates for Giant Clams is a delicate affair. Any fish that enjoys picking at them will cause them severe stress. Butterflyfish, large Angelfish, and other non-reef safe fish are not good matches for them. Stick to Clownfish, Grammas, Basslets, Gobies and other proven reef safe fish that will leave the clam alone.

Most marine shrimp, starfish, and other invertebrates are also safe to keep with Giant Clams. Be wary of crabs, especially Arrow Crabs, which will reach into the shell to tear off bits of flash. Be careful keeping a Giant Clam that sits on the sand with Nassarius Snails and other substrate dwellers. These snails aren’t predatory but they are aggressive burrowers and may cause your clam to shift position over time.

Corals make excellent tank mates for Giant Clams, so long as you choose carefully. Like most corals, Giant Clams can’t move. But unlike corals, clams don’t have tentacles. Corals use these to attack their neighbors and the defenseless clam will be sting mercilessly if placed too close to an aggressive coral colony.

Many LPS corals in particular are known to be very aggressive, so make sure that the flow and spacing is suitable for both species to coexist. True sea anemones as well as mushroom anemones like Ricordea can be a little problematic because they can move and will sting animals they come in contact with.

Feeding Giant Clams is a complex subject because they have so many feeding modes and their needs change as they grow older. Giant Clams are passive filter feeders that absorb organic molecules and elements directly from the water column. However they also ingest plankton and use light thanks to their symbiotic algae!

Young clams under 4 inches don’t have enough zooxanthellae to provide for their needs. They should be fed weekly suspensions of phytoplankton from a syringe. But as they grow larger, they require little to no supplementary feeding, especially if kept in aquariums with fish and other animals that provide a ready source of organic matter.

Leftover food, nitrates, and other chemicals are enough for a sizable Giant Clam to live from. Home aquariums have concentrations of these chemicals far greater than ocean parameters. Many aquarists will still provide it with supplemental organic matter or phytoplankton to ensure it remains healthy, however!

So long as the uneaten food doesn’t contribute to ammonia rising, this practice is perfectly fine. And even essential if you scrub your water extensively with a protein skimmer (which removes the organic elements the clam would normally feed on).

Despite being difficult to care for, Giant Clams are regularly bred in captivity nowadays using both massive aquariums and systems open to the ocean. It’s very difficult to get them to spawn in home aquariums because they are conditioned by seasonal variations in water temperature, currents, and lighting.

It’s also not very desirable because the clams release hundreds of millions of tiny eggs and sperm into the water, potentially polluting the water for your other reef inhabitants. Considering the difficulties involved, both in getting them to spawn and raising teh fry, it’s best to leave this up to the experts!