If you’re looking to try a coral that’s both hardy and beautiful, there are few better choices than Ricordea Coral! They have an intriguing shape and unlike other Mushroom Corals they have brilliant colors that make them appealing for reef keepers of all skill levels. They range from easy to moderately sensitive but armed with the right knowledge anyone can succeed with Ricordeas!

The first thing you need to know about Ricordea Corals is that they aren’t technically true corals! Rather, they are what’s known as corallimorphs. While they are cnidarians and thus closely related to corals, they are actually classified in their own order of animals separate from them.

They often go by the name Mushroom Anemone or Disk Anemone as well since they are similar in habits yet still distinct from true Sea Anemones. They are closely related to stony corals but don’t build a skeleton of their own.

In fact, mushroom anemones of all kinds are quite mobile! If the lighting, current, or neighbors aren’t too their liking they will simply shift position to find a better spot. This ability to move can cause problems for other corals since Ricordea and other mushroom anemones will sting nearby corals. They may also climb into reach of more aggressive species causing them to get stung when you thought everything was arranged safely.

Ricordea Coral are not only beautiful and fascinating in form but also some of the most beginner-friendly corals to work with. At least one of the species is…There are actually two Ricordea species in the trade: Ricordea florida and Ricordea yuma.

As you might have guessed, R. florida comes from the Caribbean region, from Florida down to the South American coast. R. yuma is found across the IndoPacific Ocean. Both kinds favor shallow waters with plenty of sun and high nutrient loads.

This second quality makes them especially beginner-friendly as a result. This is because beginner reef keepers tend to have conditions that fluctuate and more buildup of organic matter and nitrogenous compounds, which these corals enjoy. That said, all corals prefer some level of stability so do your best to keep the tank parameters within reasonable limits!

Now that we have a basic understanding of what Ricordea Mushrooms are, let’s dive into how to care for these beautiful corallimorphs!

Ricordea Corals vary somewhat in ease of care. Ricordea florida is easy to the point of being beginner-friendly. R. yuma, on the other hand, is a little more sensitive and a better choice for intermediate level reef keepers. But how do we tell these similar looking corallimorphs apart?

Which Ricordea Do I Have?

At first glance, the two types of Ricordea Coral appear to be identical! Both have fleshy tentacles surrounding a visible mouth within a large, disk-shaped polyp. However, there are some subtle differences worth noting here.

When looking at the tentacles of Ricordea yuma, there is a good deal more order apparent to how they are arranged. There are semi-alternating rows of large and smaller tentacles visible. While the large tentacles may not always be in complete rows they are almost never side by side.

Also, the rows tend to radiate neatly out from the central mouth like the spokes of a wheel. Lastly, there are usually tentacles concentrated directly around the mouth itself.

If you have Ricordea florida, the most obvious difference is that the tentacles are arranged much more randomly. There are no visible rows, only a chaotic collection of tentacles. However, there is usually a space free of tentacles directly around the mouth that R. yuma does not have. This video does an excellent job of breaking down the differences between the two closely related Ricordea Corals!

Besides these physical differences, R. yuma tends to be much more colorful as well compared to R. florida, but mostly in terms of total color possibilities. Both corallimorphs are brilliantly colored and flashy enough to deserve a place in any reef tank!

The main difference between Ricordea yuma and R. florida is that the first species is a little more sensitive to water conditions. R. florida, on the other hand, is very hardy, even for beginners.

That said, both species are often some of the first corals to colonize an area that’s been severely disturbed. Ricordea also prefer slightly higher nutrient levels in their water compared to SPS and many LPS corals. This is often why many experienced aquarists struggle with corallimorphs and “easy” soft corals; their water is too pure. SPS corals prefer these conditions but Ricordea enjoy a trace of nitrate and other elements to bolster their growth.

Since they don’t have hard skeletons like other corals you also don’t need to monitor calcium, magnesium, and strontium levels quite so closely. But they still use small amounts of these elements. And if you’re keeping them in a reef tank anyway it’s better to provide them with reef parameters.

Otherwise, they prefer the same water conditions as other corals. The temperature should sit between 72-78℉. Your specific gravity (salinity) should be between 1.023-1.025. And the pH should test between 8.0-8.24. As I mentioned earlier, a bit of nutrition in the form of nitrates and dissolved organic matter is necessary as their growth will halt without it.

Ricordea also enjoy low to moderate levels of water flow. High flow is disturbing for them and can cause problems if your corallimorph gets blown onto a neighboring coral. While they don’t have long sweeper tentacles, Ricordea Corals will sting any other corals they come in contact with.

Most corallimorphs are good inhabitants for low light tanks but Ricordea Coral prefers moderate to high light conditions. In the wild they are typically found on the reef flats in shallow, strongly lit conditions. They may occasionally crawl to the sides of a rock if lighting grows too intense. But they otherwise should be given ample full spectrum light.

Ricordea Corals are classified as a semi-aggressive species of corallimorph. That said, coral aggression is a bit of a strange topic for beginners to consider. After all, corals hardly move, so how are they aggressive? As it turns out, they have several ways of attacking each other.

Some can release toxins into the water column to slow the growth of their neighbors (unlike Toadstool Corals). While others use long sweeper tentacles that are used for both food collection and stinging competitors that come into reach.

These tentacles can be as long as six inches in some types such as the Torch Coral (Euphyllia glabrescens) and are typically extended at night. Which means when morning comes around and you find a damaged coral, it may be a mystery as to what caused it if you aren’t aware you have an aggressive species.

Ricordea Corals don’t have either of these features. However they do have a fairly potent sting to their stubby tentacles and they will attack anything they come into contact with. Ricordea can also be fairly mobile, which complicates matters as you might think the coral is well placed. Until suddenly, one or both corals show signs of injury from coming into contact with each other.

It’s best to keep them with SPS and LPS corals that are out of their climbing reach. Also avoid LPS corals with long sweepers unless the Ricordea has room to evade them. Otherwise, they will be stung mercilessly. Soft corals like Leather Corals and the Green Star Polyp often have toxic mucus barriers that discourage Ricordea from touching them.

If you’re looking to keep fish with your Ricordea Corals then they should be reef-safe in general. Avoid fish known to pick at corals, such as Butterflyfish and Angelfish. Clownfish, Damselfish, Tangs, Blennies, Mandarin Gobies, Firefish, Grammas, Basslets, and many Pygmy Angelfish (with caution) are just a few of the many reef-safe fish you can keep with a Ricordea Coral!

Despite occasional concerns over their aggression, feeding Ricordea Coral is a simple affair! Many moderate to high light corals can live solely from their photosynthetic zooxanthellae. But Ricordea Mushrooms are eager eaters and should be fed two to three times per week to boost their growth.

They do also absorb nitrates and dissolved organic matter from the water column as well. So you can reduce their feedings to once per week if you’re concerned about how their leftovers and waste impacts the water quality for more sensitive coral species.

You can use the liquid drawn off from thawed frozen foods, which is rich in particulate organic matter, in a sort of “dusting” of the coral. Or you can offer them thawed brine shrimp, mysis shrimp, or pieces of krill. Just make sure that the food is sized appropriately for the rather tiny mouths of these corals.

Assuming you keep them well lit and well fed, Ricordea Coral are some of the easiest corals to propagate. In fact, they are an excellent coral for first-time propagators to learn with because they heal extremely quickly and there isn’t a stony skeleton that requires heavy tools to cut through.

In the wild, Ricordea Corals reproduce both sexually, releasing clouds of eggs and sperm, and asexually. But sexual reproduction requires coordination through lunar cycles (tides and moonlight).

Pedal laceration is the first and least dramatic form of reproduction. As your Ricordea Mushroom shuffles around the tank it will leave tiny pieces of its foot behind. These flesh chunks will regenerate over time into new clones of the original coral! If you aren’t in a hurry to propagate your coral and there is plenty of space for it to roam, you’ll eventually have several Ricordea Corals covering any available living space in your tank.

The second method is through longitudinal fission. During this process, the coral will actually grow a second mouth, signally that it’s about to split. Once the second mouth has formed, it will then slice itself into two separate colonies that then go about their business.

As simple animals, corals can bounce back from a lot of damage that is immediately fatal to higher animals like us. Reef keepers propagate corals by splitting them into pieces. And these pieces have the ability to recover and grow into brand new colonies. 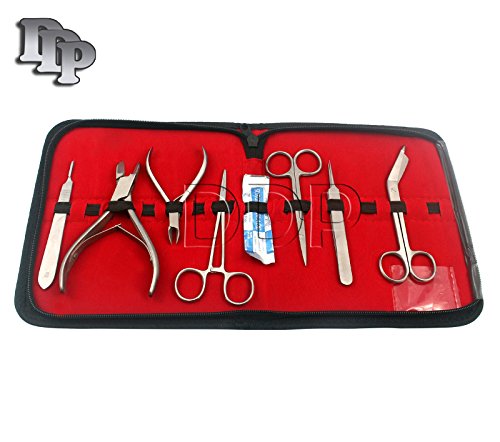 This process can be stressful to the coral but a well fed Ricordea Coral will quickly heal from the cutting. You’ll need razor sharp, stainless steel propagating tools, an iodine bath to prevent infections, and a place for the cutting (frag) to attach.

While it can be a bit frightening if you’ve never done it before, fragging a corallimorph is actually very easy and not too time-consuming. If you’d like to see a step-by-step guide to propagating Ricordea Mushrooms have a look at the video below!