Tangs, also known as Surgeonfish, are a diverse group of vegetarians found in tropical waters worldwide. They include some of the most instantly recognizable marine aquarium fish as well as exotic fish even experts might not recognize.

Many are beginner friendly while others are a challenge even for master aquarists. I think now is a great time to get to know the many types of Tangs out there!

Here are 10 of our favorite tang species for saltwater enthusiasts:

The most popular Tang of all is undoubtedly the Yellow Tang. Small, hardy, and attractively colored, these Tangs are found in pet stores worldwide. No Tang can truly be called a beginner’s fish. However when kept in mature aquariums and given plenty of vegetable matter Yellow Tangs come close.

Yellow Tangs are unusual for their genus because they can be kept in groups so long as you buy them young and all at once. When kept singly they are especially aggressive towards new Yellow Tangs as well as other Zebrasoma species.

They are also less susceptible to Marine Ich and Hole in the Head compared to their relatives. It’s best to buy captive bred whenever possible as they will be even hardier and accepting of new foods.

Powder Blue Tangs are seen frequently in the hobby, though they aren’t nearly as popular as Yellow or Royal Blue Tangs. Unfortunately, the majority don’t last long because they are a particularly sensitive type of Tang.

Powder Blues don’t suffer transport from the ocean to pet stores very well. They are also highly susceptible to Marine Ich and Velvet infections. When a Powder Blue Tang arrives at your local fish store it’s better to put a deposit down and observe them for a week to ensure they have a strong feeding response.

With their delicate blue and yellow tones and contrasting black masks, Powder Blue Tangs look absolutely regal in the schools they form in nature. However these associations are dependent on how much algae is available for feeding.

Otherwise they are intolerant and territorial. In all but the largest of aquariums Powder Blue Tangs should be kept singly.

Like many Acanthurus species the Achilles Tang is a fish for advanced level hobbyists. They are not only susceptible to skin infections like Marine Ich but also HITH disease.

Sheets of dried Nori can also encourage a picky Achilles Tang to feed. Some aquarists also modify sumps to grow macroalgae to then feed their Tangs.

Hippo Tang. Blue Tang. These are a few more common names for this iconic species. Royal Blue Tangs were well known to hobbyists even before the fame Dory launched for them in Finding Nemo.

Royal Blue Tangs are large, active, and brilliantly patterned, with an unearthly beautiful blue skin tone. When lacking proper nutrition they tend to fade and eventually develop the facial pits of HITE, though.

While not as delicate as Powder Blue or Achilles Tangs, Royal Blue Tangs are not beginner-friendly fish. Water parameters should be stable and they should only be introduced to mature aquariums. When stressed by disease, poor water conditions, or predators they often lie on their sides.

Royal Blue Tangs are less aggressive towards others of their own kind. So long as they are all introduced as a group you can usually get away with keeping them together.

Kole Tangs are found among coral atolls and reefs throughout the IndoPacific Region but are especially common around Hawaii. The Polynesian people found them to be so delicious they were ruled to be “royal food,” with death being the punishment for harvesting them without permission!

In Hawaiian waters they often set up cleaning stations for migrating green sea turtles. By grazing on the algae that accumulates on their shells the Kole Tangs get a meal and the sea turtles lose drag that limits their swimming speed.

Smaller and less aggressive than most types of Tangs, Koles will inevitably be bullied and harassed if kept with them. In larger aquariums it’s sometimes possible to keep multiple Kole Tangs however they generally fight with one another for the best grazing areas (the entire aquarium).

Kole Tangs are otherwise peaceful towards other fish and are some of the best marine algae eaters. Macro, hair, and even diatomaceous algae are all kept under control by them, including in reefs without picking at soft or stony corals.

Like other types of Zebrasoma Tangs Sailfins are mild mannered towards non-Tangs but will chase other Tangs around, especially similar looking species. Given the beauty of their finnage and relatively hardy nature Sailfin Tangs are excellent algae eaters for both fish only and reef aquariums.

One of the pricier and attractive types of Tang is the Purple Tang. While they are mostly found in the Red Sea there are small populations scattered throughout the Indian Ocean.

Purple Tangs are medium sized and entirely reef-safe, making them a popular choice for advanced aquarists in need of a competent algae eater. While Purple Tangs are sometimes found in pairs or schools in the wild they are generally intolerant of each other and other Tangs in aquaria.

Given how sensitive they can be when first introduced to new aquariums, it’s best to give Purple Tangs a week in the pet store to acclimate. Or better still, set up a quarantine tank where you can watch them, treat for parasites, and gauge their feeding response!

Black Tangs are some of the most expensive marine fish, running anywhere from $600 to $1400 apiece. They are found only around several remote archipelagos in the South Pacific, most of which don’t have extensive aquarium fish collecting infrastructure.

While they are rare and a prized showpiece they are quite hardy and easy to care for once established in their new home. Their jet black color and brilliant white dot around the caudal spine is unusual compared to the showier colors most Tangs take on.

As attractive a combination they would be with other Zebrasoma species like Yellow and Purple Tangs, Black Tangs will viciously fight with their cousins as well as each other.

Clown Tangs go by a few other common names, including Pajama Tang and Lined Surgeonfish. While Clown Tangs aren’t especially sensitive in terms of water quality their size and personalities make them more challenging than other Tangs. They can reach over a foot in length and are often aggressive even towards non-Tangs.

Clown Tangs are also active swimmers, necessitating aquariums of 180+ gallons with plenty of macroalgae for them to graze on. They are ideal grazers for large reef or fish-only aquariums!

While they can be delicate during the shipping and acclimation stages Clown Tangs are hardy and long lived once established in your aquarium!

Naso or Lipstick Tangs are one of the largest commonly available types of Tang. Reaching nearly 2 feet in length they are suitable only for the very largest of aquariums however they acclimate quickly and are usually eager feeders.

Despite being so large Naso Tangs are on the peaceful side, especially compared to other large types like Clown and Achilles Tangs. They can be kept in groups but only in aquariums in excess of 300 gallons.

Naso Tangs can be highly variable in color, depending both on the region they’re from as well as their moods and individual character.

If you’re looking to get a tang for your saltwater aquarium, here are a few things that you should keep in mind:

While some species, such as the ever-popular Yellow Tang, are marked as “Easy,” no type of Tang is truly easy in the way Damselfish or Gobies can be. Tangs can be kept by beginners however you should have a firm grasp of water chemistry.

No Tang should be the first fish introduced to cycle a new aquarium as fluctuations in ammonia and other parameters can prove fatal for them. Tangs are also consummate vegetarians and should be given limited levels of high protein prepared foods.

When fed improperly all Tangs are susceptible to developing Hole in the Head (HITH). HITH is generally caused by nutritional deficiencies – when given plenty of macroalgae and plant-based foods Tangs eventually recover.

With Tangs you’ll want a constant supply of both macroalgae and prepared seaweed-based foods for optimal health. The following products are perfect for any of the Tangs on this list! 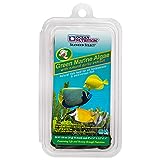 No type of Tang can truly be said to be peaceful, either. The closest would be the Kole Tang (Ctenochaetus strigosus) however they will still fight if kept with similar looking Tang species.

Tangs can vary in personality quite a bit, with one individual being entirely tolerant while others needing to be the king of the aquarium. And with their sharp caudal spines Tangs can leave bloody wounds on each other or other fish that try to challenge their dominance.

New Tank Syndrome: What Is It and How to Fix It (Guide)
Homemade Fish Food: A Complete DIY Fish Food Guide