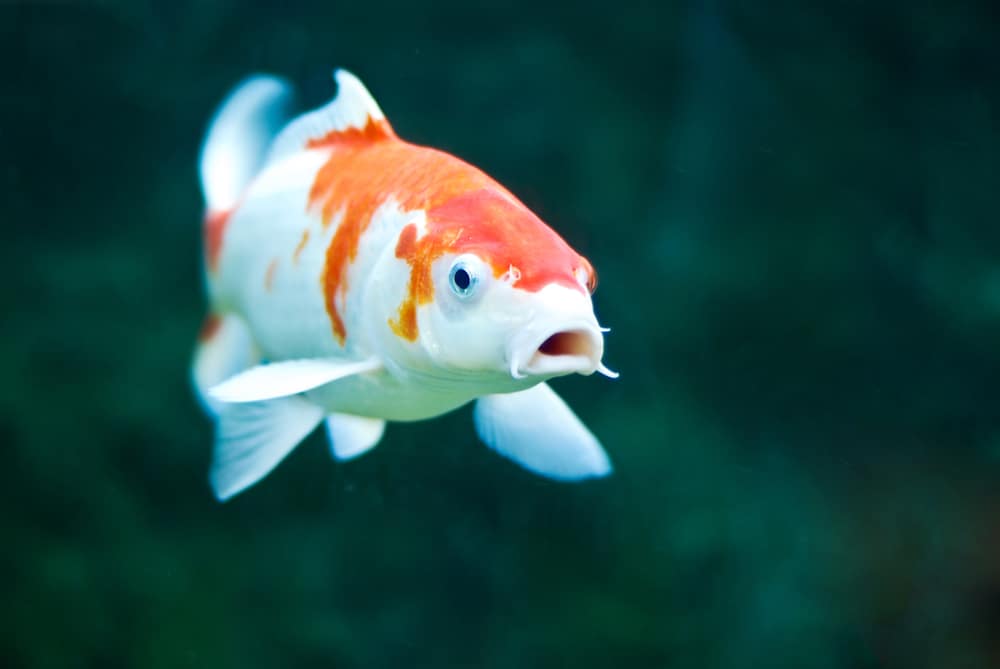 Japanese Koi are – without a doubt – one of the most widely kept and popular fish in the world.

In fact, they show up just about everywhere – outdoor ponds, water gardens, artwork, media, and even tattoos. These ornamental fish can be dated back several hundred years and can fetch widely expensive prices depending on colors and patterns.

Int his guide, we cover a brief history or Japanese Koi and discuss 15 of the most popular types of Koi that you can find on the market today.

The History of Koi

There are hundreds of types of Koi around the world today! And every single one is descended from the Amur Carp, Cyprinus rubrofuscus, bred in Japan for color nearly 200 years ago. Before then, Amur Carp were primarily a food fish, raised in ponds across Asia for thousands of years.

However, an enterprising Koi breeder in the town of Ojiya in Northeastern Honshu started selecting for beauty instead of just taste. Many types of Koi now have collector’s value and can sell for thousands of dollars as aesthetic and breeder specimens!

Because there are so many different types, and because Koi are both sold mixed and hybridize regularly, I thought it best to break down the different types of Koi so you can choose varieties that best suit your personal tastes.

Koi vocabulary is intensive, going so far as to have individual names for each of the different color blobs on a particular fish! In this not so brief breakdown, these are the Japanese words you may come across on a frequent basis.

Here are a few common types of Koi that you should look out for when stocking your pond:

It is said in the ornamental Koi tradition that Koi keeping begins and ends with Kohaku. When you think of Koi, these are often the fish that come to mind. As one of the Gosanke, the Big Three, along with Sanke and Showa, Kohaku are immensely popular types of Koi. Kohaku have white bodies with red markings and no additional colors.

The origin of the Taisho Sanke (most formally known as Taisho Sanshoku) is supposedly a matter of happenstance. During Japan’s Taisho era, 80 years ago, a Kohaku with small, scattered black sumi markings appeared among the breeding stock. Like Kohaku and Showa, Sanke are one of the Big Three of the Koi world. Gosanke of the best quality have a snowy white base and crimson red markings.

Showa Sanshoku are black bodied with red and white markings. The third Gosanke was developed from crossing two varieties in the 1920’s but wasn’t fully developed until the 1970’s. Unfortunately, unless you’re buying from a koi specialist breeder, its hard knowing for certain whether you have a pure Showa or Sanke.

The various varieties of Koromo are the product of crossbreeding Kohaku and Asagi. “Koromo” refers to the group, while each type of Koi can go by “Koromo” or “Goromo,” depending on tradition. Koromo Koi have an indigo blue crescent to the edge of the scales on their red markings. As a Kohaku based variety, an even balance of red, white, and black coloration across the body is a sign of good breeding.

Tancho are Kohaku with pure white bodies and a single red mark on head. Classic Tancho have a circular, vertically symmetrical red pattern. The resemblance to both the Japanese flag and the traditionally sacred Red Crowned Crane makes owning Tancho a mark of national pride. The Tancho spot can appear in other varieties but the name “Tancho” refers strictly to these white Kohaku.

Asagi Magoi are a type of Koi with blue-grey scales on their backs with a net-like pattern to scales thanks to the pale edges. One of the oldest koi varieties, Asagi have their roots in the 1860’s as descendents from wild-variety Black Carp. The below the lateral line, the scales take on a bright orange or red color that can bleed into the fins, face, and gill covers.

German Mirror Carp, which are mostly scaleless, were bred in the early 1900’s to provide pond-raised food fish that were easier to prepare. These German carp were imported to Japan and crossed with Asagi, resulting in the Shusui breed. The term “Doitsu” (scaleless) refers not only to Germany (Deutschland) but also describes other scaleless types of Koi.

Surprisingly, even something as simple as pond fish can become controversial. Hirenaga are Koi in the sense that they’re descended from the Amur Carp. However, they are not considered Nishikigoi – “true Koi.” Japanese breeders in the mid-20th century imported Indonesian Long-Finned River Carp to add diversity to the Nishikigoi gene pool. However, the resulting young mutts tended to manifest traits outside of the standards set by traditional Koi judging panels. Their body shapes tend to be slimmer as well with little of the robustness of Nishikigoi.

Originally of Showa Sanshoku stock, Utsuri are black-bodied with bands of black wrapping around the body. Red, white, or yellow markings of a single color are allowed and ideally well balanced across the entire body. A deep black combined with intense color for maximum contrast are the best of the breed. The name “Utsuri” means “reflection.”

Hikari is the Japanese word for “shining,” which describes the metallic, reflective scales of Hikari Koi. In the wild, such reflective, eye-catching scales would cause them to become a quick meal but in the pond environment they are a delight to the eye. Their appearance can be likened to polished gun metal. Hikari come in three subvarieties:

Kumonryu are Doitsu Koi with a fascinating characteristic. Water quality, age, and temperature will cause Kumonryu to shift between patterns of solid midnight black, milk white, and a mixture of the two colors. These shifty Koi are highly sought after, but their constantly changing patterns make judging them more of a challenge.

Matsuba are Hikarimuji Koi, so they share the metallic color of this breed. However, they also have dark centers to their scales that form a strong reticulated pattern. Some such as Kin (Gold) Matsuba and Gin (Silver) Matsuba look similar to a pine cone from above. The Orenji (deep orange) Matsuba mixes light and dark orange into an intensely colored pattern.

Purachina (Platinum) and Yamabuki (Gold) Ogon are also popular Hikarimuji types of Koi. Purachina Ogon have solid white or silver bodies while Yamabuki Ogon are yellow or golden colored. A clear, unmarked white head and body free of markings are ideal in these Nishikigoi. Butterfly Ogon are often seen in stores and are some of the most graceful Koi on the market but aren’t favored by purists.

Kawarimono is a catch-all term for nonmetallic types of Koi not considered standard color morphs like Kohaku or Matsuba. While grouped together, Kawarimono can still compete in shows and breeds come and go from the categorization. Kumonryu and Kikokuryu are part of this group, despite being desirable Koi.

As you can see from our list above, the world of Japanese Koi is extensive and vibrant. There are plenty of Koi varieties available for purchase – both for beginner and expert fishkeepers alike.

Make sure to take you time and do plenty of research before selecting you Koi – with a lifespan of 25 to 35 year, Koi give life tons of life and color to any body of water they inhabit.