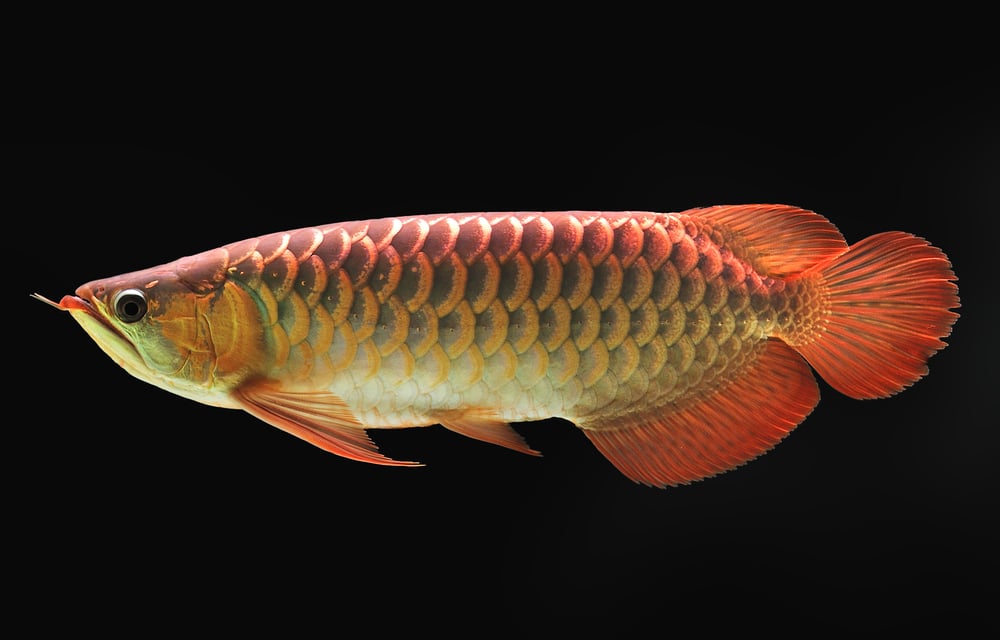 Aquarium keeping is technical but does not need to be an expensive hobby – unless you decide to get involved with one of these fish, that is!

Some of us enjoy guppies and ghost shrimp while others spend their money on showy and rare fish that could purchase a house!

The most expensive fish are varied in background but all are interesting in their own way! Captive fish breeding is as intensely competitive as dog breeding in some countries.

Many of these fish are also rare due to remote habitats or difficulty in keeping them alive.

Let’s compare the 16 most expensive aquarium fish in the hobby!

16 Most Expensive Fish in the Aquaria Hobby

Here are a few of the most expensive fish sold in fishkeeping:

As symbols of prosperity in China, Singapore, and other East Asian countries, Asian Arowanas are some of the most expensive fish you can buy.

Specifically, the many color morphs that are found in captive bred varieties as wild Asian Arowanas are an endangered species.

From Super Red Dragon to Platinum, these fish regularly reach four and five figure prices. The second most expensive fish ever purchased was an albino Asian Arowana that sold for $300,000.

When put on display, armed guards are often needed to deter theft and even saboteurs bearing poison. In Asia, show specimens also undergo liposuction and plastic surgery treatments to increase their aesthetic appeal and win shows for their owners.

The majority of stingrays are marine fish closely related to sharks and sawfish, but there are several freshwater stingray species as well. This makes the Polka Dot Stingray even more unusual.

These small yet strikingly colored stingrays are native to the Xingu River Basin in Brazil, where they hunt invertebrates like shrimp and clams.

Polka Dot Stingrays have crushing jaws for devouring their prey, shell and all. And true to their name, they also have a venomous barb along the tail to deter predators.

While humans rarely intentionally disturb them their habit of covering themselves with sand in shallow water means they get stepped on frequently. While rarely fatal, the wound can often be a serious infection risk.

Discus are some of the most unusual and most expensive fish commonly seen in pet stores.

These Amazonian cichlids get their name from their flattened, round shape. Discus come in dozens of varieties, most of which have neon red, blue, or yellow spangling.

Another unusual trait of Discus is that they are social cichlids, preferring to be kept in groups of at least 6.

Discus are often sold as breeding pairs which increases their value substantially. For starters, Discus are nearly impossible to tell the difference between males and females.

They are also challenging to breed, preferring highly acidic blackwater environments full of driftwood and live plants. When they do breed they often pair for life.

Many aquarium fish are expensive because of long standing tradition. However, the Peppermint Angelfish is a true gem.

Found only in the Cook Island archipelago, they live specifically in deep reefs in the region, from 300-400 ft. below the surface.

Would-be collectors have to not only descend but then hunt these shy, retiring dwarf Angelfish in the near-darkness.

Once captured, if either the fish or the diver ascends too quickly, decompression sickness and death can set in. As a result, Peppermint Angelfish command incredibly high prices, with one specimen selling for an astounding $30,000.

While closely related to the common $1.99 Plecostomus you see in every pet store in the nation, Blue Eyed Plecos are far more exotic.

For starters, they won’t touch algae. They are also poor swimmers and noticeably chunky compared to other Pleco species.

Blue Eyed Plecos and their relatives (Panaque species) are specialist driftwood feeders; without access to nutritious waterlogged wood they will eventually wither and die.

Once fully mature, Blue Eyed Plecos sprout thick bristly whiskers along their gills and barbs on their pectoral barbs, giving them a fierce appearance.

Alligator Gar are fairly common in the Mississippi Basin and Texas coastal region. They are active predators and literal living fossils that have been around for nearly 100 millions years.

Gar scales and skin is famously tough; the hardness of the ganoid scales is due to an enamel-like coating combined with the sheer size of adult fish.

Native American tribes used the scales for jewelry and the skins for leather and breastplates.

Platinum and Golden Alligator Gar are occasionally found in the wild but are more often bred for color in Asia.

Whether wild caught or captive raised, Alligator Gar are easy to care for so long as they are fed live prey and have ample space to prowl.

Masked Angelfish are rare due not only to their preference for deep water habitats at the edge of the limits of divers.

They are mostly found in the northern Hawaiian Islands and Midway Atoll, both of which are within the Papahanaumokuakea Marine National Monument. Here, fish collection is strictly prohibited.

A few rare specimens stray further south where they risk capture for the aquarium trade. Masked Angelfish have only been bred in captivity a handful of times, making them some of the most expensive fish to collect.

While young Angelfish and females are white with black markings the adult males have a brilliant orange mask and fins.

Zebra Plecos (L046) are unusual in many ways and not just because of their bold black and white stripes. These small plecos are native to the Big Bend region of the Rio Xingu, a tributary of the Amazon River. These waters are swift flowing, well oxygenated, and pristine, which makes them harder to keep than common Plecostomus and some of the most expensive fish.

Zebra Plecos are also omnivorous. They rarely eat algae and instead prefer a mixture of blanched vegetables, sinking wafers, and invertebrate based foods like shrimp and bloodworms. While wild-caught specimens are increasingly rare as Brazil has banned their export, captive bred Zebra Plecos are slowly becoming more common in the trade.

Did you know one of the most expensive fish is also one of the most dangerous? Electric Eels are famous for their ability to produce high voltage shocks to stun and kill prey.

Found in the Amazon and Orinoco River basins of South America, they live in dark, weed-choked waterways. Their eyes are tiny and almost vestigial; instead they navigate using an electrical radar detection system.

Electric Eels have such fine control of their abilities that they can even shock fish muscles into moving into place in order to be consumed.

Adults can weigh close to 50 lbs and while the shock itself is not usually fatal (high voltage but low amperage) a human falling stunned into a body of water can swiftly drown.

Think “Catfish” and you usually think of placid, somewhat chunky bottom dwelling fish with cute whiskers. The Black Devil Catfish is a fish that lives up to its name; they are more like sharks than tame bottom feeders.

They are powerful swimmers that will consume anything that fits within its mouth. And that which doesn’t will be mercilessly attacked until it leaves its territory, which is usually the entire tank.

Black Devil Catfish can be kept in community tanks in excess of 300+ gallons with fish that stick to the upper levels of the aquarium. However, they should be given a tangle of rocks, plants, and roots to haunt.

Their triangular, dorsal fin-less form lends emphasis to the bold back patterns and robust size of these Goldfish.

While common in Japan Izumo Nankin are rarely exported and expensive to find with a traceable bloodline.

Many of the most expensive fish are tank-sized, even larger fish like Electric Eels.

Nothing short of a swimming pool or public aquarium sized enclosure can handle a full grown Arapaima. These Amazonian megafish regularly reach 6 feet and can eventually double that.

While Arapaima (or Pirarucu) don’t leap like their cousins the Arowanas they do share their indiscriminate eating habits. Arapaima will consume anything that can fit in their cavernous mouths; fish, birds, reptiles, swimming mammals, insects, and more.

They also have the ability to breathe atmospheric air, surfacing every 10 minutes to take loud, sucking gulps. The noise is distinctive and helps indigenous Amazonian hunters track the fish.

Related to the fairly large Clown and tiny Kuhli Loaches, Royal Clown Loaches are the largest members of the Botiid family.

While regular Clown Loaches grow to the impressive size of 8-12″, these cousins reach twice that length at maturity.

Royal Clown Loaches are shy, nocturnal carnivores, much like other Botiids. However, their size, speed, and large mouths allow them to gulp down smaller fish with ease. They are model citizens in a community tank for large fish, however, and prefer being kept in groups of 3-6.

Flowerhorn Cichlids were developed and popularized in Malaysia, Thailand, and Taiwan in the 1990’s.

Their mixed bloodline was a successful effort to combine and maximize the male nuchal hump, spangled blue, black and red patterning, prominent lips, and flowing fins of their parents into a single fish.

The most expensive fish ever sold for aquarium keepers was a Golden Monkey Flowerhorn Cichlid. It sold in 2009 for $600,000 in Malaysia.

Unlike Koi and Goldfish, Flowerhorn Cichlids are aggressive predators that are unsuitable for most community tanks and ponds. However, they can be kept with aggressive fish like other cichlids.

Like most Pimelodid Catfish, Zebra Shovelnose are active predators that will consume anything that can fit in their copious mouths. Their bold zebra striped pattern and difficulty of care make them one of the most expensive fish in the hobby.

Zebra Shovelnose Catfish are from the fast flowing headwaters of the Amazon River Basin and their need for fast flowing, pristine,highly oxygenated water makes them more challenging to care for. Large tanks of 220+ gallons outfitted with powerheads are ideal for them.

Tankmates are also a challenge but large characins like Silver Dollars can not only keep up with the current but are too large at maturity to be eaten.

Bettas or Siamese Fighting Fish are known the world over for their flowing fins, ease of care, and aggressive attitudes towards each other.

The majority of Bettas are some of the most common and inexpensive fish. However, in 2016 a Trai Rong Betta with colors identical to the flag of Thailand ended up selling for $1500 and is thought to be the most expensive Betta ever sold.

The red, white, and blue horizontal stripes are impossible to breed so straight and true and are a matter of luck. This makes that Trai Rong Betta one of a kind!

Considering Bettas are a national past time and symbol for Thailand it’s no surprise the fish sold for as much as it did.