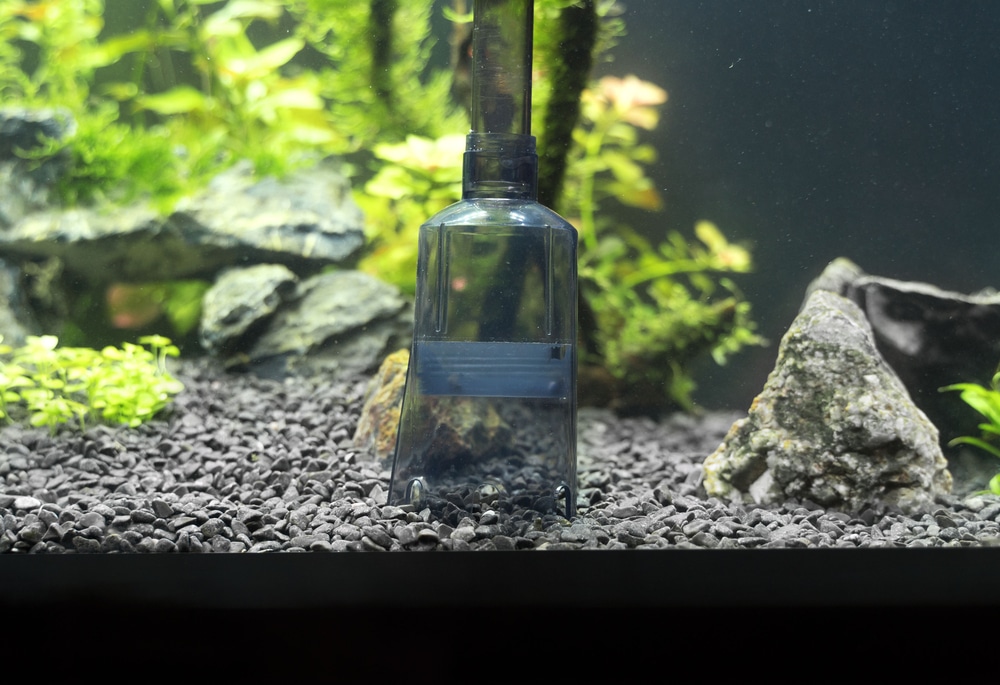 Perhaps you’ve just dipped a test strip and found that your nitrates are higher than recommended?

Ammonia, nitrite, and nitrate are three bits of aquarium chemistry you’re hopefully familiar with. But if not, don’t despair!

The chemistry is easily understood and of all of the three agents, nitrate is the least toxic and most easily dealt with!

Let’s take a look at how to reduce nitrate in your aquarium.

Nitrates are the end stage of the nitrogen cycle in a well-cycled, established aquarium.

In the below graphic, you can see the process commonly referred to as the “Aquarium Cycle” and how nitrates play a role.

Fish excrete ammonia through their gills as part of the respiratory process. This ammonia goes directly into the water column and is so dilute as to be a non-issue in the wild.

Fish waste is also chock-full of organic matter that breaks down into ammonia through bacterial action. Ammonia (NH3) is the first stage of the nitrogen cycle and is highly toxic to aquatic animals.

In an uncycled aquarium, adding all of your fish at once would cause ammonia to simply build up until your fish died from ammonia poisoning.

To reduce and eliminate ammonia, nitrifying bacteria are essential to converting it into less toxic substances. These beneficial microorganisms are found in tank water, on organisms you introduce, and even in the air.

Over time, they will seed an aquarium and found a healthy colony of bacteria in a process that takes 6 to 8 weeks.

That being said, I always recommend jump-starting the process with an addition of nitrifying bacteria. Tetra SafeStart Plus is my cycling agent of choice!

Once ammonia enters the water column, bacteria have access to it, consuming it and excreting nitrite, NO2-.

Nitrite is less toxic to aquatic animals but still not ideal. That’s where a second set of nitrifying bacteria come in, consuming nitrite to convert it into nitrate, NO3-.

Nitrate is much less toxic than either nitrite or ammonia and can be tolerated by healthy fish. Nitrate is not harmless, however, and problems can occur if allowed to build up.

Symptoms of Nitrate Poisoning in Fish

Unless you have live plants within the aquarium, nothing else will consume nitrite besides algae. Fish suffering from nitrate poisoning begin gasping at the surface as if the water were running low on oxygen.

What’s actually going on is that their blood is richer in methemoglobin, a brown chemical that reduces their blood’s capacity to capture and retain oxygen.

Take a close look at your fish’s gills: brown gills on a gasping fish are clear indicators of nitrate poisoning. While they will hang near flowing sources of water like powerheads or filter intakes, eventually they will suffocate and die unless you take corrective action.

When nitrate poisoning kicks in depends on your fish as well as the concentration and length of exposure. Concentrations greater than 50 ppm will result in toxicity, as will 20-50 ppm over an extended period of time.

How to Lower Nitrates in Aquariums: My Recommended Methods

The first thing you’ll need to do is figure out how high your nitrate levels have risen. Generalist test strips are great for monitoring water quality on a regular basis and ensuring things haven’t gotten out of hand.

However, when trying to diagnose a specific problem, I recommend using chemical specific test kits. These kits are usually more accurate.

Once you have tested your nitrate levels, water changes are the fastest and most efficient way to bring them back down.

Although 0 ppm is ideal, levels of 10-20 ppm are generally considered safe for most aquarium fish. If your water tests at 40 ppm, then you’ll want to do a 50% water change to bring things down to a safe zone.

I’d also combine that with reduced feedings for a week and then follow up with retesting and a second 50% water change.

As long as ammonia and nitrite remain at 0 ppm its clear your nitrifying bacteria are still doing their job.

Live plants are wonderful additions to your nitrifying cycle because nitrates aren’t consumed by your cycling bacteria.

Plants use nitrite as fertilizer and lock it into their substance to be released upon death and decay. Plants that grow quickly will absorb the most nitrate – Duckweed is a popular choice.

Be aware that it tends to grow explosively, carpeting the top of an aquarium, and can be difficult to remove permanently. Other choices include Anacharis and Water Sprite.

Heavy algae growth is another sign of high nitrate levels; without live plants to uptake the nutrient, the microscopic plants quickly take over. Live plants help shade out and compete with algae, bringing your tank back in balance over time.

If you find high nitrates to be a persistent problem, adding nitrate absorbing filter media will go a long way towards controlling the substance. API’s Nitra-Zorb is my favorite because it’s both inexpensive and rechargeable.

You’ll want to place the bags containing the media someplace where it will get constant water flow. The filtration outflow or near a powerhead will suffice but placing it within an overhanging or canister filter is the best way.

If the bag is too large, you can cut them open and use custom filter media bags to fit your filter.

To recharge products like NItra-Zorb, every 2 weeks, you’ll need to remove the bag and place it in a container containing salt water (see included directions for mixing ratios).

After approximately 2 hours you can return the bags to your filter.

If your fish bioload is particularly high, reducing your feedings is a good way to get a handle on the entire nitrogen cycle of the aquarium.

Most aquarists feed far too much as it is. A good rule for smaller fish is remembering that their stomach is roughly the size of their eyeball.

Also, if you see sizable amounts of leftover flake or pellets reaching the bottom, you’re probably overfeeding. Better to slow down and feed small amounts at a time rather than having uneaten food decaying within the substrate.

While nitrate is the least toxic element of the aquarium nitrogen cycle, it can be a real problem if allowed to grow.

Generally, it comes down to simple neglect: not doing water changes often enough, overfeeding, not changing your filter media regularly, and simply having too many fish are the most common causes.

Fortunately, you can easily reduce and remove high nitrates with the tips above!