Being showy, active fish, Bettas tend to put on a show at the top, middle, and bottom of the aquarium whenever you’re around. But once in a while you might find your Betta fish laying on its side.

What might that mean? It turns out that signals a serious problem…Or more neutral issues. Let’s take a look at some common reasons why Bettas lay on their sides.

Why is My Betta Laying On its Side?

Here are a few potential reasons why you Betta fish is laying on its side:

This is the most likely reason. Bettas have become so popular because they are hardy and can tolerate both poor water quality and a wide range of temperatures.

But the key word here is tolerate. They don’t thrive in room temperature bowls. In fact, these conditions open them up to all sorts of opportunistic diseases like ich and fin rot. Colder temperatures also slow their metabolisms, limiting their ability to properly digest food (see below).

Bettas are tropical fish from low-lying canals in Thailand where water temperatures rarely go below 73-75℉. Warmer is even better;78-82℉ is their preferred range!

By using a miniature heater in your Betta bowl or tank, you’ll see an immediate difference in your Betta. He should quickly perk up, eat more, and be much less prone to disease and lethargy!

Constipation is a major issue for tropical fish and Bettas are no exception. This typically occurs alongside cold temperatures (see above). Unlike mammals like us, fish are cold-blooded so their body temperature and metabolic rate is determined by their environment.

If you keep your Betta in cold water, his heartbeat, growth rate, immune response, and digestion all slow down. If he happens to have a particularly big meal one day, there’s a chance some of that food could rot inside his intestines before it makes its way out.

Bloating, sometimes mistaken for a swim bladder disorder, is the result. Your Betta may start floating or laying on his side.

What is the cure? Raising temperatures and feeding appropriately. If your Betta needs to remain colder then feed less frequently and in smaller amounts to prevent constipation.

If your Betta isn’t getting enough oxygen, he will be constantly exhausted with the effort of moving himself about.

This is actually a very uncommon problem. Unlike most fish, Bettas and their cousins the Gouramis have a specialized organ known as the labyrinth organ.

Notice how your Betta periodically goes to the surface to take a gulp of air. He’s directly breathing from the atmosphere as we do to supplement the oxygen taken in by the gills!

In the still, hot, weed-choked waters of his native Thailand, Bettas can thrive where other fish would suffocate due to the poor dissolved oxygen content.

Nitrite and nitrate poisoning may be the second most common reason why Bettas lay on their sides. Most aquarists are concerned with ammonia, which is the most poisonous fish waste product.

Since most aquariums don’t have the right conditions for denitrifying bacteria, nitrate then builds up until you perform a water change or plants use it for food.

However enough nitrate (30-50ppm) can cause problems even for hardy Bettas. Nitrate displaces oxygen in their blood hemoglobin (the pigment that makes blood cells red).

This turns their gills brown and prevents them from getting adequate oxygen. YOur betta will alternate between gasping for air at the surface and laying on its side at the bottom to conserve energy.

Fortunately, treating nitrate poisoning is fairly straightforward if you catch it in time!

It’s also possible that your Betta is sick with an internal or external parasite. Give your fish a close look to see if there are any signs of infection. Symptoms may include reddened blood vessels in the fins, skin, or eyes.

Thick mucus, bulging eyes or scales, discolored patches, and strange growths can all indicate that your Betta needs medication. 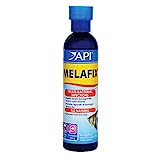 I prefer keeping a general purpose antibacterial agent like Melafix on hand. Melafix is ideal for bacterial infections that cause bloating, skin infections, fin rot, and more.

How old is your Betta? It’s possible that he’s simply entering into his Golden Years and needs an occasional rest!

When you see mature male Bettas in the store they are typically around a year in age. The average lifespan for both male and female Bettas is 3 to 5 years.

Males in particular tend to tire as they get older due to their heavy finnage. Often they take time to lie on a plant leaf or along the bottom. However they should quickly awaken if bored, poked, or it’s time to eat!

There’s nothing to worry about if your Betta has lived a long, happy life and likes to lay down on occasion!

This last possibility isn’t very common unless you keep your Betta in an aquarium with a filter. Sometimes a filter with an especially strong outflow can exhaust a Betta.

Remember these fish are native to slow moving and still waters. They don’t do well when forced to swim constantly. Captive Bettas also have much longer fins than their wild cousins, limiting their movement even further.

Adjust the current so your Betta either has still areas within the tank. Or better yet, the entire tank has reduced current so he can swim freely!

Signs Your Betta is in Good Health

Assuming your Betta is no longer laying on its side, here are some behaviors to look out for in a healthy male:

Watch this video for some more examples of how a healthy Betta should behave! Notice how aggressively the males engage both females and each other. Not a single one is laying on its side.

Should you find your Betta laying on its side, take that for the early warning sign that it is. Any one or several of the above reasons are the likely cause so take quick steps to fix the issue while you can.

Unless of course, your Betta is simply an older fish. In which case, enjoy him for his quirky nature and continue treating him well!