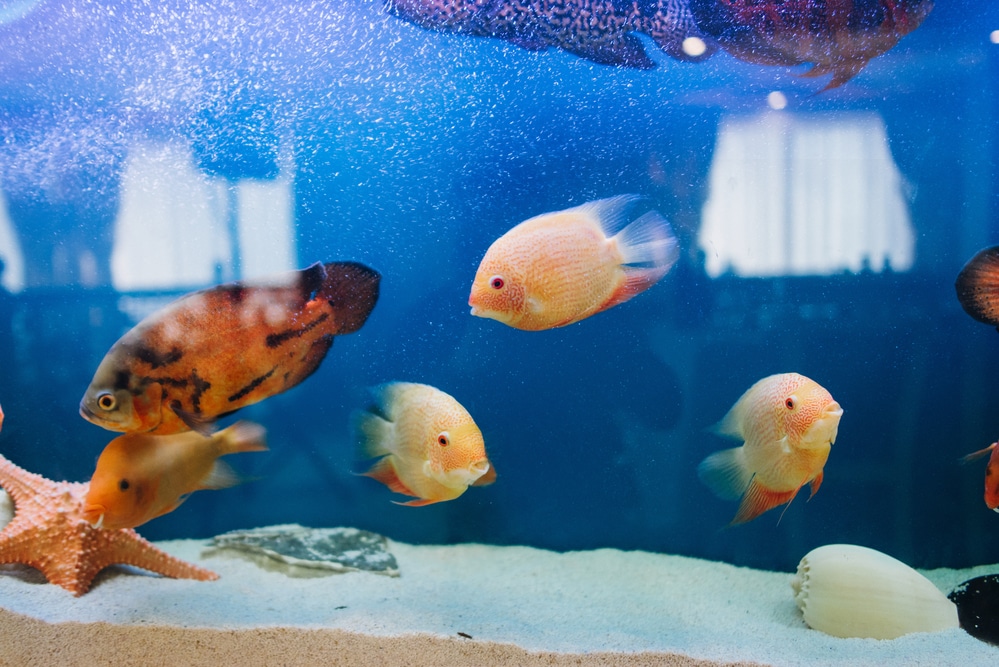 While the aquarium hobby has several rules taken as gospel, few are as more pervasive and potentially harmful than the ones surrounding the question of how many fish one can keep per gallon of aquarium water.

As we’ll see in this discussion, the question isn’t framed the right way.

How many fish you can keep is rarely a matter of inches and gallons, but rather behavior, biomass, and dimensions!

While this makes the discussion far more complicated there are easy ways to determine the right course for any fish tank.

The Common Myth: One Inch Per Gallon Rule

The rule introduced to nearly every new aquarist by well-meaning pet store employees and internet enthusiasts goes as follows: “Your aquarium can carry one inch of fish per gallon of water.”

I remember being told this when I was given my first aquarium by my parents and I’ve heard and read it countless times in the decades since.

It’s a neat, tidy rule that seems sensible, isn’t it? Unfortunately, it’s mostly to entirely wrong and can be actively harmful in many instances!

Why is Stocking One Inch Per Gallon so Harmful?

One inch per gallon doesn’t work because different fish are vastly different in mass and dietary habits. One 10-inch Oscar is not equivalent to 10 1-inch Neon Tetras in waste, space requirements, filtration needs, or food consumed.

While 10 Neon Tetras would find a 10 gallon aquarium comfortable a 10-inch Oscar would barely be able to turn around and would overtax most filters rated for a tank that size.

The number is probably closer to 100 Neon Tetras being equal to the mass and food requirements of one adult Oscar!

The Actual Volume of Your Aquarium

Another consideration that people may not consider is that the true volume of your aquarium is less than you may realize.

Substrate, decorations, and fish all displace space that water would normally fill.

A 10 gallon aquarium may be closer to 9 or 8 gallons if filled with rocks, substrate, and plants. Not to mention losses from evaporation that inevitably occur.

Tank dimensions should also be considered when looking at how many fish a tank can hold. Specifically large fish as well as fish with unique requirements for space.

If you want to house an Oscar, Pacu, or other large species, your aquarium should be at least half again as wide as the fish at maturity, with more space being ideal.

55 gallon aquariums (48″ x 12″ x 24″) are often recommended as the minimum for large fish. In terms of pure volume they are a good fit. However a 55 gallon tank is only 12″ wide; the same as the maximum size of an adult Oscar or other large cichlid.

A 75 gallon tank (48″ x 18″ x 24″) is far more forgiving, providing not only more volume for cleaner water but a wider turning radius for your fish.

Fish that school and swim fast also bust the “one inch per gallon rule.”

Giant Danios grow up to 4 inches long and love nothing better than to race around an aquarium as a group.

Silver Dollars can reach 6-8″ and also love to school. Pacu can reach 24″ and have the same tendency to not only swim fast but move as a group.

All of these fish should have long tanks to allow them to naturally race back and forth rather than demanding constant turns.

A final reason the “rule” works so poorly is because it ignores fish behavior like territoriality. Three 3-inch fish like Convict Cichlids would be a stretch but manageable for a 10 gallon aquarium.

However, one will likely end up dead once a male and female pair bond forms. Or worse, you get three males and two end up dying to the dominant fish.

Knowing how your fish interact with each other throws this rule out the window. If you want to buy Neon Tetras, Danios, and other schooling fish, you shouldn’t buy less than 6.

A single Neon and even a small group feels threatened and are in a constant state of stress because it leaves them wondering where the other Neon Tetras have gone.

Surely a large predator must be lurking nearby for the entire school to go into hiding.

So How Many Fish I Can Keep in My Aquarium?

Considering each of these elements is key to knowing exactly how many fish you can keep.

The unfortunate truth is that there is no magic formula here. You need to consider species needs like behavior and sociability, adult size, feeding requirements, filtration,and the actual volume and dimensions of your aquarium.

If you like small, schooling fish, you can actually keep more than one inch of fish per gallon so long as your filtration is good, you aren’t overfeeding and you’re consistent with your water changes.

15 Zebra Danios or 10 Platies would be right at carrying capacity for a 10 gallon tank.

Live plants also remove waste and add oxygen, further improving the potential bioload of an aquarium. 55 Neon Tetras in a planted 55 gallon tank would be light to moderate in bioload and immensely satisfied with their environment.

Just keep in mind that as fish length increases, body volume goes up exponentially, not doubled. A 2 inch fish may have four times the mass of a 1 inch fish. That’s (very roughly) four times the amount of waste released into the water as well.

A much better rule is to always err on the conservative side. Don’t seek to try and find the maximum capacity of your aquarium; a little bit of breathing room goes a long way to maintaining optimal water quality and healthy, stress-free fish!

The “one inch of fish per gallon” myth is one of the most common (and harmful) misconceptions in the aquaria hobby.

What’s even worse is that this rule is often used in many big-box pet stores when helping customers pick out fish – because let’s face it, the more fish they sell, the more money they make!

As we’ve explained above, there are many additional factors that you have to take into consideration when stocking an aquarium. Some of these factors include the adult size of desired fish, bioload, eating habits, other tank inhabitants, substrate type, and tank age.

We hope that this guide has helped a few of our readers avoid potentially harmful stocking suggestions – if you have any questions about whether or not your fish are fine in your current setup, feel free to send us an email and we will give you our suggestion!