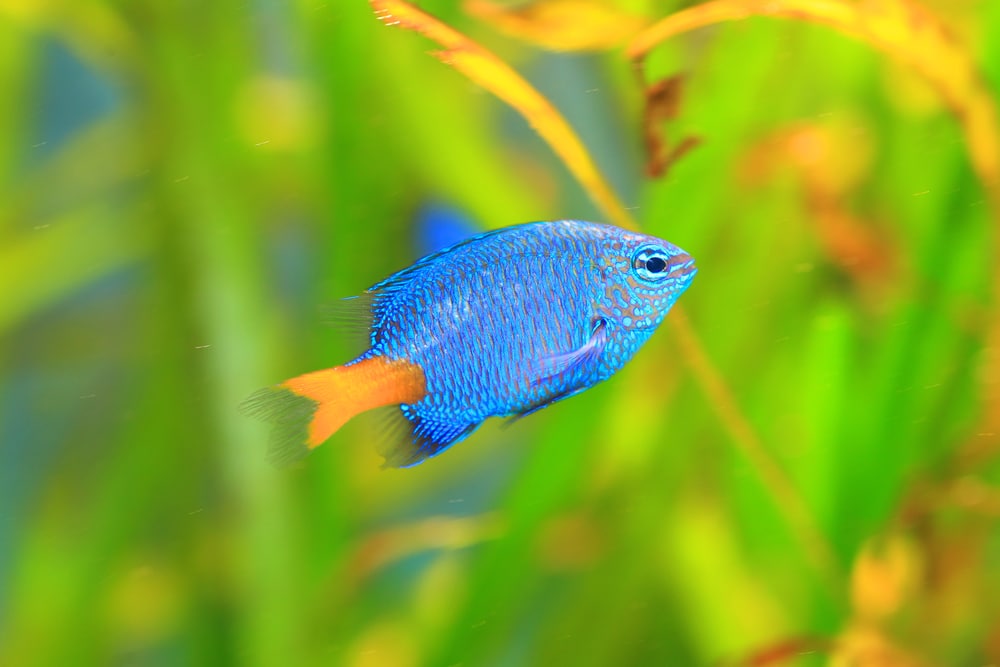 Damselfish are some of the first fish beginner marine hobbyists keep. Hardy, brightly colored, and easy on the wallet, they are perfect for a first time setup.

However they can be quite variable in terms of size and temperament. Some are small and peaceful while others are large and aggressive. And a few are small yet just as mean! So let’s take some time to get to know the different types of Damselfish so you aren’t surprised by their behaviors.

A Note About Clownfish

Clownfish are one of the most popular types of Damselfish and are part of the same family (Pomacentridae). However they rarely go by the name “Damselfish” so the association isn’t well known.

Some species, including the Domino Damselfish (Dascyllus trimaculatus), will also bond with Sea Anemones but only as juveniles and not as reliably as Clownfish.

Here are 10 popular Damselfish species that you may come across in your local fish store:

Chromis tend to be gentle, schooling Damselfish with little inclination to pick at their tank mates. However the Blue Reef Chromis one of the largest in the group, regularly reaching 5 inches in length.

Combined with their need for company they need slightly larger aquariums than the average Damselfish. A minimum of 30 gallons is best for a trio of Blue Reef Chromis. They will develop a hierarchy among each other but rarely do lasting harm in their brief fights.

Blue Reef Chromis are excellent dither fish for fish-only aquariums of medium to large marine species due to their size. And as hardy planktivores they readily accept any suitably sized protein-rich prepared or meaty live and frozen offering!

Green Chromis are extremely popular in the hobby despite their subdued coloration because they are hardy, peaceful, schooling, and will occasionally breed in captivity. Males take on a pale yellow tone during the nest-building phase of courtship.

Otherwise they vary from a mossy silver to a pale lime green in color. Green Chromis are especially long-lived, with 8 years being the norm and a few living to 15 years of age! Like most Damselfish they can be the first fish added to an aquarium that’s still cycling to create ammonia for nitrifying bacteria to consume.

Green Chromis are also excellent fathers. Once they spawn the male fans the eggs constantly, oxygenating them and guarding them from predators until they hatch.

Yellowtail Blue Damselfish are commonly recommended as the first aquarium fish for saltwater beginners. Small, vibrant, and inexpensive, they are one of the best types of Damselfish to start with!

Yellowtail Blues are fully grown at 2½ inches and are very mild mannered compared to their larger cousins. They occasionally nip and chase one another in territorial displays but these bouts are harmless. In fact they prefer being kept in groups of 3-5 individuals and tend towards shyness if kept singly.

A male and female pairing off is the only time you’ll see trouble from this species and even then only in smaller aquariums where their single brothers and sisters can’t get far enough away.

As juveniles they are one of the few non-Clownfish Damsels to associate with Sea Anemones, specifically Stichodactyla (carpet anemones). They will also group near live stony corals, protecting them from grazers and retreating into the branches and stinging tentacles if predators come close.

As they age they lose their striking black and white tones. The white spot fades or disappears entirely and the Domino turns almost entirely slate grey. They also become quite vicious, chasing around any fish unwilling or unable to fight back or leave their turf.

Despite the dull adult appearance and bad temper they tend to grow on most aquarists. Domino Damselfish are chunky, active fish that are the first to the top to feed and even give “good natured” bites at hands that enter the water to clean or arrange decorations.

They will accept any fresh or prepared foods provided. However as true omnivores they should be given a mixture of animal and plant-based foods.

Like many marine fish the Neon Velvet Damselfish goes through a dramatic color change as it grows. Juveniles have a rich velvety black base with a pale shoulder crescent and delicate blue stripes on the face and back. As they mature these colors all fade; the crescent expands to take up most of the back and the belly remains black to dark grey.

Neon Velvets also become increasingly aggressive with age and considering their size they can do damage to fish unable to escape their attention. A single adult should be kept in nothing smaller than 55 gallons with plenty of live rock and coral for peaceful fish to break line of sight.

Despite these shortcomings Neon Velvet Damselfish are some of the hardest fish to kill in the hobby. They are tolerant of a wide range of water conditions and are omnivores that will accept any fresh or prepared foods provided!

The Azure Damselfish is one of the most dramatically patterned of the commonly available types of Damselfish. When kept under bright actinic lighting the blue scales flare dramatically, taking on metallic undertones. This makes them particularly great for well lit reef aquariums.

They are on the less aggressive end of the spectrum and save most of their attention for one another. Best of all, Azure Damselfish are being bred in large numbers for the aquarium hobby. Buying captive-bred takes pressure off of wild stocks that are struggling due to pollution and coral bleaching events.

If marine conservation is something you’re passionate about as a hobbyist, consider implementing these 9 Simple & Easy Lifestyle Changes to Help Stop Ocean Pollution!

The Damselfish graze not only on skin parasites but also algae from their shells. The fish get an easy meal while the turtles get a reduction in drag that boosts their swim speed over long distances.

Sergeant Majors get their name from the bold vertical bars reminiscent of a military commander’s insignia. And in the aquarium they are just as bold, even as small juveniles. Unfortunately they have the Damselfish habit of getting intolerant and mean as they grow up.

Sergeant Majors are on the larger side and should be kept in fish-only setups with other aggressive species like Triggerfish and Angelfish.

As the State Marine Fish of California the Garibaldi is a show-stopper that finds a place in many public aquariums in the Golden State. The name “Garibaldi” is a historical reference to Giuseppe Maria Garibaldi, an Italian revolutionary whose followers wore scarlet shirts and were called Garibaldini.

Garibaldi are the largest types of Damselfish, reaching up to 15 inches in length. As juveniles they have starry blue spots mixed in with their gold flanks that eventually fade as they mature. They are found in cool water reefs and kelp forests along the Eastern Pacific.

Despite being native to the US they are a protected species. Wild caught individuals occasionally come from Baja California however they are rare and expensive compared to other Damselfish.

The main challenges in keeping them (besides finding one) is ensuring your aquarium is both large and cold enough. Garibaldi need temperatures no warmer than 70F and do better in even cooler temperatures, making a chiller necessary in some climates.

These three Damselfish are tiny yet equally mean cousins to the Domino Damselfish. Hardy and easy to find in stores, many unsuspecting aquarists buy one or a group, not realizing that all Dascyllus are some of the most aggressive types of Damselfish.

Small Wrasses, Pygmy Angelfish, and Tangs can usually hold their own but keep them away from smaller Clownfish, Gobies, and other peaceful marine fish.

Of these the Four-Stripe Damselfish is arguably the most striking, with a milky silver and deep black tone that doesn’t fade as they grow. All three are excellent first fish to add to a cycling aquarium and will accept any prepared or fresh food you provide.

Unlike many Damselfish sexing Blue Devil Damselfish is fairly easy. Males have yellow to orange edges along the tail fin. Males are often sold as Orangetail Blue Damselfish however they are the same species as those without vivid tails.

While fairly large Blue Devil Damselfish aren’t as aggressive as their name suggests. So long as they have a territory to claim and there’s space for their tank mates to keep clear of it Blue Devils keep to themselves.

However they are a bold, showy species that will be first to the surface when it’s time to eat!