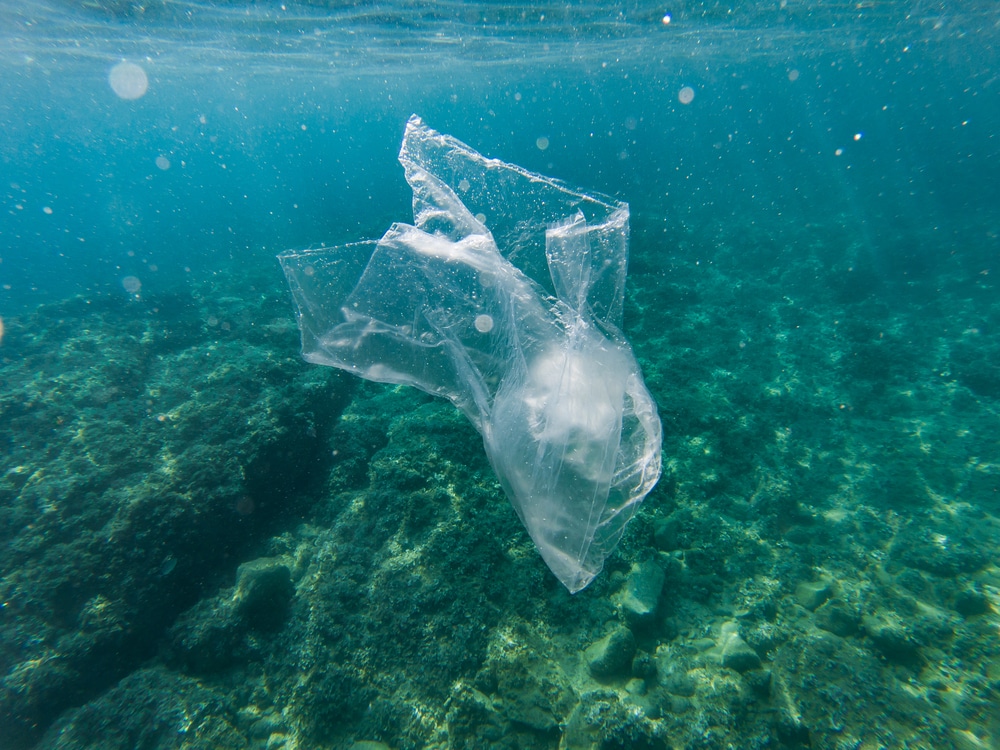 There are approximately 150 million tons of plastic in the ocean. The equivalent of a garbage truck loaded is added every minute. If we keep this up, there will be more plastic than fish within 30 years.

But plastic isn’t the only pollutant; National Geographic reports that billions of pounds of garbage are dumped into the ocean every year. Chemicals and toxic waste are also hazards that enter waterways and interfere with marine life.

If humans are contributing to pollution, it would make sense that they could do something to stop it. You don’t have to join in on an ocean cleanup to help stop ocean pollution. Seemingly insignificant lifestyle changes can make a big impact.

Using fewer single-use plastic items is one of the most significant changes that you can make to reduce ocean pollution. Plastic water bottles are a major culprit. Americans use 1,500 water bottles every second.

“But I don’t litter,” you say. Even if you dispose of your plastic water bottles properly, they could still end up in the ocean. Waste mismanagement and illegal dumping are the main reasons that water bottles still make it to our waterways.

Even if you put your plastic water bottles in the recycling bin, it doesn’t necessarily get recycled. There are so many problems with our recycling processes that many countries dump recyclables illegally, where they could end up in the oceans. Many organizations incinerate the plastic, a process that may prevent pieces from migrating to the oceans but puts toxic chemicals into the air.

Recycling isn’t enough to put an end to ocean pollution and the world’s waste crisis – we need to stop using so much single-use plastic altogether.

One way to do this is to reuse water bottles. Fill them up from the tap. However, if you do purchase water from the store, buy gallons or larger containers instead of smaller bottles. Better yet, consider using refillable 5-gallon water dispensers.

You can make other small changes by:

Plastic straws are just as problematic as plastic bottles. They are among the top items that are collected during coastal cleanup efforts.

Straws add to the island of trash that’s in the ocean. They also pose a threat to marine animals. Sea turtles are likely dying as a result of ingesting plastic. Seals can choke on straws.

Even though straws might be recyclable, they’re too lightweight to make it through the sorting system at many facilities. They could end up with the garbage or taint an entire load of recyclables.

But most of the straws that end up in the ocean get there from human negligence. People leave their garbage on beaches, or straws blow off of boats and other watercraft.

Many communities are making an effort to skip the straw altogether. Using a straw is optional in most cases. If you do have to use a straw, you can purchase a reusable one that’s made of stainless steel or silicone.

Compostable straws aren’t always the best option. Although these are designed to decompose in a composting facility, they’re often disposed of incorrectly and end up polluting the ocean.

Be Careful When Using Chemicals on Your Lawn

Many homeowners and renters want to boost their properties’ curb appeal. In many parts of the U.S., a lush, green lawn is part of the American Dream. But fertilizers and weed killers hurt the Earth more than they help your lawn.

Have you ever noticed that the area on the curb or street near your home is stained orange? That’s from the iron in the fertilizer that runs off of your lawn. The grass can’t soak up all of the chemicals, and the excess pollutants flow into the sewer and drainage systems.

When these chemicals build up in waterways, they cause algae blooms. Sometimes, those algae blooms make it impossible to pass through the waterways. As the algae die off, they use up the existing oxygen in the water to decompose.

This limits the amount of usable oxygen that other creatures need to survive. Aquatic species relocate to other areas, and the oxygen-depleted regions become known as dead zones.

Fish also absorb the chemicals. If humans or other animals eat these fish, they’ll ingest the toxins too.

The EPA says that you can be more careful with the chemicals that you use in your yard by:

If you eat organic foods, you support practices that minimize ocean pollution. Organic items are grown without the use of synthetic fertilizers and pesticides.

Organic soil also holds onto carbon dioxide, keeping it out of the waterways. This reduces the problem of ocean acidification.

When you hold your breath, your body eventually forces you to breathe out. This is not because you’re not getting enough oxygen. It happens because your body’s pH level changes due to the increase in carbon dioxide.

Carbon dioxide is changing the chemistry of ocean water. The natural pH of seawater is about 8.2. It’s alkaline.

But the ocean has become more acidic since the industrial revolution. Because the oceans absorb carbon dioxide, they soak up the emissions that are produced by cars and factories. When carbon dioxide mixes with water, it results in an acidic solution.

Sea creatures such as lobsters, oysters, clams, and plankton have shells that are made of calcium carbonate. The ocean’s acidic environment can dissolve those protective shells.

Corals require calcium carbonate for their survival. Coral reefs house as much as 25 percent of the fish species on the planet. They also contribute to the world economy by providing beautiful environments for snorkelers and scuba divers to explore.

Eating organic can help coral reefs thrive by reducing the amount of carbon dioxide that makes its way into the oceans.

If you’ve read this far, you probably scowl at people who litter. You certainly don’t do it yourself. If you do litter, stop now.

Picking up after yourself is one thing. You can also help others do the same. If you go to the beach with friends, make sure that everyone carries out their trash. Bring a bag with you when you head outside so that you can collect and discard pieces of trash that you find.

Join or organize a cleanup in your community. Schools and other organizations can band together to help keep the beach and green spaces in your town litter-free.

Pretty much the only thing that should go down the toilet is toilet paper. If you’re flushing anything else, you could be harming the ocean.

Here are some products that you’re not supposed to flush:

If you smoke cigarettes, dispose of the butts properly. That means that you should toss them in the trash.

Cigarette butts are the greatest source of garbage in our oceans. Cigarette filters are made mostly of cellulose acetate, a type of plastic. They can take more than ten years to decompose.

But many smokers don’t think twice about grinding a used cigarette into the ground with their toe and leaving it there. About 66 percent of cigarette butts are disposed of inappropriately every year.

If you smoke, consider using a personal ashtray to hold your butts until you can discard them responsibly. Don’t flush cigarette butts down the toilet, either.

Many household cleaners contribute to pollution. When you dispose of them improperly, such as by pouring them down the drain, you increase the risk that they’ll end up in our waterways. Even just mopping your floor with a chemical solution and rinsing it in the sink can exacerbate the ocean pollution problem.

Try using natural alternatives to chemical cleaners. Some ideas include:

Sewage treatment plants can become overwhelmed when they’re inundated with excess water. When communities use too much water at once, pollutants can make it through the processing system and end up in the oceans.

Use less water at home by:

Why Is the Ocean So Important?

Why is it such a big deal that the ocean is littered with garbage? The ocean supports life on Earth. It doesn’t just provide a home to marine life; it’s essential for human life.

Up to 85 percent of the oxygen that we breathe is produced by phytoplankton, small ocean plants that live on the surface of the water and emit oxygen through photosynthesis. Pollution threatens the survival of phytoplankton. It influences the organisms’ abundance and growth.

Pollution is harming the entire marine ecosystem and all the animals, including humans, that rely on it for their survival. The ocean houses 97 percent of the planet’s water supply. It also absorbs 30 percent of carbon dioxide emissions.

Moreover, people depend on the ocean for income. Approximately 17 percent of jobs in the U.S. are marine-related. Ocean recreation and tourism make up at least $128 billion in GDP.