Aquascaping often uses stones for decoration. However not all stone is created equally.

Seiryu Stone just might be the king of aquascaping materials and is used worldwide for planted and hardscape aquariums.

But what is Seiryu Stone and why is it so popular? This guide covers everything you need to know about Seiryu stone and how you can effectively use it in your aquarium.

What Is Seiryu Stone and Why Should I Use It?

Seiryu refers to the Chinese Azure Dragon, a mythological constellation whose blue scales surely inspired the naming of this rock. In the West it also goes by the names Dragon Stone, Yin Stone, and Blue Dragon Stone.

While Seiryu Stone has been popular in Japan for centuries it found fame with the rest of the world when Takashi Amano introduced his Nature (Amano) and Iwagumi aquascaping styles. 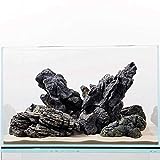 Seiryu Stone has a striking bluish grey character that’s hard to find in rocks. Grey and whiite veins of calcite add focal points in an aquascape as does the jagged grain that invokes rocky outcroppings and mountain cliffs.

When used in aquarium aquascaping Seiryu provides a dramatic contrast to the vivid greens of live plants and punchy colors of fish that’s hard to match, especially under high powered plant grow lights.

A lot of the Seiryu Stone you see for sale outside of Japan is actually Ryuoh Stone. Rather than the delicate blue undertones of true Seiryu, Ryuoh is more of a slate to dull grey in color with less white marbling.

While still a nice rock and commonly used in Iwagumi and Nature Style aquascapes as an affordable alternative Ryuoh Stone really can’t compare to Seiryu.

When using rocks in aquascaping you need to be aware of the effects they can have on chemistry. Many stones contain carbonates, acids, and other elements that will cause minor to dramatic shifts in water chemistry.

Fish, plants, and invertebrates can be sickened or even killed with the wrong stone. As a very general rule of thumb, igneous rocks like granite tend to be inert while sedimentary and metamorphic rocks like limestone and marble tend to affect water chemistry somewhat.

Seiryu Stone, a metamorphic rock, is a bit troublesome because it has a strong effect on the pH of aquariums. To be precise, it contains calcium carbonate, both of which impact the GH (Calcium/Magnesium concentration) and KH (carbonate concentration) of an aquarium.

Taken together you’ll see an increase in pH and water hardness using this rock.

While neutral water in equilibrium with atmospheric CO2 (a weak acid) will show a slow increase in pH the various tannins and other molecules in most aquariums will accelerate leaching of calcium carbonate from Seiryu Stone.

Many fish, such as Livebearers and Rift Lake Cichlids, actually prefer hard water so the alkaline inducing effects of Seiryu Stone can be seen as a bonus. There are a couple of techniques you can use to mitigate this effect if you

Since calcium and carbonate levels will continue to rise regardless of what you do, water changes are the simplest solution. So long as there aren’t significant sources of acidity in your aquarium your pH won’t shift too dramatically.

Your usual small weekly water changes should be sufficient to mitigate the alkaline shift without impacting your fish and plants negatively. However if you tend to go longer between water changes the drastic shift in hardness can cause issues if you do massive water changes.

Another way to counteract the alkaline buffering capacity of Seiryu Stone is to include Driftwood, Indian Almond Leaves, Alder Cones, or better still, an acidic substrate like peat moss or ADA Aquasoil.

Aqua Design Amano (ADA) were the ones to popularize Seiryu Stone to begin with. This planting substrate helps maintain a pH more suitable for Cardinal Tetras, Cherry Shrimp, and the other inhabitants Amano often paired with Seiryu. 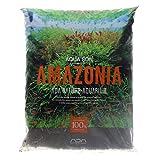 Made from decomposed leaf mulch, both Aquasoil and Peat Moss are rich in humic acid. On the downside adding acids also accelerates the release of alkaline agents from within the stone, both of which are removed during water changes.

Carbon dioxide (CO2) is usually injected into planted aquascapes for lush live plant growth. It is also an acid when dissolved in water and helps push the pH back towards neutrality.

If you’re uncertain whether a stone will impact water chemistry I recommend either an acid or soak test before adding them to your aquarium!

Acid tests involve using concentrated vinegar, pH lowerer, chemistry kit acids, or even muriatic acid (which has other uses below). Clean a section of your rock thoroughly and then dry it completely. Add a few drops of your acid solution and watch for fizzing to arise.

If your rock has marbling or other sections that may be different in composition ensure you place drops on these regions as well.

Here is an example of the acid test in progress using the acid found in aquarium Nitrite testing kits!

The second method is the soak technique. Simply soak your rocks in a bucket of distilled or reverse osmosis water (pH neutral) for a week. Once the week is up, test your water to get an idea of the effect they’ll have on acidity or alkalinity.

While water chemistry can be tested using individual pH, ammonia, and hardness kits, I prefer master test kits because they include every parameter I might need for less money than buying them all separately.

When aquascaping with Seiryu Stone I prefer to follow the guiding principles of Iwagumi Aquascaping, which emphasize hardscape elements more than any other style.

Three major rock formations form the foundation for the Iwagumi Aquascape: the Oyaishi, or keystone rock, Soeishi, secondary stones, and Fujiseki, tertiary stones scattered across the tank bottom in an attractive yet natural seeming way.

As you might guess, the Oyaishi is the largest stone and is usually placed off-center in a nod to natural aesthetics over the more formal preferences of most gardening techniques. The Soeishi may be placed opposite of the Oyaishi or even nearby in a deliberately imbalanced composition.

Iwagumi Aquascaping is very minimalist in character and allows the distinctive marbling and shape of Seiryu Stone to shine without distraction from a crowded, chaotic canvas. Dutch, Jungle, and even Nature Aquascapes can detract from the beauty of high quality Seiryu.

Seiryu Stone works equally well with dark and light substrates. If you prefer brown or black substrate the white marbling will stand out more while the entire rock will shine paired with white sand or pale gravel. It depends entirely on your preferences!

Where to Buy Seiryu Stone

Unless you plan on taking a trip to Japan Seiryu Stone can be hard to come by. Most pet stores don’t carry it and many online distributors cater to the high end aquascaping community and price it accordingly.

Several online distributors carry true Seiryu Stone for sale. You do have the slight downside of not being able to choose pieces for yourself.

However for sheer convenience of online stores can’t be beat as only specialty aquarium stores carry Seiryu Stone.

Muriatic acid (hydrochloric acid) can be found at any pool supply or home maintenance type store. Immersing Seiryu Stone in muriatic acid for 5 to 10 minutes deepens the blue gray tones to black with stark white marbling that’s even more beautiful!

Some sources claim acid treating Seiryu neutralizes its alkaline buffering capacity but this isn’t true. Seiryu Stone will continue to either gently or quickly raise pH depending on acidity and other elements in your tank.

While the process is simple, remember to wear protective eye and hand protection because muriatic acid is extremely corrosive and will damage skin. The fumes are also corrosive and can cause nasal and lung irritation if inhaled directly.

After the short acid bath use tongs to remove your Seiryu Stone from the solution and place your pieces in a bucket of pure water for 15 minutes to neutralize the acid. At that point it’s entirely safe to use for aquascaping and even more vivid in color!

Some retailers even acid treat and sell Seiryu Stone, saving you the effort.

While there are dozens of rocks commonly used in aquascaping Seiryu Stone just might be the most appealing. Dramatic in form and appealing in color, it is perfect for most aquascapes and goes well with nearly any fish, plant, and substrate combination.

While managing the chemistry aspects of Seiryu takes a bit of research I find it’s well worth the effort as well! Let me know if you end up choosing Seiryu Stone for your next project; I’d love to hear from you!

1 thought on “Seiryu Stone for Aquariums: Everything You Should Know”