German Blue Rams are some of the smallest commonly available cichlids. While not nearly as feisty as some of their larger relatives you want to have some care about what fish you keep with them. Here are my 10 top suggestions for your next German Blue Ram tank mates!

Here are 10 of our favorite Ram cichlid tank mates:

Danios as a group are excellent German Blue Ram tank mates. Peaceful, active, and hardy, they can find a place in any aquarium.

While Zebra and Giant Danios are some of the more popular species, have you considered something a bit more exotic? The Celestial Pearl Danio (or Galaxy Rasbora) is a vividly patterned species that’s a little more shy than the others but offers a significant boost in color.

They were recently discovered in 2006 and are quite popular now, especially for planted aquascapes. Like all Danios the males will display and spar but never cause harm to one another. Celestial Pearls should be kept in schools of at least 6 individuals and fed a mixture of prepared and tiny frozen foods like brine shrimp!

Some of the easiest to find include Apistogramma cacatuoides and A. borelli but there are not only several species but many tank bred and regional color morphs to choose from!

As micro predators Apistogramma need a variety of small live and frozen invertebrate foods alongside the usual prepared options. While not especially aggressive Apistogramma are still cichlids. They will be territorial and will occasionally chase intruders, especially other cichlids like Blue Rams.

And when breeding expect the pair to become even more intolerant. So long as your tank is larger than 20 gallons and you have plenty of plants and rocks to break line of sight your breeding Apistos shouldn’t give your other fish too hard a time.

Killifish are some of my favorite yet least appreciated fish. Since they have unusual breeding habits and short lifespans most annual Killifish are somewhat rare in the hobby. Annuals come from seasonal streams and ponds that dry up for part of the year.

As a result their motto is live large and fast; they grow from drought-resistant eggs to sexually mature adults in just a few weeks!

Other Killifish are semi-annual to non-annual: they come from permanent bodies of water and are egg scatterers like most fish. These Killis also tend to live longer as a result. Nearly all Killifish are tiny carnivores that hunt down worms, plankton, and tiny crustaceans.

Bettas are some of the most popular fish in the world and one that does well as a German Blue Ram tank mate. Aquarists see Bettas in their lonely cups and assume they are too aggressive to live alongside other fish.

The truth is that Bettas are mostly aggressive towards one another and mostly male to male. They mostly ignore other fish except when defending a bubble nest. Bettas actually need defending on occasion because many fish find their flowing fins tempting targets.

German Blue Rams aren’t major fin nippers but Barbs and larger Tetras often do so. Female Bettas and wild-type Bettas may be a better choice if your Rams are a little more aggressive!

Gold Tetras are some of my favorite tetras: they’re as beautiful as Neon and Cardinal Tetras yet uncommon enough to warrant a second glance from experienced aquarists. The gold dust color actually comes from guanin secreted by specialized cells to defend against skin parasites.

Gold Tetras can be a little more sensitive because many are wild-caught fish. Wild fish can be easily stressed by sudden water chemistry shifts or poor quality food. Try to keep conditions as close to the Amazon as possible: pH 5.5-7.0, elevated temperatures (78-82F) and soft water.

It’s worth noting that the gold dust color is strongest in wild specimens. Tank bred fish and 1st generation fry tend to be less intensely colored. The reasons aren’t fully understood but it’s theorized that the relative lack of parasites in aquaria don’t provide the necessary stimuli for the gold dust color to fully express itself.

Rummy Nose Tetras are another slightly uncommon species for aquarists looking for something other than Neons or Serpae Tetras. Like most Tetras they are fine tank mates for German Blue Rams: they are peaceful, schooling, and eager eaters of anything appropriately sized.

Rummy Nose Tetras are blackwater fish; they prefer very warm, very soft, acidic water for best color and breeding (pH 4.0-6.0, temperature 80-84F). However many are tank bred nowadays and will tolerate conditions up to neutral and even slightly alkaline.

Other blackwater fish that can live with both them and German Blue Rams include Bristlenose Catfish, Discus, and Cardinal Tetras!

Bottom dwellers are sometimes neglected in favor of the single Pleco as an algae eater. However the Kuhli Loach is an intriguing choice for the small fish community tank. These worm-like fish like nothing more than heavily planted, fine-grained substrates to burrow through in search of Tubifex worms and lost flakes or pellets.

Keep in mind that they are crepuscular (active during dawn and dusk) so you may not see them often. And if your substrate is fine enough, you may go days without seeing them, only to be suddenly surprised when your Kuhli gets hungry enough to feed during the day. 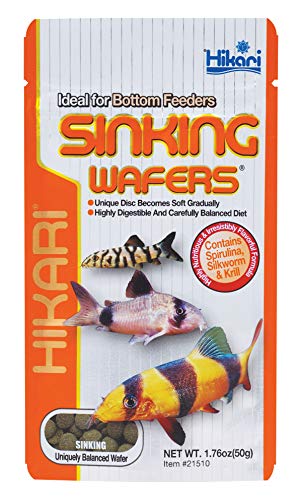 Instead of making them scrounge and starve, provide sinking wafers right before the lights go out. Kuhlis also enjoy frozen invertebrates like bloodworms and brine shrimp, which provide extra fat and protein to fuel egg production!

While the wild Gold Barb is a greenish, subdued species the variety commonly seen in stores was originally cultured in China, home of the equally colorful Goldfish. And like Goldfish, Gold Barbs are omnivores that eat anything small enough: detritus, soft plants, invertebrates…Anything is fair game!

Combined with their hardiness and ease of breeding it’s no wonder the Gold Barb is so popular. They also don’t lose their metallic sheen, unlike Gold Tetras.

Gold Barbs can sometimes be on the shy side, so provide them plenty of plants, either live or plastic, to hide within. They are also schooling fish; a group of 4-6 individuals will be much more willing to explore in the open compared to a single lonely Barb.

Most of the smaller Gourami species are great German Blue Ram tank mates: Honey, Chocolate, Sparkling, and more. However the Dwarf Gourami is both the easiest to find and the most colorful.

Many of their color morphs look very similar to German Blue Rams, including the Powder Blue morph. Dwarf Gouramis are midwater to surface dwelling fish and are very peaceful even when breeding. Males will display to one another and potential mates but rarely harm each other.

You’ll need still surface water if you decide to breed them, to avoid disrupting their fragile bubble nests. Dwarf Gouramis also come in a wide variety of color morphs; from Sunset and Powder Blue to the wild-type variety, all are striking to beyond.

Dwarf Otocinclus are some of the best algae eaters for small fish community tanks. They aren’t nearly as territorial as larger suckermouth catfish and prefer being kept in small groups.

Like most Loricarid catfish Dwarf Otos are mostly vegetarian: algae, slightly decayed plant matter, biofilms, and blanched vegetables will all be eaten with relish!

Make sure you provide regular supplemental feedings once the algae runs low. Otos get nicely rounded bellies like a tadpole when full so make sure they aren’t looking constantly skilly.

It’s difficult but not impossible to get them to breed in aquaria. They need soft water conditions, plenty of algae to graze on, and thick live plants to scatter their eggs among. Mature planted aquascapes are the best place to breed Otos!