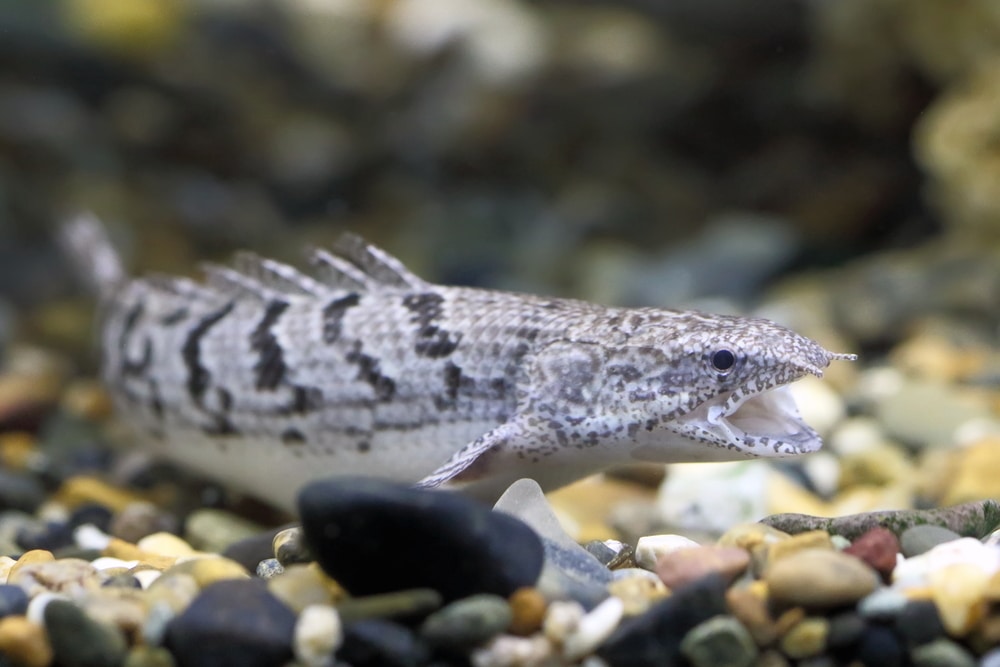 Large predators are some of the most difficult fish to build a community around. While Bichirs aren’t especially aggressive they do grow large and have mouths and appetites to match. So here are some of the best tank mates for Bichirs that will add some variety while avoiding being eaten!

Here are 10 of our favorite tank mates for Bichirs:

Despite their name the Peacock Bass is actually a large Cichlid from South America. However they have been introduced to South Florida and Puerto Rico so you may see one in the United States!

Unlike most large Cichlids, Peacock Bass aren’t territorial nor do they dig. They are open water and ambush predators that live much like North American bass. Their large mouths enable them to swallow some massive prey however the largest Bichir species such as the Ornate Bichir (Polypterus ornatipinnis) are safe.

Considering how large they grow you’ll need at least a 200 gallon tank for an adult. However they are some of the most personable fish you can own. They recognize their owners and will splash for treats and aggressively display if other people approach the tank!

Oscars are probably the most popular large Cichlids in the world and for good reason. They are very hardy, beautiful, personable, and come in a variety of attractive red-based tones.

While nowhere near as large as Peacock Bass, Oscars are still large predators so be careful when keeping them with smaller Bichirs. However any of the medium to large species are excellent tank mates.

As South American natives Oscars prefer soft, slightly acidic water (pH 5.5-6.5). However they have been tank bred for decades and will thrive even in alkaline conditions. 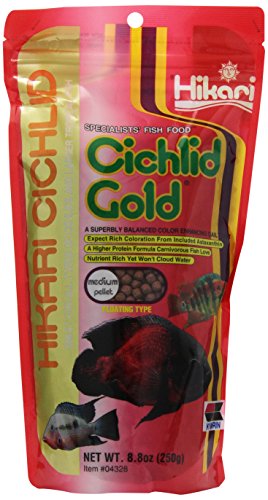 Oscars should be given a mixture of fresh items like earthworms and feeder fish alongside high quality protein-rich pellets. Bichirs eat exactly the same thing. However they aren’t surface feeders so you may need to use feeding tongs to ensure your Oscar doesn’t greedily devour everything!

Black Ghost Knife Fish are excellent tank mates for Bichirs despite being bottom dwellers. While predatory, Black Ghosts have smaller mouths and are rarely a threat to any fish near their size. They prefer hunting for worms and smaller fish.

In terms of temperament, Black Ghost Knifefish are pretty unusual. They are mostly nocturnal and prefer to stay hidden during the day in a cave or under a driftwood overhang. As a result they are rather shy – however they are also territorial because they’ll aggressively defend their lair from intruders!

PVC pipes are the best hideouts for them because they block light and help partially insulate your Knifefish from the electrical signals of passing fish.

Despite their nocturnal habits and poor eyesight, Black Ghosts are electrical fish! They generate a weak current that helps then navigate in total darkness and find sleeping fish hiding in rocks and plants.

Another African bottom dweller that gets along well with Bichirs is the Elephant-nose fish. They are fairly easy to find in the trade sold as 3-4 inch juveniles. As adults they are medium sized and need at least 55 gallons of space.

While they are carnivores their small mouths ensure only the smallest of fish are at risk of being eaten. Elephant-nose fish are also weakly electrical, using a specialized muscle in their tails to generate a bodily current. They have electroreceptors in their skin and “trunk” to detect worms and other items hidden in the substrate.

Being diggers, they should be given sandy or silty substrates as gravel can harm their delicate “noses.” While peaceful, Elephant-nose fish are very territorial and intolerant of one another in anything except the largest of aquariums.

Interestingly, the Elephant-nose and other Mormyrid fish have the largest brain to body ratio of any fish; equivalent to a human! How well this translates into higher intelligence is still being studied.

When keeping smaller species like the Senegal Bichir (Polypterus senegalus), large Tetras are excellent tank mates for them. The Blind Cave Tetra is a fascinating species from North America that typically spends its entire life underground.

As a result they have evolved over thousands of years from trapped Mexican Tetras. The cave form lost its eyes and pigmentation as both were unnecessary. The blind form relies exclusively on smell and the sensitive lateral line to detect movement and changes in water pressure.

Blind Cave Tetras are on the larger side and can grow up to 5 inches. Since they have no eyes they are active during both the day and at night. Smaller fish may end up being nipped while sleeping however the well-armed Bichir is too large and tough to be bothered by them.

Green Terrors can be a bit too much for Bichirs, especially when breeding. However the Blue Acara is a smaller, gentler relative that’s a much better match. Acaras are too deep-bodied to be eaten yet are very mild tempered.

Blue Acaras do like to dig but are fairly gentle on plants. When breeding they will ramp up their aggression in true Cichlid fashion however so ensure your tank is at least 55 gallons in size to give the new parents some room.

Recently, an Electric Blue color morph has become extremely popular as well. Like most highly inbred fish they tend to be more sensitive to abrupt shifts in water quality. So only add them to stable, mature aquariums.

Leopard Ctenopoma are also known as the Leopard Bush Fish or Leopard Leaf Fish. They belong to a family of fish known as Climbing Perch as some of their relatives will leave the water for short distances using their labyrinth organ to breathe air.

Ctenopoma are ambush predators that use their camouflage pattern to blend into the dappled shade among thick weeds. Once a suitably sized fish passes close by they strike, extending a suddenly massive mouth outward to suck their prey in.

As equatorial African fish Leopard Ctenopoma prefer soft, slightly acidic water and elevated temperatures (77-84F). Like their Asian cousins the Gourami and Betta, Ctenopoma are bubble nest builders and care for their eggs and fry for an extended period!

Surface dwelling fish are some of the best tank mates for predatory Bichirs. African Butterfly Fish are Arowana relatives with very unique habits. They mimic fallen leaves and debris while waiting for small fish and fallen insects to drift nearby.

African Butterfly Fish are also highly capable jumpers so make sure your lid is very secure! As predators highly sensitive to movement they are very hard to train onto pellets or flakes. You should feed them feeder Guppies, live Tubifex, and especially small insects like crickets.

Make sure you only keep them with smaller Bichirs as larger species may try to eat even an adult Butterfly Fish once fully grown.

Freshwater sharks aren’t true sharks but have a very similar appearance. The majority are on the peaceful side however the Black Sharkminnow is somewhat aggressive. So long as you give both it and your Bichir a place to hide disagreements should be infrequent.

Black Sharks are also omnivorous and love soft plants and parboiled vegetables to gnaw on along with prepared flakes and pellets. They do grow even longer than most Bichirs and are very deep bodied. Your aquarium should be at least 200 gallons in volume for this stately Cyprinid.

Since they are almost exclusively bottom dwellers, any peaceful tank mates that inhabit the middle to upper water column are safe, including Silver Dollars and Arowanas.

Hoplo Catfish are some of my favorite underappreciated fish species. These South American natives are in the same family as the popular Corydoras. However they grow much larger, making them excellent tank mates for predatory Bichirs.

Hoplo Cats are well armored enough to stand the occasional nip from an aggressive Bichir or Cichlid. And much like their Corydora cousins they are very active, patrolling all levels of the water column hunting for food.

Since you’ll be keeping them with larger fish, make sure your mix in smaller pellets and frozen food suitable for the small-mouthed Hoplo Catfish. They are also nest builders, using a combination of bubbles and plant material to house their eggs after spawning!