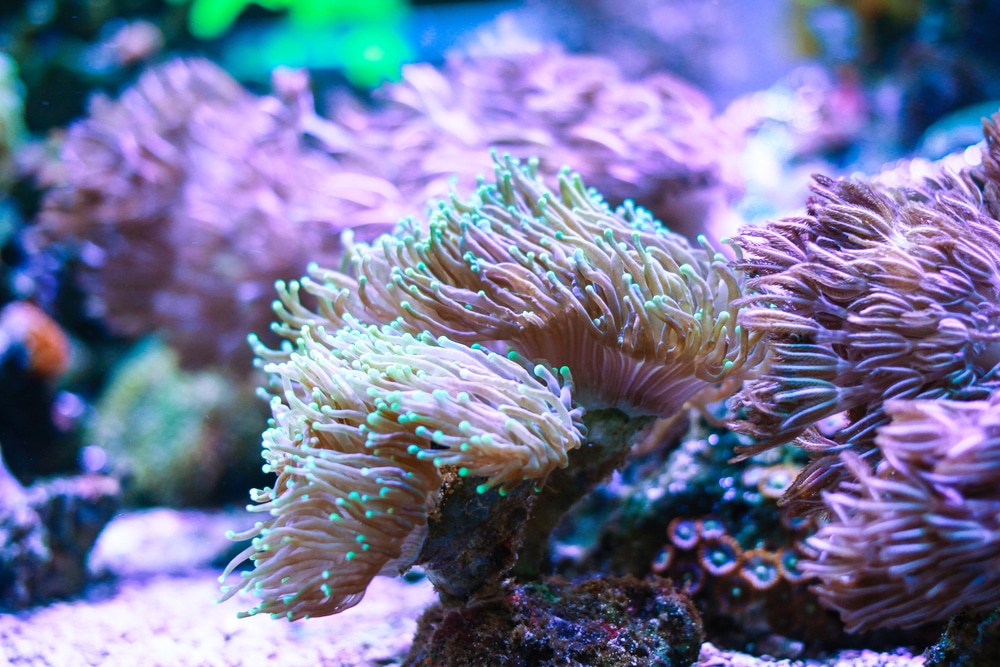 Stony coral keeping is the pinnacle of the saltwater experience. So much goes into these tanks in terms of lighting, chemistry, aquascaping, and general knowledge that they can scare off even intermediate aquarists from giving them a chance.

That said, if you’re ready to take the plunge, there are a number of corals that are fairly durable and worth a shot. Torch Corals are a great stony coral to start out with and very different in appearance from the rest.

What are Torch Corals?

Torch Corals belong to the genus Euphyllia, which includes their close relatives the Hammer Coral (Euphyllia ancora) and Frogspawn Coral (Euphyllia divisa). All three are highly desirable in the trade due to their fleshy appearance and active nature. While they are hard corals they show quite a bit of motion and are more like sea anemones in appearance.

Torch Corals are known as Large Polyp Stony (LPS) corals. This means they consist of a large, fleshy mass that’s attached to a hard, stony base. The coral secretes minerals containing calcium, carbonates, and other elements slowly but continually, enlarging its platform as it grows.

Like most LPS Torch Corals need near-pristine water quality with very low dissolved nutrient concentrations. They are also a bit challenging because they are one of the more aggressive corals in the hobby and will actively attack any coral that sits too close to it!

But they offer a look that’s very unique; Torch Corals look very similar to sea anemones only without the wandering habit that many of them have. They can also feed like anemones but also can live entirely from their zooxanthellae. Let’s talk about how to care for these intriguing but challenging corals.

For marine aquarists in general, stony corals are on the difficult side. That said, for a LPS Torch Coral is on the easier side, assuming you have the basics down pat!

Torch Corals aren’t too concerned about the size of an aquarium. Small frags can grow up even in nano reefs of 5-10 gallons. As the coral grows though, you’ll want to give it at least six inches of space beyond the reach of its feeding tentacles.

Torch Corals are on the aggressive side and will attack their neighbors at night with long sweeper tentacles that give them around 6 inches of added reach. Therefore, a spacious tank 30 gallons or larger in size will ensure you have enough room for other corals to grow out.

Torch Corals are a little more tolerant of nutrient-rich water than other stony corals but should still be kept in as clean a condition as you can manage. Nitrates should be below 10ppm and ammonia and nitrite should be near or at 0ppm at all times.

Nitrate can be tricky with LPS because zero nitrates will actually stunt the growth of many species. But higher nitrate levels (20+ppm) can stunt growth or even lead to polyp bailout – the coral detaches from its stony base and wanders off, usually to die.

It’s best to aim for close to 0ppm but not to stress too much since it’s hard to actually achieve that. Especially if you have fish and other organisms that give off nitrogenous waste that decays into nitrate anyway.

As a stony coral, it does crave calcium to fuel the growth of its aragonite skeleton. 400-450ppm of calcium will ensure your Torch Coral grows steadily. If your Torch Coral doesn’t seem to be thriving, calcium levels are one of the first things you want to check, along with strontium, magnesium, and other trace elements.

Torch Corals also enjoy some degree of water flow. They don’t need or want to be blasted with too much direct current. But a gentle to moderate flow using a powerhead or filter outflow helps them shed mucus, debris, and aids them in finding food.

Torch Corals are medium to high light LPS because they live almost entirely off of their photosynthetic zooxanthellae (symbiotic algae). Like plants, most corals require light to create sugars to survive and without it they wither and die.

Your lighting should be at 75-150 PAR in intensity. Torch Corals will react differently to changing light intensity. Often the coral will extend its tentacles out further in low lighting or shrink back if it gets too intense.

Their colors are typically more intense under high lighting as well. You can use these cues to find the right light strength for your particular Torch Coral.

While Torch Corals can live solely off of their zooxanthellae they have those long feeding tentacles for a reason. Torch Corals are active eaters as well and one of the hungrier corals out there. Each tentacle has a light colored bulb packed with nematocysts that disable any small animal that brushes up against it.

The nematocysts also act as microscopic harpoons, sticking to the skin of the target until the coral can latch on with more tentacles and drag the food towards its mouth.

Feeding Torch Corals is easy to do; any small, meaty food is appreciated and will spur more rapid growth. Thawed brine shrimp, krill, or mysis shrimp are by far the most convenient and inexpensive options out there. Simply mix the frozen shrimp in a bit of warm saltwater and wait for it to melt.

Then, turn off the current directed over the coral and spot feed the Torch Coral by releasing bits of shrimp on its tentacles. You can use a set of coral feeding syringes to ensure excess food doesn’t spread throughout the water column. 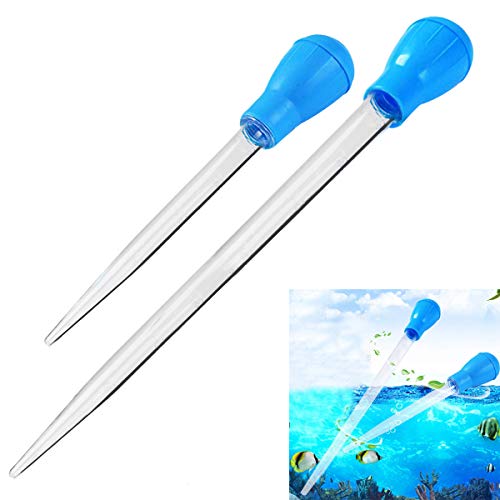 Feeding 2-3 times per week will result in more tentacle extension and thicker body tissue. But if you’re more concerned with optimal water quality and ease of care you can skip the feedings and allow the coral to live entirely off of photosynthesis.

Torch Corals need a lot of thought put into tank mates, specifically other corals, because they are on the aggressive side. For aquarists unfamiliar with reef keeping, using the word “aggressive” to describe a passive animal like a coral sounds strange.

But corals actually engage in several kinds of active warfare with one another to secure valuable real estate on the reef. Torch Corals have what’s called sweeper tentacles that are used specifically in coral warfare instead of feeding.

Torch Coral sweeper tentacles can be quite long, often extending 6 inches beyond the regular feeding tentacles. Sweeper tentacles are usually sent out at night so you may not even be aware that they exist.

Often the lights will simply come on one morning and you’ll see a mysteriously damaged and dying coral that seemed far enough away from the aggressive Torch Coral.

So choose corals that don’t wander too much and have shorter tentacles that won’t come into contact with the sweeper tentacles of the Torch.

Torch Corals can be kept with one another and won’t harm each other. The closely related Frogspawn and Hammer Corals will grow side by side but Torch Corals will still attack them.

You also need to choose your animals carefully. Clownfish are often willing to host Torch Corals but they are sometimes too active for a smaller coral and can literally love it to death through constant irritation. Medium to large Torch Corals should have no problems with even a pair of Clownfish.

Avoid coral grazers and predators whenever possible. This includes most larger Angelfish, Wrasses, Butterflyfish, and Parrotfish.

Many of the Pygmy Angelfish of the genus Centropyge can work well in a reef aquarium with a bit of planning. None are truly reef-safe as they spend all of their time grazing and may pick at coral polyps.

But if given plenty of food and there is additional algae to eat, Flame, Potter’s, and Cherub Angels can all live alongside corals. Swallowtail Angelfish (Genicanthus sp.) are a little larger. But every species in the group eats only plankton and are entirely reef-safe.

Other reef safe fish include the Mandarin Goby, Tangs & Surgeonfish, Hawkfish, Firefish, and Blennies. Most invertebrates will also work well with corals, including Starfish, Shrimp, Sponges, and anemones.

Be mindful of where you place anemones as many species have a tendency to wander in search of better lighting or currents. They may end up stinging or being stung by the Torch Coral if they get too close.

Propagating Torch Corals is easily done and allows you to spread the clones to other parts of the aquarium or give them to fellow coral keepers. Torch, Hammer, and Frogspawn Corals have two types of growth that they display: branching growth and wall growth.

If they take the branching aspect you’ll see the Torch Coral form a stony base with the look of a deer antler. It will form a multi-headed colony that needs to be treated differently from a wall colony.

To propagate a branching colony, you can use either a bandsaw or bone cutters to clip through the hard skeleton. Once you remove the Torch Coral from the water the coral should retract from it enough that you won’t need to disinfect any wounds created by cutting.

Once you’ve split the colony into several pieces you can glue the new frags onto frag disks for regeneration and placement into a new home.

Wall growth is a single large plate that can instead be split using a bandsaw. Since significant damage will be done to the fleshy parts, you’ll need to prepare a saltwater iodine bath in advance to prevent infection from taking hold.

Still, like many simple animals, Torch Coral recover quickly from what would be fatal surgery for a vertebrate. You now have two (or more) identical clones of the original Torch Coral that can now be allowed to grow larger.

Your Torch Corals may also attempt to breed without your help. They can reproduce either sexually or asexually. To clone themselves the Torch Coral will bud off a piece of its flesh on its own.

This piece will typically be swept away by the current a short distance, only to find a hard surface to attach to and begin building a new skeletal structure.

They can also reproduce sexually. Many reef corals use a combination of the tides and lunar light cycles to synchronize their breeding. All at once over the course of just a few days these corals will release massive clouds of eggs and sperm into the ocean.

These gametes mix, fertilizing and developing into planula (larvae) that waft among ocean plankton for weeks before settling back onto the reef. Eventually, these larvae build brand new Torch Coral colonies and help make the reef just a bit bigger!

Sexual reproduction is extremely unlikely to occur because it relies on there being several Torch Corals as well as tidal and lunar cues they aren’t getting in your aquarium. But very rarely, Torch Corals may breed anyway, catching the aquarist entirely by surprise!