If you’re considering keeping a reef tank for the first time, you’re likely intimidated by all of the stories you’ve heard about the difficulty and sensitivity of stony corals. One mistake and they’re all going to die..Right?

As it turns out, there are plenty of LPS (large polyp stony) and SPS (small polyp stony) corals that are very forgiving of your first attempts at keeping them. And Frogspawn Corals are famous for being one of the best species to begin your reef journey with!

However, even advanced reef keepers enjoy them for their beauty, hardiness, and affordability. They are also easy to frag and loved (perhaps too much) by Clownfish. If you’re interested in these intriguing stony corals then keep reading to find out more!

Getting to Know Frogspawn Coral

Frogspawn Coral is popular due to its intriguing, even elegant appearance. Like many of the Euphyllia genus (along with Hammer corals & Torch corals), Frogspawn have a full bodied look with gently waving tentacles that remind viewers of a Sea Anemone.

Except as true LPS corals, the Euphyllia aren’t going to crawl around the tank stinging their neighbors. They have a stony, calcareous base that keeps the glued in place. Over time, they secrete additional calcium carbonate extracted from the water to provide additional living space for themselves.

Frogspawn Corals do tend to get along with other Euphyllia. But they are capable of showing some aggression to nearby corals, which we will discuss below. Torch and Hammer Coral look very similar to Frogspawn. However you can tell them apart by the tentacle tips; Frogspawn Coral have several tips on each tentacle, unlike the other two species.

Frogspawn Corals are named for their appearance. If you’ve ever seen a jelly-like mass of frog or salamander eggs, you’ll see that the comparison is quite apt. Frog eggs are ropy, gelatinous, and have a highly visible embryo in the middle. Green-tipped and purple tipped tentacles are the most common. However, variants with blue, orange, and other hues are around (and typically much more expensive)!

Found all across the Pacific Ocean, these stony corals are excellent first corals for beginners due to their undemanding light and nutrition needs. Frogspawn Corals do need to be fed but not often and they actually prefer moderate light levels. Current is important to them, however.

These corals are capable of growing into wall or branching structures. Branching Frogspawn Corals are much more common; the coral grows into several heads that can be easily propagated into separate heads, if you wish. A wall Frogspawn Coral is a single large polyp that continues to expand. For dramatic impact, there’s no substitute for a mature wall Frogspawn Coral!

If you’re interested in these anemone-like corals, let’s delve into the fine details of Frogspawn care!

While on the aggressive side, Frogspawn Corals are hardy and an excellent beginner LPS Coral. Just be careful with where you place them and provide adequate current and lighting for them!

Frogspawn Corals are fairly forgiving when it comes to water parameters. Like all hard corals, you do need to provide them with enough minerals and elements to fuel their growth. And they need stability over time to maintain their health. The ocean, and especially the coral reef, is a highly stable environment. Being near the equator, temperature fluctuations are minor and water chemistry tends to shift over the course of millions of years (which is why climate change is so devastating to coral reefs today).

Next to sodium and chloride, magnesium is the most abundant element in seawater. We want to see levels around 1200-1350 ppm. But not because Frogspawn Coral uptakes all of it; magnesium actually moderates water chemistry, allowing calcium and carbonate levels to sit as high as they do in reef aquariums.

We want levels of 350-450 ppm of Calcium and an alkalinity of 0-12 DKH for proper growth. The alkalinity levels recommended are actually slightly higher than typical marine conditions. But these ideal conditions boost coral growth rates somewhat. 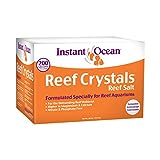 Other essential elements include strontium, which is taken up in small amounts as a skeletal structural component. Most micronutrients are found in any standard marine saltwater blend. But for coral reef tanks, you should be using a fortified reef salt for good growth.

Nitrate should be slightly measurable as all corals need a source of nitrogen to feed their zooxanthellae; their symbiotic algae. These algae form a symbiotic relationship with the coral; in exchange for lighting and nutrients the algae share their sugars with their host.

Frogspawn Coral depends a fair amount of their zooxanthellae so we want to make sure they have enough light and algae food to photosynthesize properly. You don’t need to dose nitrate unless you have no fish, shrimp, and other organisms. Otherwise, the ammonia they produce will be converted through the nitrogen cycle into nitrate thanks to your mature biological filtration system!

Water flow is also very important to Frogspawn Coral health. They enjoy moderate and even high flow at times. If you want to see them reach full extension, moderate flow and lighting will ensure they put on a show.

A Frogspawn Coral may double in size with just the right levels of current. Stronger currents will encourage them to take a more compact shape, which may better fit your aquascape. But be careful not to stress the coral with too much flow.

Considering their brilliant colors, you can be forgiven for thinking these are a light loving species of coral. Frogspawn actually prefer low to moderate lighting conditions; 50-100 PAR is plenty for them to thrive. Higher light levels may bring out a bit more color. But typically a Frogspawn Coral doesn’t shift in color much in response to light conditions. Too much light intensity can also cause them to retract into themselves from stress.

Tank mates for Frogspawn Coral can be something of a sticking point because this is a more aggressive species. For a beginning reef keeper, the notion of “coral aggression” likely sounds strange. After all, corals don’t move! How can they attack one another?

The reef environment is as competitive as any jungle. Living space, currents, nutrients, and light are at a premium and corals have a number of ways to increase the amount of these important factors they take in.

Frogspawn Corals (and Euphyllia in general) have long sweeper tentacles that complement their normal reach. Typically they extrude these specialized tentacles at night, hoping to snare tiny fish, shrimp, and other prey.

Sweeper tentacles have a bulb on the end packed with nematocysts (stinging cells). These are used to paralyze prey – or attack neighboring corals that they come into contact with. Sweeper tentacles can reach up to 6 inches beyond the coral itself. You might think a neighboring coral is safe from your Frogspawn only to find it starting to wither and die a few days later. And since the sweeper tentacles aren’t out during the day, it appears quite mysterious if you’re unaware of their reach.

Therefore, you need to be very intentional about how you place a Frogspawn Coral. If you place other corals upstream from them, the moderate currents they favor may protect a more sensitive coral from their reach. Most Euphyllia will tolerate one another, however, meaning you can have a Frogspawn, Hammer, and Torch Coral touching each other. Usually; Torch Corals (Euphyllia glabrescens) are known to be temperamental so you’ll need to keep a close eye on it in case it decides not to share its space.

Frogspawn Corals are good tank mates for wanderers like Sea Anemones, Mushroom Corals, and Ricordea Corals. While these corallimorphs and related cnidarians like to wander and can occasionally abuse more peaceful corals, they will learn to give the Frogspawn its space when the sweepers are out.

Clownfish will also host Frogspawn Corals occasionally. Wild caught Clownfish are more likely to try; captive bred Clownfish may not bother with a Frogspawn Coral (or even a sea anemone). Just keep a close eye on the pairing because an especially happy Clownfish will burrow into the coral continually, which may cause tissue irritation and cause it to retract in on itself. Eventually, the Frogspawn Coral should grow accustomed to the attention but not always.

Other good tank mates for Frogspawn Coral include any reef-safe fish or invertebrate. Stay away from Butterflyfish, Angelfish, Peppermint Shrimp, and other animals known to pluck at corals.

Frogspawn Corals can be fed but they aren’t the most aggressive of eaters. Once a week is going to be enough for them and they may even reject food at times. Frogspawn get more nutrition from their zooxanthellae than many other LPS species and can even live without food being provided. 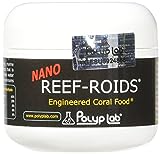 Offering them occasional food in the form of coral pellets, amino acid blends, brine shrimp, or mysis shrimp can work if you want to boost their growth rate. However they do absorb organic matter from the water column constantly. Fish and other tank mates provide a ready source of nutrition for them.

Target feedings are best for this less than enthusiastic eater since leftover food from broadcast feedings will contribute to poor water quality. But if you have several corals in close proximity a good broadcast feeding will ensure the Frogspawn gets at least a small amount.

Coral propagation is an important part of the reef keeping hobby because sexual reproduction of corals is next to impossible in aquariums. In the wild, corals rely on the tides and the phases of the moon to coordinate mass spawnings. After all, they can’t really go out and find a mate.

Frogspawn Corals do have distinct male and female sexes. But it’s much easier to rely on their asexual reproduction abilities in the home aquarium. The main ways they reproduce are through budding and fragging.

This video goes into more detail on the different structural forms and propagation methods used by Frogspawn Corals. Once they become established in your tank they will start to grow small polyps along their base that eventually drop off and form entirely new colonies. These pedal buds take a few months to grow and drop off but over time you’ll likely gain several new Frogspawn Corals with no work whatsoever on your part!

But if you have a reluctant budder or an especially rare variety you want to quickly propagate, you can also frag the coral yourself. Frogspawn Corals are fairly easy to frag, assuming you have a branching growth form to work with. The wall variety is extremely rare to begin with but are also slower growing and have a harder time healing from the process. 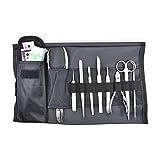 To frag a coral, you will need a good fragging kit with sterile, extremely sharp metal tools. A coral with a branching growth form will form several heads that can be separated, glued to a fragging disk, and then allowed to grow into a new Frogspawn Coral colony!

You’ll want to keep an iodine bath nearby in case the flesh gets cut to prevent infections. However any injuries will heal very quickly and the new Frogspawn Coral colonies can be allowed to grow larger or given to friends right away!