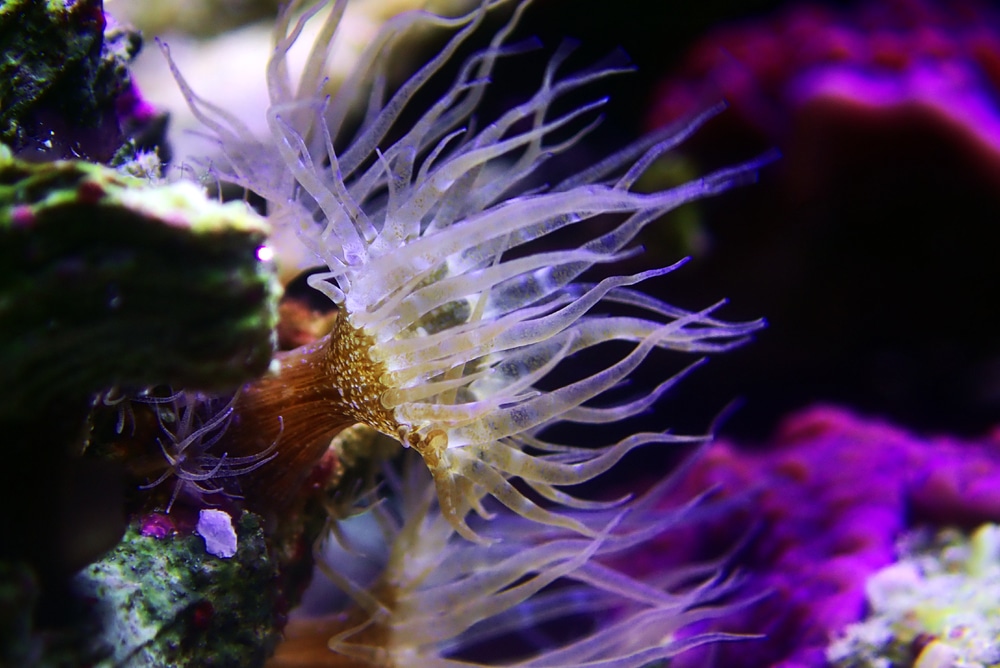 Sea Anemones are some of the most recognizable and desirable organisms for saltwater aquariums. With their delicate tentacles and often vibrant color, they offer a flower-like alternative to hard corals and active fish.

Some species are somewhat hardy and others are delicate. However there is one particular species that is so easy to keep that it quickly grows into pest proportions – Aiptasia.

In this guide we teach you how to identify and eliminate Aiptasia from your saltwater aquarium.

What are Aiptasia & Why are they a Problem?

Aiptasia is a genus of tiny Sea Anemones distributed worldwide. They are closely related to some more desirable species, like the Curlique Anemone (Bartholomea annulata) but are far smaller than most types found in pet stores.

Aiptasia rarely grow more than two inches in height and ¾ of an inch in diameter. While a tiny, easy to keep Sea Anemone sounds like a fascinating pet for a beginner, Aiptasia have a dark side.

Despite being tiny, Aiptasia have a vicious sting. While human skin is too thick to be penetrated Aiptasia are indiscriminate, stinging anything that swims or sits nearby. They can easily irritate aquarium fish and even kill young fish and smaller shrimp.

Aiptasia will also sting nearby coral, irritating and eventually killing nearby polyps. Even if an animal cared to try eating one, Aiptasia have defensive stinging Acontia, tentacle-like protrusions that can be ejected along the main body column if molested.

If it were as simple as finding and removing them, AIptasia wouldn’t be such a big deal. However the second part of the problem is their insane reproductive potential. Aiptasia can reproduce in almost every way an animal can.

And worst of all, if macerated or broken up, the chunks of anemone can all regenerate into new Aiptasia clones! Many an unsuspecting aquarist has crushed or carelessly plucked an Aiptasia only to find several more in its place.

Typically aquarists get an Aiptasia colony growing from new uncured Live Rock or coral frag purchases. Being small and translucent it’s easy to overlook or misidentify them until it’s too late.

If you’re a more experienced coral or anemone-keeper, you’re probably wondering about Aiptasia and light. Like many other anemones they do have symbiotic algae (zooxanthellae) that rely on light to provide sugars for sustenance.

However Aiptasia are eager eaters of floating food particles and small organisms and aren’t reliant on their zooxanthellae for survival. Unfortunately, low-light isn’t an effective control tactic.

Once you have identified an Aiptasia infestation you need to resist the urge to pluck or scrape them away! Each time you do, you’ll undoubtedly leave fragments of flesh that will simply regenerate into new anemones. Instead, try some of the following control methods!

Sometimes the best control for a problem organism is introducing predators to keep their numbers down or even eliminate them. Here are some of the best aiptasia-eating sea creatures!

There is a staggering variety of saltwater shrimp in the aquarium trade! However many are not only beautiful but extremely handy members of a saltwater cleanup crew! When it comes to finding and eating Aiptasia, Peppermint Shrimp should be your first choice. Buy a few as they tend to occasionally graze rather than eat to eliminate them.

They will even act as cleaner shrimp on occasion, picking off dead skin and parasites from willing aquarium fish! Peppermint Shrimp prefer a bit of variety in their diet and will also consume most frozen and prepared foods.

Camel Shrimp (Rhynchocinetes durbanensis) are a Pacific look-alike that also eats Aiptasia. But unfortunately, they aren’t considered reef-safe because they readily pick at corals and anemones as well.

Filefish are of the order Tetraodontiformes, making them near cousins to Triggerfish and Pufferfish. And like these toothy creatures Filefish love munching mostly on invertebrates.

Filefish are perfect for aquariums where the other inhabitants might see Peppermint Shrimp as a tasty snack. The Bristletail Filefish is small for it’s kind, rarely exceeding 3 inches. They have a chameleon-like ability to drastically alter their color to blend into the surroundings.

Although territorial towards their own kind, Bristletail Filefish are peaceful and even shy around other fish. They are even reef-safe, though with caution.

Most aquarists report they leave desirable species unmolested but being anemone-eating Filefish, I’d be wary and watchful when introducing one to a reef tank.

There are other fish that will at least sample Aiptasia, if not eliminate them as thoroughly. The only fish that can compete with the Bristletail Filefish for effectiveness is the Copperband Butterflyfish (Chelmon rostratus).

They are some of the most iconic marine fish; medium sized (up to 8 inches) and with a prominent mouth designed to graze on small organisms hidden in live rock, like Aiptasia. The only problem is that they are large, fairly expensive, and highly sensitive in terms of diet, water quality, and tank mates.

Copperband Butterflyfish are shy, retiring fish that stress easily, making them an option only for advanced aquarists. They are also not reef-safe as they will gladly dine on more desirable corals and invertebrates. Unfortunately, since they are exclusively wild-caught, once your Aiptasia infestation is eliminated they may eventually starve.

Of all the choices this is one that specializes in eating exclusively Aiptasia! The Berghia Nudibranch is a small sea slug found in Caribbean waters with a fascinating feeding strategy.

By consuming Aiptasia the Nudibranchs absorb and employ both their stinging nematocysts and their photosynthetic zooxanthellae. In short, they steal the ability to sting predators and photosynthesize, though only for about a week.

They are both small and nocturnal so long periods of darkness and several slugs are needed to eliminate an Aiptasia infestation. Most breeders of Berghia recommend 8-10 Nudibranchs per 100 gallons and only keep them in tanks with moderate to heavy infestations.

However be aware that the slugs will starve if they run out of Aiptasia. When that happens consider rehoming them to another aquarist with the same issue!

If you don’t want to introduce Aiptasia-eating creatures into your tank, here are a few other options.

The best cure for Aiptasia is prevention. By carefully inspecting or better still, quarantining all incoming coral and live rock, you can greatly reduce the chances of unwanted hitchhikers causing problems in your main aquarium. Live rock quarantine also helps you hunt down Brittle Starfish, Bristleworms, Vermetid Snails, and other reef pests.

Typically wild-harvested corals and rock that are fresh from nature are the least likely to carry Aiptasia. They tend to thrive in holding tanks where there is plenty of both waiting and turnover, such as in the distribution tanks of saltwater wholesalers.

Many aquarists also prefer dry starting live rock – using rocks that don’t have any attached life. These “dry” rocks are inexpensive and can easily be seeded with the marine species of your choice.

The main downside is that you won’t get the species diversity and occasional positive surprises that come from pre-colonized rocks. But at least you won’t have problem hitchhikers to deal with and can account for every organism in your aquarium.

Red Sea Aiptasia-X is a highly rated, very effective product designed specifically to kill Aiptasia anemones without harming your other marine life. Since it congeals in contact with water it can’t waft and cause damage to other corals or anemones the way lemon juice or peroxide can.

Here is a sample video created by Red Sea showing just how effective Aiptasia-X is:

It’s formulated to be palatable to the anemone – when placed near the oral disk, the Aiptasia will simply ingest the formula. But much like chemical ant bait, the “food” is toxic, causing the anemone to literally implode without leaving fragments that can regenerate. 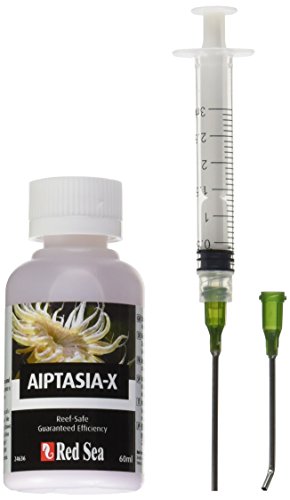 Best of all, unlike other chemical control methods Aiptasia-X won’t impact water chemistry.

The last two agents are some of the easiest to obtain. Both can be found in grocery stores and may even be in your home already! In order to use them you’ll need a 3-5mL syringe with a 0.5mm x 16mm needle.

The process is as simple as can be: merely draw the solution into the syringe and inject at most 0.5mL directly into the body of each adult anemone. Don’t go through the top as it may simply expel the majority of the solution through the oral cavity.

When dealing with baby Aiptasia simply remove the needle and squirt tiny amounts of juice or peroxide directly onto them. Shut down any filtration or powerheads in order to stall water flow and keep the juice around the anemone as long as possible.

If you treat with lemon juice re-test the pH once you’ve finished if you were dealing with a heavy infestation as it is strongly acidic.

Here’s a video of the lemon juice method being used to kill baby Aiptasia!

Aiptasia anemones are a common issue in marine aquariums with lots of new organisms being added, especially when first set up. Typically the infestation starts when the aquarist decides to try and physically remove a single anemone, crushing it and allowing the bits to form new Aiptasia.

Instead, you’ll need to take a smarter approach when dealing with these wily cnidarians! But don’t fret – with a little doing you’ll have them under control in no time!