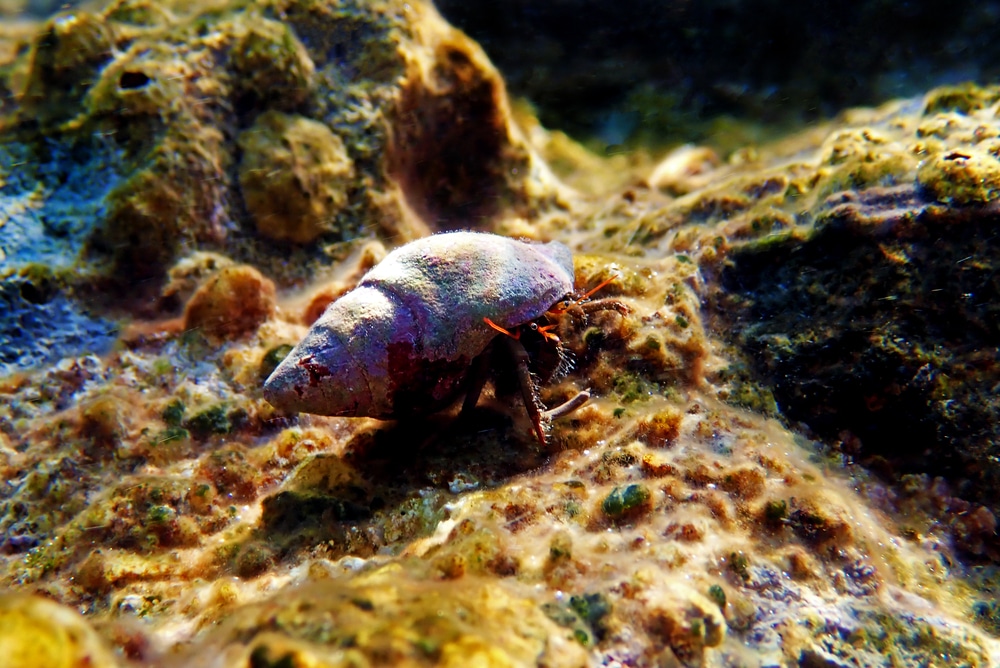 As your marine aquarium matures we all inevitably run into issues related to ecosystem balance. Prolific algae growth, the buildup of detritus and leftover food, and problem invertebrates can wreak havoc in our carefully calibrated ecosystems.

Saltwater clean up crews specialize in maintaining the balance between water changes and scrubbings. By consuming algae, scavenging for hidden flakes, and devouring pests they ensure we only need to take minor actions to keep things in balance!

Your saltwater clean up crew should be tailored to the needs of your aquarium – so let’s get to know the various species available!

Here are some of the species that we recommend adding to you clean up crew:

Algae is the one problem every marine aquarist will run into, and usually repeatedly. Algae grows wherever light and nutrients are abundant. And finding the right algae eaters can be challenging because sometimes they’re quite picky.

Fortunately algae control is one of the most common reasons for assembling a saltwater clean up crew and there are literally hundreds of good options to choose from!

Hermit Crabs are a diverse group. Some are massive and can cause problems in reef aquaria as they knock over decorations and pick at sessile invertebrates. However there are dozens of tiny, reef safe Hermit Crab species that are perfect for any saltwater clean up crew.

While many species tend to be rather drab, several, such as the Scarlet Reef and Halloween Hermit Crab, are attractively colored in their own right.

Hermit Crabs are hardy, inexpensive, and constantly active. They will consume most species of algae except for diatoms. Hermit Crabs prefer coralline, filamentous, hair, and film algae as well as cyanobacteria, which can form purple or red mats on surfaces (red slime algae).

Most premade aquarium clean up crew will contain one or more of the below species plus a few other assorted types. Hermit Crabs work tirelessly to find food and are insatiable eaters.

Some species will attack snails as they grow to obtain new shells so be careful when keeping them with smaller snails.

Blennies are a diverse group of small bottom dwelling fish. While some are carnivores and others clever tricksters that mimic cleaner fish, many are hard working grazers and great additions to most marine aquariums.

Many Blennies graze on rocks and other hard surfaces for filamentous macroalgae, detritus, and small invertebrates like worms and copepods. While not entirely vegetarian they should still be kept in aquariums with healthy algae populations.

If the algae runs low Blennies should be given supplemental feedings of algae based prepared foods. Spirulina based products are common but Omega One makes a fantastic blend made from 100% marine macroalgae that’s perfect for not only Blennies but Tangs and other marine vegetarian fish!

There are too many species of marine snails available to count and the majority are excellent detritivores. Many are commonly added to saltwater clean up crews for algae control, including Turbo, Trochus, Cerithium, and Margarita Snails. They feed on nearly every type save coralline algae and even if a particular Snail ignores one type of algae mixing species will result in complete algae control.

Snails offer benefits beyond algae and detritus control. Many, such as the small Bumblebee (Engina sp) and large Fighting Conch (Strombus alatus) burrow through sandy substrates. This turns over the bottom, increasing aeration and improving substrate health for other invertebrates and microorganisms.

Bumblebee Snails are also effective at controlling both small bristle worms and pest Vermetid Snail populations. In short, Snails deserve a place in every saltwater clean up crew!

Detritus is a general term for the particulate accumulation of decaying organic matter that builds up in any aquarium or natural ecosystem. It comes from fish waste, leftover food, decayed corpses, dead plants, and other sources.

While most animals don’t find detritus very appetizing most saltwater clean up crews are organized around tackling this abundant substance. Regular water changes help ensure your tank stays detritus-free but it inevitably builds up in porous rock cavities, deep substrate pockets, and other hard to reach places.

While the following animals are mostly kept as detritivores and scavengers It’s worth mentioning that all of the animals in this article are also great at hunting down leftover food and detritus!

Starfish are generally known to be some of the slowest animals in the ocean. Brittle and Serpent Starfish are an exception – while they are generally nocturnal they can move rather swiftly when food is involved!

While a few, such as the giant Green Brittle Starfish (Ophiarachna incrassata), are large predators that should not be kept with small fish and invertebrates, the majority are inoffensive detritivores. They wait until the aquarium lights go out and then hunt for leftover food and other treats among rocks and sand.

Brittle and Serpent Starfish are occasionally found as hitchhikers on live rock but are rarely problematic in marine aquariums. Several are even colorful and well worth buying for their beauty as well as their scavenging tendencies.

Unlike Starfish Brittle and Serpent Stars tend to be very tolerant of a wide range of water conditions and very beginner-friendly additions to your saltwater clean up crew!

Saltwater Shrimp come in a dazzling array of color forms and habits. Some, such as the popular Blood Red Fire Shrimp (Lysmata debelius) are shy and nocturnal while others like the Banded Coral Shrimp (Stenopus hispidus) are bold, showy, and occasionally a bit aggressive.

Nearly all are excellent detritivores, constantly on the hunt for leftover and decayed food, dead or dying organisms, and other tidbits that escape the attention of fish and larger invertebrates.

Most Shrimp are territorial to a degree with one another but are peaceful towards anything they can’t overpower and consume. The majority are also reef-safe additions to your saltwater clean up crew.

While Shrimp are rarely kept for pest control several, including many Lysmata species, exhibit cleaner behavior. Waving their white antennae and perching on coral and rocky outcroppings, they attract nearby fish.

And instead of getting eaten the fish pause while the Cleaner Shrimp busily picks at loose scales and parasitic growths on skin, fins, and even in the mouth and gill arches or large predators!

Asterina Starfish are a nuisance invertebrate that often comes along with new live rock purchased Asterina can reproduce dizzyingly fast and are hard to eradicate. Fortunately, Harlequin Shrimp (Hymenocera elegans) specialize in eating Starfish and can make short work of an infestation!

Aquariums nurture all sorts of living organisms but sometimes carry more than you bargained for. Pest anemones, worms, and other invertebrates can cause significant problems for your favorite inhabitants. Fortunately, many saltwater clean up crew members specialize in dealing with them!

Although many of its cousins in the Lysmata genus are known for being effective cleaners of parasites on fish, Peppermint Shrimp don’t display this behavior as frequently as Blood Red Fire or Scarlet Skunk Cleaner Shrimp.

Instead they are mostly detritivores, content with leftover food but actively snatching bits of prepared and frozen morsels whenever possible.

Peppermint Shrimp are unusual for marine shrimp in that they are entirely peaceful towards each other as well as other shrimp species. Given their small size groups of 6 or more make an excellent addition to your saltwater clean up crew!

Peppermint Shrimp have a secondary benefit: they relish Aiptasia anemones. Aiptasia are a problem most reef aquarists run into at one time or another because the tiny anemones can hitch rides unnoticed on pieces of live rock or coral.

While tiny, Aiptasia have a vicious sting that irritates corals and can kill small fish and invertebrates. They breed swiftly and asexually – a single anemone will become several in just a week.

Even crushing or removing them with tools will leave remnants that can regenerate into new Aiptasia. However Peppermint Shrimp pluck them from surfaces and eat them with gusto!

Be careful not to confuse Peppermint Shrimp with the similar looking Camel Shrimp (Rhynchocinetes durbanensis). Found in the Pacific Ocean, they are just as beautiful but have no taste for Aiptasia.

Distinctive and fascinating to watch as they move robot-like across reefscapes, Arrow Crabs are a welcome addition to many reef aquarium clean up crews.

They will eat anything meaty and hunt constantly for leftover food and detritus that builds up in rock crevices. Their long thin limbs give them reach other detritivores can’t match.

Arrow Crabs are also very fond of marine worms, including bristle worms. Bristle worms are effective scavengers in their own right and are useful detritivores in the right setup. However their defensive bristles can irritate nearby anemones and soft corals.

Fish taking an exploratory bite may end up with a face full of bristles and aquarists moving rocks bare-handed can also be stung. A few, such as the giant bristle worm, are predators, and have powerful jaws to take chunks out of snails, corals, and other worms!

Some, such as the bearded fireworm (Hermodicecarunculata) are actually venomous. However most bristle and fire worms are irritating to get stung by but not dangerous.

While most bristle worms are inoffensive, they can also become numerous if there’s plenty of detritus to eat. Therefore, many aquarists prefer to control or eliminate them with predatory fish or Arrow Crabs.

Like all crabs they are opportunistic hunters. Anything small and slow will be overpowered and eaten so avoid keeping Arrow Crabs with tiny or sickly fish and invertebrates.

While they are considered reef safe Arrow Crabs will occasionally pick at coral polyps if not well fed and will eat feather duster worms so choose their tankmates carefully.

As you can see, there really is a clean up crew member for nearly every problem! Most are reef safe and all do well with appropriately sized fish and invertebrates. In my opinion, every mature aquarium should be home to a saltwater clean up crew and hopefully you have a bit more guidance on how to put one together!