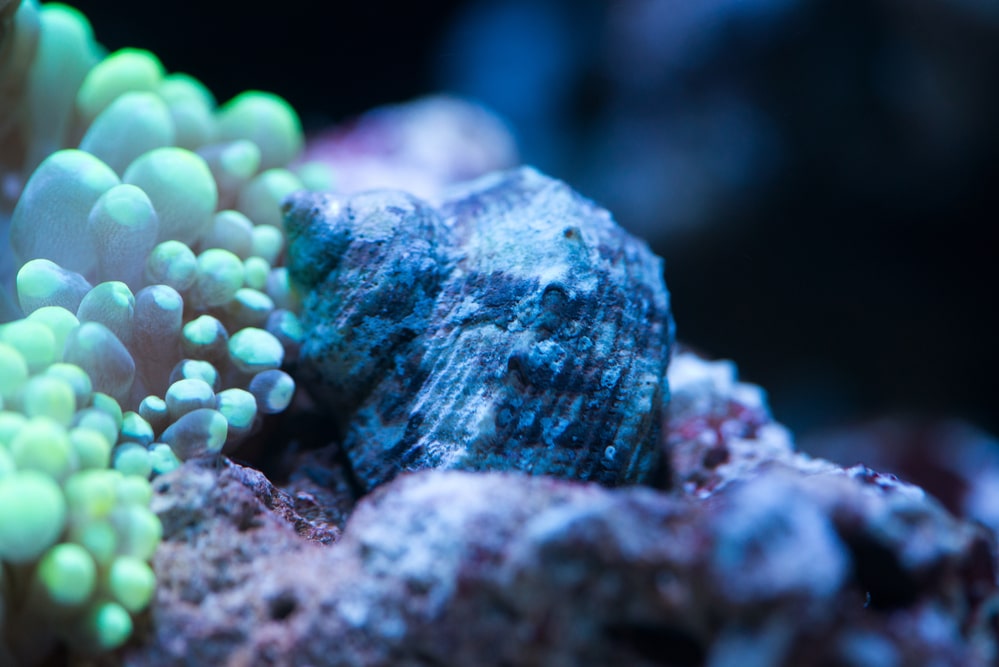 Snails have a place in both reef and fish-only tanks as detritivores and algae eaters. Inexpensive and interesting to watch, there is a snail for every aquarium!

Here are some common types of saltwater snails, both good and not so good.

10 Types of Saltwater Snails that are Reef-Safe

Here are a few types of saltwater snails to keep in your tank:

Unlike most of the snails on this list Bumblebee Snails are a carnivorous type of saltwater snail. They are also quite small, reaching only ½ inch in length when fully grown.

Bumblebee Snails are sand sifters and eagerly burrow throughout the substrate looking for meaty items like leftover food and polychaete worms.

Their constant hunting for decaying food and burrowing helps turn over your substrate and prevents dead spots from forming. Sandy substrates can often harbor anoxic pockets that can outgas deadly Hydrogen Sulfide if left unattended.

While carnivorous Bumblebee Snails are considered reef-safe. However once all of the easy food is consumed they will go after reef polychaetes, some of which are considered beneficial.

They will also hunt down pesky Vermetid Snails, though only when especially hungry. Bumblebee Snails are nocturnal and especially slow, even for snails, and tend to stay in one place until forced to hunt.

Turban Snails are vegetarians that graze constantly on algae growing aquarium glass and live rock. Since they aren’t active burrowers, pairing them with substrate stirring snails is key for a good cleaner crew.

As small, vegetarian snails they are a peaceful type of saltwater snail with an intriguing shell design reminiscent of a sultan’s turban, hence the name. Turban Snails are highly variable in color, ranging from white, brown, and every earth tone in between.

Unlike some other types of saltwater snail Turban Snails will breed readily in captivity if housed in mature aquariums that continually grow algae to graze. They release eggs and sperm directly into the water column, often clouding the water for a brief period.

The young eventually sink to the bottom, feeding on biofilm and algae until large enough to be visible. Turban Snails will also happily accept supplements of blanched vegetables and seaweed should they eat all of the algae within an aquarium.

Cerith Snails are common hitchhikers on newly purchased live rock and are welcome in most reef aquariums. As tiny as they are, rarely growing more than an inch long, they can pursue algae, biofilms, and detritus within the smallest rocky crevices. They will even eat cyanobacteria and other more noxious growths.

Cerith Snails are also consummate burrowers and will tunnel through fine substrate, helping to keep your sand aerated and free of pockets of rotting gas and leftover food. A deep sand bed greater than 2 inches creates plenty of Cerith Snail habitat and they can be kept with other burrowing vegetarian snails without issues.

Occasionally Cerith Snails will breed in established aquariums, leaving long gelatinous strings of eggs. However these eggs are highly visible and tend to be consumed by tank mates long before developing.

The Donkey’s Ear Abalone is one of the few species common in the aquarium trade. Most abalone not only grow up to a foot long but also prefer the colder waters of the Eastern Pacific Ocean.

While small for an abalone, Donkey’s Ear Abalone are one of the larger types of saltwater snails and can easily knock over loose decorations and disturb corals and other sessile invertebrates as they search for food. Abalone are especially fond of diatoms, the soft brown growth that mysteriously coats everything when water conditions rapidly shift. They will also eat any seaweed, detritus, and algae they come across.

When on the move a frilly mantle covers their shell similar to Cowrie Snails that retracts when threatened. While mostly nocturnal Abalone will willingly come out into the open to feed when they smell food. Vegetables or seaweed, including human food like nori, clipped to a nearby rock will attract them.

Conch Snails are impressively large types of saltwater snails, however Fighting Conchs remain small and easy to manage. During the day they tend to sit either on top of the substrate or bury themselves, sometimes disappearing for weeks at a time. At night they prowl about, searching for plants, diatoms, detritus, leftover fish food, and algae to consume under the safety of darkness.

Fighting Conchs get their name from the wrestling matches male snails occasionally perform. However they are peaceful when kept with other types of saltwater snails. Conch Snails in general are popular due to the shapes of their shells – larger species are used in forming conch trumpets.

Fighting Conch Snails should be kept away from medium to large Hermit Crabs. Due to the size of their shells Conch Snails provide perfect homes and may be attacked by Hermit Crabs seeking to move.

Cowrie Snails are usually reef safe but can be problematic. Some species grow as long as 5 inches and will knock over loose decorations as they prowl. While Money Cowries are vegetarian many species will taste corals on occasion, especially if they have eaten all of the available algae.

Money Cowries are also a smaller type of saltwater snail. They can reach up to 1½ inches but are usually smaller. Money Cowries were one of the most commonly used mediums of exchange for centuries. From North America to China people used Money Cowries to pay taxes, buy cattle, slaves, and even assess national income.

While no longer accepted as legal tender Money Cowries are still great additions to the reef aquarium and hunt down algae and diatomaceous films with gusto. Like all Cowries they may nibble at corals if starving and should be given vegetables and seaweed if no more algae is present.

Despite being voracious algae eaters Trochus Snail shells are often covered with it due to their slow movement and daytime feeding habits. When not obscured by algae they often show a beautiful maroon striped pattern that contrasts nicely with their jet black bodies and foot. However, several snails are sold as Trochus Snails, many of which are plain in color.

Banded Trochus Snails prefer established tanks and happily graze on algae, diatom and cyanobacteria films, and detritus. However they aren’t too effective on hair algae and other problem species.

Some Snails (such as Turban Snails) have trouble righting themselves if flipped over however Trochus Snails are quite adept at turning right side up. Trochus will also breed in home aquariums, releasing clouds of eggs and sperm that meet in the water column. Eventually the free swimming young settle to the substrate and develop into tireless algae eaters.

Peaceful, small, hardy, and inexpensive, Nerite Snails are some of the most popular types of saltwater snails. During the day Nerite Snails often choose a corner or hole to huddle at as a group. At night they actively prowl around, grazing on diatoms, algae and biofilms, hair algae, cyanobacteria, and other growths and leftover.

Nerite Snails are amphibious and occasional escape artists. By carrying water for breathing under their shells they sometimes end up in sumps and even on the floor when they decide to leave the water. A tight fitting lid is essential for these active snails.

There are several types of Turbo Snail common in the trade, including Mexican (Turbo fluctuosa) and Astraea Turbo Snails (Astraea tecta). While species from cooler Pacific waters are occasionally found in the trade most are collected from the warmer waters of the Gulf of California, along the Mexican coast, and are true tropical species.

Turbo Snails are one of the most common types of saltwater snail for a marine cleanup crew invertebrate package. They are medium sized and voracious feeders of hair algae, diatoms, and detritus.

Once they clean up most or all of the available algae supplementing their diet with blanched vegetables and seaweed is a good idea. And given their size decorations should be well secured to avoid toppling.

Nassarius Snails are small burrowing snails that spend most of their time completely obscured beneath the sand. The only visible portion is their breathing siphon that they leave extended to not only take in oxygen but the scent of “fresh” food.

Being burrowers Nassarius Snails prefer a deep sandy substrate. While you may rarely see them until feeding time they actively burrow, keeping the substrate aerated and free of dead pockets.

Nassarius Snails are scavengers, not algae eaters. Once they smell dead animals they unbury themselves and move as a group towards the source of food. While dead fish should be rare in aquariums they will also accept prepared foods, including frozen meaty items, flakes, and sinking wafers.

Flamingo Tongue Snails are extremely beautiful, with a unique oblong shaped shell and a pink and orange spotted mantle. However they are problematic for reef aquariums because they feed exclusively on gorgonians, sea whips, and other soft corals.

Flamingo Tongue Snails are patterned to blend in with their prey and rarely leave a gorgonian once they’ve found one to their liking. Unfortunately their food is simply too expensive and slow growing to be sustainable, unless you have a very large tank with several appropriate corals.

Even then you’ll need to move the Flamingo Tongue Snail on occasion to prevent it from spending all of its time on a single coral, killing it by overgrazing.

Pyramid Snails are one of the stranger types of saltwater snails. They are parasites of Giant Clams, Starfish, and even larger snails, hitching a ride on their shells between meals. When hungry they attack like mosquitoes, drinking blood and other fluids and weakening their prey over time.

While a few aren’t a threat to a health Giant Clam or larger Snail, Pyramid Snails can reproduce every few months and will lay eggs directly on their hosts. Eventually they can kill their hosts through overfeeding.

Pyramid Snails should be manually removed when detected before they multiply. Many fish, including Six Lined (Pseudocheilinus hexataenia) and Eight Lined Wrasse and (P. octotaenia) will also consume them.

Vermetid Snails are one of the stranger types of saltwater snails. Rather than carrying their home on their backs they create a twisting tube or tunnel on or through stony corals and live rock. Their burrowing habits are bad enough however they also create a wide mucus web, feeding on detritus that collects near the mouths of their home.

Vermetid Snails are hard to control as they are so well protected by their tunnel-like shells. Breaking apart their tunnels is recommended. Bumblebee Snails will sometimes hunt down Vermetid Snails as will Arrow Crabs but neither are guaranteed to work.

At first Keyhole Limpets seem like an ideal type of saltwater snail for aquariums. They are small, don’t breed quickly, and feed on algae and detritus. In fact they are great additions to non-reef tanks.

However Keyhole Limpets are a threat to SPS (small polyp stony) corals and will graze on their tissues along with their usual vegetables. Limpets come in many types – some are entirely vegetarian while others are omnivorous. If you can’t readily identify a Limpet species it’s better to remove them from reef aquariums to avoid harm to corals.