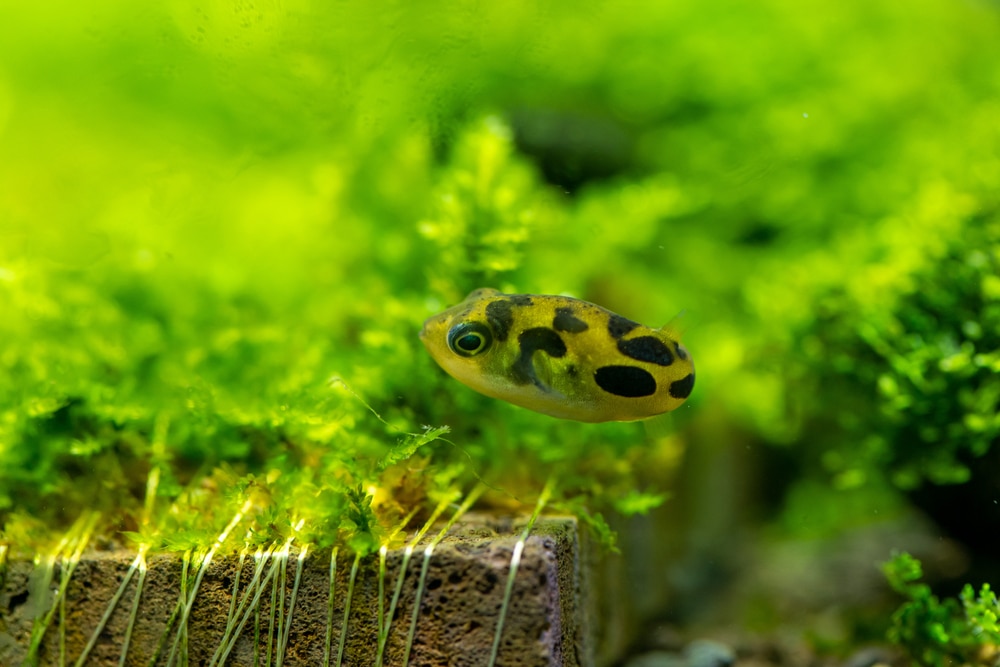 Puffer Fish are infamous for being large, often aggressive fish with a willingness to bite tank mates, hands, and hard shelled prey. But did you know there is a Puffer small enough to be kept in groups in a 5 gallon desktop aquarium?

Pea Puffers are relatively new to the hobby but are more popular than ever! This guide details everything you need to know about caring for Pea Puffer Fish!

What are Pea Puffers?

Puffer Fish are some of the most unusual and intriguing fish in the world. While most are saltwater fish a few are brackish and fewer still freshwater only.

Puffer Fish are carnivores and active hunters of invertebrates in the wild. Their teeth have evolved into sharp beaks that can crunch through hard shells, claws, and other defenses.

Puffer Fish are in the order Tetraodontiformes, which includes not only one of the smallest freshwater fish in the world – the Pea Puffer – but also one of the heaviest fish on the planet, the Ocean Sunfish!

Pea Puffers are from Southwestern India; specifically the states of Kerala and southern Karnataka. They are found in over a dozen rivers in the region and unlike most of their cousins are purely freshwater fish.

Unfortunately, Pea Puffers are a Vulnerable species and threatened by both the aquarium trade and habitat loss. However as they become more popular, more fish farms are attempting to breed Pea Puffers to ensure wild stocks don’t go extinct!

Here is a basic breakdown on the tiniest Puffer Fish of them all!

How is it possible that fish less than an inch long can be considered territorial and aggressive? It turns out Cichlids aren’t the only mean, personable predators in the aquarium hobby!

While fairly undemanding Pea Puffers have unique diets and social temperaments that make them more challenging than beginner aquarium fish.

As small as Pea Puffers are they can be kept in even nano aquariums. 3 to 5 gallons is a good minimum if you intend to keep a single Puffer. However they are a social species and do better in groups of at least 3. A trio of Pea Puffers can comfortably fit in a 5 gallon tank as well so long as they are the only inhabitants.

Females should always outnumber males with the ideal ratio being 3 females to 1 male. Pea Puffer Fish are difficult to sex until fully mature, however. They don’t actually have a defined gender until social dynamics and maturity allows select dominant fish to become males.

Male Pea Puffers tend to choose and defend territories while females will group and wander throughout the aquarium. Whenever possible give each male Pea Puffer 5 to 10 Gallons of space if keeping more than one in a group or school.

Also make sure there are plenty of breaks in line of sight with decorations and plants so they fight as infrequently as possible. Pea Puffers have sharp teeth and can cause real harm to each other.

Pea Puffers are hardy and accept a wide range of water conditions. However they prefer a slightly soft to neutral pH (6.5-7.0) and temperatures on the warmer side (75-80F).

Hardness should be low to moderate (4 to 10 KH) however both higher hardness and slightly alkaline water levels are acceptable. Ammonia, nitrites, and nitrites are ideally 0ppm however Pea Puffer Fish are not overly sensitive.

While most Puffer Fish are brackish or saltwater fish Pea Puffers are true freshwater fish. They don’t require salt and can’t tolerate even brackish conditions.

As scaleless fish Pea Puffers are especially susceptible to skin infections, however. Ich, fungus, fish lice, and other opportunistic infections have an easier time when poor water quality suppresses their immune responses. Bites from fighting are also easily infected.

Scaleless fish tend to also be more sensitive to medications as they absorb more per dose and can die from overdosing. Prevention through regular water changes is the best medicine in the case of Puffer Fish!

Puffer Fish in general are relatively poor swimmers and Pea Puffers are too tiny to fight even moderate water flow. Current should be gentle to non-existent to keep them comfortable.

Like most social carnivores Pea Puffers are intelligent, watchful animals. Their eyesight is excellent and they take an active interest in you, their tank mates, and anything going on in and around the general vicinity of the aquarium.

Pea Puffers can be hand fed with ease. Sometimes this is the best way to feed them since they don’t swim nearly as fast as Tetras, Barbs, and other active feeders.

Flakes, pellets, and other prepared items can be hard to train Pea Puffers on, especially if they are wild caught. And being natural carnivores flakes and pellets really aren’t the healthiest offering for them.

You should stock up on live and frozen invertebrate foods like Bloodworms, Tubifex, Brine Shrimp, and Daphnia. Finely chopped meaty seafood like squid and shrimp are also excellent choices for Pea Puffers.

Many larger Puffer Fish require clams and other hard shelled items to wear down their teeth. Since Pea Puffers eat a mixture of soft items and tiny crustaceans they don’t need as much crunchy food. However they do appreciate small snails, thawed krill (which still has shells), and other food that takes chewing.

Ramshorn Snails can sometimes establish a breeding population that provides occasional crunchy snacks for a group of Pea Puffers without multiplying out of control. Large adult Snails are generally left alone however baby Snails will be eaten with relish!

Pea Puffer Fish are unfortunately challenging when it comes to choosing tank mates. They have a variable personality and it’s impossible to predict with certainty how they will treat tank mates or even one another.

Male Pea Puffers tend to be territorial and nippy towards each other and intruders. Females are easy going and sociable, forming groups and exploring every corner of the aquarium. Pea Puffers should never be kept with slow moving, long finned fish like Bettas or Gouramis as their trailing fins are just too tempting and will be bitten.

Swift moving, schooling fish their own size such as Tetras and Danios are ideal but can be intimidating for Pea Puffers when food is presented, especially when keeping Pea Puffers singly. You may have to make sure the solo Pea Puffer gets their fair share. Groups and schools of Puffers are much braver and more willing to mix with the crowd at lunchtime, however.

Slow moving bottom dwellers can be a special challenge because they tend not to move as the Pea Puffer sizes them up for a potential bite. Corydoras and Otocinclus tend to be more active and will steer clear of a nosy Puffer.

However they can sometimes lose a chunk of fin or even an eye if kept with an especially aggressive Pea Puffer in a small aquarium. Keeping Pea Puffers in groups is one of the best ways to mitigate their aggression towards tank mates as they tend to focus on each other!

Pea Puffers can also be notoriously aggressive and eager to pick at tank mates regardless of size or type. Yet many other aquarists find that when well fed, freshwater shrimp are left alone, especially larger species like Wood Shrimp.

It’s also worth noting that many aquarists who give reports may be confusing the Green Spotted Puffer (Dichotomyctere nigroviridis) with the Pea Puffer. Green Spotted Puffers should never be kept with any invertebrate unless you intend for them to be eaten.

Pea Puffers are famous for having quirky personalities so I recommend caution if you decide to try keeping them together. However I would not personally risk it. Shrimp are naturally what they eat in nature and Puffers are well equipped to pick apart even large species.

Pea Puffers are one of the only Puffer Fish that can be semi-reliably bred in captivity. I highly recommend trying to breed Pea Puffers. They are not only extremely popular but threatened in nature. Raising captive bred Pea Puffers is not only educational but takes pressure off of wild stocks.

Even if you don’t intend on breeding Pea Puffer Fish knowing how to tell the difference between males and females will go a long way in managing conflict.

Unlike many vertebrates Pea Puffer Fish aren’t born with a fixed gender. As they mature dominant Puffers become males in full and claim a territory, while subordinate members of the group or school become females.

Male Pea Puffers are more slightly more intensely colored than females with deeper yellow belly and darker green patches. Males have a prominent dark stripe along the belly as well as iridescent blue eye patterns swirling about the eye.

Female Pea Puffers are usually more robust and not as intensely colored. They also have black freckles scattered across their backs along with the usual patches and never have blue markings around the eyes.

So long as you match the recommended water parameters and keep them in groups Pea Puffer fish are fairly easy to spawn. Once mature the males will actively court females who enter his territory and spar with rivals for their attention.

If your Puffers refuse to breed reducing temperatures to the low 70’s for several weeks and doing a series of 50% water changes mimics seasonal shifts and provides extra stimulation.

When given ample meaty foods females will swell with eggs and seek out potential mates. Pea Puffers are rough spawners – males will bully and bite even willing females the entire time. They need plenty of hiding spaces.

They embrace over the course of a few minutes, the female deposits her eggs, and is then swiftly ejected with nips from the male. Male Pea Puffers will usually guard the eggs over the course of 5 days until they hatch, fanning them and biting anything that comes near. However, once the young Puffers reach their free swimming phase they are on their own!

Moving Pea Puffer eggs to a fry rearing aquarium is recommended if you intend on raising the babies to maturity. There are too many hungry mouths in most aquariums and Pea Puffer fry are tiny (1 to 1.5mm in length). In heavily planted tanks several may survive to maturity, however.

Eggs take roughly 5 days to hatch and should be kept in well oxygenated, extremely clean, warm water(78-82F). Fish eggs in general are highly susceptible to fungus and fungal remedies should be readily on hand at the first sign of fuzzy growths.

When newly hatched Pea Puffers have a substantial yolk sack and can’t swim for their first 3-4 days. Once they reach the free swimming stage they will have doubled in length and accept live Brine and Fairy Shrimp Nauplii, Cyclops, and other tiny, moving crustaceans.

Fresh Infusoria are also perfectly sized for newborn Pea Puffers. If you’re uncertain about raising or sourcing live prey for baby Pea Puffer Fish have a look at my Guide to Live Fish Food!

By 1 month of age Pea Puffers resemble miniature versions of their tiny parents. With a few more weeks of generous feedings they will be large enough to be introduced into the main aquarium or offered to local aquarium stores!