Fancy Goldfish breeds come in a staggering assortment of varieties. From the still popular Common Goldfish to Orandas and Ranchus, these fish have as many varieties as dogs or cats! You’re likely already familiar with the Black Moor breed!

The name “Black Moor” is an Iberian reference to the North African Muslims that dominated the region in the 1400’s. It’s likely that these goldfish were introduced to Europe from China as the wars for control of Spain and Portugal were taking hold.

Likely, the name was meant to be insulting to the Moors of the region. In Japan, Telescope Eye Goldfish are known as 出目金 (Demekin). And in China, they go by Dragon Eye Goldfish!

No matter what you decide to call them, there’s little doubt that Black Moors are some of the most popular and quickly recognizable Goldfish around. In fact, nearly every aquarist has kept one at one time or another.

They are a bit wobbly but always personable. What else is there to know about Black Moor Goldfish care?

In this section we’ll learn about aquarium size requirements, feeding instructions, setup, and much more.

When young, you can keep your Black Moor in aquariums as small as 5 to 10 gallons. That said, I never recommend keeping Goldfish in bowls. Filtration is a major problem as is proper oxygenation and available space.

As they grow older, they get significantly heftier as well. Goldfish are an excellent example as to why the inch per gallon rule is a myth. Six 1-inch Neon Tetras don’t have nearly the same impact on space and water quality as one 6-inch Black Moor Goldfish.

Goldfish are, unfortunately, very messy animals. They not only poop loads but root around constantly on the bottom of the aquarium. This digging about stirs up debris that would otherwise sink into the gravel and decompose. 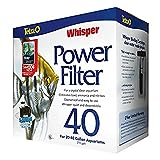 As a fancier, massively inbred variety, Black Moors are on the sensitive side when it comes to water quality. Discolored scales, mucus patches, inflamed fins, and cloudy eyes are very common if ammonia is allowed to build up.

Ammonia, nitrite, and nitrate should all be as close to 0ppm as possible. Temperature-wise, Black Moors prefer room temperature to slightly warm water (60-74℉). Tank-raised fancy Goldfish tend to be a little less cold tolerant than their wild ancestors, especially if they were bred in tropical conditions.

I don’t recommend keeping Black Moors or any other Goldfish in tropical conditions. Like most fish, they are endothermic, meaning their metabolism is regulated by the temperature of their environment.

It’s best to keep them on the cool side, which means slower growth but cleaner water. And clean water always means healthier, happier Goldfish!

Plants are another area where Goldfish can be a challenge. Since they love to dig and do so constantly, Black Moors tend to disturb sensitive plant roots. They may even uproot and eat them if they are soft, delicious varieties like Cabomba or Anacharis.

If you’re going to provide plants, choose tough epiphytes like Anubias or Java Fern. Epiphytes are plants that, instead of rooting in the gravel, can attach to hard surfaces like rocks and driftwood.

Epiphytes get their nutrition from the water column, making fertilizers not as important since fish waste provides loads of nitrogen, phosphorus, and other nutrients. Most epiphytes also grow just fine in low light conditions, making specialized full-spectrum plant lights unnecessary!

Although they love to dig, Goldfish aren’t picky when it comes to substrate choices! Sand or gravel works wonderfully for them. I prefer gravel in Goldfish tanks myself since sand tends to form pits and piles when dug into.

Gravel, being heavier, keeps its form better despite the efforts of your Moors! It also hides debris better by allowing it to fall between the cracks.

Goldfish are excellent community fish and do well with any fish that can tolerate cold water temperatures. This includes many Tetras, Livebearers, Danios, and Barbs. Black Moors also do well in tropical conditions up to 75℉ but do better if kept in room temperature conditions.

Other Goldfish are by far the best companions for Black Moors. If you have an outdoor Koi pond or container pond, Koi are also great companions! While larger, they are entirely peaceful and look especially graceful alongside the wobbly Moors!

The worst tank mates for Goldfish are aggressive fish like Cichlids and large Catfish. Goldfish have no concept of territory or personal space. Bumbling about will get them constantly nipped by Cichlids and peering into caves will get them smacked or bitten by many Catfish.

Given how sensitive their telescope eyes are, you should take care when keeping Black Moors with toothy tank mates. Many algae eaters also cause problems for slow moving, slow witted Goldfish.

Plecostomus and Chinese Algae Eaters in particular love to latch onto their sides to slurp on their slime coating. This is not only stressful but opens up paths for infections to take hold.

Often, an unsuspecting aquarist buys a young Black Moor Goldfish and provides it with a nice, spacious new aquarium. As the Goldfish eats and grows though, something peculiar happens. Orange patches begin to develop on its sides, its fins, and even its eyes!

How strange! However, this is something that happens fairly frequently with Black Moor Goldfish. The causes are typically genetic; Goldfish are, after all, typically golden in color.

As they grow, some of these genes may express themselves due to dietary, temperature, seasonal, or hormonal shifts. Your Black Moor may end up entirely orange, remain patchy, or shift back to black as it matures.

Since poor water quality can cause color changes, make certain that your ammonia, nitrite, and nitrate levels are all close to 0ppm. Otherwise, you may be looking at a stress reaction.

When it comes to Black Moor Goldfish care, feeding just might be the easiest part because they are true omnivores. An omnivore is an animal that eats both plants and animals.

In nature (and ponds) Goldfish hunt along the bottom for worms, insect larvae, soft plants, fish eggs, and anything else that’s small enough to be eaten. 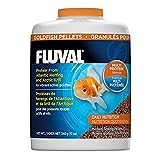 In aquariums, you should provide a mixture of prepared and fresh options. A high quality flake or pellet food can be the base of their diet. I prefer pellets because they don’t disintegrate as quickly as flakes and adult Goldfish can eat more of them much faster.

And from there, offer bunches of soft, inexpensive plants like Anacharis for them to devour or gently boiled vegetables like zucchini and spinach. Mix in live or frozen foods like earthworms, blood worms, and tubifex, and you will have some very happy Black Moors!

While Goldfish are extremely easy to breed they aren’t exactly easy to tell males from females apart. Wild type and common Goldfish are easier; females tend to be plumper and longer than males when mature. But all Black Moors are plump!

Fortunately, there is still a way to know. During the breeding season, all male Goldfish grow bony white breeding tubercles on their faces and gill covers. It’s not 100% foolproof as females may develop a few and young males may not grow any at all.

But if you have a feisty Moor covered in tubercles that’s chasing around even more plump Moors you’ve likely got a male in perfect breeding condition!

Black Moors are egg scatters by nature. This means they don’t provide any care for the eggs or fry. Goldfish meet in patches of overgrown weeds to mix their eggs and sperm. Once fertilized the eggs attach onto the first surface they come in contact with and the parents forget about them.

Unfortunately, Goldfish are especially bad parents. In aquariums they will simply eat and eggs and fry they come across. If you raise Goldfish in outdoor ponds you have a much better chance of seeing some eggs and fry survive to adulthood.

Otherwise, it’s best to remove the plants your Goldfish spawn on to raise in a separate quarantine tank! Plastic varieties of Guppy Grass or Vallisneria are perfect for providing an easily moved spawning mop once you see your Goldfish getting thicker.

When newly born, Goldfish fry survive purely on their yolk sac for 2-3 days. After this period they begin feeding on infusoria and other single celled organisms.

Within a week you can start providing brine shrimp nauplii, micro worms, and other tiny live and frozen items until they grow large enough to eat powdered flake food!