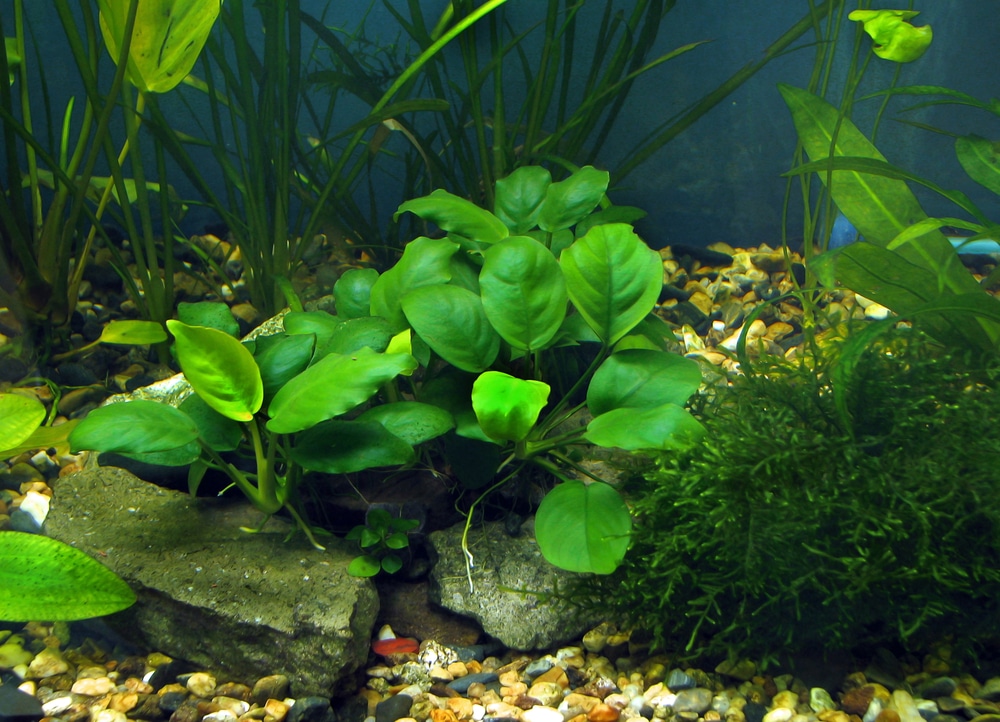 Why are Anubias so popular in the aquarium trade? Well, for starters, they come in diverse varieties that make an all-Anubias tank possible if you fall in love with them.

Anubias are attractive, easy to find, and will thrive in nearly any aquarium. But in case you’re not familiar, let’s first explore how to care for these unusual African plants.

Anubias are one of my favorite aquatic plants. They are a versatile, nearly bulletproof group of flowering Arums native to tropical Central and West Africa.

Anubias get their name from the Egyptian God of the Afterlife Anubis. The shady riverside habitat of these plants makes them natural complements to the mythology of Anubis.

Anubias are popular in the aquarium trade because they are extremely undemanding. They not only tolerate but prefer low light environments, naturally occuring in partial shade among taller plants.

As a result Anubias grows quite slowly compared to other plants. A single new leaf per 1-3 months is not unheard of. Anubias will occasionally send up a flower spike through the water column that fully matures once it breaks the surface. Like the leaves Anubias flowers are slow to mature and will last weeks at a time.

They are also epiphytes. This means their roots are exposed rather than buried like most plants. In fact, burying Anubias rhizomes is the fastest way to kill one.

Instead, they need to be attached to driftwood, rocks, and other rough surfaces. Over time the Anubias will secure themselves in place to create natural accents to decorations in your aquascape!

The rhizome is also the easiest way to propagate Anubias in an aquarium. They can be pollinated through their flowers and seeds gathered. However, splitting the rhizome with a sharp knife will give you two clones that will heal and thrive.

Anubias come in several types, all of which have similar care requirements. They range from the Dwarf Nana varieties to the massive A. gigantea. All are closely related and many will hybridize for Anubias with intermediate characteristics.

Some types even have subvarieties, such as the several types of Nana, which are themselves an offshoot of A. barteri!

Anubias afzelii was the very first species to be scientifically described (1857). Despite its long history in the scientific field it is sometimes sold under a false Latin name (Anubias congensis).

A. afzelii has an elongated leaf structure rather than the teardrop shape typical of Anubias species. This species is also significantly larger, with leaves over 12 inches in length, making it an ideal show specimen for the planted aquarium.

The red tint to the rhizome is also striking and adds a note of color among dark driftwood and rocks.

Like all Anubias, A. afzelii can grow above water or submerged but prefers growing in air. This makes it a great show plant for paludariums with enough space to contain them. Even when kept in smaller aquariums and paludariums their slow growth rate ensures they won’t need transplanting for years to come.

Of all the Anubias types available A. barteri is the most popular and affordable species. At up to 12 inches in height at maturity, A. barteri is an excellent mid to background plant, depending on the size and layout of your aquarium.

Anubias barteri is often sold in planted pots; this species is tolerant of being rooted in gravel like other plants. However it still flourishes best when the rhizome is allowed to remain exposed and secured to a hard surface.

The large, elongated leaves are elegant and a stark contrast to many of the other varieties of this species.

As the most popular Anubias variety, A. barteri has several variants commonly available. A. barteri var. nana, also simply known as A. nana, is a dwarf breed that is fully mature at under 5 inches in height. It’s also a naturally occurring variant found in Cameroon, rather than one developed through human selection.

Anubias nana has teardrop shaped leaves rather than the longer leaves of its parent A. barteri. Its size makes it the perfect type for nano aquariums were space and light intensity are limiting factors!

Anubias nana comes in several types, including “Round Leaf,” “Marina,” “Bonsai,” and “Petite.”

If you love nana but want a carpeting foreground version then Anubias nana “Petite” may be ideal for you. This variety is even smaller than A. nana, reaching only 2.5 inches in height.

Another naturally occurring variant of A. barteri, Coffeefolia is one of my favorite types of Anubias. The name refers to the strong resemblance to Coffee Bean Tree leaves in both color and texture. A. barteri Coffeefolia has deep, forest green leaves with a ribbed texture unique to the genus. Deep red can also be seen along the stem and rhizome.

Since it’s naturally occuring its sometimes sold simply as A. coffeefolia as plant classification is often messy. Coffeefolia is one of the larger types of Anubias, reaching up to 12 inches in height and is an excellent fill plant for shaded areas of your aquascape.

Anubias gigantea lives up to its name as one of the largest types of Anubias. The leaves alone can exceed 12 inches in length and 6 inches in width, with the entire plant approaching 18 to 24 inches in height at maturity. This makes it a perfect showpiece or background plant.

Given how slowly Anubias grow and the surface area of these massive leaves, pairing Anubias gigantea with algae eaters is key to preventing algae from taking hold. Black beard algae is especially fond of Anubias leaves but others will regularly colonize them.

A. gracilis has unique arrowhead shaped leaves that make it an especially elegant type of Anubias. Unlike most species Anubias gracilis has a clear preference when it comes to water. In nature it grows in seasonal floodplains in West Africa.

While it will do well submerged it grows significantly taller out of water, with leaves exceeding 12 inches in length.

Anubias hastifolia has a distinctive arrowhead shaped leaf reminiscent of A. gracilis but not nearly as pronounced. Anubias hastifolia is also a larger type of Anubias, reaching as tall as 16 inches in height with 10 inch leaves.

The stems of A. hastifolia are especially long and the entire plant has far fewer leaves compared to most types of Anubias. The elongated, graceful form makes it suitable for midground and corners in any aquascape or paludarium!

From nano planted tanks to massive aquascapes, there’s a type of Anubias for every aquarist out there.

Even if you don’t wish to invest in CO2 systems, expensive full spectrum light fixtures, and fertilizers, Anubias can provide a bit of greenery for minimal expense or effort!