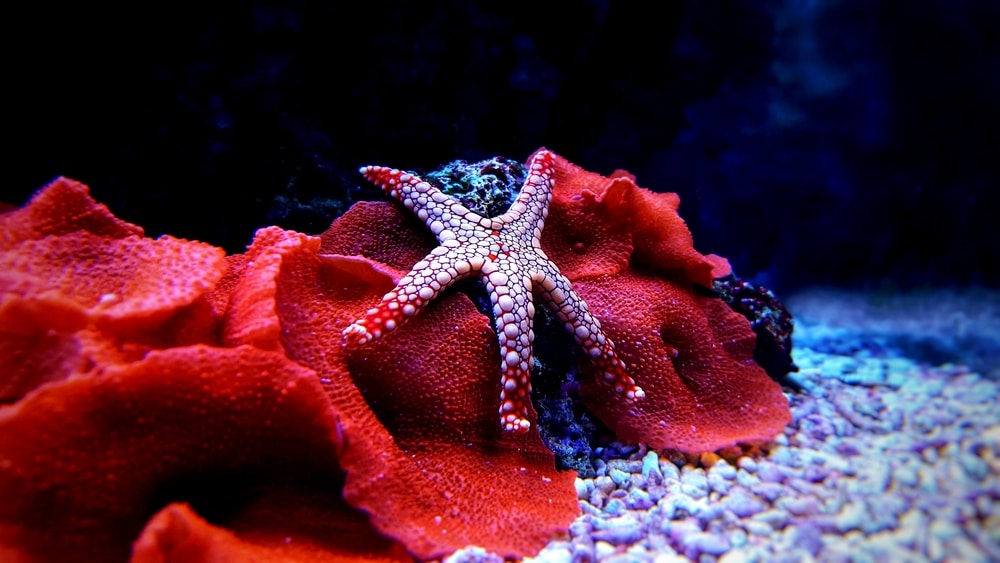 Starfish might be one of the most familiar animals on the planet. They are one of the first things children learn to draw in school. And anyone who has been to an aquarium exhibit has seen starfish in the tidal pools.

But how much does the average person actually know about starfish? As it turns out, they are a mystery to just about everybody! How fast they grow, how big they get, and most importantly, what do starfish eat?

Starfish belong to the phylum Echinodermata (lit: ‘hedgehog skin’). Their entire group includes sea cucumbers, sand dollars, and sea urchins, all of which have hard, spiny skins. All Echinoderms are slow moving bottom dwellers but starfish are the cheetahs of the group, in more ways than one.

Brittle Starfish, core members of saltwater aquarium clean up crews, are especially speedy as they use their limbs to physically wrap around rocks to pull themselves along. However most are slower, using tube feet that fill with pressurized sea water to glide along the bottom.

Interestingly, Echinoderms have no freshwater or terrestrial members! Despite being one of the oldest animal phylums they have remained entirely ocean-going for over 500 millions years!

Starfish have some fascinating abilities as well. Many have the ability to regrow lost limbs over time and a few can even regrow a new body.

Usually, a small amount of the central disk needs to be included with the severed limb, but not always. Asterina Starfish, a common pest in saltwater aquariums, will often regrow into several starfish if carelessly crushed or chopped into pieces!

Starfish are about as foreign to a human as any alien! But what do starfish eat to keep themselves prowling along?

What Do Starfish Eat?

Most starfish are slow grazers, scraping algae, biofilms, and other crusty slimes from rocks and coral outcroppings. Starfish, on the other hand, are mostly active predators that run (crawl) down other slow moving bottom dwellers.

Anything that’s slow or dead enough to be caught is potential prey. They prefer feeding on fish carcasses and slow or sedentary (non-moving) invertebrates like mussels or corals. Hard corals are typically safe, except for a few exceptions, which we’ll discuss later.

Soft corals and sea anemones are often on the menu for many predatory starfish. Even other echinoderms like sea cucumbers or sand dollars are sometimes prey. However starfish usually prefer fleshier items.

In the aquarium, the majority of starfish in the hobby are very simple to feed. Chopped meaty items like fish, shrimp, or squid should be placed near their arms or oral disk (mouth). The mouth is underneath the starfish and at the center of where their arms come together.

Unless their tank mates are slow or full enough not to disturb the food it’s better to hand-feed starfish. They are so slow that fish, shrimp,and other mobile tank mates will gladly come and eat any food you place for your starfish.

Even if they aren’t actually hungry, fish taking test bites may irritate and drive off the starfish, preventing it from feeding properly.

Brittle Starfish are a safer bet as these specialized nocturnal starfish feed almost exclusively on detritus (decaying organic matter). But be careful; a few, including the Green Serpent Starfish (Ophiarachna incrassata) are active predators that get big.

At night, they will gladly snake out a long arm to snatch small, sleeping fish. Nightly disappearances of fish and shrimp are often a sign you have a hidden serpent starfish in your live rock!

How Do Starfish Eat?

How they eat is by far the most interesting thing about starfish! When attempting to eat a clam, mussel, or other bivalve (double shelled mollusk), the starfish uses the immense suction power of its tube feet and arms to crack the shell open ever so slightly.

Considering how strong the adductor muscle (what holds the shell closed) of a bivalve is, it’s incredible that the seemingly fragile starfish manages to do so. Some mollusks, like scallops can swiftly clap their shells to “swim” to safety if they sense the touch of a nearby starfish.

Others, like cockles, rapidly kick their long foot to try and escape. But many clams, oysters, and mussels are stuck in place. While they typically group for protection, there’s always a chance a hungry starfish will decide to strike.

The starfish wraps itself around its prey and attaches as many tube feet as it can to the shell. From there, it begins to pry with all the patience of a cold-blooded, mindless predator.

Once a small open is achieved, the starfish literally spits out its stomach into the shell of its prey. The stomach then secretes acids that start digesting the clam inside its own shell.

Starfish are also known to feed on sponges, corals, and other immobile organisms. The Crown of Thorns Starfish (Acanthaster planci) has become world famous because it specializes in feeding on hard coral polyps.

Due to a combination of a loss of natural predators and climate change the starfish population has been exploding out of control for decades. The starfish crawl over healthy coral and spit their stomachs out, digesting the polyps and leaving room for algae to grow in their place.

The starfish are not only spiky but both poisonous and venomous as well! They can sting divers through their wetsuits and the venom causes burning that lasts for days. They are an immense problem and are hastening the decline of the Australian Great Barrier Reef, in particular.

Starfish in general have few predators. They are simply too spiny and unappetizing for most animals to take a bite. Triggerfish and Puffer Fish are willing to try them, however. These fish are specialist invertebrate hunters that have massive teeth and powerful jaws. If you have an Asterina Starfish infestation owning either of these fish ensures they will stay under control.

One famous specialist predator is the Harlequin Shrimp (Hymenocera picta). They are absolutely beautiful and some of the most sought after shrimp for reef aquariums. However they only eat starfish!

Fortunately, they are pretty unselective as to the type of starfish. Most Harlequin Shrimp keepers buy relatively inexpensive Chocolate Chip Starfish, which the shrimp will usually eat over the course of a week.

Often, they come in mated pairs. The male and female will work together to flip the starfish over, nipping at the tube feet and arms to keep it from running away. Harlequin Shrimp are also the best animals for clearing an aquarium of Asterina Starfish!

Starfish are some of the most alien and unusual creatures on the planet. While they aren’t always super easy to care for, they are eager eaters so long as you provide it good water quality.

Starfish are very easy to please in the aquarium: anything meaty and unmoving will satisfy predators like Chocolate Chip Starfish. If you have grazers like Brittle and Luzon Starfish, a healthy coating of algae and biofilm combined with any leftover food they can scrounge will keep them happy!