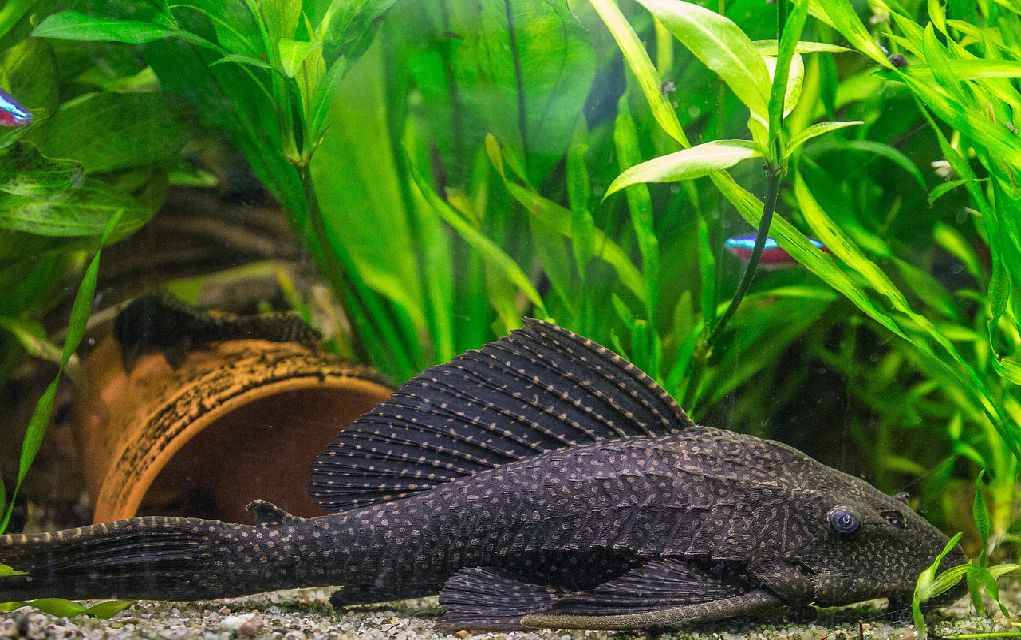 Plecostomus, sometimes known as suckermouth catfish, are one of the most popular freshwater aquarium fish in the hobby.

They’re known for their unique appearance, helpful algae-eating abilities, and for being great community fish.

In this guide, we cover everything you need to know about common plecostomus species and how to care for them!

What is a Plecostomus?

“Plecostomus”, “Pleco” or “Plec” is a collective name for a large variety of catfish from the Loricariidae family. All are naturally found in Central and South America. This is not just a common name for one genus: there are literally hundreds of Plecostomus varieties from different genera out there. Every habitat has its own species, from the calmest rivers to the most fast flowing streams. One thing all Plecos have in common is their suction cup-like mouth.

Not all Plecostomus varieties have been properly scientifically described yet, as new species are sometimes discovered faster than they can be examined and named. This means naming is often unclear.

After all, if there’s three common names out there for the same catfish and some are also used to describe other species of freshwater catfish, things get pretty confusing. In order to combat this issue, the L-number system was introduced.

Newly discovered Plecostomus species are given a number, which is utilized until a proper scientific name can be added. Even after the species is described the L-number is still sometimes used. For example, the popular zebra Pleco is better known as Hypancistrus zebra, but also still goes by it’s L-number: L46.

If you are in search of an algae eater for your tank, check out our complete list of the best algae eaters for freshwater aquariums.

Because the natural habitats of the many, many Plecostomus species out there vary greatly, no two varieties require the same care. If you’re interested in keeping a specific species, always do plenty of research before running out to the aquarium store.

There is one point I want to note for all Plecos. These catfish are very popular in the aquarium trade, but unfortunately their popularity also comes with plenty of misinformation.

First off, Plecostomus catfish are not “algae eaters”. Their diets differ. Some will eat some algae, others won’t touch them. You should never go out and buy a Pleco because you have an algae problem. It’s up to you to keep your aquarium clean, not up to a fish! Besides, all Plecostomus species produce a lot of waste and will likely only make your aquarium dirtier.

Their high waste output makes Plecos totally unsuitable for small tanks. On top of that, some varieties grow very large and should pretty much be avoided entirely unless you have an indoor pond!

Surprisingly, some of the most popular Plecos actually make the worst choices, especially for beginners. The minimum tank size for the absolute smallest Plecostomus species is around 30 gallons – and don’t go easy on the filtration. Some Plecos can be very sensitive to bad water quality, so stay on top of your tank maintenance, do plenty of water changes and keep a close eye on your water values.

If you’re looking to stock a smaller tank, try to avoid Plecos. Check out this amazing guide to stocking a nano aquarium.

Most Common Types of Plecos

I won’t bother trying to describe all the Plecostomus species out there – there are literally hundreds of L-numbers. Some are easier to find than others. Below you’ll find a few of the most popular Plecostomus varieties, as well as some of my personal favorites.

Keep in mind that not all of them can be found at your local aquarium store for $9.99 – some Plecos fetch hundreds of dollars!

Also known as bushynose Plecos, these catfish from the genus Ancistrus derive their name from the males’ bushy facial growths.

Bristlenose Plecos are probably the most popular as well as the most beginner-proof Plecostomus variety. You can find these at most pet stores and they’re relatively hardy when it comes to water quality. They’re even easy to breed! As long as you’ve got two healthy adults and a few caves, fry should eventually appear.

One of the most coveted Plecostomus species out there, zebra Plecos can go for $100 or more depending on your aquarium store. They feature a lovely black and white zebra pattern and are one of the smaller Plecos out there at a maximum size of around 3″/8cm.

Despite their size, it’s not a good idea to keep zebra Plecos in a small aquarium. They naturally hail from fast-flowing waters that are very clean, which means they don’t respond well to low water quality at all. Consider adding an extra filter; preferably one that causes plenty of water movement, as high oxygen levels are a must.

Another small Plecostomus with spectacular markings! Clown Plecos are appreciated for their black, silver and orange bandings.

If you’re interested in keeping this species be sure to have plenty of driftwood ready. Although they also graze on algae and do need some protein, clown Plecos mainly eat wood. Make sure there’s plenty to go around! Because wood doesn’t digest very well, be prepared for a lot of poop. Frequent vacuuming is in order here.

Remember when I said some Plecos should be avoided unless you have a very large tank?

As their common name implies, common Plecos are relatively popular. Most of this popularity is based on misinformation; many aquarists have bought this tankbuster without realizing it grows absolutely massive. An adult size of 20″/50cm is not unheard of. Contrary to what many pet stores will tell you, this fish is not a “tank cleaner”.

If you’ve got a big tank to spare, the common Plecostomus is a fascinating fish to keep. Provide it with a large hiding cave and be sure to avoid any small tankmates.

Another tankbuster that’s somehow still freely available at aquarium stores is the sailfin Plecostomus (or leopard Plecostomus). Although like the common Pleco it is interesting to keep and a great tankmate for other large fish species, the sailfin Pleco is probably best avoided by most aquarists.

If you’re interested in keeping this giant, you’ll need a 100+ gallon aquarium. As with other Plecos, don’t go easy on the filtration and do regular water changes. Keep in mind that plants might be eaten or accidentally smashed.

Although like common and sailfin Plecos the red-eyed royal Plecostomus grows quite massive, it is less commonly sold. Luckily, this means there are less issues with this fish ending up in uninformed fishkeepers’ tanks.

This species should be kept in aquariums of at least 100 gallons (preferably more). As with the clown Plecostomus part of its diet consists of wood, so be sure to have plenty lying around. Provide ample hiding places and be prepared to do regular large water changes.

Numbers L18, L81, L85 and L177 from the Baryancistrus genus are also known as gold nugget Plecos. An appropriate name, as these Plecos feature a stunning pattern of yellow polka dots as well as yellow-rimmed dorsal (back) and caudal (tail) fins.

This is not an ideal beginner Plecostomus. It can be pretty fragile and needs clean, well-oxygenated water. Give your aquarium plenty of time to mature before considering adding a gold nugget Plecostomus and be sure to keep the water pristine.

Yet another spectacularly patterned Plecostomus, the snowball Pleco has a black body covered in cheerful white polka dots. This species is quite popular in the L-number hobby.

Like gold nugget Plecos, the snowball Plecostomus naturally occurs in fast-flowing river systems. This means you’ll have to create a similar environment in the aquarium. Plenty of water movement and dissolved oxygen, clean water and hiding places in the form of driftwood and caves are musts.

Also known as the mustard spot Plecostomus, this is another wood eating Pleco appreciated for its spotted pattern.

Care for this Pleco is pretty straightforward. Be sure to provide plenty of hiding caves and make sure driftwood is available in the tank at all times. This varieties does seem a little more aggressive towards its own species and even other Plecos, so it might be best to keep it alone or at least avoid keeping multiple males.

Last but not least, the peppermint Plecostomus is another polka dotted Pleco. It can reach an adult size of around 7″/18cm and naturally occurs in a relatively fast-flowing river. Not the most common variety out there, but definitely worth searching for! In the aquarium, offer plenty of caves and other hiding places.