Picking out fish for your freshwater tank can be tough…

There are thousands of different species – not all of which make the best pets. Catfish are one of the most popular picks among beginners and experienced aquarium owners because of their unique look and interesting personalities. That said, picking the right type of catfish is extremely important.

In this guide, we share our 10 favorite types aquarium catfish for fish-keepers of any skill level (and everything you need to know about keeping them healthy!). 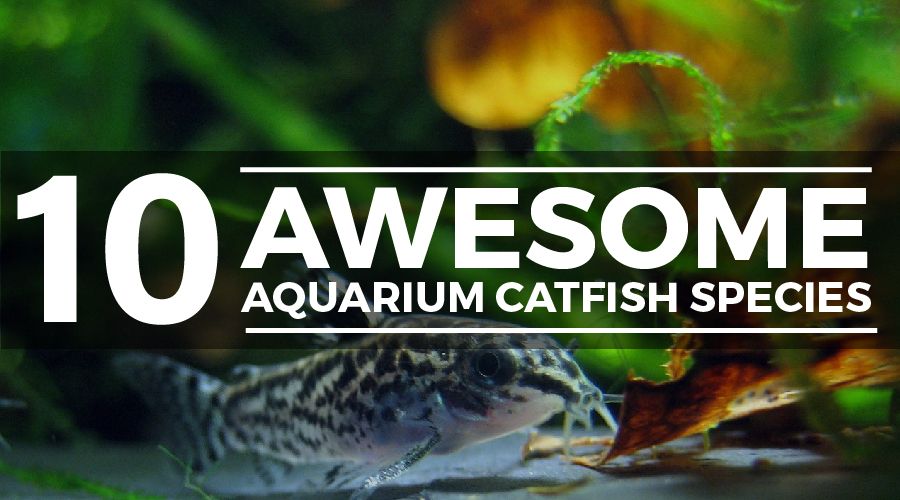 Here are a few common types of aquarium catfish that we recommend keeping: 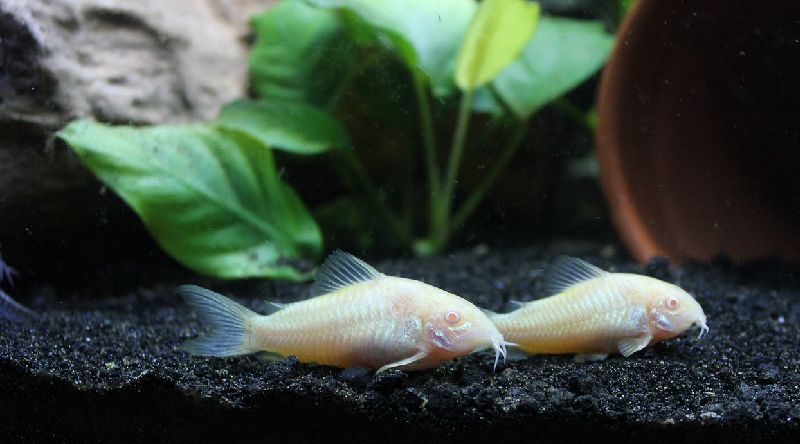 Corydoras Catfish definitely rank at the top of my list – if you’ve followed this blog at all, you’d know that they’re one of my all-time favorite fish.

A relatively small species of aquarium catfish, Cories generally don’t grow larger than 2 or 3 inches – making them a great choice for those with tanks as small as 20 gallons. In addition to their small size, Cory Catfish are also beginner friendly (although they do have a few specific needs).

Since Cory Catfish are a schooling species, they should always be kept in groups of 6 or more. Keeping a Cory solo will usually cause extreme stress – something you always want to avoid with your fish. Here are a few other important care needs that you should be aware of:

As you can probably tell, the Glass Catfish is truly a “one of a kind” species. Named after their completely transparent bodies, these interesting aquarium catfish (sometimes referred to as Ghost Catfish) are great community fish that give a unique look to any freshwater tank.

Much like Cories, Glass Catfish are a schooling species. I only recommend keeping them if you have room for 5 or 6 individuals – like many schooling species, they tend to become reclusive and stressed if kept alone.

Another unique aspect of the Glass Catfish is that they’re a low light species, prefering tanks that are somewhat dark. That said, you don’t have to keep them in a pitch black tank 24/7 – they do well in regular community tanks as long as you give them plenty of caves and live plants for cover. 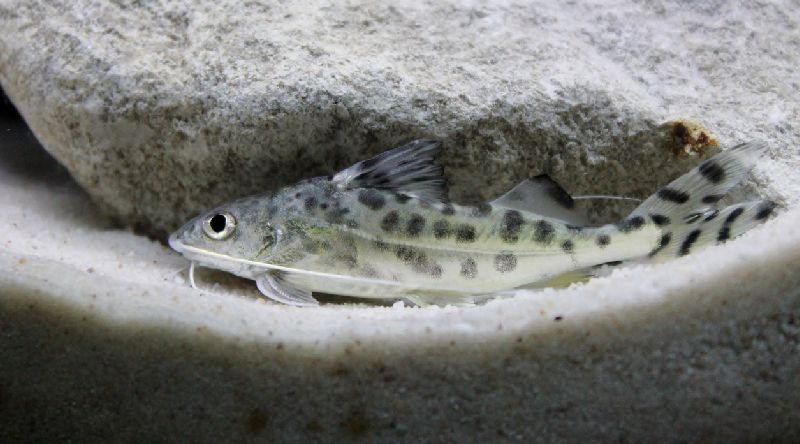 The Pictus Catfish is a popular species of aquarium catfish made famous for their long antennas and classic silver coloration. Although generally considered a peaceful community species, Pictus Catfish shouldn’t be kept with fish small enough to become easy prey – avoid anything that looks small enough to fit in their mouth (such as Neon Tetras).

Pictus Catfish are strong eaters and will generally devour any type of food offered. That being said, they’re omnivorous by nature and should be fed a mixture of plant-based and meat-based foods – high quality flake foods and freeze dried blood worms/frozen brine shrimp tend to work well.

Pictus Catfish usually stay under 5 inches, relatively small for catfish standards. When young (2-3″), they prefer to be kept in schools of 4 or 5 individuals. As Pictus Catfish grow, though, aggression can start to arise.  If you plan to keep a small school, make sure to watch for aggression as your fish age.

If you’re looking for something that will really turn heads, look no further that the Upside Down Catfish. As their name suggests, these amazing little aquarium catfish spend most of their time swimming around and grazing the surface completely upside down. That said, don’t be surprised if they swim normally as well – a lot of Upside Down Catfish, especially young ones, swim right-side up when scouring the tank bottom for food.

The Upside Down Catfish is very similar to the Cory Catfish in size, appearance, and temperament. Much like Cories, they prefer to be kept in smalls schools of 5 or 6 individuals – for a school of this size, a 30-40 gallon tank should be adequate. In addition, Upside Down Catfish appreciate well planted aquariums with broad leaf plants (such as Anubias).

Like most of the other species on our list, Upside Down Catfish are omnivores and do best on a mixture of flake food and meat based foods (such as frozen brine shrimp or freeze dried bloodworms).

I could go on for hours about how amazing Otocinclus Catfish are…they’re mild tempered, interesting to watch, and have huge appetites for pesky algae. In fact, Oto Catfish were the fish of choice of Takashi Amano (often regarded as the “father of modern aquascaping” and one of the all-time greatest aquarists).

Because of their gentle demeanor and insaciable appetite for algae, Otocinclus Catfish make an excellent choice for anyone considering setting up a planted aquarium – especially if you want to get into aquascaping. They have a knack for ridding tank glass and plant leaves of algae without damaging the plants themselves (which we can’t always say for Plecos).

Oto Catfish prefer heavily planted tanks – but that’s not all they need. To help keep your Otos as stress-free as possible, make sure to supply them with plenty of driftwood to use as cover. In addition, Oto Catfish prefer tanks with a little bit of water flow. 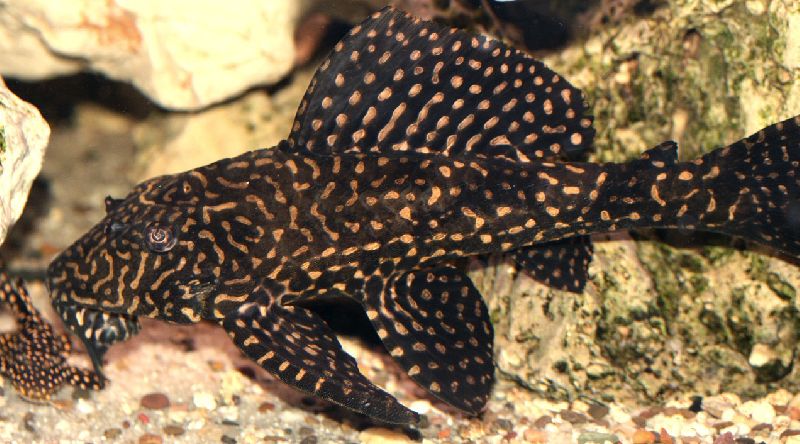 The Bristlenose Pleco is one of the most well-known aquarium catfish in the hobby, and for good reason – they are easy to keep, peaceful, and great algae eaters. In Pleco standards, Bristlenoses stay relatively small at just 4-5″ (compared to common Plecos, which can reach almost 2 feet!). For this reason, the Bristlenose Pleco make a great alternative to other Pleco species.

Bristlenose Plecos are generally easy to keep and can tolerate a wide range of water conditions. In addition, feeding is a breeze with these fish – they will scour the tank bottom relentlessly looking for scraps of leftover food, helping keep your tank clean and clear. That said, uneaten scraps usually aren’t enough to sustain a full grown Pleco. Algae wafers, high quality flakes, or other plant based foods should be fed regularly.

I usually recommend the Bristlenose for those interested in keeping Plecos, but the Clown Pleco definitely shouldn’t be ignored either! At just 3-4 inches, the Clown Pleco is one of the smallest of its species, making it a great choice for those with smaller tanks (though I still recommend 20 gallons at a minimum).

One interesting fact about the Clown Pleco is that they feed mainly on driftwood. For some aquarists, this can pose a little bit of a problem – if you plan to keep this species, driftwood is a must to keep a constant food supply. In addition to driftwood, Clown Plecos are also known to snack on vegetables such as Zucchini, Cucumber, and Squash. Unlike their Bristlenose counterparts, Clown Plecos don’t quite have as large as an appetite for algae (though they will definitely help keep you tank a bit cleaner).

Other than their unique feeding habits, Clown Plecos are easy to care for and make a great choice for anyone looking to keep freshwater catfish.

The Striped Raphael Catfish is definitely one of the larger catfish species on our list – growing to 7-10″, this fish is reserved for those with 60+ gallon tanks (many say that you can get away with a 30 gallon, but I don’t recommend it).

Like most species on our list, the Raphael Catfish is omnivorous and requires a mix of plant-based and meat-based foods to thrive – high quality pellets and meaty food (such as bloodworms or brine shrimp) makes a great mixture.

Originating from South America, the Bumblebee Catfish is a highly sought after species made famous for their unique yellow and black markings. Unlike most species in the Pimelodidae family, the Bumblebee Catfish stays very small, rarely growing over 3 inches (making them great for tanks as small as 20-30 gallons).

Although generally thought of as a peaceful species, the Bumblebee Catfish will sometime go after fish small enough to fit in their mouths. If you decide to keep this species, try to avoid any exceptionally small fish or shrimp. That said, Bumblebees to great with tank mates of equal or larger size.

The Bumblebee Catfish is a strong eater and should be fed a mixture of sinking pellets and meaty foods, such as bloodworms or brine shrimp. As a nocturnal species, they may be more active at night, but will usually adapt to feeding during daytime hours as well.

Although this species looks a lot like the Otocinclus features above, it couldn’t be more different. Growing up to 10″, this large catfish can actually become quite aggressive as it grows (despite its relatively peaceful appearance).

As its name suggest, the main food source for this species is algae found on tank walls, rocks, and plants. That said, I always recommend supplemental feeding of algae wafers since a well kept tank usually doesn’t have an abundance of algae.

Here are a few aquarium catfish species that you should probably avoid: 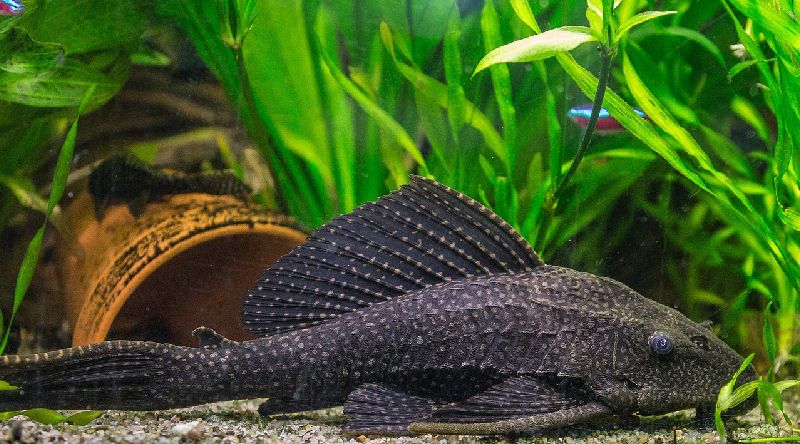 The Common Pleco isn’t necessarily a “bad” fish – they aren’t aggressive, hard to keep, or picky eaters. Their large size just makes them impossible to keep for most aquarium owners. Unfortunately, Common Plecos are sold every day to unknowing fish-keepers simply as “algae eaters”. Most people are unaware, though, that these fish will grow to over 2 feet!

If you want to keep a Pleco, there are much better options – the Bristlenose Pleco and the Clown Pleco both make great choices and are much more suited for small tanks.

This massive Catfish species originates from the Amazon River and can grow to nearly 5 feet! Needless to say, the Red Tailed Catfish does make a good choice unless you have an absolutely massive tank.

Surprisingly, this species is actually found in fish store more often than you would think. If you come across a Red Tailed Catfish when shopping for your next fish, you’re probably best off avoiding it.