Bettas (Betta splendens) are one of the most popular fish in the aquarium hobby, for reasons both good and bad.

The good is that they are tolerant of a wide range of water chemistries and temperatures and don’t need much space to live in.

The bad thing is that this makes people assume they actually prefer living in such environments.

Well-meaning and simply greedy aquarium store owners often perpetuate the half-truth that Bettas prefer small pools of foul water and are perfect for folks looking for a budget fish option!

Common Question of the Day: Do Betta Fish Need a Filter?

This is one of the most common questions among new betta fish owners – let’s look into our answer.

Filtration is incredibly important. Not only do filters pull out suspended matter from the water column; they also create surface area for beneficial bacteria to colonize.

These bacteria take ammonia and begin the conversion to nitrite and eventually nitrate, the least lethal form. In a tank with no biological activity, ammonia simply collects over time, pickling fish in their own waste.

Yes, you could survive smelling your own urine constantly – but would you want to?

It’s pretty cruel to subject any animal to the bare essentials of survival, especially when small sponge filter units can be had for less than $10.

We recommend the sponge filter seen below. 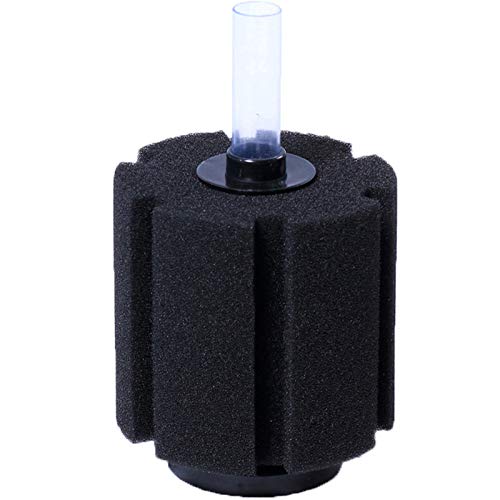 But What About those Bowls with Plants?

“Betta bowls” have risen in popularity in recent years. People are sold on the idea of fish eating the roots while the plants pull out waste and oxygenate the water, similar to an enclosed biosphere.

While attractive, the idea is, unfortunately, entirely flawed and is purely a sales gimmick.

While they’ll happily eat flakes and pellets, they aren’t plant eaters. They may nibble on plant roots in an exploratory fashion; fish don’t have hands, after all. But they aren’t getting any nutrition from roots.

On the other hand, the plants do get a fair amount out of the exchange.

Betta bowl plants include bamboo species, spider lilies, and other plants whose roots can withstand total immersion. The constant water plus the heady flow of organics from fish waste and your food additions makes for excellent fertilizer.

Nearly all plants release oxygen from their stomata, which are tiny orifices located on the leaves and stems of plants. Not on the roots. In fact, plant roots are actually consumers of oxygen.

Plants uptake oxygen through the roots for metabolic purposes; terrestrial plants decrease the amount of oxygen in the water for your Betta.

Sort of! Anyone who watches a Betta for more than a few minutes will see them take a gasp of fresh air from the surface.

Thanks to their labyrinth organ, they can use atmospheric air to supplement the oxygen they obtain from the water.

This evolutionary feature allow Bettas and their relatives (gouramis and paradise fish) to thrive in stagnant, low-oxygen environments like slow flowing creeks, rice paddies, and the shallows of steamy, sluggish tropical rivers.

These environments are also ideal for the insect larvae they love to eat! But just because they can tolerate polluted, stale water doesn’t mean you should give that to them.

Betta appreciate filtration and 0ppm ammonia and nitrite, same as any other fish. In nature, the sheer volume of any body of water plus biological breakdown via plants and microorganisms helps minimize pollution.

Even a neglected rice paddy will test better for ammonia than your Betta bowl.

Okay, But I See Bettas in Fish Bowls Even at the Pet Stores!

Cramped for space as pet stores are, it makes sense for them to stock a wall with bowls. Betta bowls are easy to clean, inexpensive to stock, and are a great way to keep groups of males close yet separate.

As you already know, bettas are incredibly aggressive towards each other.

If you ever find wild bettas, of which there are several different species, you can keep multiple males in tanks large enough to give them space to flee.

Store bought Bettas are the descendents of Thai Siamese Fighting Fish, which have been bred for centuries for color, showy fins like a matador’s cape…and absolute aggression.

So bowls do make sense since they’d rip each other apart in an aquarium and they have their labyrinth organs to take in fresh air as needed.

From there, it’s an easy step to sell them to people looking for a cheap, showy fish that seemingly doesn’t need a filter…or aquarium, one might think.

How Much Space Should I Give a Betta?

Bigger is always better when trying to decide how much space to give any fish.

I always tell people to get the largest tank they can afford and have space for. The larger the tank, the more stability the environment affords.

But if you really want a hard minimum, I wouldn’t but a tank (or bowl) below 5 gallons in size. 10 is better, of course.

And don’t forget a filter; even a simple sponge filter is better than nothing.

Don’t keep animals just to give them the bare bones basics.

Give them an enriching environment. Peaceful tankmates like neon tetras and platies add stimulation. Floating plants add shade and security as well as anchors for bubble nests. Submerged plants give them perches to rest on and places to explore. Live and frozen food like bloodworms and brine shrimp add variety and also promote better color. A filter ensures optimal water quality.

And all of these things make your Betta aquarium even more fun for you to watch! Everyone wins.

Do Betta fish need a filter? The answer is a resounding “Yes!”

The type of filter depends on your tank or bowl size as well as the number of inhabitants and how often you feed. Some of the most incredible Betta aquariums I’ve seen are actually “filter-less!”

They use established jungles of aquatic plants to provide all filtration; and unlike spider lilies, they do a good job of it! I’d look into these if you’re interested in a true “biodome” sort of aquarium.

While more challenging, it’s an achievement that will have your Bettas in glowing health!