The Marine Betta or Comet is a fish that nearly anyone would call beautiful. Showy, peaceful, hardy, and easy to breed in captivity, it’s surprising everyone doesn’t already have one. Unfortunately, they do offer a few challenges, particularly if wild-caught. But they are still a fantastic fish to try keeping, so long as their tank mates aren’t bite-sized!

What are Marine Bettas?

One look at a Marine Betta and it’s easy to see how it earned both of its common names. With their long, flowing fins and glossy scales, they really do look like black freshwater Bettas, just scaled up by a lot. Considering Marine Bettas can reach 8 inches they are quite a bit larger, but not so large that they will outgrow a medium-sized tank.

They are also known as Comets due to both their flowing fins (like the Comet Goldfish) and their starry night pattern. Whichever name you choose, it refers to Calloplesiops altivelis, a member of the family Plesiopidae. These fish are closely related to Groupers/Basslets (Serranidae) and Fairy Basslets (Grammatidae).

And like all of these fish, Marine Bettas are predators. In the wild they use the cover of night to leave their caves. Their bold black and white patterns become cryptic under the shifting silver tones of moonlight and shadows.

They then sneak up on and trap small fish and shrimp in and around coral rubble. The Marine Betta uses a unique sideways approach to its prey, flaring its fins out and attempting to herd it towards its mouth.

Those fins also provide a means of defense against predators as Marine Bettas aren’t especially large fish. When they flee into a nearby hiding place the Comet allows its tail fin to jut out “menacingly.” See the eyespot on the rear of its dorsal fin? Combined with the elongated tail fin, it mimics the head of a Moray Eel, which are sharp toothed cave dwellers that are highly aggressive!

Marine Bettas are stunningly beautiful fish. A beginning aquarist might take one look at it and assume it’s going to be difficult to care for. In fact, they are quite rugged and make great beginner fish for aquarists looking for something larger.

Feeding is the only real challenge in keeping them. But so long as you can get your Marine Bettas established and eating, you might even see them breed!

These pocket predators are both gorgeous and disease resistant. They have a few quirks but nothing that a well informed beginner can’t handle.

Aquarium size is important to keeping Marine Bettas. Even when bought as small, captive bred 2 inch fish, they will eventually reach their full adult length of 7-8 inches. They need caves built from live rock, which takes up space.

And if you intend on keeping several to breed them, even more space is needed. Breeding is done best by raising groups of youngsters and allowing them to form a harem.

55 gallons is the minimum aquarium size for a single Marine Betta. If you want to try keeping a pair, then 75 gallons is a better fit. They can be kept in a harem situation in aquariums 125 gallons or more in size (1 male to several females) as adults but allowed to grow out in smaller tanks when younger.

Once established and feeding, Marine Bettas are extraordinarily hardy fish. Even wild caught Comets settle in nicely once you get them eating. They thrive in standard tropical marine temperatures (72-82℉) and salinity (1.020-1.025). The pH should be between 8.1-8.4, which should be simple given the crushed coral substrate used in most aquariums.

Marine Bettas are cave dwellers and don’t care much for strong currents. If your filter outflow is rather strong, it’s better to use a spray bar to diffuse the flow or ensure that the decorations provide plenty of shelter against it.

Marine Bettas are also extremely disease resistant. There are plenty of cases of entire tanks coming down with Marine Ich (Cryptocaryon irritans) – except for the Marine Betta. They may have a genetic resistance or antiparasitic agent in their slime coat. Regardless, they very rarely get sick.

If you intend on trying to breed your Marine Bettas (see below) warmer temperatures are the way to go. Most aquarists report success in the 78-80℉ range.

Proper aquascaping is very important to Marine Betta well being. They are very odd fish personality-wise. They are shy cavity dwellers but also have the innate curiosity of predators. They will eye you and other fish warily from the mouth of their cave rather than dash all the way inside. Yet they will tend to slowly grab food that wafts by instead of competing alongside other fish. 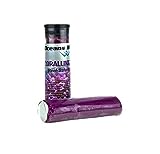 Live rock rubble stacked into spacious caves is what you want to provide for them. As you aquascape you’ll want to affix each chunk together with glue or epoxy. Sudden collapses of live rock structure can be fatal to fish and shrimp living within. And Marine Bettas aren’t small fish. If they panic and dash against a supporting rock, it can cause your structure to shift and collapse.

You’ll likely need to provide several caves, especially if you have other cave dwelling fish like Grammas or are starting a harem of Marine Bettas. While they aren’t viciously territorial they don’t always get along with each other.

You do need to be cautious when choosing tank mates for Marine Bettas. They are peaceful and even shy towards similar sized fish. But they are also predators and will size up and try to eat anything small enough.

Pushy fish like larger Clownfish (Maroon, Clarkii, etc), larger Damselfish like the Domino Damselfish (Dascyllus trimaculatus), Triggerfish, and many of the larger Saltwater Angelfish are poor choices. The Marine Betta won’t stand a chance and may even be too intimidated to eat properly.

However, small peaceful fish are also problematic. Avoid thin fish like Firefish and Gobies, as well as the smaller species of Cardinalfish and young Chrysiptera Damselfish (adults may work, as can Chromis Damsels).

So long as you provide plenty of hiding spaces for all, Engineer Gobies are beautiful fish that have very similar habits to Marine Bettas. Other peaceful predators like Lionfish, smaller Hawkfish, and some wrasses like the Harlequin Tuskfish (Choerodon fasciatus) are also great tank mates.

Give plenty of thought on how your community will interact when it’s time to eat, however. Marine Bettas prefer not to leave the safety of their cave during the day and will generally snap at food that floats by. Aggressive feeders may prevent them from eating properly.

Feeding is the one real problem potential Marine Betta keepers have because these fish are definitely predatory. They react strongly to the movement of prey and wild-caught Marine Bettas have difficulty being weaned onto dead items.

Captive-bred Marine Bettas are much more common today and they may even be eating standard pellets and flakes. But even Comets born in captivity prefer fresh and frozen foods like brine shrimp, live tubifex, chopped seafood, and feeder fish.

Make sure to go with a carnivore pellet if attempting to feed your Marine Betta prepared foods. They tend to use meat-rich formulas that are more likely to smell and taste right. Also they sink, which helps get them to the caves faster where your Comet is lurking.

Weaning wild-caught Marine Bettas onto dead food is a challenge but it can be done. The most common approach is to keep the fish in a quarantine tank for a few weeks so it’s not having to compete with established fish. You then place a small dead fish or other chunk of meat onto some feeding tongs.

While waving it enticingly, it can be offered directly to the Marine Betta at the mouth of its cave. Eventually (hopefully), the Marine Betta will learn that dead prey is acceptable, removing the need to use feeding tongs. And from there, you can intermix pellets and possibly even flakes into their diet.

Lastly, remember that these are rather sedentary predators. They tend to get one good meal a few times a week in the wild. Feeding 2-4x a week is all that’s needed once they are fully grown or one light meal a day. That said, extra food is a great way to condition them for spawning!

Marine Bettas are an excellent fish to try spawning because they are extremely hardy once established, not very difficult to spawn, and fetch a very high price in the hobby. You can make back what you paid for your Bettas several times over with a single spawning.

Marine Bettas, like many saltwater fish, are capable of changing sex as the environment and social structure demands (the proper term is sequential hermaphroditism). If you decide to buy four Marine Bettas and three end up being males, the largest and most dominant fish will remain a male. The others will gradually change sex over time and become females!

Since males tend to be the more aggressive sex its better to choose females whenever possible. That way, a single male will eventually manifest from their group dynamics. Choosing a small group of immature (2-3 inch) Marine Bettas and raising them together is even safer as there will be plenty of space in a larger tank for them to figure out who will be what.

Sexing Marine Bettas isn’t exactly straightforward but it’s not impossible, either. The males are always larger compared to females of the same age. And the gonopodium (breeding organ) of the male is pointed when visible while it’s obviously rounder in females. This can be hard to see but one way to make the gonopodium more visible is to give your fish a heavy feed. Their bloated belly may push the gonopodium out slightly.

As you’d expect, Marine Bettas are cavity spawners. The pair will lay 500-1000 yellow eggs along the walls of their chosen cave, sometimes even upside-down on the ceiling. Once laid, the male guards them vigorously until the fry hatch within 2 weeks of spawning.

Marine Betta fry are small enough that once they absorb their yolk sac they will need rotifers and other microscopic foods for the first few days. But by the end of the first week, they will have grown large enough to accept live brine shrimp nauplii.

At this stage, it’s simply a matter of keeping the water clean and well filtered as they eat and grow. They have a striking pattern when young. Except for a large white to grey spot on their flank, they look like miniature adults. And as they grow, the white spot fills in with their adult colors.

Like their parents they are tiny predators. But you have a much better chance of raising them on flakes and other prepared foods as babies!