There is nothing more exciting than finally going to the local fish store with the intentions of stocking your dream aquarium. Lets be honest…I know you have imagined it a million times – we all have.

Fortunately, there is an incredible amount of variety within the aquatic world to choose from. Many colorful freshwater fish are compatible with one another as tank mates, allowing hobbyists to create a rainbow of colors within their aquariums.

This list highlights 15 of the most colorful freshwater fish for all experience levels, tank sizes, and aquarium types! 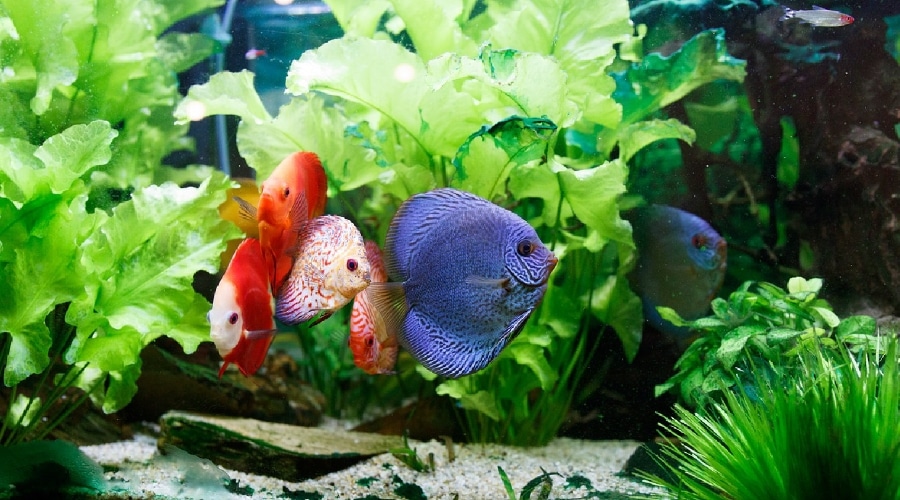 Without further ado, here are 15 colorful freshwater fish that everyone should keep at least once: 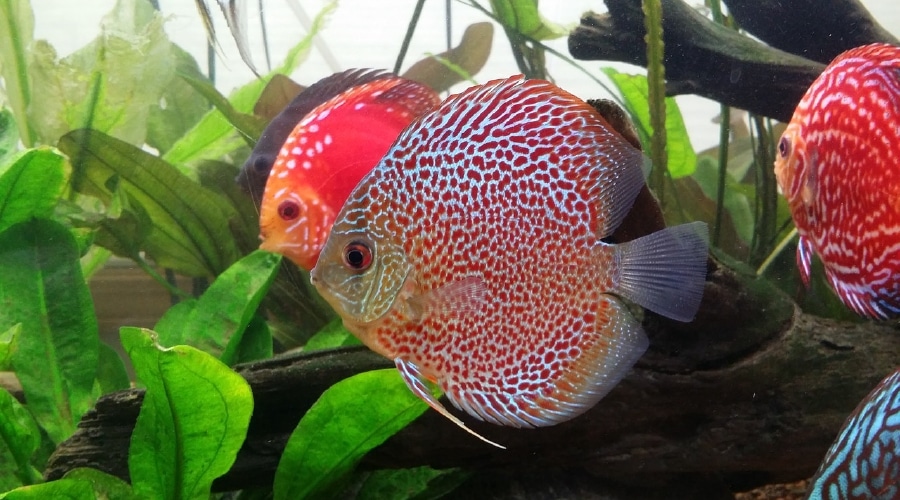 Discus are considered the “holy grail” for a ton of freshwater fish keepers. These amazingly colorful freshwater fish come in an array of patterns, and are identifiable by their unique red irises.

That being said, the discus is a high maintenance fish due to its requirement for extremely clean water with a specific pH level of 5-7. Discus prefer aquariums with dense foliage and natural hiding spots to mimic the environment of their wild counterparts. They eat live foods, including brine shrimp and worms. The brilliant striped pattern and striking colors of the Discus make it a popular choice for freshwater aquariums.

The German Blue Ram stands out for the fluorescent blue dots that cover its otherwise yellow-orange body, as well as its’ unique spiked dorsal fun. Rams are also highly compatible with many other species of fish due to their social and peaceful nature. Rams can be kept as individuals, in small schools, or just with a pair, as these fish tend to choose only one mate. They are also a much lower maintenance fish due to their temperament, and simply require a freshwater tank (preferably with soft water) with “caves” or other hiding spots, especially in the case of a breeding pair who will need a location to lay eggs.

Check out our German Blue Ram care guide for more information on this species. 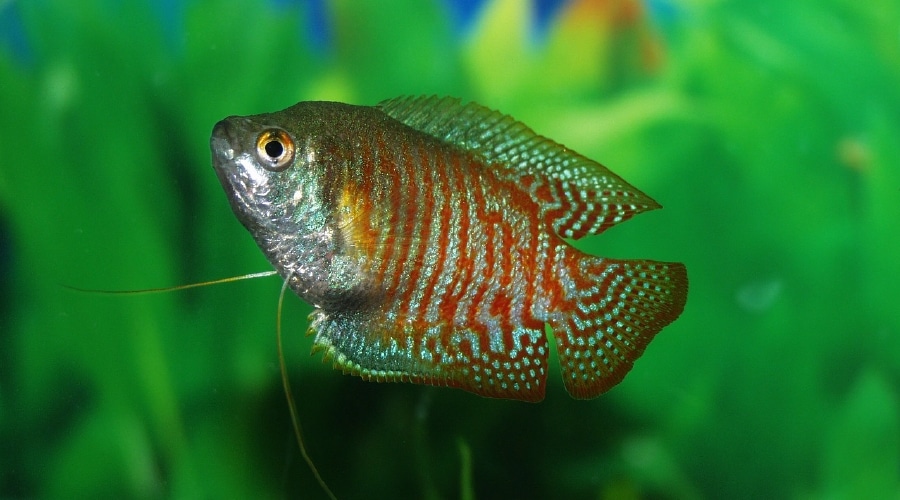 There are many varieties of gourami that may catch the eye of aquarists seeking highly colorful fish. The Flame dwarf gourami features deep blue coloration that transitions into a bright flame red towards the tail. The neon blue dwarf gourami is just that- striking neon blue with spots of red-orange along its scales.

There are many other variants of the gourami which differ by shape and size, though females tend to be paler in color across all variants. The gourami is a peaceful fish who requires dense foliage to swim through, and can be kept as individuals or a mating pair. Mates will use the foliage in the tank to help create the bubblenests as cover for their eggs. 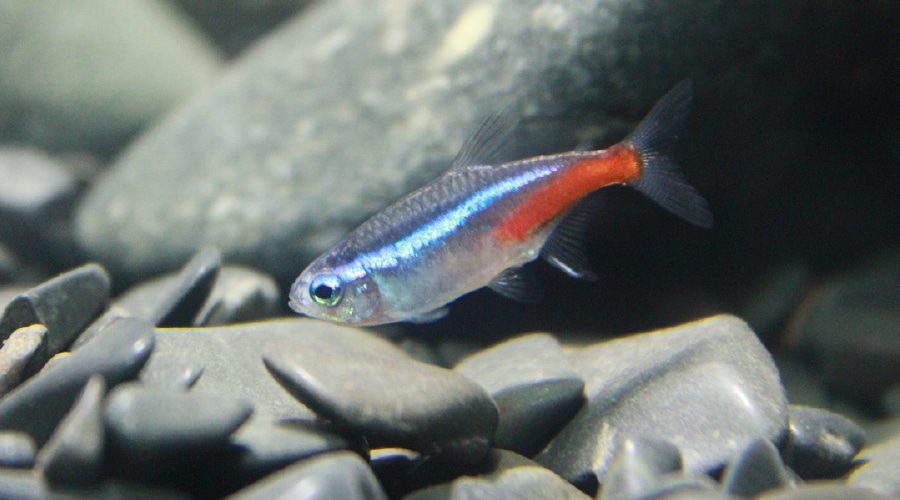 These small fish are happiest when kept in schools of 5-6 or more, and have plenty of features within the tank to use as hiding spots. The diamond neon tetra specifically has a blue stripe that runs down the side of its body interrupting the overall reddish hue, in addition to a metallic diamond shape in the region of the dorsal fin which develops as the fish matures.

Tetras can be a bit skittish, but when provided with a small school and sufficient hiding spots they will feel secure enough to make their presence known and explore the tank. 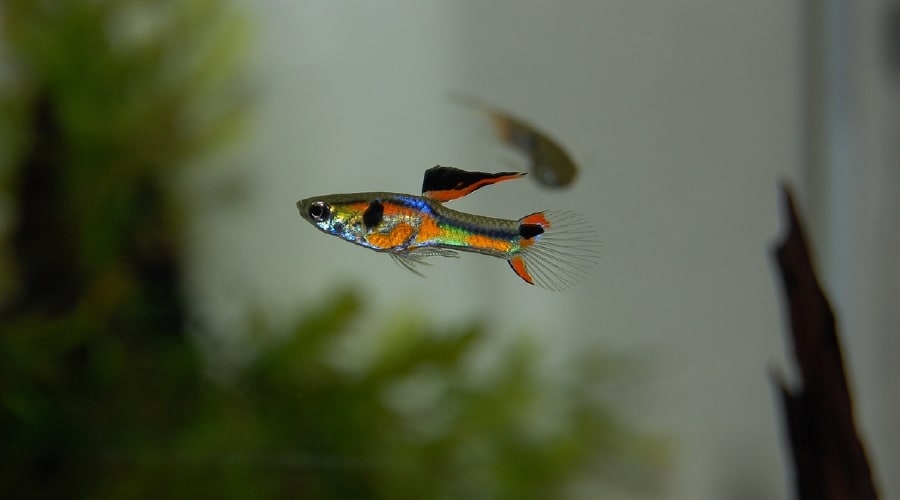 Endlers require harder water than some other freshwater species, which must be considered when selecting tank mates. These fish stay quite small, the males only reaching an adult size of approximately 1”. Though they are not schooling fish, they are friendly and can be housed in the same tank amicably.

The killifish is an active schooling fish who is known for its variety of neon colors and its tendency to jump. Killifish are best kept in small schools with only one male and several females, as the males can become aggressive towards each other. Some Killifish species are endangered and cannot be kept by hobbyists, but there are more common varieties available for sale. Killifish, along with most of the other fish on this list, require an abundance of hiding spots and adequate foliage to feel secure.

This rainbowfish species is unique in its coloration, which starts as a metallic silver/grey at the head and becomes an increasingly bright yellow/orange towards the tail. This color is encouraged by a specified diet and the proper maintenance of the tank water’s hardness and pH.

Rainbowfish grow to an adult size of 3-4”, and are happiest when kept in groups of 6-8. The Boeseman’s rainbowfish also require dense foliage within the tank in addition to an area for open swimming, in order to recreate the conditions of their natural habitat. 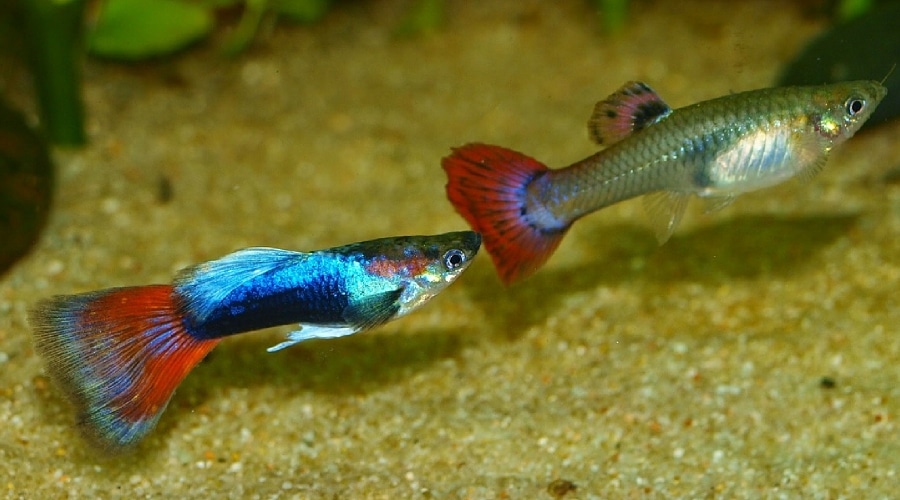 Fantail guppies are a classic choice for hobbyists looking to add some color to their tanks. They get their name from their dorsal fin which is large in comparison to its body, and fans out broadly.

Fantail guppies can vary in color from neon yellow to lime green to teal, all of which are often interspersed with black or silver – making the colors even more striking. Guppies stay relatively small, at approximately 2.5”, and are most at home in small schools. They are friendly fish which do well when housed with other schooling fish such as tetras, gouramis, or platies.

These fish are unique for their coloration, which changes in males during spawning. The overall color of the fish is silver or white, but during spawning males turn bright cherry red, hence their name.

Cherry barbs are easygoing fish who maintain require room to swim openly, as well as vegetation in which to hide. They may be skittish individually but are comfortable in small schools.

The male of this species is the one who makes the list, with his stunning cerulean blue scales. The female counterpart to the Electric Blue hap is actually a gray-silver tone. The hap is one of many species of cichlid with a slightly forked tail.

Blue haps are schooling fish who are best kept in groups of 3-6 females and 1 male, or in breeding pairs. These cichlids grow to about 6” in length when fully mature, and their tank environment should mirror that of their natural habitat, with large rocks and hearty plants – but no driftwood. These stunning fish stand out in any aquarium.

The Rubin Red Peacock cichlid is appropriately named; its scales form a patchwork of bright red to deep blue to violet scales peppered with silver. This popular cichlid variant is much like the Electric Blue hap in the sexual dimorphism of its scale colors, with the females having mottled gray or brown scales. The Peacock cichlid follows the same habitat and pairing requirements as its Electric blue counterparts.

This is a peculiar fish that stands out from the other cichlid varieties in a big way. The Flowerhorn cichlid is so named for the large mass on its forehead, present in both males and females. Its bulky body features a variegated pattern with extreme color variation based on breeding and hybridization. Additionally, the colors of an individual flowerhorn can change until maturity is reached. The flowerhorn cichlid does require plenty of space, and is known for being territorial.

Oscars are another variety of cichlid, with their own array of color, shape, and size variations. In addition to their remarkable pigmentation, Oscars are also renowned for their intelligence among other fish species. Some Oscars have been said to play and interact with their owners, including showing signs of “excitement” when their owner enters the room.

One drawback of the Oscar fish is the cichlid aggression that tends to arise from these fish. Despite this, it is possible to house Oscars with tank mates, so long as they are introduced and housed responsibly and with discretion in order to avoid the Oscars showing aggression.

The Duboisi is one of many varieties of the Tropheus cichlids, popular for their high level of activity and individual personalities. These cichlids undergo a transformation in color and pattern as they age, making them a distinctive choice for color-seekers. Juvenile duboisis are black with blue-white spots, and as the fish age they lose their spots and gain a bluish tinted head and a yellowish-white band around their middle. They are best kept in species-specific tanks in schools of approximately 8-10 fish, due to their strong social structure and aggressive nature.

The name of this fish speaks for itself! The Zebra danio is characterized by horizontal stripes that run the length of their body, and may be silver, gold, or white in color, contrasted by black, deep indigo, or even dark green stripes. These fish provide excellent visual divergence from some of the other fish listed here, and are perfect to include with other colorful freshwater fish due to their peaceful nature. Danios stay small even into adulthood, maintaining a length of about 2”. Danios are highly social and should only ever be kept in small schools.

Here are a few more colorful freshwater fish for those who don’t like the options on our detailed list above:

As you can see, there are tons of colorful freshwater fish available for purchase at most local fish stores. In addition, most of the fish on our list don’t require specialized care and do great in community aquariums.

Make sure to keep up with basic water changes and feedings and your freshwater aquarium should be healthy, lively, and colorful for years to come!