Fish diseases are something we rarely want to think about – we love our pets. But once the inevitable happens, it helps to have the right knowledge at our fingertips.

Dropsy disease is something most aquarists have to deal with but unfortunately, few succeed at.

There is a lot of misinformation out there on both the causes and the cures. So I think it’s time we discussed what exactly Dropsy disease is and how to deal with it.

What is Dropsy Disease?

Interestingly enough, Dropsy actually gets its name from the nearly identical human condition. As in fish, human Dropsy disease is caused by opportunistic Aeromonas bacteria.

Dropsy in humans is less a disease and more a symptom of bacterial infection. These bacteria are always present, not only in us, but in the world around us. Thankfully, our immune system typically keeps them well in check. However people suffering from severe wounds and immunocompromised individuals can develop the disease known as Dropsy.

Dropsy results in swelling of the belly due to fluid accumulating in the abdomen. The word is an Middle English term, formerly “dropesie.,” that refers to the swollen belly. When it advances it can become flesh-eating bacteria or necrosis, leading to major surgery or death.

Thankfully, we have a whole suite of modern medicines to identify Dropsy before it becomes fatal in humans. However the disease is just as debilitating to aquarium fish and deserves our attention!

Here are some of the common symptoms of Dropsy:

This is the most common symptom of Dropsy disease and one of the most worrying. Because by this point the disease has already progressed substantially and needs treatment ASAP.

While your fish will be obviously much fatter than if they’d simply had a good meal, the swelling belly can cause beginners to diagnose their fish as pregnant or swollen with eggs. Knowing the seuxal habits and way to tell males from females can keep you from misdiagnosing this!

As fluid gathers in the abdominal cavity and surrounding tissues the fish will literally swell up as if they’d eaten a marble. The spine may also curve as the ball of fluid forces the belly outward. Fish typically have trouble swimming and maintaining buoyancy.

As fluid buildup continues the pressure becomes so great the skin of the fish grows taut. And as the skin tightens the scales begin to lift up from their normally flat resting position. Dropsy disease can cause fish to take on an alarming pinecone-like appearance.

Popeye is a related disease also caused by Aeromonas bacteria but more localized. If the bacteria get within or near the eyes, fluid buildup can cause them to literally bulge out.

While the above three are the most common ways to diagnose Dropsy disease additional symptoms include:

While we know that Dropsy Disease is the result of opportunistic Aeromonas bacteria that doesn’t explain everything. Aeromonas are everywhere and typically the immune system of fish keeps them in check.

Aeromonas go from sideliners to deadly threats when that immune response is hampered somehow. Perhaps a fish gets an open wound from an aggressive tank mate. Or, much more often, the aquarist doesn’t keep up with their water maintenance.

Dropsy is not exactly contagious since the bacteria are constantly around. However the presence of Dropsy indicates that your water quality may be poor, opening up other fish to infection.

Poor water quality is the #1 cause of Dropsy Disease, which is why Bettas, Goldfish, and other fish typically kept in small bowls get it so often. How that manifests ranges from moderate to high levels of ammonia, which is toxic and can kill fish outright, to a constant brew of nitrite and nitrate.

Both of these agents, especially nitrate, are less toxic to aquarium fish. However Nitrate is particularly insidious because most beginner aquariums don’t have enough denitrifying bacteria to break down nitrate in the system. Nor do they have live plants to take up nitrate as fertilizer.

Instead, nitrate has to be removed by water changes – and if the aquarist doesn’t keep up with them, nitrate is a continuous low level stressor on the tank’s inhabitants. It will only take another stressor or two – a temperature shock, a wound, pH swing, contaminated food, etc, to allow Aeromonas to get a foothold.

The lack of water changes, nitrogenous waste buildup, and bacterial chow like uneaten fish food (swimming in rotting food is never good) make a nice home for Aeromonas to lurk, waiting for a fish to become stressed or immunocompromised somehow.

How to Treat Dropsy Disease

Once your fish is showing symptoms know that you need to begin treatment ASAP. Dropsy is typically fatal within 1-2 weeks, though the earlier you catch it, the better your chances of reversing it. Once the scales or eyes begin sticking out, you may only have days left to act.

You’ll need to treat both the affected fish as well as the entire tank because Dropsy usually indicates a broader environmental issue like poor water quality. Any by “treat the tank,” I mean start with water quality testing and heavy water changes to address these issues. Prevention is by far the best medicine when dealing with Dropsy disease because treatment isn’t guaranteed to save your fish.

As for your sick fish, you’re better off moving them to a quarantine tank for treatment. Antibacterial agents are often broad spectrum and will kill off good bacteria with the bad. If you dose the entire tank you risk resetting your biological filtration capacity, leading to New Tank Syndrome.

Fortunately, not all aquarium antibacterial remedies are harmful to filter bacteria.

While it causes the water to foam briefly it smells great and is one of the best remedies for Dropsy and other bacterial diseases around. 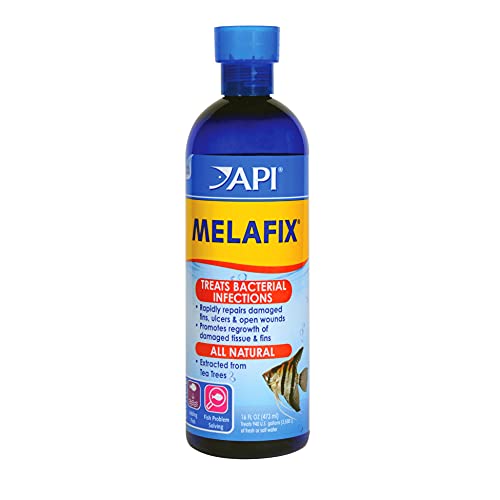 Dropsy isn’t contagious so if you only have a single aquarium you can keep your sick fish with the others. However it’s harder to provide targeted treatment when dosing the entire aquarium rather than a small quarantine tank. And even medicines can be stressful to fish if not needed.

Give Your Fish a Salt Dip

Next, you need a steady supply of aquarium salt. Even freshwater environments have low doses of salt, which serves many functions.

Salt helps balance fluid and mineral salt exchange through the gills, stimulates slime production in both the gills and exterior slime coat, and boosts immunity. Salt is also stressful for many microbes and parasites.

To give your fish a salt dip, prepare a separate bucket of aquarium water and four teaspoons of aquarium salt per gallon.

Since the bath will last 15-30 minutes you may want to add more water to ensure it remains warm, depending on your climate.

Carefully net your Dropsy-infected fish and place it within the bucket. Observe the fish as often and as long as possible. You’ll want to watch for any signs of severe stress, like convulsions or shock. Slight shivers are to be expected as the sudden exposure to higher salt concentrations can be irritating to fish mucus membranes.

Once the salt dip is finished, you can return the fish to either the home or quarantine tank. However you should maintain a low level of salt; 1 tablespoon per 5 gallons will provide a background tonic that will aid healing.

Lastly, we should ensure that the tank is warm enough. While bacterial activity accelerates with temperature so too do the immune, respiratory, and digestive functions of fish. Unlike mammals, fish are cold-blooded. We can help boost their life processes simply by turning up the heat when they’re feeling sick!

Temperatures of 78-80F are perfect if your tank typically sits at around 75F. And if your fish are already at 80F, boost this to 84 (so long as your fish are equatorial species that aren’t stressed by these temperatures, like Tetras and Barbs).

Preventing Dropsy Disease in the Future

Remember that Dropsy is a condition caused by rot. And all rot is caused by germs and a lack of cleanliness. We can address cleanliness best by keeping up with water changes so agents like nitrite and nitrate can’t build up to toxic levels.

And when feeding your fish, take care to minimize the amount of leftover food that can rot and lead to problems like ammonia, bacterial growth, and Dropsy.

Lastly, make sure to check on your fish daily and scan them for early warning signs like clamped fins, loss of appetite, or open wounds. Any one of these can help you diagnose a disease more quickly, easing treatment and possibly saving your fish’s life!

Dropsy disease is one of the more serious conditions aquarists have to deal with because once you start seeing the obvious symptoms the disease is already serious. Fortunately, if you respond to it quickly and with the knowledge you’ve obtained here, you have a shot at saving your treasured pets.

Just remember that Dropsy is an opportunistic infection that’s usually a sign of an underlying cause, like poor water quality. So make adjustments to your future maintenance regimen even if you do cure your fish!