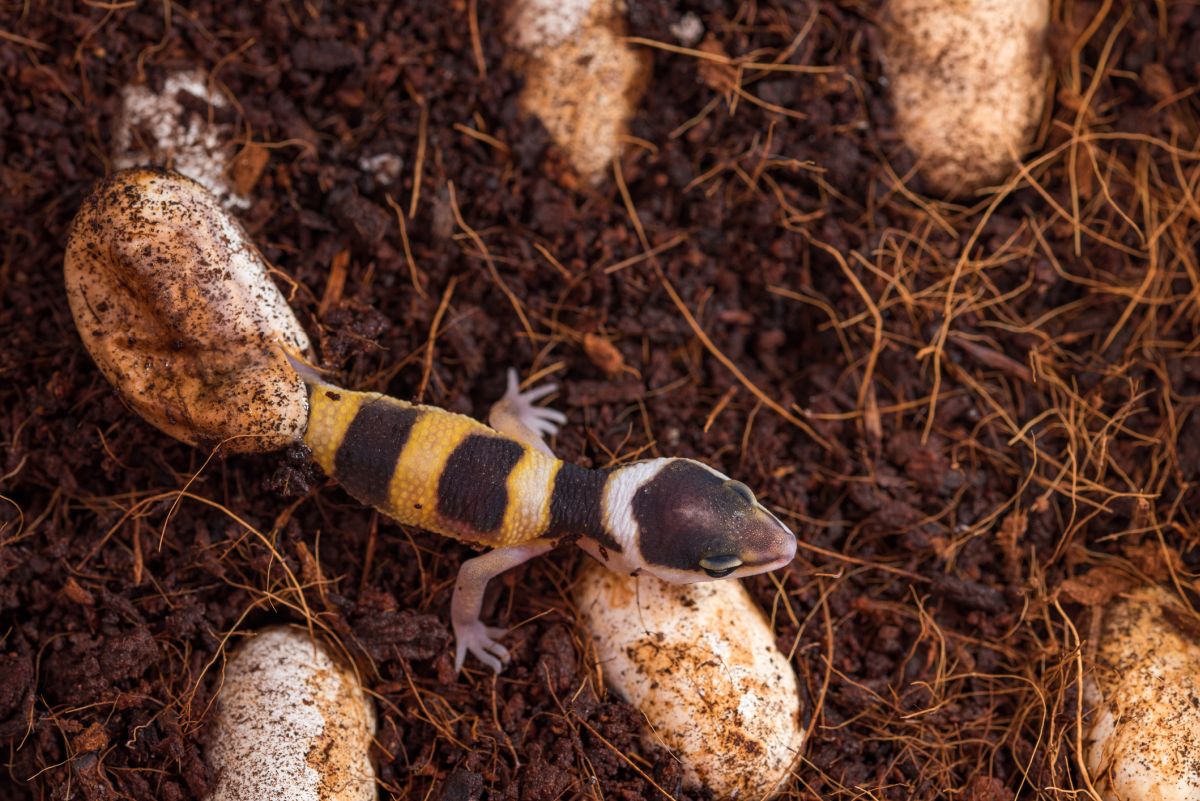 While all of us know that lizards give birth, the exact method might be uncertain. After all, some reptiles don’t lay eggs at all. Do lizards lay eggs?

While most lizards do lay eggs there are a few notable exceptions. Lizard reproduction also covers some fascinating topics, including cloning themselves without a mate.

Most lizards are oviparous, meaning that they lay eggs. So are most fish, birds, amphibians, and reptiles. Even a few mammals (the platypus and other monotremes) lay eggs also.

Egg laying is a reproductive strategy that lizards use to allow the embryo to develop outside of the mother. The baby uses less resources from the body this way but is in danger of being eaten for a longer period.

Eggs weigh the mother down for less time as well, enabling her to remain free to mate more often. Egg laying is a strategy used where larger numbers of weaker offspring are created.

Few lizards provide parental care for their eggs once they are laid. Lace monitors (Varanus varius) will return to their nests around hatching time to help the babies break free.

But active defense of the eggs is very rare. Even the giant Komodo dragons (Varanus komodoensis) will lay their eggs and then leave them.

Do Lizards Need a Male to Lay Eggs?

More than a few female lizards give birth without a male. An asexual reproduction mode called parthenogenesis. Some sharks, fish, invertebrates, plants, and insects also reproduce this way.

The advantage of parthenogenesis is that a mother lizard creates clones of herself if there are no partners around. But the downside is that her babies have no genetic diversity.

For example, if a disease the mother was susceptible to were to sweep through an area, the clone babies would all be as likely to die. Whereas baby lizards born of a mate might have a genetic resistance that saves them.

Komodo dragons have been known to lay eggs without a mate. Sungai is an adult female at the London Zoo. She laid eggs in 2005 despite being away from a male for more than 2 years.

At first, researchers thought she had stored sperm inside of her. Several animals do this, even guppy fish. But a genetic analysis of the babies showed that they were clones of their mother.

How Many Eggs Do Lizards Lay?

The exact number of eggs laid by a lizard depends on the species. Smaller lizards like the green anole (Anolis carolinensis) lay 1-2 eggs at a time. But they will also lay an additional egg every 2 weeks during the breeding season. Finishing at around 10-12 eggs.

Larger lizards have larger ovaries and the eggs are smaller compared to the mother lizard. Therefore, larger lizards will lay more eggs. Monitor lizards lay 8-20 eggs at a time.

When a female small lizard is carrying eggs you often see them through the thin skin of her belly. You see this with pregnant geckos, grass lizards, and anoles, allowing you to count the number of eggs before they have been laid.

Do All Lizards Lay Eggs?

Most lizards lay eggs but not all. About 20% of all lizard species are viviparous. Like humans and most mammals, these lizards give birth to live young instead of an egg.

Live birth is a reproductive method where the mother invests in a smaller number of stronger babies for a longer period. Versus egg-laying, where the babies are weaker but more numerous. An egg-laying lizard will have more babies over a similar time period compared to a viviparous lizard.

Even a few popular pet lizards give live birth. Blue tongued skinks (Tiliqua sp.) are well known for having live babies. After mating the 10 to 15 babies develop inside of the mother for 3 to 5 months before being born.

The Mexican alligator lizard (Abronia graminea) is a popular arboreal pet lizard. They are also one of the few lizard species known to have live birth.

Their gestation period is also very long for a lizard. The mother holds her 1-12 babies inside of her for 6 to 8 months before giving birth. Almost as long as a human mother.

Do Lizards Lay Eggs in Water?

Lizard reproduction is an interesting subject. While most lizards lay eggs, more than a few give live birth. And several species create eggs without the help of a male. Lizards use several strategies to preserve their young, shaped over millions of years of evolution.