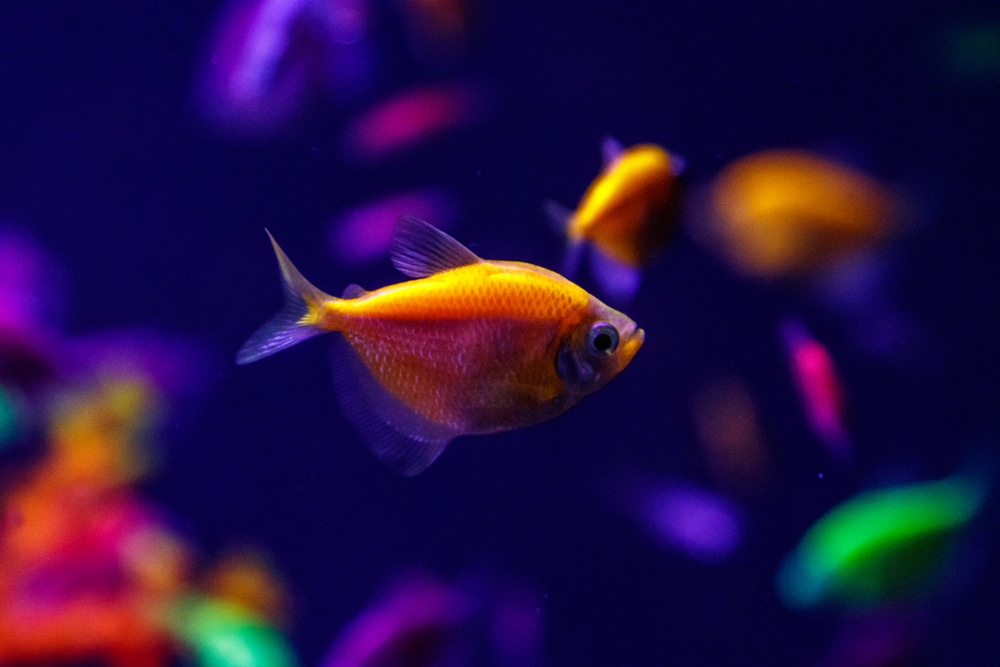 If you’ve spent time browsing aquarium stores anytime in the past few years you’ve probably come across tanks of fish too vibrant looking to be real. Glofish are taking the aquarium world by storm – but what are GloFish they and how are Glofish made?

Yes! Rumors that Glofish are injected or soaked in dye persist, though. And these rumors are understandable because that’s something that’s still done in the hobby today.

If you’ve ever seen Painted Glassfish (Parambassis ranga) you’ll note that they usually come in a riot of neon colored stripes along their backs and tail. These fish are injected with dyes that fade over time but do impact their health.

Glofish, on the other hand, are born with their colors and can even pass them on to their offspring! The genetic based coloring also has no impact on their health and they can even breed successfully with each other and normal fish of their species.

Believe it or not Glofish weren’t originally meant for the trade. The first attempts to create them used Zebra Danios (Danio rerio) as the model organism. Researchers in Singapore were hoping to create fish that would fluoresce (glow) when water pollution was present.

However the first step in the process was perfecting the genetic transfer and visible glow. The scientists opted to insert green fluorescent proteins from marine jellyfish into the Zebra Danio genome.

And it worked! In fact, the resulting fish glowed under both normal and ultraviolet (black) lights. Other genes from corals and anemones carrying red, purple, and yellow proteins were eventually inserted, resulting in a riot of colors never before seen in Zebra Danios.

What Kind of Fish Are Glofish?

Currently there are four fish species that carry the Glofish genes and are widely available in the hobby: the Zebra Danio, Tiger Barb (Puntigrus tetrazona), Black Skirt Tetra (Gymnocorymbus ternetzi), and Rainbow Shark (Epalzeorhynchos frenatum). Each is bred and supplied to distributors around the world by Yorktown Technologies, L.P.

Other fish have been created in small numbers, including the Japanese Rice Fish (Oryzias latipes). Glowing Rice Fish were designed by the Taiwanese company Taikong Corporation and mostly available in East Asia.

A Globetta was just released in 2020 by Yorktown Technologies as well and will no doubt be one of the most popular Glofish in the hobby!

Is There a Difference Between Natural Colors vs Glofish?

Other than the fluorescent proteins they’re born with, Glofish are exactly the same as natural color morphs. They can be kept together, eat the same food, and will reproduce successfully. Given their popularity many manufacturers now offer specialty foods and ecosystems designed to show their glow to best effect!

How about keeping Glofish with other fish? In most cases other fish don’t seem to care one way or another. However some studies have shown that female Zebra Danios actually prefer glowing males to normal specimens!

How the young turn out depends entirely on the randomness of genetics. Breeding Glofish together will result in Glofish young. Breeding Glofish with normal color morphs can result either in a mixture of both Glofish and normal morphs or fish that look like a cross. Hybrid Zebra Glofish tend to have bolder stripes than their Glofish parents but still fluoresce.

At first courts in the US and other countries were reluctant to allow Glofish to enter the trade as it was a landmark case for transgenic designer organisms. Lawsuits formed and defendants argued that these fish with their tweaked genomes could escape and cause problems for local ecosystems.

Since tropical fish are unable to survive in the temperate climate of most of the United States the argument did not suffice. Also, Glofish are literally advertising their presence to potential predators and would become a quick meal in nature.

Since they are created in a painless manner that has no lasting impact on their health and don’t threaten the local environment, Glofish are a fine choice for aquarists looking for something especially colorful! All four are great community fish and will thrive for years in a mature, stable aquarium!