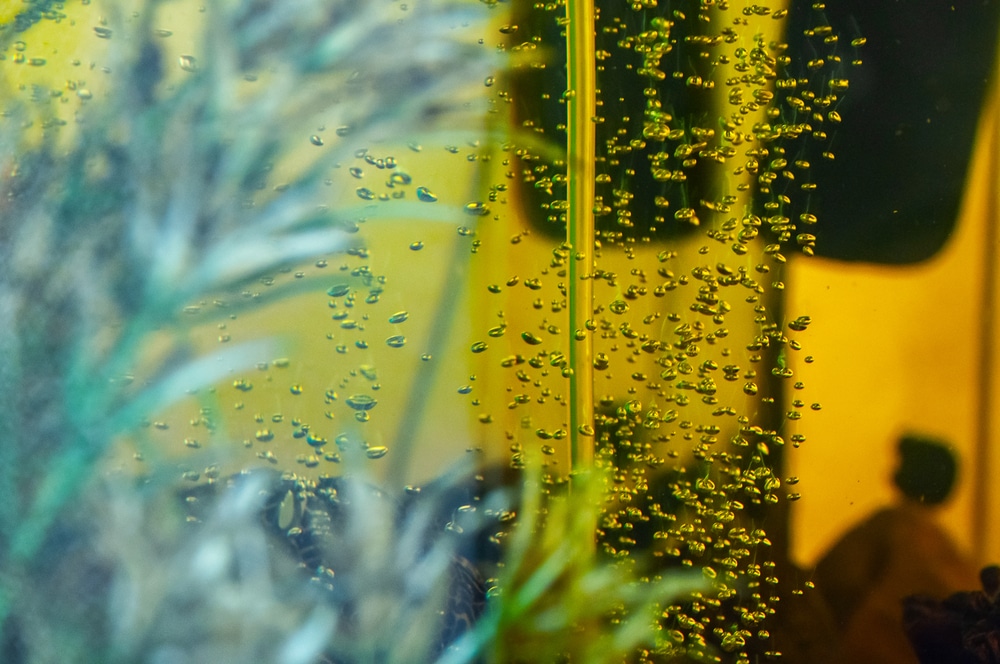 Aeration is not often thought about or discussed. While we all know air pumps and bubble wands are a big part of the hobby, few aquarists know precisely how they work and why they matter. It’s clear fish need “air,” but how much is enough and when do they need more?

Why is Aeration an Issue in Aquariums?

First, we need to clarify what we mean by “air” when we talk about aeration. Atmospheric air holds nitrogen, oxygen, argon, and many other gases. However, oxygen is the only one we’re concerned about here.

Since most fish can’t breathe air they rely on dissolved atmospheric oxygen for survival. However water only has around 5% of the amount of oxygen that an equal volume of air does.

This is why any aquarium store that knows what they’re doing will place more air than water in the bag when you buy a new fish. The extra air is what keeps your new fish alive until you get home. If the store instead fills it mostly or even completely with water, I’d recommend shopping at a new pet store.

When learning about aquarium aeration knowing how different water parameters affect dissolved oxygen is important. The three main parameters are temperature, salinity, and pH. All three affect how much oxygen is available for fish to intake.

As water warms the amount of dissolved oxygen it can hold decreases. The following data was taken from the Lake Stewards of Maine.org website:

A typical tropical fish aquarium sits at around 78℉ (25.6℃). Dissolved oxygen at its maximum is 8.2ppm; a 20% decrease despite all other parameters being identical! Raise the temperature to 84℉ (28.9℃), typical for Discus, Barbs, and other equatorial fish, and we get 7.7 ppm, a further 5% drop in oxygen capacity.

Salinity is a second major influence on dissolved oxygen. Saltwater as a rule holds 20% less oxygen than freshwater of the same temperature in ideal conditions. Near the tropics, oceanic waters can be as low in oxygen as 4.4ppm.

pH has the least influence on dissolved oxygen directly. However pH parameters lower than optimal (i.e. keeping livebearers in acidic conditions) negatively affects their respiration and therefore, their ability to extract oxygen.

There are three more impacts on oxygen that come into play both in nature and in aquariums.

Getting the water moving is one of the best ways to make the most of what oxygen is available. And this is exactly how aquarium aerators operate! Even many advanced level hobbyists are fooled into thinking that aeration stones are injecting oxygen directly into the water.

However this is not the case; the bubbles aren’t submerged long enough for much oxygen to be released. Instead, they are performing two tasks: agitating the surface of the tank and creating a circulating current.

The surface is where gas exchange happens: excess carbon dioxide released by your fish escapes into the air and fresh oxygen dissolves into the water. However in non-aerated tanks the surface zone often reaches equilibrium, which is the point where no additional gases can be exchanged because the water has reached its saturation point.

The lower levels may be depleted but the surface zone is acting like a lid for fresh gases. When this occurs you’ll start to see your fish spending most of their time swimming near the surface as they’re literally suffocating if they go much deeper.

You sometimes see the same thing happen in small, stagnant ponds in the summer. Fish start swimming near the surface because the pond has no flow to mix layers and the warm water can’t hold enough oxygen anywhere else.

Aerators (bubblers) disrupt this zone, mixing the water column enough that dissolved gas concentrations are equalized throughout the tank. Aerators also increase the area of this zone as the water’s surface is constantly rippling from bubbles popping, creating more area for gases to diffuse!

It’s also worth mentioning that “long” and “wide” style aquariums are better for gas exchange than “tall” models for this reason. A 20 gallon “long” is 30x12x12 in. while a 20 gallon “high” is 24x12x16 in. The “long” has a 25% greater surface area relative to the “tall! “And fanciful tall aquariums shaped like cylinders are the absolute worst since the surface is extremely small relative to the aquarium’s volume.

This one is simple: how many fish are in your aquarium? The more fish there are, the more oxygen they consume. And if you are keeping larger fish they consume significantly more than several small ones do; the one inch per gallon rule is a dangerous myth!

Aquarium plants (both true plants and marine macroalgae) are oxygen producers thanks to photosynthesis! This means they keep a flow of dissolved oxygen going that helps keep your tank saturated even if there isn’t sufficient oxygenation through aeration.

However, plants will rob you of oxygen on occasion. At night, plants and macroalgae switch to being oxygen consumers. They then release carbon dioxide, just like your fish. In nature there is so much water volume available that the switch is a negligible change.

Unfortunately, in the tighter confines of aquariums this can cause swings in both pH and dissolved oxygen that can stress or even kill sensitive animals. Therefore, even planted aquariss can’t fully ignore aeration unless the fish population is so low they won’t run out of oxygen at night.

Here are a few ways to increase the aeration in your aquarium:

For smaller aquariums up to 20 gallons in size aeration stones make the most sense. For the small amount of power they use they can create enough current for mixing and agitate the surface enough for proper gas exchange.

Today we have the classic long curtain-style bubble walls and wands, circular aeration pads, and an infinite variety of bubbling clam shells, castles, and shipwrecks!

The type of aeration stone is less important than the fact that you have one. However many of the bubbling decorations are limited in effectiveness because they only produce a thin stream that doesn’t agitate the surface or allow much turnover. 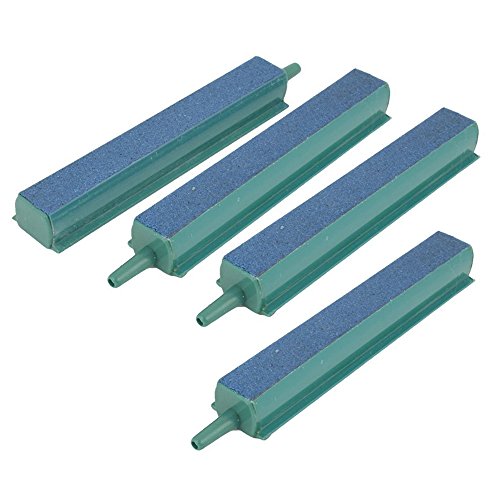 Air stones are typically partially buried into the gravel. This not only hides them to make the tank more aesthetically pleasing but ensures you get proper mixing of the bottom and surface zones.

Powerheads are the best way to get current and mixing in an aquarium. Debris can’t settle nearly as easily, preventing smelly anoxic pockets from forming, and many fish, plants, and corals prefer water flow over still water.

Adjusted properly, powerheads can also agitate the water’s surface, though be careful! Powerheads are strong enough to splash water around and even out of the aquarium. And if you’re not careful in monitoring the evaporation rate, you may get more agitation than you planned for. Typically we want 10 GPH for every gallon of aquarium volume when shopping for powerheads. 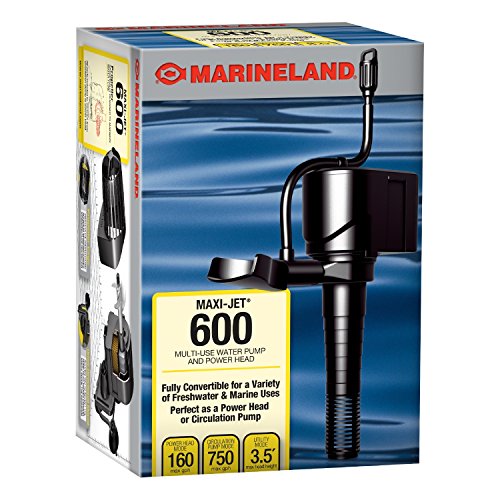 Powerheads are also very aesthetically pleasing if you don’t like the look of bubblers. They are sometimes harder to hide. However the current they create is beautiful when paired with live plants for a visibly waving effect and schooling fish like Tetras will position themselves to work against the flow and pick up food that wafts by as they would in Nature!

If you’re trying to decide whether an air stone or powerhead is right for you, this video discussion on the topic raises some good points!

The last way you can increase aquarium aeration is to adjust the outflow of your power filter. These units typically hang on the edge of the aquarium and spill water into the tank continually.

Most of the time we prefer to fill the tank enough so that there is no splashing sound and water pours back into the system smoothly. However by removing a small amount of aquarium water the filter creates a mini “waterfall” that agitates the surface for additional aeration.

Aquarium aeration is a simple yet effective way to ensure your fish have all of the dissolved oxygen they need. Good aeration keeps bad smells at bay and your fish healthy. That’s why I recommend combining several of these techniques to cut off future problems before they begin!