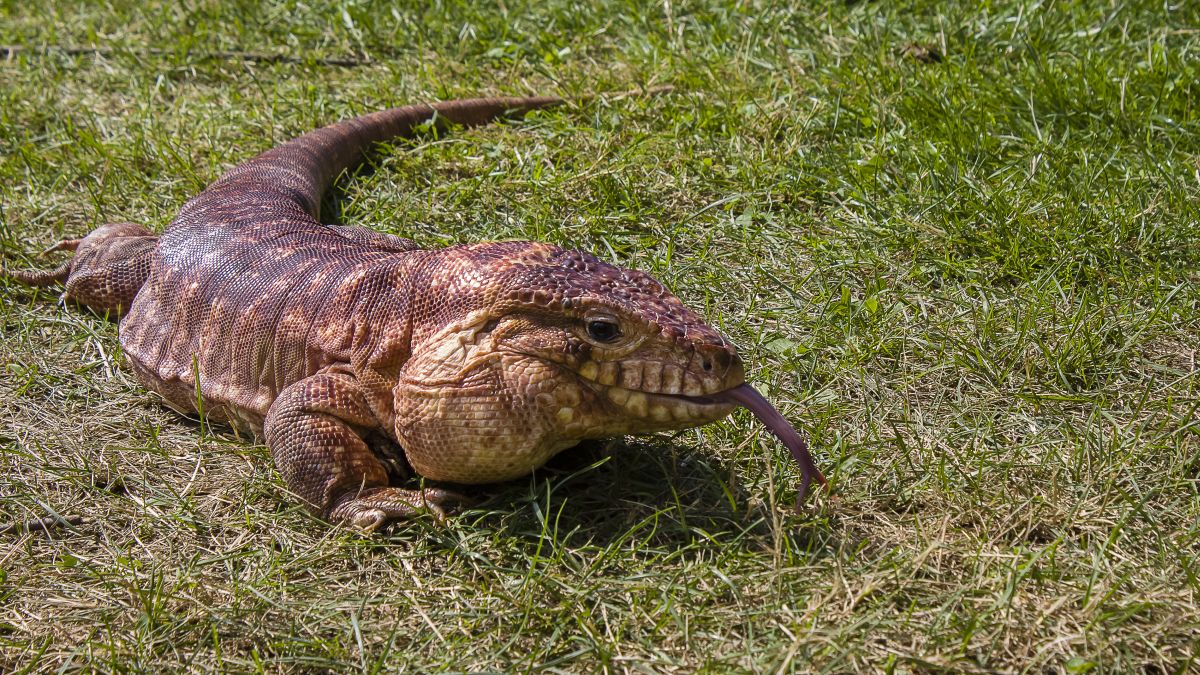 Black and white tegus are also intelligent and one French study found that they may even dream. They do need more space than smaller lizards. Yet the reward is a personality that’s more like a dog than a reptile.

What is the Argentine Tegu Lizard?

Argentine black and white tegus are the largest members of the genus Salvator. These lizards are found from the south of Brazil to Argentina.

Tegu habitat is very diverse; they are found in savannahs, tropical rainforests, and swamps throughout the continent.

Tegu lizards occupy the same ecological niche that monitor lizards do in the Old World. They are large, opportunistic predators that overpower smaller animals.

Unlike monitor lizards, tegus aren’t strict carnivores. They are omnivorous and also need plant matter in their diet.

Tegu lizards have made the news in the United States. Pets that escape or are let loose when they grow too large have started to breed in the wild. Most of the USA is too cold for them.

But Florida is one of the warmest parts of the country, even in the winter. Tropical pet reptiles, including green iguanas and burmese pythons, have established themselves here.

As climate change worsens, the range that invasive reptiles survive in will also expand. Argentinian tegu lizards are being found in southern Georgia as well.

Tegu lizards in Florida are a major issue because they will eat anything small enough. Endangered bird eggs, baby birds, turtle eggs, and small mammals are all on the menu for a tegu.

What is the Argentine Red Tegu Lizard?

The argentine red tegu is not just a color morph. It is a separate species (Salvator rufescens) and a close relative of the black and white tegu. Argentine red tegus are a ruddy maroon in color but have a similar pattern of black stripes and spots.

Some reptile keepers claim that red tegu pet lizards are a little more handleable. Or that one species grows a bit larger than the other.

But there is no solid evidence to prove that either species differs in terms of care needs. Both the red and the black tegu species are excellent pets.

There is also the columbian tegu (Tupinambis teguixin). It is a smaller species that reaches 3 feet in length. But columbian tegus tend to be more aggressive and take longer to grow used to handling

Despite their size, black and white tegus are good reptiles for beginners. Just remember to handle them from a young age and keep humidity levels high in their enclosures.

How Big Do Tegus Get?

A black tegu monitor lizard will reach up to 4 feet in length as an adult. The rough rule of thumb for choosing a lizard enclosure is to select one that is double the length of the lizard.

A baby argentine tegu will live in a 40 breeder or 55 gallon tank for a few months. These lizards grow fast, however. In just 2 to 3 years you will have a full size argentine tegu.

Any tegu tank should be 6 to 8 feet long, depending on the sex of your pet lizard. Male tegus are longer and heavier than females. Males also have heavy jowls around their jaws, giving them a bulkier appearance.

Tengu lizard pets are too heavy to climb well. So you don’t need much in the way of branches or other vertical decorations.

Since they spend so much time on the ground, you should choose a substrate that allows them to dig. A tegu lizard needs a substrate depth of 5 to 8 inches, depending on the size of the lizard.

Soil, cypress mulch, and potting mix are favorites of tegu keepers. You can even use a mixture of all three.

Bark based substrates are the best option since they retain moisture well and allow digging. Bark substrates, especially cypress mulch, are also great for controlling odors.

Your substrate choice should also be able to hold humidity. Sand is a poor choice since it dries fast. Tegus need high humidity (70-90%) in their enclosures.

Without proper humidity black and white tegus suffer from skin issues. They will have trouble shedding their skin and suffer from mites. Respiratory infections are also common when the humidity is too low.

You might also add sphagnum moss and other items that hold water to their favorite cave. Air flow should be considered with care. While you do want some air flow, humidity is just as important.

Mesh enclosures are not a good choice for tegu lizards, nor is giving an entire room over to a full size tegu. It is too hard to maintain proper humidity unless you already live in a tropical climate.

Last, the enclosure should also have a bowl of water large enough for your tegu to climb into. Tegus soak often, both to cool down and to help soften dead skin during shedding. They will also poop in their water, so be ready to change it as soon as it grows foul.

Lighting for Tegus as Pets

Lighting is just as important as humidity for keeping tegu lizards. They need not only visible light but also heat and ultraviolet lighting. The basking area should be 95-110℉, with the air temperature outside of this area at 80-85℉.

At night the temperature needs to be no cooler than 70℉. You may need an under tank heating pad if you live in a cooler climate.

Ultraviolet bulbs provide your taegu lizards with vitamin D3. An essential hormone, vitamin D3 regulates calcium uptake. Without it, reptiles suffer from metabolic bone disease, which is fatal if not treated.

What Do Tegu Lizards Eat?

As omnivores, argentine tegu lizards eat both plant and animal matter. Variety is very important and a major reason why tegus suffer from nutritional deficiencies in captivity.

Too often hobbyists feed them just animal protein, which will cause renal failure in adulthood.

Juvenile tegus do eat more animals than plants. Tegus grow very fast and need extra protein. Crickets, mealworms, and other pet store insects are the foundation of their diet. But add occasional plant foods at the same time. Their tastes will change as they mature.

Young tegus should eat an insect meal every day. But as they grow larger, you need to add more plant-based foods to the diet of your adult tegu. They eat leafy greens, fruit, and even seeds in the wild.

Grated carrot, swiss chard, strawberries, melon chunks, blueberries, and other grocery store favorites are all suitable for a black and white tegu diet.

So long as you provide them with diversity, tegu lizards are some of the easiest pets to feed. You can even make premade balls of ground lean meat like turkey or fish.

Add diced or blended vegetables to these, with a liberal scoop of vitamin powder. Tegu meatballs should be kept refrigerated or frozen until you are ready to feed them.

It may take some time to train a young tegu to eat prepared food. They eat mostly live insects and associate motion with food at first. A tegu weaned onto prepared food will eat them with gusto once warmed to room temperature.

Adult tegus should be fed every other day, sometimes skipping an additional day. They are prone to obesity in adulthood. Especially if you offer meat at every meal.

People choose tegu lizards as pets because they offer an experience unlike most reptiles. Tegus that are tame do like to be held. They will even dance around their tank when they want to be picked up.

They learn to associate being held with exploring the world outside of their tank. Some tegus even learn to come to you when you call their name.

The younger you start taming them, the better, though. Older, untamed tegus, take more work and will give painful bites if feeling threatened.

When taking your tegu outside of its enclosure, giving it constant support is critical. A tegu should be lifted around its pelvis and shoulders, using your hands to form a “harness.”

When not moving the lizard around, you should let it lie on your shoulder or sit cradled in your arms. Don’t stray too far from ground level unless you are confident in the mood and temperament of your tegu lizard.

Even a tame tegu may be spooked by a loud noise or unfamiliar person. Or it may not want to be held. A sudden dash will lead to a long fall down.

Here is a video of Macgyver tegu lizard, a pet that knows its name and demonstrates how gentle these reptiles are:

The white and black tegu may seem like a handful due to their large size. So long as you keep up with its rapid growth then you have little to worry about. Tegus can even be trained to eat prepared food and walk on a leash. They are as low-maintenance as a lizard can be.

More FAQs About the Argentine Tegu

How Did the Tegu Lizard Get to Florida?

Florida tegu lizards are the descendents of reptiles that escaped from local breeding pens. Fish and reptiles escape when seasonal hurricanes cause damage to these facilities. Also, hobbyists who were not ready for the size of an adult tegu sometimes release them into the wild.

How Much is a Tegu Lizard?

The price of a tegu lizard for sale depends on the species. Black and white tegus are the least expensive and cost $40 to $60. Adults are often available for similar prices from rescue agencies. A young red tegu for sale will cost $200 to $250.