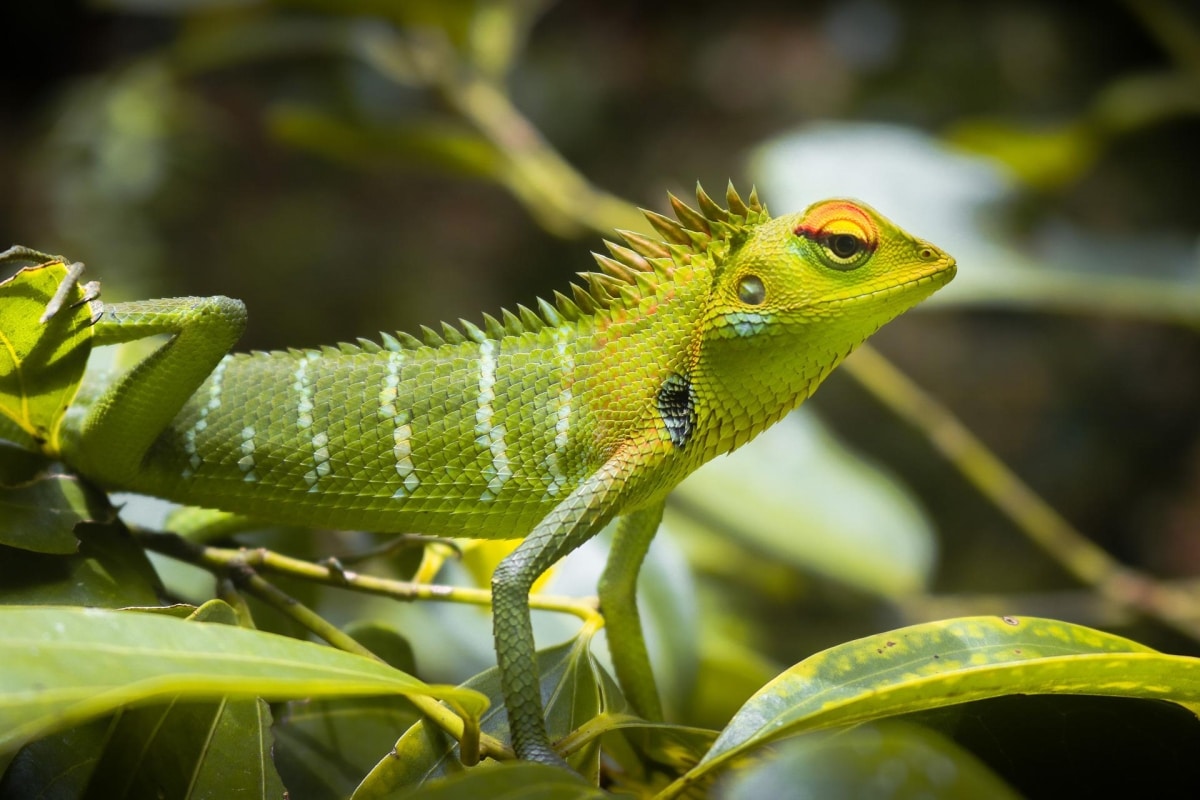 From monitors to geckos, there are many different types of lizards suitable for beginners. Do you prefer a gentle vegetarian?

Or maybe you enjoy the spectacle of the active hunter? A species that is small and easy to manage? What about large specimens as long as you are tall?

As you’ll come to see in this list of lizards, there is a type out there to suit every reptile keeper’s wishes.

10 Different Types of Lizards for Beginners

Leopard geckos are native to the Indian subcontinent. But they are one of the most popular kinds of lizards to find in pet stores and are captive-bred in huge numbers. They are considered to be the first domesticated lizard in the world.

Unlike many other geckos the Leopard Gecko is terrestrial. Instead of climbing up and down walls, they spend their time walking on sand and rocks at night.

Part of their charm is their face, which always appears to be smiling. Coupled with their large, light-sensitive eyes, these nocturnal lizards are a favorite of beginner lizard keepers.

Leopard Geckos are also one of the more vocal species of lizards out there. They will chirp and squeak to themselves and each other, often when they are hungry.

Bearded Dragons are Australian natives that are a sizeable type of lizards. If you’re looking for a pet a bit bulkier than a Leopard Gecko or Green Anole they are ideal.

Bearded Dragons get their name from the pointed scales that grow beneath their chins. When angry they will puff these scales out to make themselves look more fearsome and dragon-like.

That said, captive-bred dragons are mild-tempered, for the most part. They grow accustomed to being handled and will even ride on your shoulders when you take a walk with one.

The one complication to Bearded Dragon care is that this lizard species is a true omnivore. They need diversity in their meals. A mixture of fruits, leafy greens, and insects dusted in vitamin powder will ensure they remain healthy.

Green Anoles are great for the space-limited. As one of the smallest kinds of lizards on this list you can keep a single adult male in a 10 gallon aquarium. As insectivores they feed just on small insects. Crickets, mealworms, and other bugs are easy to find at local pet stores.

That said, anoles are social and show very interesting behavior when kept in small groups. Male Green Anoles use their showy throat flaps to threaten each other and impress females to mate with.

There are several species of anole, found throughout the Caribbean and South America. Some, such as the Cuban Giant Anole, grow much larger. Most are great pets with similar care requirements. Warmth, humidity, places to climb, and vitamin-dusted insects are what these lizards require.

Tokay Geckos are a large species native to tropical Asia. They are very vocal pets and will call to one another at night. Their call is distinctive – and native words for the sound are where the name “Tokay” comes from. Tokay Geckos will also chirp at each other and bark when afraid.

Like most geckos the Tokay Gecko is carnivorous. Insects for the bulk of their diet. But being a larger species they will even eat different lizards that are smaller, baby mice, and other prey.

Tokay Geckos also aren’t as willing to be picked up as the other lizards in this list. They tend to be aggressive and will give a painful bite when they don’t want to be handled.

And as fast as they are one may escape and end up running up your walls if it gets loose. It’s best to watch this lizard breed from behind the glass.

As impressive and large as the average Blue-Tongued Skink is, these lizards are quite relaxed. They adapt well to being handled and only bite if feeling threatened.

Slow moving and thick-bodied, Blue-Tongued Skinks are great for beginners that don’t want speedy pets that might get loose. These lizards don’t climb and spend most of their time basking and grubbing along the forest floor, looking for food.

Blue-Tongued Skinks are an omnivorous member of the lizard family. Everything from peas and leafy greens to canned pet food will be accepted by them. As they eat it becomes obvious how they get their name: their bright blue tongue, which is also flashed in times of danger.

Savannah Monitors are one of the smaller monitor species – but they remain a larger lizard species for pet keepers. An adult will reach 3 to 4 feet long, including their whip-like tail.

When angry a Savannah Monitor will use this tail to raise bruises, scratch using their claws, – and bite with real force. But as long as you’ve spent time handling them when young they domesticate well. A tame Savannah Monitor even comes to enjoy being held or walked on a leash.

Monitor lizard types are all carnivorous and will eat anything small enough to overpower. A baby Savannah Monitor should eat mealworms, crickets, and pinky mice. As they grow older they will be able to handle hissing roaches, adult mice, baby chickens, and even a full-grown rat.

Dead food is recommended as live prey like rats will fight back. Wounds from fighting live prey may become infected and require treatment.

The largest of our lizard types for beginners is a little more common than it should be. Green Iguanas are sold in large numbers. But they are only suitable for hobbyists prepared to give them the space they need.

Green Iguanas will grow to be 4 to 6 feet long and will live up to 20 years. They need large, expensive enclosures – or even an entire room converted into a habitat.

Assuming the space and cost aren’t an issue, though, they make great pets. Green Iguanas are personable, intelligent, and full of personality.

Unlike most of the different types of lizards here the Green Iguana is a vegetarian. Dark, leafy greens, diced vegetables, fresh fruit…All cut into small pieces it can swallow whole.

Veiled Chameleons are the most common type of chameleon found in the pet trade. This is the species you will have the best success with. But they are on the difficult end of beginner friendly since they must have well-controlled humidity and temperature.

The size of a Veiled Chameleon depends on the sex of the lizard. Males can be twice as long as females are. As unique in appearance as Veiled Chameleons are, these are lizards best left alone. Handling them stresses a lizard quite a bit. They will often puff up and try to bite as well.

Veiled Chameleons have the famed projectile tongues of their kind. They eat insects, often snatching them from up to a foot away using their sticky tongues. That said, they also eat small amounts of fruits and vegetables.

Uromastyx lizards are sometimes called Spiny Tailed Lizards for their barbed, defensive tail spines. While Uromastyx are gentle tempered, one that is frightened may try to whip your hand or even bite.

Uromastyx size depends on the lizard types. Some reach maximum size at 10 inches while others will grow to be 3 feet long. They are also active lizards so give them plenty of space to wander around.

A tame Uromastyx lizard could even be allowed to explore a room with supervision. Or even be leashed and brought outside.

These desert dwelling types of lizards are vegetarian, feeding on leafy greens. Beans, soaked seeds, fruit, and vegetables should top off their salad for nutritional diversity.

Tegus are the American answer to monitor lizards and the Argentine Black and White Tegu is the largest of them all.

Tegus are different lizards and a favorite of reptile keepers due not just to their colors. But also their formidable intelligence. These Tegus can be potty trained and adjust well to regular handling if trained at a young age.

Argentine Black and White Tegus eat animals, with some fruit and seeds when younger. As they grow up they switch to a protein-rich diet of insects, bird eggs, and any smaller reptiles or mammals they catch.

There are so many different types of lizards found in pet stores. It is very difficult to choose one that is not just interesting but also easy to care for. This list is an introduction to not just what’s out there but which lizard types might be the most interesting to start out with.

Lizards are amazing in how diverse they are. Each of the types of lizards on this list has several related species that may be just as easy to keep. The one real limit is how much space you have to fill with lizard tanks. And people with just such a mindset often ask me these questions.

How Many Types of Lizards Are There?

According to Wikipedia there are over 7,000 different types of lizards. They range from tiny chameleons and geckos just a few centimeters long to the mighty Komodo Dragon, which grows more than 10 feet in length. Lizards are found on every continent in the world except Antarctica, which is too cold.

What is the Lizard?

Lizards are reptiles with a worldwide distribution. Several hundred different type of lizards are found in the pet trade. A few dozen are common to see. And of these, the 10 in this list are the easiest for beginners to keep.