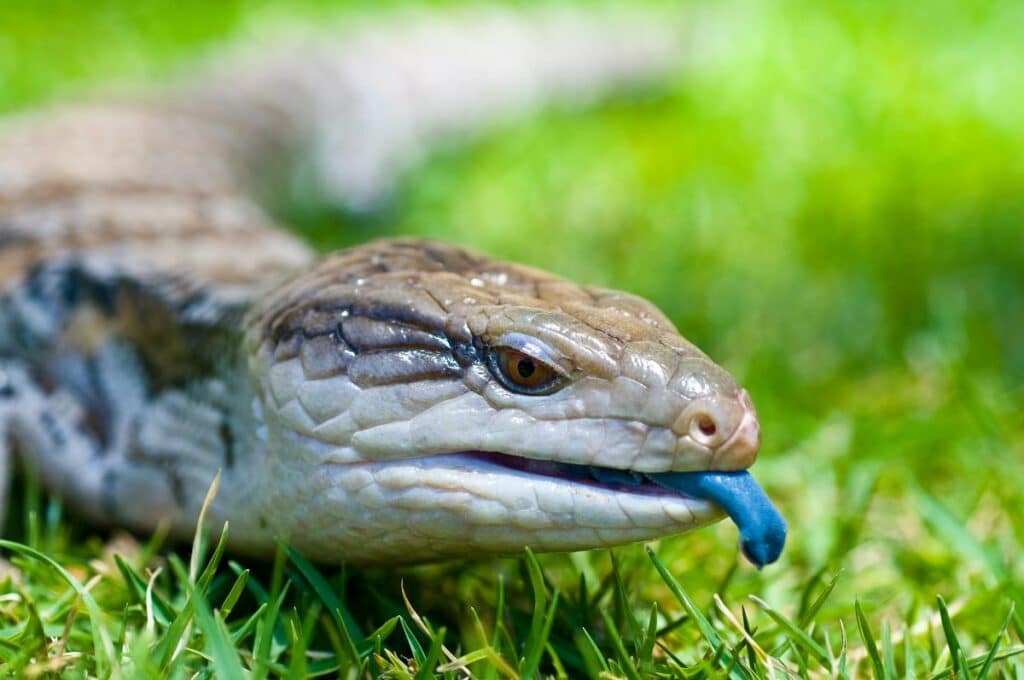 The blue tongue skink is a fascinating Australian lizard. They are seen at reptile shows and petting zoos because they won’t run or bite. Their impressive size also inspires endless questions from the audience.

These qualities also make them a favorite of reptile keepers who want a lizard to hold. Given their willingness to eat almost anything and moderate space needs, the blue tongue skink is an excellent choice. Even advanced hobbyists get years of enjoyment from these gentle giants.

What is the Blue Tongue Skink?

Many species look similar to one another. But some, like the Shingleback (Tiliqua rugosa), look like a very different animal. The shingleback has pinecone-like scales and a stumpy tail that acts like a false head to confuse predators.

Blue tongue skinks are large and heavy pet lizards but they aren’t very active. These ground dwellers spend most of their time basking and searching the undergrowth for food. Therefore you don’t need as large of an enclosure as you’d expect for such a large animal.

They get their name from their bright blue tongue. The skinks stick them out when feeling threatened, making themselves look larger and more impressive to predators. Since they have few defenses they rely on bluffs to frighten away attackers.

Blue tongued skinks will bite if they feel threatened. They have powerful jaws and will hold on rather than let go right away. They may even leave you with a bruise.

That said, it takes a lot to provoke these lizards as they are relaxed lizards by nature. Blue tongue skinks don’t move fast, trying to escape like many smaller lizards do. If they don’t bluff with their blue tongues then they will tolerate being picked up.

In fact, they even come to enjoy being handled. A tame bluey like nothing better than to close their eyes and feel the warmth of your arms while being pet.

If you are looking for a large lizard to handle every day then the blue tongued skink might be right for you.

Blue tongue skinks as pets are somewhat long lived. 15 to 20 years is typical for a full grown adult.

Blue tongued skinks are legal to buy and own. But this extends to the Australian skink species that are the descendents of individuals exported or captive bred since 1982. Since then, the country has set strict standards on exporting blue tongued skinks.

The Wildlife Protection Act of 1982 makes export illegal for private collectors. There remains a healthy stock of captive-bred skinks all over the world. But some of the rarer species are very expensive since they were exported in much smaller numbers.

Here is an article that offers extensive details on the Wildlife Protection Act of 1982 and its impact on blue tongue skink species.

Despite their size and exotic appearance, blue tongue skink care is simple enough even for beginners. They don’t need extreme humidity, eat a wide range of fresh foods, and are docile enough to be held even by children.

Designing Up a Blue-Tongued Skink Enclosure

Blue tongue skinks are not very active lizards. They do need enough space to wander from basking to cool conditions. But they don’t need as much space as bearded dragons and other, more active pets of similar size. A 40-gallon breeder or 55-gallon tank is enough for a single blue tongued skink.

The humidity level of the tank depends on the species of blue tongued skink you have. Some are from the tropical rainforests and need more humidity. The common Northern Blue Tongued Skink prefers a humidity range of 35-50%.

Choose a substrate that best meets the needs of a skink’s humidity needs. Tropical species should be kept on cypress mulch or coco coir. Interior species like the shingleback skink should have sand instead.

Blue tongue skinks should also have a water bowl nearby for drinking. The bowl should be shallow and large enough for the lizard to soak itself if it wants. Skinks often like to poop in their water as well. So be ready to freshen it as needed.

Soaking is often a prelude to shedding. If you see patches of flaky skin start to form, check the humidity. Misting a skink will help it shed all of its dead skin, as will soaking.

When designing an enclosure for any pet lizard, you need to pay special attention to the type and quality of lighting used. Reptiles need visible, infrared (heat), and ultraviolet (UVb) radiation.

Heat allows reptiles to regulate their metabolism; unlike us mammals, lizards don’t generate internal body heat. Without warmth, growth and immune responses slow. Digestion starts to slow as well and food will start to rot before it gets expelled.

UVb radiation serves a different purpose. A blue-tongued skink pet will bask to not only warm itself but also synthesize vitamin D3. D3 is a hormone that is essential for calcium uptake. Without it, reptiles are prone to developing metabolic bone disease.

MBD is a nutritional disorder that is fatal if left untreated. And even if caught and reversed, bones may become warped and heal at bad angles.

When calibrating the warmth of your habitat, aim for an air temperature range of 75-85℉. The basking zone itself should reach 90-95℉. Just make sure that any hard surfaces don’t exceed this as the heat will burn the sensitive belly of these lizards.

Some reptile keepers prefer using electric basking rocks instead. So long as the temperature range is selected with care these rocks are a great addition to a blue tongued skink enclosure. Being ground dwellers these lizards enjoy soaking up heat from warm rocks.

What Does a Blue-Tongued Skink Eat?

Skink blue tongue lizards are omnivorous. They eat an even mixture (50-50) of animal and plant materials. You should start with a mixture of leafy greens, sliced fruits, and diced vegetables.

Squash, cucumber, melon, strawberries, blueberries, and grated carrots are all appreciated. Add these to a salad base of spinach, lettuce, or chard.

You then top their salad with insects like wax worms or mealworms. Blue tongue skinks may have trouble catching crickets, which are fast jumpers. Hissing roaches and beetles are crunchy treats that provide variety in their diets. If you don’t want to handle insects, low-fat canned dog or cat food are convenient, protein-rich choices.

A blue tongue.skink will also eat slices of chicken and other animal meat. But it’s better to stick to insects or canned pet food. Chicken, beef, and other meats meant for humans are too high in fat for reptiles to eat often.

Last, dust any meal you offer with a blend of calcium and vitamin powder. These powders make up for any deficiencies a particular blend of ingredients may have.

Skinks are gentle tempered lizards. Even a full size blue tongue skink will bluff using its bright tongue before trying to bite. So long as you monitor any signs of aggression you are safe to pick them up.

When holding a blue tongue skink, use both arms to cradle them. If the skink wants to explore, sit down and let the animal move from your arms to your lap. And then to the ground, if it wishes. Tame blue tongue skinks don’t move fast but keep an eye on it anyway.

Skinks are able to squeeze themselves into very small places by flattening their bodies. And once it’s found a nice hiding place the lizard may inflate itself to become difficult to remove.

The blue tongue skink is one of my favorite lizard pets to recommend. Their slow moving and tolerant manners make handling them easy. Skinks eat almost anything offered to them. And their care requirements are basic. With the exception of leopard geckos and bearded dragons, blue tongued skinks might be the ideal pet reptile to start with.

Blue tongue lizard bites are rare but they do happen. Captive bred pet lizards have become tame over the years. But sometimes they are startled by sudden movements. Or they just don’t wish to be disturbed. Their bites are powerful and will even break the skin if they catch a skinfold. A blue tongue skink opens its mouth wide and sticks its tongue out at you to warn you. If you persist, you risk being bitten by one.

What Do Blue Tongue Skinks Eat?

Blue tongue skinks are omnivorous. In the wild, they feed on any fruit, leafy greens, and animal matter they find. Smaller lizards, bird eggs, insects, worms, snails, and carrion are all a part of their diet. In captivity, you need to replicate this selection by providing a blue tongued skink with a diverse diet.

Beginners would do well by choosing blue tongue skinks as pets. They are undemanding and need little in terms of specialized care. They also enjoy being handled and live for many years. A diverse diet and a mixture of UVb and infrared lighting are the most important aspects to keeping one healthy.