Goldfish, for all their simplicity, can be confusing fish to keep at times! We’ve all seen an unheated Goldfish bowl or outdoor pond. But what about your Goldfish – is your cute Moor or Shubunkin actually shivering and asking for warmth?

Do Goldfish Need a Heater?

As it turns out, the answer is both yes and no! It really depends on a couple of factors:

What Breed is Your Goldfish?

Believe it or not the variety of Goldfish you have will drastically affect how cold-hardy it can be. There are dozens, if not hundreds, of different types of Goldfish.

Whether you have a Black Moor, Shubunkin, Oranda, or feeder Goldfish they are all technically Carassius auratus, a small carp originally from East Asia. This means they will interbreed with ease and have very similar requirements.

All Goldfish are temperate fish and don’t absolutely require a heater, unlike fish like Discus that come from the steamy tropics. But Fancy Goldfish sometimes can’t take sudden shifts in temperature like their ancestors can and almost never down to near-freezing.

If you’re keeping these somewhat sensitive Fancy Goldfish, a heater is a good idea to help keep your temperature stable. You still shouldn’t let the water temperature go much above 75℉; in fact 68-72℉ is ideal for them as well as their less gently bred cousins.

So long as your home has a decently warm constant temperature you may not need a heater even for Fancy Goldfish. But if the temperature tends to swing towards colder than this I recommend having a heater to keep the water from growing too chilly.

Shopping for a reliable heater is sometimes a challenge given the variety of options out there. I recommend checking out my guide of choosing an aquarium heater something that best meets your needs!

Goldfish that Should Have a Heater:

What Conditions Were They Raised In?

Fancy Goldfish like Telescope Eye or Black Moors have been raised in stable aquarium conditions for decades now. Many are even raised in tropical conditions alongside Livebearers, Tetras, and other traditionally tropical fish.

If you know your Goldfish was raised in warm, gentle temperature conditions, don’t shock them by suddenly adding them to an unheated aquarium or pond. Give them time to adjust, bringing the temperature down a degree per day or so until you reach your desired range.

I would avoid keeping Fancy Goldfish below 60℉, especially large adults that have lived in heated aquariums their whole lives.

Pond Goldfish are a little different in their needs. Since most outdoor ponds (except for container ponds) are far too large to be heated efficiently, we assume that your Goldfish will be able to tolerate at least summer temperatures.

In the winter, you’ll typically bring them indoors if the pond is too shallow and at risk of freezing over. In most temperate countries, so long as your pond is at least 3-4 feet at the deepest portion, your Goldfish can hibernate over the winter.

As I said earlier, Goldfish and Koi are temperate fish. China and Japan aren’t especially warm during the winter! So long as the pond has a hole in the ice for oxygen-carbon dioxide gas exchange, your fish will overwinter with relative ease. 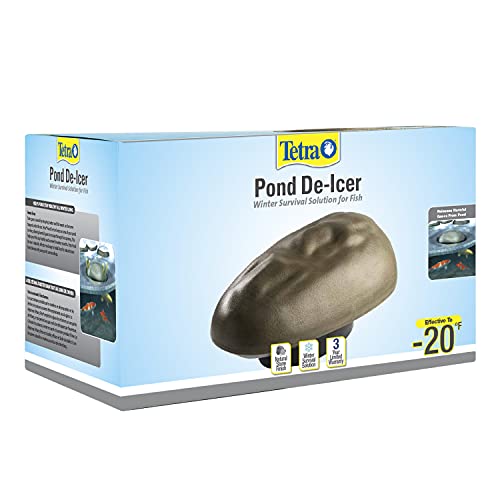 This is where a pond heater comes into play. Often referred to as a “de-icer,” these electric heaters keep a hole open in the ice so your Goldfish don’t suffocate from lack of oxygen.

You might be thinking “but why don’t wild fish need a hole in the ice?” The answer is that outdoor bodies of water are vastly larger than your backyard pond.

They also have way lower population densities. Natural ponds therefore retain plenty of oxygen over the winter to keep their animal population alive. But a man-made pond with many more fish needs a little help from you!

Too Hot or Too Cold?

What happens if your Goldfish get too hot or too cold? As it turns out, water temperature affects fish in very dramatic ways. Unlike you and me, the vast majority of fish are cold-blooded (ectothermic).

This means their body temperature is mostly or entirely controlled by the environment. As temperatures plummet, so do their metabolisms. Since most Goldfish are true temperature/cold water fish, they will simply continue to slow down until around 40-42℉ or so.

After this point they begin to enter torpor, or hibernation. They continue to breathe but barely move, resting on the bottom until Spring arrives once again.

Raising temperatures has the opposite effect and past 75-80℉ heat can even be harmful to them. The warmer your Goldfish get, the faster their metabolisms kick in. They need to eat more, poop more, and grow faster as a result.

Bacteria also work much faster to decompose leftover food and waste in tropical conditions. Ammonia, nitrite, and nitrate will accumulate much faster in warm conditions, which can lead to ammonia burns and other water quality-related issues.

Which makes it all the more important to have a filter for your Goldfish bowl or aquarium if the water is on the warm side!

If the environment your Goldfish bowl, pond, or aquarium is in changes temperature rapidly, a heater is a very good idea. Temperature changes typically occur gradually with the sun’s movements or seasons.

Sudden, drastic shifts are quite stressful as their metabolisms jump up or down to keep pace with the temperature change. Spikes in both heat and cold can prime Goldfish for opportunistic diseases like Ich or Fin Rot.. Especially if their living conditions aren’t the cleanest.

Sudden temperature swings can also affect their digestion. If things suddenly get colder for your Goldfish, a gut load of food may not be properly digested in time. This can lead to intestinal bloating as the food rots inside their gut, which can easily be fatal.

Pond Goldfish often encounter temperature swings if their pond is situated in a patch of sun. A small container pond being suddenly exposed to noonday as the sun peeks over a roof or fence can cause the water to get hot dangerously quick. Likewise, temperatures can plummet quickly once the sun sets, again causing your fish stress.

In summary: Goldfish don’t need heaters – most of the time. If the conditions of your home or outdoor environment get too cold for either fancy or common Goldfish, you may need a heater.

Remember that Goldfish are endothermic, meaning their metabolism is controlled by the external environment. Choose a temperature that’s neither too hot nor too cold (60-75℉) to keep them healthy and thriving.

Heaters help to help stabilize the water temperature or prevent too much ice from forming during the winter. A heater is a great investment to keep your temperate pets alive and well worth taking a look at!

Do Goldfish Need a Filter? Your Questions Answered
Can You Keep Guppies in an Outdoor Pond?