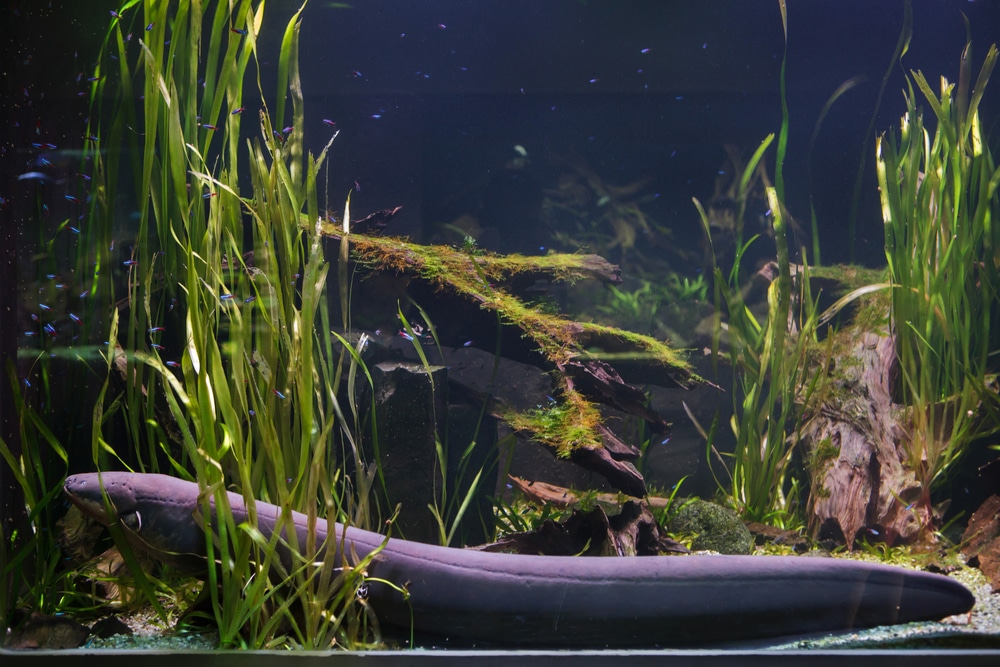 Unfortunately, freshwater eels are almost entirely a misnomer! True eels are specialized fish of the order Anguilliformes with a very complex life cycle.

True eels are never found in freshwater their entire lives; every species returns to the ocean at some point. A single exception is covered below but even this rare Freshwater Eel is a brackish water fish that’s simply tolerant of freshwater.

Unfortunately, each one of these Freshwater Eels is as much an Eel as a Freshwater Shark is a Shark. They have long, eel-like bodies and similar bottom dwelling habits but that’s all they have in common. That doesn’t mean we can’t enjoy them, though!

As a group, Freshwater Eels are hardy carnivores that are undemanding in terms of water quality. They can tolerate pH ranges from 6.5-7.5 and temperatures from 72 to 82 degrees.

The main considerations for keeping Freshwater Eels are ensuring the tank lid is tight fitting and does not have holes large enough for escapes. Most are also large fish and create copious amounts of waste, making good filtration essential.

With the exception of the Electric Eel, all of these fish can be kept in community tanks with fish too large to be eaten.

Here are a few species of freshwater eels that can sometimes be kept in aquarium:

Electric Eels are world famous for their high voltage, low amperage shocks. They use special muscles along their bodies store electricity similar to how a row of batteries powers a flashlight. While rarely fatal the shock is intensely painful and can briefly stun people.

In the muddy waters of the Amazonian shallows these electroreceptors help the Eel detect changes in its personal electric field as it navigates blindly. Even dangerous predators like Caimans and Piranha are no threat to an adult Electric Eel.

In the aquarium you need to pay special attention to their quirks and not just the electric shock ability. These Freshwater Eels get 80% of their oxygen from the air, taking loud gulps every 10 minutes or so. This makes good air flow and a bit of space between the hood and water surface essential.

Electric Eels will eat anything moving that they can fit into their mouths, including small mammals and amphibians. Their electrical discharge makes a single species tank mandatory; even fish large enough not to be eaten can be killed by a discharge as Electric Eels are extremely territorial.

Fortunately, they are too large and slow to try to escape their aquariums, unlike the other Freshwater Eels in this list!

Tire Track Eels are Southeast Asian Freshwater Eels that are fairly common in the aquarium trade. The Spiny Eels as a family (Mastacembelidae) are all large fish, reaching nearly 3 feet in length.

During the day Tire Track Eels prefer to be hidden in caves and will even bury themselves in gravel or sand. Fine sand is a better substrate as its easier for the Eel to dig into and won’t damage their smooth skin.

At night Tire Track Eels search the bottom with their sensitive snouts for invertebrates, worms, and small fish. While they will learn to eat during the day they still have strong nocturnal habits and tend to be more active when light levels are low.

Frozen foods like brine shrimp, bloodworms, and tubifex worms are happily accepted as are raw and live meaty items. While Tire Track Eels are opportunistic predators they are peaceful towards any fish they can’t eat and are great for large community aquariums.

Fire Eels are some of the longest Freshwater Eels, topping 3 feet in the wild. In aquariums 24-30″ is more likely. As a Spiny Eel they share the same care requirements as their cousin the Tire Track Eel.

Fire Eels are slightly more expensive due to their striking black, red, and yellow patterning. They are also less common, being wild caught and not captive bred for food like other Spiny Eels.

They are also very personable, easily trained to take food from your fingers and a few even allow and seem to enjoy being gentle stroked underwater! Spiny Eels as a whole are hardy fish that are easy to care for as long as they are given ample places to hide, meaty foods, and a spacious aquarium.

Also known as the Purple Spaghetti Eel, Moringua raitaborua is the only true Eel on this list. In the wild, these Southeast Asian Eels are found in brackish water habitats as adults and travel into freshwater to spawn. Added salt is always a good idea for Pink Paddletail Eels up to brackish levels.

These Freshwater Eels are thin for their length and have an attractive pink to light purple hue. While carnivorous, they have tiny heads and aren’t a threat to well selected community tank dwellers. Barbs, Gouramis, and other deep bodied fish have nothing to fear but small tetras and livebearers could be consumed by an adult.

Pink Paddletail Eels are incredibly shy and prefer fine substrates to bury themselves fully, only venturing out at night to hunt for worms and invertebrates. Small caves and grottos are a good substitute for fine sand.

As a member of the Bichir family (Polypteridae) the Rope Fish is an ancient looking Freshwater Eel from West and Central Africa. They also sold as Reedfish or Snakefish in the trade.

Like their Bichir cousins, Rope Fish have primitive lungs to help them survive in the stagnant swamps they call home. They need access to fresh air every 10 minutes or so but otherwise spend their time along the bottom and midwater hunting for prey.

As opportunistic carnivores they should be offered fresh and thawed invertebrates like worms as well as ghost shrimp and feeder guppies.

Rope Fish are peaceful towards anything they can’t eat and are striking, unusual community tank inhabitants. Rope Fish are some of the worst Freshwater Eels when it comes to escaping the aquarium.

In nature they can easily travel between shallow pools thanks to their serpentine motion and air breathing ability. A tight fitting lid with no holes is essential because they will search constantly for ways out at night.

The Rubber Eel is a true evolutionary relic as its actually an amphibian with fish-like characteristics! They are Caecilians and are cousins to frogs, toads, and salamanders. As a group Caecilians are shy creatures that live in caves, underground, and other places where they rarely see sunlight.

As you might guess, Rubber Eels are air breathers and have lungs. But most of their oxygen needs comes directly from the water column as they also breathe through their skin, making well oxygenated water essential for their health.

These Freshwater Eels are carnivores much like the others and will accept worms, fresh meat, and small fish as food. Rubber Eels will also breed in aquariums when well fed and kept in pairs.

Females have lumpy growths along their entire bodies and are slightly thicker compared to males. Rubber Eels give live birth to up to 7 young after a 220 day pregnancy!

Asian Swamp Eels are a common, hardy species from South and East Asia. As opportunists they will eat anything offered and are one of the few Freshwater Eels that will eagerly take prepared food like flakes and pellets.

Asian Swamp Eels are problematic if they get loose, however. As they are raised for food by the thousands in Asia they are cheap imports for the aquarium trade. Unfortunately, they have naturalized in several US states, including Florida and Georgia.

Asian Swamp Eels have few to no natural predators in the USA and disrupt ecosystems with their massive appetites.

While not true Freshwater Eels they nevertheless can tolerate an incredible range of environments. When conditions are bad they simply slither their way to a new pond.

Asian Swamp Eels can even burrow deep into wet mud and hibernate for months until the waters return during droughts. This allows them to easily outcompete and spread, pushing out native species.

All four are sold under the name “African Lungfish” but look quite distinct from one another. So you’ll want to compare photos to determine which species you’re about to purchase.

Their gills are the main source of oxygen when young and as adults they rely mostly on their lungs for breathing. These Freshwater Eels are carnivores with huge mouths and use their mouths like a vacuum to inhale even fast moving fish.

As adults African Lungfish can and should be fed every few days rather than every day. They can survive as long as 3 ½ years without feeding. In the wild when water levels drop during droughts they bury themselves in mud and hibernate until the rains return.