The Frontosa is a show specimen of a cichlid. However its unique water quality needs and predatory appetite make finding tank mates something of a challenge.

In this guide, we’ll cover a bit about keeping Frontosa Cichlids along with some of our favorite tank mates for these amazing fish.

So here are 10 Frontosa tank mates guaranteed to live nicely with your cichlids!

The Blue Dolphin Cichlid is a relatively large fish from nearby Lake Malawi. Since that lake is also strongly alkaline with hard water it does well with Frontosa conditions. Sometimes they are also called Humphead Cichlids as the males have a huge nuchal hump, similar to male Frontosas.

Personality-wise the Blue Dolphin is quite mild mannered as well and not nearly as scrappy as many other Malawi cichlids. Like Frontosas they live in small harems with one male and several females.

In nature the Blue Dolphin feeds mostly on benthic invertebrates: small snails, shrimp, amphipods, worms, and other organisms. While it will accept flakes and pellets it has high protein needs and should be regularly fed fresh and frozen foods.

Brine shrimp, bloodworms, chopped shrimp, and similar fare will preserve their health, improve color, and increase your chances of breeding them if you wish!

Coming from another continent entirely, the Jack Dempsey is an old aquarium staple that’s very easy to find in the trade. They get their name from the legendary boxer, implying that these fish are especially vicious!

In truth, Jack Dempseys can be somewhat territorial but they aren’t nearly as mean as the majority of Central American cichlids. And when kept with Frontosas and other sizeable fish, Jack Dempseys are on the tame end unless spawning.

Dempseys are incredibly hardy and come from hard, alkaline waters as well. There is even an Electric Blue variant that’s popular, though much more expensive. Electric Blues are typically more peaceful but somewhat sensitive to diseases and poor water conditions because they have been heavily inbred to achieve their intense color.

Dempseys will eat anything offered and like Frontosas, love to dig and uproot plants, so aquascape accordingly!

Peacock Cichlids are some of the gentlest fish in Lake Malawi. While they will scrap and display to each other on occasion they rarely molest their tank mates unless a fish tries to eat their young fry.

Peacocks are sand sifters and invertebrate eaters, looking for insect larvae, worms, and other treats along the lake bottom. Despite being brilliantly colored they are extremely active swimmers and are constantly on display, rivaling the occasionally shy Frontosas for showiness.

With over a dozen species, several hybrids, and hundreds of local variants available, there is a Peacock Cichlid to match any aesthetic. If you want white for your Frontosa tank, consider an albino. Looking for more blue? Aulonocara nyassae is one of the most popular and easy to find!

Peacock Cichlids are also very hardy and most lineages have been tank bred for decades. While they prefer Rift Lake water chemistry Peacocks can be kept and even bred in typical aquarium conditions!

Madagascan fish are relatively unknown in the hobby yet the island is home to some real delights. The Starry Night Cichlid is one of these; their midnight black and white, blue, and gold spangles are absolutely beautiful.

Starry Night Cichlids have a very similar personality to Frontosas: a bit bossy but not too aggressive most of the time. They are large predators and prefer similar fare as well: pieces of meat, carnivore pellets, and live prey like feeder fish and worms.

Water quality-wise these Cichlids aren’t especially picky, though they prefer their pH a little on the moderate size (6.5-8.0). If your Frontosa tank hovers around pH 8.0 the Starry Night Cichlid will make an excellent addition!

Black Calvus Cichlids are some of the most unusual fish in an already unusual lake. For starters, they have reverse-oriented scales that they use for defense. If chased by a predator they wedge themselves into a crevice and push their scales outward, making it nearly impossible to pull them out.

They can also push their sharp scales out and use them like an “attack cheese grater,” quickly rubbing against a problem tank mate to discourage them. So be careful when netting them as these scales can get tangled up easily in fine mesh nets.

Calvus Cichlids are also shell spawners instead of mouth brooders. The male and female lay their eggs in large snail shells and co-defend them until the young are large enough to disperse and hunt for small invertebrates.

One aspect worth mentioning is that Calvus Cichlids are very slow growing: by 6 months of age they are typically only 1.5 inches long! It takes 3 years for them to reach their adult size of 5 to 6 inches.

The majority of Malawi Mbuna are too aggressive to be good tank mates for Frontosas or much of anything besides other Mbuna. However the Electric Yellow Cichlid is a notable exception.

They offer a brilliant yellow contrast to the subdued blues and black tones of adult Frontosas. Electric Yellow Cichlids are also personable, active, and always eager to feed!

Unlike most Mbuna they aren’t vegetarians. They do eat some algae and should be supplemented with Spirulina flake and blanched vegetables like spinach or zucchini.

However they eat more invertebrates than their cousins and so are less likely to get the infamous Malawi Bloat, a disease many Mbuna suffer from if given too much protein.

Here’s another Lake Tanganyika native that isn’t a cichlid for once: the Cuckoo Catfish. As you might guess they are closely related to the popular Upside Down Catfish (Synodontis nigriventris). While most Synodontis will swim upside down on occasion the Cuckoo Catfish usually swims right-side up.

The Cuckoo Catfish gets its name from its fascinating, complex breeding strategy that can be replicated in the aquarium. They travel in groups looking for spawning cichlids.

Once they find a pair they either insert their own eggs into the mass as the cichlids are spawning or force the new mother to spit out some eggs, which the catfish then eat while dropping their own.

After the cichlids successfully “chase them off,” they pick up the catfish eggs and raise them as their own! Here’s a fascinating view of the breeding strategy they use!

It goes without saying that if you intend to breed your Frontosas you don’t want these catfish around in groups. However they are otherwise excellent Tanganyikan natives that work nicely in a lake biotope aquarium.

These fish are typically sold simply as “Red Rainbowfish” however “Irian” tells you they are specifically from Irian Jaya, Indonesia. Like the African rift lake cichlids, Rainbowfish have speciated into dozens of closely related yet distinct varieties in their homelands.

The largest and one of the most popular is the Red Rainbowfish. Most Rainbowfish are too small to be safely kept with Frontosas as they will likely be eaten. However these Rainbowfish grow up to 8 inches long and are extremely deep-bodied.

The males are intensely red and turn positively crimson when displaying for females and spawning. You’ll want at least two females per male to encourage their best colors and keep them from fighting too often.

The humble Plecostomus is an aquarium staple for good reason. They can tolerate a wide range of temperatures, conditions, and chemistries, including rift lake water. Since there aren’t too many native algae eaters available the Common Pleco is a great choice.

Plecos grow much larger than Rubber Plecos or Dwarf Otos, both of which would eventually be eaten by your Frontosas. They are a bit pushy in their own way as they grow older but aren’t especially aggressive as they have no real teeth to do damage with.

Large Plecos are sometimes known to attach to other fish to rasp mucus from their sides. But large cichlids will usually snap back, quickly discouraging the Pleco from trying again. 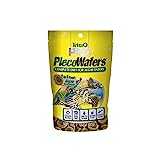 In the meantime, offer your Pleco blanched whole vegetables and sinking vegetarian wafers to keep them full once the algae runs out.

Mbu Puffer Fish are the largest freshwater puffers in the world and are only suitable for aquariums at least 300 gallons in size. These massive invertebrate eaters need tons of food and create equal amounts of waste.

They are a little on the expensive side to feed as a result! Live crayfish, whole mussels, snails, shrimp, and other fare are needed, shells and all. Pufferfish have heavy teeth and the roughage shells provide helps wear them down.

However Mbu Puffer Fish are very personable and worth the trouble. So long as they can’t eat their tank mates they typically ignore them. They are very fond of watching people come and go and their swimming style and appearance are fascinating.

Remember to always keep Puffer Fish submerged; their ability to take in water and expand is famous. However air can sometimes get trapped inside of them. If they can’t release it that trapped air can end up killing the Puffer Fish.