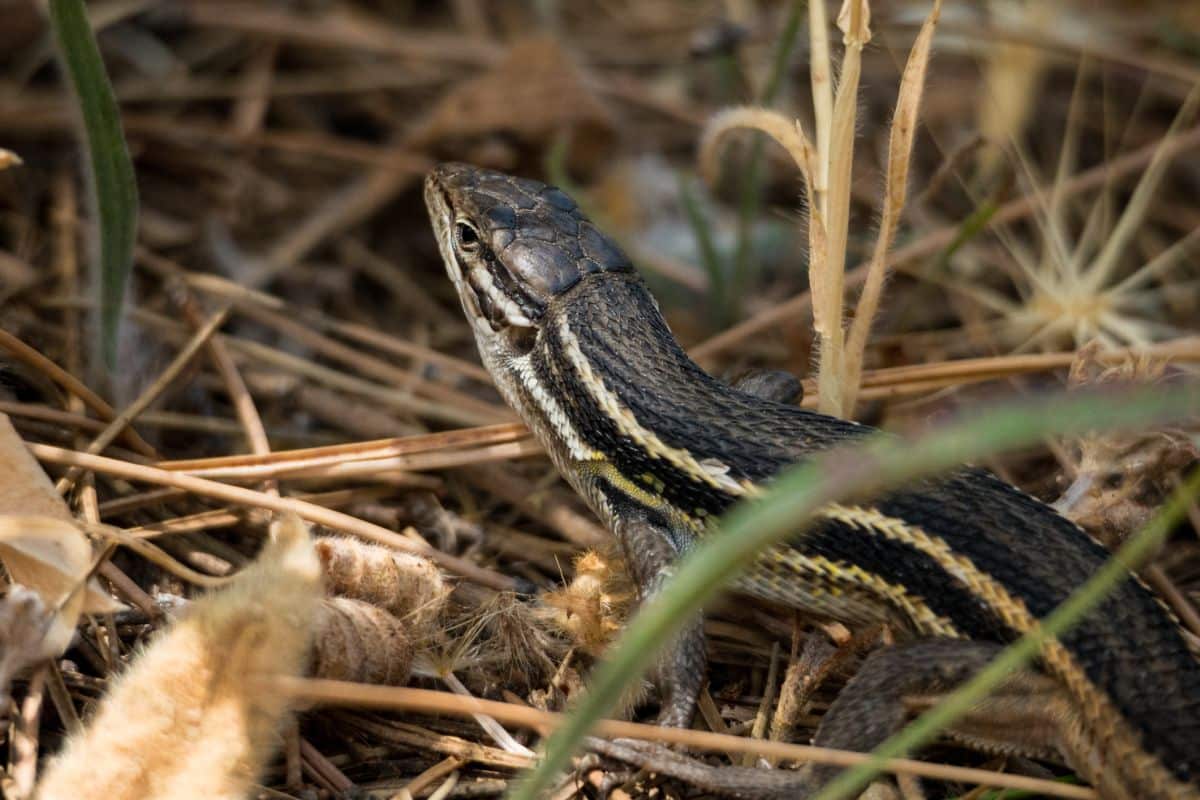 The long tailed lizard is creeping up on the green anole as one of the most common pet lizards in stores. And for several good reasons.

Asian grass lizards are trustworthy when taken out of their tanks. The setup is just as small and easy to clean. And they thrive on the same simple diet of feeder insects. Are long tailed lizards the right pet for you?

What is the Long Tailed Lizard?

You’d be forgiven for thinking the long tailed lizard was a snake at first glance. Even for a lizard, they are very elongated. Their tails are unlike any other species as they are up to three times as long as their entire body.

It also happens to be prehensile, allowing the lizard to grasp onto branches, grass blades, and leaves. While long tailed lizards do have strong tails, remember that they will also lose them if held too tight.

Long tailed lizards are from Southeast Asia, found in a broad ecological range stretching from Southern China down to Thailand, Burma, and Indonesia.

Forests and grasslands are their favored habitats, where their green and brown stripes allow them to disappear. Both when being still and when moving fast.

Inexpensive and uninclined to bite, long tailed lizards are a good choice for beginners. They even live in groups with little fuss, which is unusual for a lizard.

Long tailed lizards are not difficult to care for. And they are handleable for small lizards. But an uninformed beginner may have some issues with their lighting and humidity needs.

When designing a long tailed lizard tank, vertical space is just as important as horizontal space. These lizards enjoy climbing so think about decorations like vines, branches, and plants. All of these give your lizards added ways to explore their world.

With their long tails, you need more space than you’d expect for such a small lizard. As active as they are, long tailed lizards will use any space provided.

A 20 gallon aquarium is the bare minimum for a single adult. And if you plan on keeping more than one lizard together, use 10 gallons of space per lizard as a rough rule of thumb.

Ultraviolet light is invisible to us. But lizards see in both visible and ultraviolet light. They also absorb it right through their skin. UVb uptake is critical for making vitamin D3, which regulates calcium synthesis.

Without adequate vitamin D3 and calcium, you will see metabolic bone disease set in. MBD is reversible if caught early. But any deformities that form may be permanent. So start off right with UVb lights and calcium powder.

Heat lamps are placed over a single spot in the enclosure for the lizard to bask. As ectothermic animals, their metabolisms are regulated by the environment. A cold environment means the lizard can’t digest its food or grow right.

Long tail lizards need temperatures of 90-95℉, which are moderate heat levels. It’s a good idea to create vertical climbing space under the basking area using branches. That way your pet lizard will choose the right spot of temperature for itself.

The rest of the enclosure should be 80 to 85℉ during the day. Cooling down to 68-75℉ at night. If you live in a cold climate, an under tank heating pad will help the enclosure stay warm at night.

Humidity is also important for the long tail lizard. Improper humidity is a major reason why beginners sometimes fail with this species.

As easy as they are, long tailed lizards do come from a tropical climate. Without proper humidity, you will see respiratory infections, patchy shedding, and eventual death.

The enclosure should stay at 70-80% air humidity. The tank needs a hygrometer attached to the glass so you are able to monitor it and adjust as needed.

An automatic mister is an even better (if pricier) addition. If you live in a dry climate, I’d call this an essential tool. Constant swings in humidity are just as bad as low humidity.

Another way to maintain proper humidity is through choosing the right substrate. You need one that absorbs water, such as soil, peat, sphagnum moss, or some combination of the three.

If you like terrariums the long tailed lizard is an excellent inhabitant. They will climb along vines, live plants, and other decorations without harming them. Plants also transpire, releasing water vapor right into the air. In doing so, plants help maintain the humidity that long tailed lizards need.

Long tailed grass lizards prefer to drink from the water droplets that form from misting and high humidity. But a shallow water bowl is still a good addition. The lizards will drink standing water sometimes. And if they are having a difficult time shedding they will soak to soften any dead skin.

Another great aspect to long tailed lizard care is that they will coexist with other reptiles and amphibians of similar size.

Lizards don’t often mix with other animals, not even other lizards. They will become aggressive and chase similar looking lizards away.

Perhaps because of their fragility, long tailed lizards aren’t an aggressive species. They are too fragile in a fight. So it comes down to the tank mates you keep with them.

Green anoles are perfect long tailed lizard tank mates because their size and care requirements are identical. Anoles need the same moderate warmth and humidity. They are also insectivores and are similar in body size, not including the tail. Anoles are sometimes territorial but they save most of their social interactions with each other.

Long tailed lizards are also social with each other. They don’t fight and will huddle together when basking in the morning. In fact, I recommend keeping more than one of these lizards at all times.

They are long but very light weight. You can keep a colony of 3 to 5 lizards in just a little more space than you’d offer to a single pet lizard. The extra social interaction improves their lives in captivity. Which is often boring if left in an unchanging habitat, day after day.

Just be sure you are proactive about removing any eggs laid. Otherwise the tank will become rather crowded in short order.

What Do Long Tailed Lizards Eat?

The Asian grass lizard is an insectivore. They are always on the lookout for small invertebrate prey. Spiders, insects, slugs, and so on. In captivity, you have an endless supply of insects as a food source. Local pet stores will have crickets, mealworms, dubia roaches, and wax worms.

Some hobbyists will also throw in the occasional bug caught from the outdoors. If you do this, do so only as an occasional treat. Wild-caught bugs may introduce parasites to the animal that eats them.

One way that captive pet lizards die is from wasting diseases. If your lizard seemed to starve and die, despite having a good appetite, it may have caught a parasite from an infected insect.

Gut-loading your insects is also important, assuming your pet store does not. Gut-loading is when you offer your feeder insects nutritious veggies the day before. The reptile that eats them will get the nutritional benefits of this predigested food.

And you should always vitamin dust any prey right before feeding your long tailed lizard. Furthering its nutritional content.

Can You Handle a Long Tailed Lizard?

The long tailed grass lizard is unusual for a smaller pet lizard because they do tolerate gentle handling. Most species of small lizard are too skittish and fast to be handled. They will bolt often and end up getting lost in your home.

Long tail lizards will move fast when they want to. But if you move slowly and use gentle, confident movements the lizard will respond in kind. Long tail lizards are curious and active, so you will need to guide it and keep an eye on it at all times.

They still aren’t the best pet lizard for children to handle. Long tailed lizards are very small and fragile. A high fall or being grasped too hard will cause injuries.

Their tails will also drop if held incorrectly as a defense mechanism. While the tail does regenerate, it will be shorter and discolored compared to the original tail.

I recommend the long tailed lizard for reptile keepers that want a small pet they can occasionally handle. But not every day since they will stress if taken out too often. The space requirements for these pet lizards are moderate, with no custom enclosure designs needed. And feeding them is a simple matter.

What Can I Feed My Long Tailed Lizard?

Long tailed lizards are insectivores. Any feeder insects of the right size from your local pet store will be ideal for them. Just make sure you gut-load and vitamin dust any insects before offering them.

Asian grass lizards are better known for “swimming” across grassy meadows. They use their legs and long bodies to move fast while becoming invisible due to their color and shape. I do recommend keeping a water bowl in their enclosure. But long tailed lizards just use it to drink, not to swim. They will also soak if they have a difficult shed, which is a sign that the humidity is too low.

Sexing long tailed lizards is simple to do. The female will have a more muted range of green tones. She will be more of a muddy green or brown compared to a male. Male long tailed lizards also have visible hemipenal bulges around their cloaca. You will have to catch the lizard to see these, however.