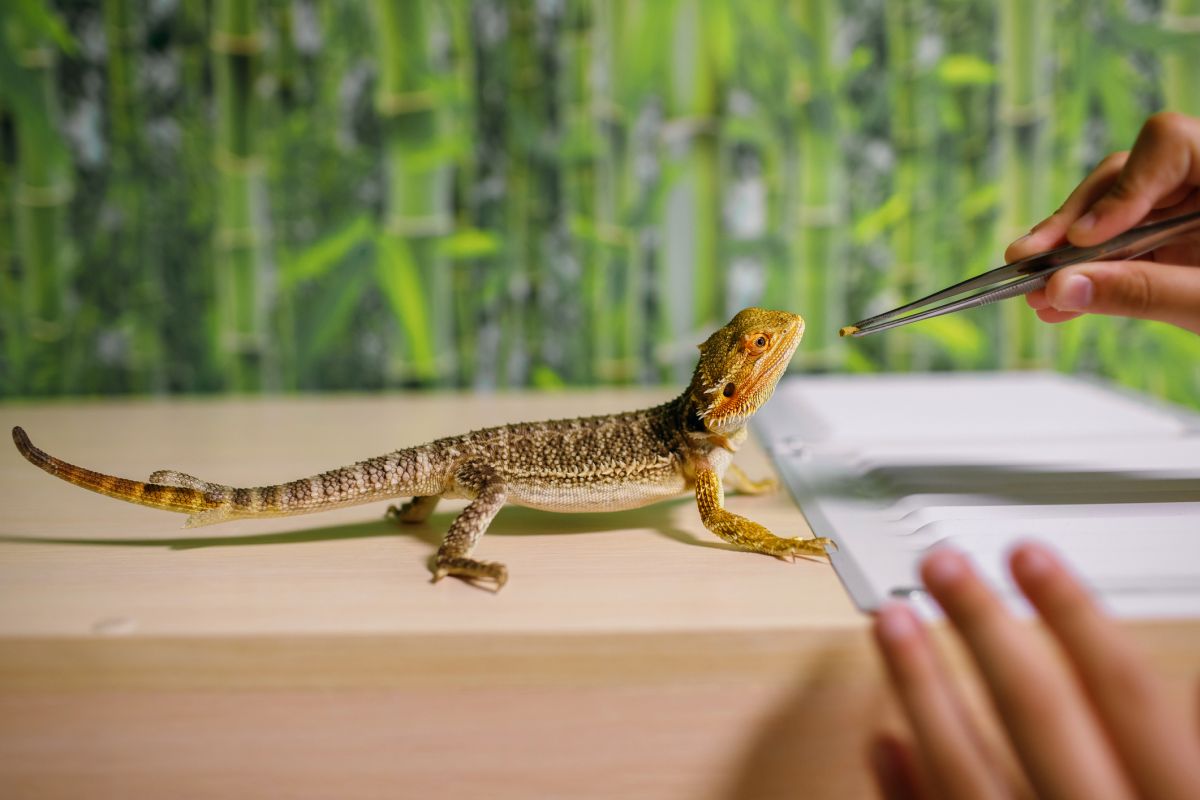 A balanced diet is key to a long and healthy life in any pet. Including lizards, who are more prone to nutritional deficiencies than other animals. But when you know what lizards eat, you will prevent most common health problems.

What Do Lizards Eat?

Lizards are some of the most generalized eaters in the entire reptile class of animals. Animals, plants, and carrion (dead animals) are all on the menu. Turtles do match lizards as they will eat both live and dead plant or animal matter. But snakes and crocodilians are all carnivorous.

Lizards are also very good at specializing . Some lizards, such as the horned lizard (Phrynosoma sp.) eat nothing but ants. Others feed on a small variety of plants found in one area of the world.

What Do Wild Lizards Eat?

Wild lizards often have a diverse diet compared to their captive counterparts. Even insectivorous lizards like green anoles and Mexican alligator lizards will eat a wide range of prey.

When you choose insects for your captive pet lizards, remember the variety that exists in nature. It’s not good enough to just feed crickets alone. Even if you vitamin dust and gut load, there are still missing elements and nutrients.

Crickets don’t have as much calcium or fat as wax worms, for example. Mealworms have a different nutritional profile, as do earthworms and dubia roaches.

If you want to offer your pet lizard wild insects, be very careful about which you choose. All wild insects carry the risk of passing on parasite eggs, intestinal worms, and other hitchhikers.

Caterpillars and other insects that tend to feed on just a single species of plant should be well researched. Because several caterpillars and nymphs eat poisonous plants like milkweed and nightshades (tomato, hemlock, etc).

These insects store these toxins inside of themselves as a defense. A lizard that eats one may end up very sick or dead.

Vegetarian lizards aren’t as common as carnivores, omnivores, and insectivores. But there are a few. The green iguana and uromastyx lizard are some of the most popular species.

Vegetation is low in nutrient density compared to insects and meat. So variety is even more important for herbivores. They will eat leaves, including young leaves and buds from tree branches.

Ground-dwelling lizards eat flowers, plant shoots, succulent plants, and mushrooms. Fallen seeds and fruit are also on the menu for many vegetarian lizards. You may also offer wild edible greens to your pet lizard.

So long as you know that the area you’ve harvested from is free of pesticide or herbicide treatments. Don’t pick vegetables along the side of busy roads, either. The plants will take up heavy metals and other pollutants from all of the traffic.

Lizards are, in general, not picky eaters. They eat a wide range of plants, insects, and/or meat. As you get to know your pet reptile, you will come to discover that lizards do have their favorite kinds of food.

Insectivorous lizards love rich, fatty insects. Waxworms and black soldier fly larvae are ideal for a lizard that has lost weight. Or is reluctant to eat for some reason. For larger lizards, silkworm moth caterpillars serve the same purpose (though they are harder to find).

Herbivorous lizards like treats that they don’t eat every day. If you feed a salad of leafy greens and vegetables, mix in some fruit for a change. Small berries like blueberries and strawberry pieces are excellent to include.

Carnivorous lizards enjoy rich, fatty meat. But these cuts should always be fed as occasional treats. Once a week, at the most. Obesity, kidney disorders, and other issues are fatal in pet lizards that eat too rich of a diet.

Salmon, snails, shrimp, and chicken are enjoyed by carnivores. Baby mice, baby chicks, and other vertebrates are a mainstay of the diet for monitor lizards, tegus, and other predators.

It’s not quite clear how reptile senses map onto our own. Some animals can’t taste things we can. For example, birds cannot taste capsaicin, the active ingredient in chilis. Spicy berries exist because plants want birds, which swallow fruit whole, to spread their seeds. But not mammals, which tend to chew seeds. Chili peppers taste painfully spicy to (most) mammals but not birds.

It’s also possible – even probable – that lizards may be able to taste things we can’t. Herbivorous animals tend to have more taste buds than carnivores. Leaves and other greens look very much alike. But one leaf might be nutritious, while another nearby is very poisonous.

Lizards do not eat grass. Even herbivorous and omnivorous lizards feed on bulkier plant material. Grass is very poor in nutrients. Which is why cows, horses, and other grass eaters have to eat so much of it.

Grass is also hard to chew and digest as it is rich in cellulose. Each blade of grass is also full of silica-rich structures called phytoliths. These glass-like bits will wear down the teeth of herbivores that aren’t adapted to eat grass.

What Do Baby Lizards Eat?

Feeding baby lizards is sometimes more complicated than feeding an adult. The diet of a lizard changes as it grows up. Baby lizards need more calories, more protein, and more food at first. As they grow up, all of these demands lessen.

For example, a baby bearded dragon needs a foundation of small insects. Which small amounts of salad greens, fruit, and grated vegetables. It needs to eat 2 to 3 times per day, every day.

An adult bearded dragon needs more vegetables than insects. It should be fed once per day, otherwise it will grow obese.

Otherwise, the diet of a baby lizard is similar. No lizard starts out as a herbivore and then changes to a carnivore as an adult.

What Do Lizards Eat in Florida?

What lizards eat in Florida is a contentious topic. There are loads of native lizards found in the Sunshine State. But several escapees from the pet hobby have become naturalized there.

As invasive species, these lizards wreak havoc with the local wildlife. They compete for food and habitats that native animals need. It’s common now to find green iguanas in trees, eating fruit and leaves that a native lizard might.

It’s not safe on the ground either. Not with invasive Argentine tegus hunting for small animals and their eggs to eat. Invasive species are often better at avoiding predators as well.

Local predators might not even recognize an invasive Florida lizard as food, making things that much harder for native animals.

Lizards will eat a wide range of items, given the species in question. Turtles are the one type of reptile that matches them for sheer variety. So any pet lizards you have needs to be treated to comparable levels of options. Otherwise they are prone to fatal malnutrition issues.

More FAQs About What Do Lizards Eat

Omnivorous and small carnivorous lizards do eat crickets. But crickets should never be the sole food you feed a lizard. Vitamin dusted crickets are a good foundation. They are also active, triggering an aggressive feeding response. But you’ll need to include more species of insects to their diet for a full nutritional profile.

Lizards will eat flies. But they aren’t often a part of their diet. Specialized predators like chameleons and anoles will be able to grab flies. For other kinds of lizards flies are too quick to be eaten. That said, pet stores now carry wingless fruit flies. They are tiny, however, so only feed these to baby lizards, long tailed lizards, and other smaller pet reptiles.