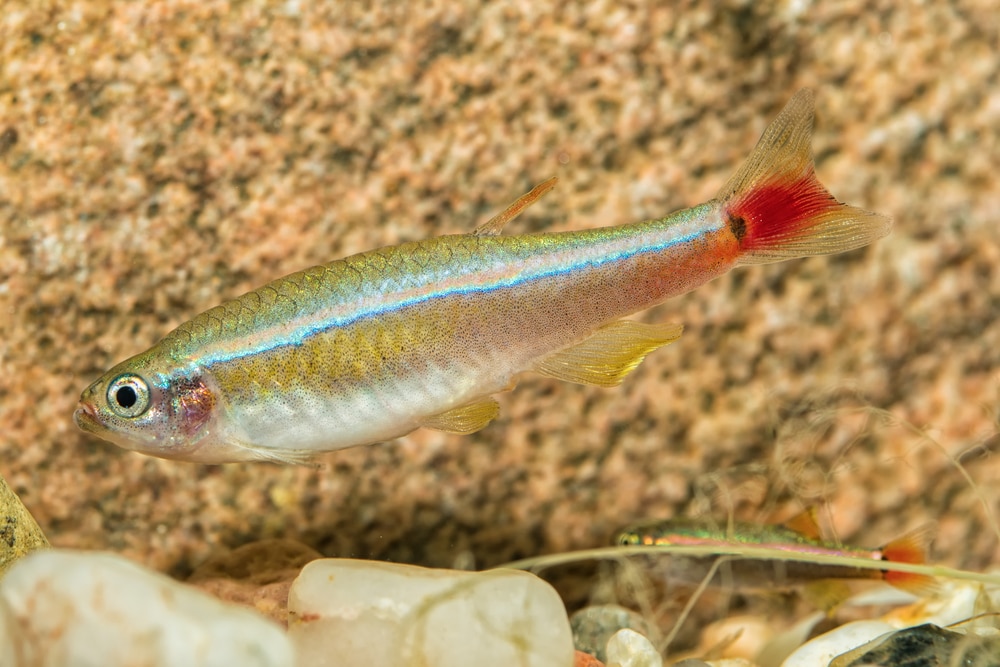 White Cloud Minnows don’t get enough attention, in my opinion. While not as thrilling in color as Guppies or Killifish they are still beautiful, with a subtle iridescence and delicate red finnage that they flare in complex displays for mates.

They are also inexpensive, easy to care for, and an ideal fish for a beginner looking to raise babies of their own! So why not get to know White Cloud Minnows a little better?

What Are White Cloud Minnows?

White Cloud Minnows are small schooling fish of the Cyprinidae family, which includes popular aquarium species like Goldfish, Tiger Barbs, and Zebra Danios. While formally described by science in 1932 they have likely been known to local Chinese and Vietnamese villagers for millenia.

In the 1960’s and 1970’s they were known as Poor Man’s Neon Tetras due to their similarity in patterning and cheaper price (Neon Tetras were much rarer back then). That name is no longer in vogue since the two species are comparable in price today.

White Cloud Minnows are famous for their hardiness, eager appetites and peaceful disposition. They are ideal first fish for aquarists and can even live in bowls alongside Bettas and other fish tolerant of unfiltered, cooler waters.

Unfortunately this fish is nearly extinct in the wild as it lives in a very densely populated region of the world. Development for tourism, agriculture, and industry have wiped out nearly all of its former habitat, which was never large to begin with.

All White Cloud Minnows in stores are captive bred and it’s hoped that these stocks will be used to replenish their numbers in the wild one day.

As one of the best beginner fish White Cloud Minnows are very undemanding. Here’s a basic breakdown of their care requirements!

As a true nano fish White Cloud Minnows can live comfortably in tanks as small as 5 gallons so long as they are the only inhabitants. While tiny they remain schooling fish and should be kept in groups of at least 6.

10 gallons and above give aquarists more room to work with as well as space for tank mates. Larger schools of 10+ individuals are recommended for aquariums larger than 29 gallons.

Regardless of tank size White Cloud Minnows are peaceful and won’t molest their tank mates.

Like all beginner fish White Cloud Minnows are hardy and can weather or thrive in a wide range of water conditions. However they prefer a pH as close to neutral as possible (7.0) with 6.0-8.0 being perfectly suitable as well.

Ammonia, nitrite, and nitrates should always be close to 0ppm however they are resilient compared to other fish and are often used to cycle new aquariums.

White Cloud Minnows live in highly oxygenated temperate streams in nature. As a subtropical fish they are not only tolerant of cooler water temperatures but actually prefer them.

They will live alongside Neon Tetras, Barbs, and other tropical species but anything above 72F is on the stressful side for them. Higher temperatures also result in pale, washed out color. Cool water brings out their iridescent sheen, brighter red tails, and deeper chocolate browns in the males.

They can also survive down to 41F, which makes them excellent outdoor pond fish for temperate countries. Their voracious appetites for mosquito larvae keeps their numbers from becoming nuisance-level.

Many Cyprinids will uproot and munch plants however White Cloud Minnows are entirely plant-safe as they are micro predators that prefer invertebrates and plankton.

Some aquarists report that White Cloud Minnows sometimes nibble on softer plants but this usually happens when underfed and kept in tropical aquariums that accelerate their metabolisms.

Finding plants that tolerate cool temperatures may be a bit challenging in some pet stores. Plants like Hornwort and Elodea are pond favorites that not only look great but also provide tangled nesting areas for spawning Minnows.

Marimo Moss Balls are another fascinating choice that tend to wither in tropical aquariums yet thrive when kept cool. Cabomba, Java Moss, and Java Fern are all easy to find and also do well in unheated tanks.

As a peaceful community fish White Cloud Minnows can be kept with the majority of aquarium fish in the trade. At least when it comes to personality.

Taking their preferences for cooler water into consideration the list narrows quite a bit. Many aquarists keep them in hotter water and while they will survive their disease resistance goes down and life spans get shorter as their metabolism skyrockets.

The following fish are all tolerant of cool water unheated aquariums. If you’re looking for additional ideas for your unheated tank, take a look at my list of 25 Awesome Cold Water Fish For Freshwater Aquariums!

So long as they tolerate cooler temperatures and can’t eat the White Cloud Minnows they will work nicely with them. Unlike some other schooling Cyprinids White Cloud Minnows are not fin nippers, making them great companions for unheated Betta tanks.

Every single White Cloud Minnow in the aquarium trade is captive bred these days. From Day 1 they have been trained on pellets, flakes, liquid fry preparations, and other prepared foods.

However if you want to see better color and higher chances of reproduction try offering tiny invertebrates such as Brine Shrimp Nauplii, Bloodworms, Tubifex Worms, and Daphnia. All of these items are available frozen in most pet stores and can also be easily raised as Live Food.

Spirulina flakes, blanched spinach and other vegetables can be offered on occasion as White Cloud Minnows will graze but very infrequently.

As easy as White Cloud Minnows are to keep, they are also some of the best fish for first time breeders! So long as you give them the right temperatures and spoil them a little diet-wise, your Minnows will do the rest!

Telling the difference between males and females is not an easy task as they are subtly colored fish and both sexes are similar in size. When fully mature males are slightly slimmer even when females aren’t carrying eggs.

Male White Cloud Minnows can also have more intensely red fins and are much more likely to spread them in fan-like displays towards other males. When well conditioned for spawning males usually become a deeper brown and their iridescent stripe can become even more reflective.

When kept in tropical aquariums (like your local pet store) these differences are minimal to nonexistent and makes it hard to get a good ratio for breeding. Ideally you want a school of at least 10 White Cloud Minnows. A 2:1 female to male ratio is best with a 1:1 ratio being the bare minimum.

Offer live and frozen invertebrate prey along with the standard prepared options to boost their color and production of gametes (eggs and sperm). Eventually the displays of the males towards each other and potential mates will intensify and the females will begin to visibly swell with eggs.

Fortunately, White Cloud Minnows are peaceful even when competing for mates and do no harm to each other in their “fights.”

They will eventually pair off and a single male and female each embrace within tangled of plants. While live plants offer several benefits to both adult fish and eggs, artificial Guppy Grass and Java Moss tangles will also do the trick.

White Cloud Minnow eggs hatch within 2 to 3 days of being laid. Unlike some aquarium fish the adult Minnows don’t care for their fry however they avoid immediately cannibalizing their eggs as well.

Once the fry hatch they are vulnerable, however. Choosing a single mass of tangled plant material such as Java Moss fixed to a rock is best if you intend to breed White Cloud Minnows.

After they spawn in the plant tangle you can easily move the fresh eggs to a fry rearing aquarium!

White Cloud Minnow fry are tiny enough to feed on Infusoria, powdered egg yolk, or liquid fish fry preparations. Live plants are also beneficial for fry aquariums because they encourage the growth of Infusoria and other microorganisms.

As the White Cloud Minnow fry mature you can increase the size of their prey to Microworms, Brine or Fairy Shrimp Nauplii, and eventually the same food their parents are eating. The fry grow fairly rapidly and will be large enough not to be eaten by their parents within their first 2 months of life!