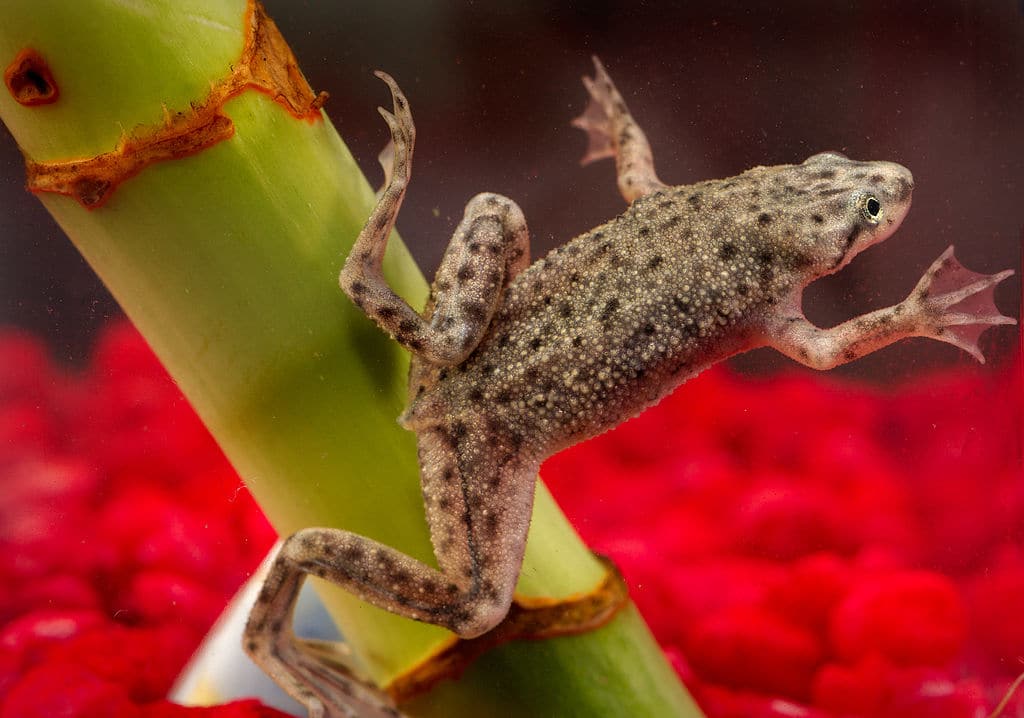 Frogs in the family Pipidae are some of the most unique animals on earth. They are highly specialized and are mostly to completely aquatic, despite being air breathing animals.

Pipid frogs are tongueless, toothless, and rely on their powerful front legs to snatch and shovel food straight into their gaping mouths.

Of all the Pipid frogs out there, African Dwarf Frogs are the only ones that are both small and common in the aquarium trade.

They are easy to care for and even breed so long as you’re aware of their few quirks and choose tank mates with care.

The majority of African Dwarf Frogs are of the species Hymenochirus boettgeri. The Western African Dwarf Frog (Hymenochirus curtipes) is also available but are less common. Seeing the two species side by side is the best way to tell them apart. H. curtipes has longer legs and more granular skin compared to H. boettgeri. However, their care requirements are identical.

Unfortunately, young African Clawed Frogs can get mixed in with African Dwarf Frogs on rare occasions.

In the image below (Clawed Frog), notice the lack of webbing on the front feet.

Also, the eyes of African Dwarf Frogs are on the sides of their heads while Clawed Frogs have eyes on top.

Here are a few things you should keep in mind regard African Dwarf Frog care:

African Dwarf Frogs are extremely flexible when it comes to water conditions so long as ammonia, nitrites and nitrates are within the usual parameters and temperatures are warm.

pH can range from 6.5-7.8. 74-80F is optimal, with warmer temperatures well tolerated. Less than 74F tends to lead to decreased disease resilience.

Water changes are of the utmost importance when caring for African Dwarf Frogs.

Amphibians of all kinds are especially susceptible to skin infections because their entire bodies are covered with a porous mucus membrane. If you let organic waste and food rot harmful bacteria will flourish.

These germs can cause infections in frogs that fish with their skin tight scales can shrug off with ease.

Cloudy patches of skin, hazy eyes, and red inflamed blood vessels, especially on the hands, feet, and legs, are signs of bacterial infection in your African Dwarf Frog. Fluffy patches of cottony growth indicate fungal infections that can become deadly if left untreated.

The thin skin of amphibians makes medicating them extremely challenging because doses that work for fish can kill them outright.

Providing a nutritional boost in the form of live and frozen foods will also help them overcome their illness. However, the best medicine really is prevention.

African Dwarf Frogs are so tiny and sensitive when diseased that it’s easy to overdose and kill them.

Thanks to their small size African Dwarf Frogs can find space in any aquarium. Some aquarists keep them even within 5 gallon nano tanks along with Bettas and Danios.

I recommend 10 gallons of space as a minimum; the larger the tank the easier it is to control water parameters.

Having more space for your pets to explore also improves their quality of life!

Choosing tank mates for your African Dwarf Frogs is not too challenging. Choose similarly sized fish and invertebrates that won’t eat your Frog and are too large to be eaten.

Fish fry, young Guppies, and other tiny fish can be in danger but most mature aquarium fish are safe.

Avoid Barbs, Dwarf Cichlids, and other fish with a tendency to nibble at tank mates. Even superficial skin wounds are an entry point for infections, which are usually fatal for Dwarf Frogs.

Plecostomus should be avoided for the same reason: Dwarf Frogs have bare, slimy skin that Plecos may be tempted to suck upon.

African Dwarf Frogs are also sociable and unaggressive towards one another.

While their social interactions are difficult to understand they do recognize and interact with each other, especially when in the mood to breed. Males also call on occasion even when alone but more frequently when kept with other Dwarf Frogs.

When feeding pellets, either pre soak them or choose soft pellets made specifically for African Dwarf Frogs. Thawed, meaty foods like blood worms, brine shrimp, and tubifex are better for their health and will get a better response from the Frog.

As bottom dwellers they sometimes can be slow to consume their fair share, especially in a crowded community tank. Feeding your Dwarf Frogs with tweezers ensures they have a chance to eat their fill.

I’ve seen a fair amount of literature online about handling African Dwarf Frogs. You should know that this is extremely dangerous not only for the Frog but potentially for you as well.

Dwarf Frogs are fragile vertebrates and don’t do well when held. They can leap, will struggle, and can easily break a limb, which will impair them from reaching the surface to breathe and reach food.

The odds of it healing are minimal since you can’t set the bone and the break will likely become infected and lead to death.

They are also fully aquatic frogs and dry rapidly when removed from the water.

15 minutes of exposure can lead to death. Also, even when wet your skin is rougher than a grog’s and strips slime from their vulnerable bodies.

Some writers suggest placing food on strings to encourage African Dwarf Frogs to chase food around like a lure. This is also a bad idea – if the Frog catches the bait and consumes part of the string you’ll be in real trouble.

Lastly, aquatic amphibians and reptiles of all types carry infectious agents directly on their skin, particularly Salmonella. If you miss a spot while washing your hands you risk infecting yourself and others with a dangerous bacterium.

Leave your African Dwarf Frogs inside the aquarium.

Breeding African Dwarf Frogs can happen spontaneously in aquariums when kept in groups. However the eggs and tadpoles are very unlikely to survive to reach maturity.

Stimulating your Frogs with ample food and conditions that simulate seasonal changes will increase your chances of success.

While subtle there are differences between the sexes.

When fully mature male Dwarf Frogs are smaller and have a visible white postaxillary gland which appears as a small lump behind each forearm. While the postaxillary gland plays a role in reproduction the exact function is still a mystery to science.

Males will also sing on occasion, even underwater! They make a static-like hum that almost sounds like a broken speaker. Females are silent, slightly longer and more robust, especially when carrying eggs.

In order to trigger spawning behavior, you’ll need to first generously feed your African Dwarf Frogs with frozen and even live prey.

Prepared foods are lacking in the diverse nutrition they need to produce gametes for breeding. Spoil your Frogs with brine shrimp, tubifex, and other meaty goodies.

Next, you’ll need to reduce the water level of your aquarium to around half for 2-3 weeks, which simulates seasonal African droughts. As the Frogs race to the surface dozens of times a day to breathe they are very sensitive to depth.

When you add fresh water, allow the new tank temperature to stay 5 degrees cooler than usual at first. Gradually bring the temperature up to 80-82F over the course of a week while continuing to condition them with meaty food.

As you replicate their natural drought/flood seasonal cycle, males in the aquarium will begin to sing more frequently, calling for receptive females. Males will also begin to grasp at empty water with their forelimbs, as if practicing for Amplexus.

Amplexus is the position all frogs and toads take when mating; the male will grasp the female from behind for an extended period as sperm and eggs intermix within the water. Males will occasionally grab at other passing males, which elicits a grunt and stiffened hindlegs in response.

Once a willing female is grasped, the two will swim up and down the water column over the course of hours. Anywhere from 100-500 eggs around 4mm in diameter are laid.

The eggs are coated in a sticky jelly that makes them less palatable to predators, protects them from infection, and glues them to floating plants.

Any eggs found should be immediately removed as tank mates and even the frogs themselves may consume them despite the jelly.

Caring for Eggs and Tadpoles

African Dwarf Frog eggs should be removed to a separate rearing tank until they hatch within 1-2 days.

The 3mm tadpoles initially are immobile and use an adhesive gland to attach to their place of birth for up to 6 days. During this time period they won’t accept food at all.

Once they become mobile, they will accept microscopic and miniscule food items like microworms, daphnia, and baby brine shrimp.

They will also happily eat one another; tadpoles are ravenous opportunists and also extremely fragile even in the best of conditions. Weak tadpoles become prey for their more vigorous siblings.

It’s a good idea to culture the rearing tank with green water and filamentous plants like Guppy Grass and Java Moss. This encourages algae and protozoan growth on the plant and tank surfaces, which are natural grazing areas for tadpoles

Your African Dwarf Frog tadpoles will develop hind legs within 2 weeks and front legs by 3 weeks of age. They complete their metamorphosis, losing their tails entirely, by 1 month in age.

At this stage they should be feeding on adult foods; bloodworms, baby and adult brine shrimp, and mosquito larvae should all be accepted.

By now your African Dwarf Frogs are roughly 2 cm long and can be allowed to grow until they are large enough to safely be introduced into the aquarium!