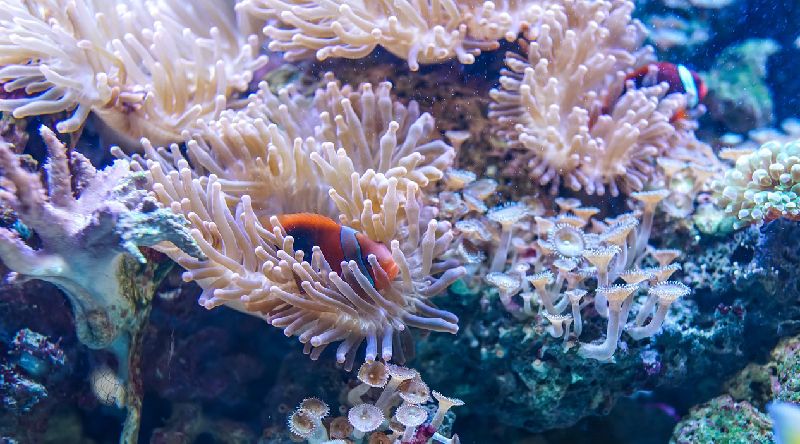 I hope you agree with me when I say…

Protein skimmers can take otherwise average reef tanks into exceptional and beautiful aquariums. That being said, protein skimmers are often the most confusing and difficult pieces of equipment to buy.

In the past, finding a good protein skimmer for nano tank was next to impossible. Small skimmers just couldn’t put out the power required for good results. Over the last few years, though, huge progress has been made. Here are our top candidates for the best nano protein skimmer on the market:

The USA 9004 DOC is made by Tunze, a trusted brand in the reef keeping hobby. They are known for producing amazing skimmers, so there is no doubt that their line of nano protein skimmers are all top notch. The Tunze USA 9004 DOC is a more powerful version of the 9001, yet still offers a small, compact design that runs remarkably quiet.

This nano protein skimmer is rated for tanks between 20 gallons (for heavy bioload) and 65 gallons (for light bioload). It utilizes a Flash-Skimming technique that runs quietly and efficiently. The 9004 DOC also does a great job at removing the dreaded “top-layer film” that plagues a lot of reef tanks. For this reason, this Tunze is a great all-in-one package.

It’s no surprise that another Tunze nano protein skimmer makes the list. The Tunze Comline Doc is an energy efficient, compact skimmer that really packs a punch, making it perfect for high-stocked nano and all in one tanks. It is rated for tanks between 5 and 37 gallons.

Like the Tunze 9004, the Comline DOC 9001 uses a “Flash-Skimming” technique that generates a large amount of bubbles while staying extremely quiet. You won’t have to worry about noise with this unit. In addition, Tunze’s anti-overfoaming patented feature ensures than none of the dissolved organics collected by the skimmer will return back into the water column.

The AquaC Nano Remora is the miniature version of the extremely popular Remora hand-on-back model. The Remora is one of the most trusted hang-on-back skimmers on the market, so it is no surprise that the Nano version is awesome as well.

The AquaC Nano Remora is one of the smallest skimmers on our list, rated for tanks between 5 and 25 gallons. If you are looking for a nano protein skimmer on the larger side, this definitely isn’t the best choice for you. Despite its small size, this unit still packs quite a punch. Once it’s broken in (can take 1 or 2 weeks), the Nano Remora pulls skim like a champ.

The AquaMaxx WS-1 is one on the most trusted names when it comes to nano protein skimmers. It is built extremely well and can be considered a “plug-and-play” model, meaning it takes little adjustments to work correctly. Simply plug in the WS-1, sit back, and witness the results.

Based on the quality, performance, and ease of use, the AquaMaxx WS-1 should definitely be at the top of our list; so why isn’t it? It is an in-sump skimmer, so its not a great choice for those will AIO tanks. If you do have a sump, though, look no further; the WS-1 is an amazing choice. Few other nano skimmers on the market can compare to this one.

The Eshopps Nano is a well-build, compact nano protein skimmer made for tanks up to 35 gallons. It is built to fit in the back filter chambers of most AIO reef systems (Biocube and IM Nuvo Fusion are both compatible), but can also be installed in any sump. Unlike most protein skimmers, the Eshopps Nano comes stock with a high-quality Sicce pump, which is leagues above what most other manufacturers use in their skimmers.

Due to its compact size, the Eshopps Nano is a great choice for those with all in one tanks. Though it can take a bit of adjusting and tinkering just right, this skimmer works like a charm once set up. That said, it is not the quietest option on our list.

The Hydor Slim Skim is another skimmer that has made quite a name for itself in the hobby. It comes in two sizes, one suitable for tanks up to 35 gallons and the other for tanks up to 65 gallons. Each model only uses 4 and 6.5 watts of energy respectively, so you won’t have to worry about either heating up your tank. The Hydor can be placed right into the tank or in any back filtration chambers.

This nano protein skimmer pulls from the surface of the water, eliminating any film on the top of your tank. It is a little larger than other models on our list, but its pretty sleek and doesn’t take away from the look of the tank too much.

Bubble Magus is a very popular brand when it comes to larger, more intense skimmers. Their Bubble Magus QQ1, though, is a small, affordable skimmer rated for tanks up to 25 gallons. As you can probably tell, the design of this skimmer is unlike any other on the market. In addition, it features a great needle-wheel Rock SP600 Pump that delivers a fair amount fo power.

The best thing amount the Magus QQ1 is the convenience factor. All you have to do is hang it on the side of your tank (doesn’t take up valuable tank space) and turn it on. In terms of noise, it is not loud but also not quiet. You will notice it, but not in an annoying way. On the flip side, this skimmer is a little limited in terms of ability. It definitely doesn’t pull as much skim as other options on the market. For the price, though, the Magus QQ1 is a great choice as long as your expectations are reasonable.

Be prepared to mess around with the AquaticLife 115 to get it working at full capacity. It tends to be a little more finicky than other on our list. In addition, you will probably notice a lot of micro-bubbles for the first few days with this unit. After the break in period (takes around a week), this skimmer should function fine. It’s definitely not the best on the list, but its much more affordable than other models. I tend to think of the 115 as more of a starter skimmer.

I know, I know…the Coralife Biocube skimmer definitely doesn’t have the best reviews out there. In my opinion, though, it is great for younger aquarium owners who are setting up their first saltwater tank. A friend gave me one of these when I was setting up my first reef tank and it was a great learning experience.

The Coralife BioCube skimmer is by far the smallest unit on the market, so it can be installed right into the back of any tank. It is a plug-and-play unit, so all the necessary equipment is included. It won’t pull the best skim, but it’s a great option if you don’t mind messing around with it. In addition, it is very affordable. Is long as you’re not expecting a top-of-the-line skimmer that is going to pull cups of skim out of your tank each day, there’s not much harm in picking up one of these. If you are buying specifically for performance, definitely go with a different model on our list; this isn’t for you.

How do protein skimmers work?

Protein skimmers are actually pretty amazing pieces of technology. They leverage an action that takes place naturally in the ocean and apply it to home aquariums (we will talk about this a little later).

In short, protein skimmers work by injecting thousands and thousands of tiny bubble into the water column. These bubble bind to dissolved organics in the water (broken down food/waste sticks to the walls of the bubbles). As the tiny bubbles raise to the top of the skimmer, the “dirty” ones overflow into the collection cup. There it is, a nano protein skimmer in action!

I mentioned before that this happens naturally in the ocean, but how? Waves.

As waves crash into the shore and stir up water, they produce thousands of micro bubbles just like protein skimmer. Ever notice how the foamy froth produced by waves on the beach is usually very dirty and nasty looking? This is the same stuff that a protein skimmer pulls out of your tank. Pretty interesting, right?

Do I really need a protein skimmer?

Protein skimmers are not an absolute necessity if you’re just setting up your reef tank. If you only plan to keep soft and LPS corals, you can get by without a protein skimmer. That being said, keeping your tank running smoothly will be much tougher without a skimmer. Here are some of the drawback of not owning a protein skimmer:

You can get by without a protein skimmer, but that doesn’t mean it should be done. I know I know…protein skimmers are expensive, but you will probable end up spending more on live rock/water changes by not owning a skimmer.

What are the benefits of using a protein skimmer?

Why isn’t my skimmer collecting any sludge?

I see this question all the time.

When you just set up a nano protein skimmer, chances are you won’t see any sort of results for the first few days. Protein skimmers, especially nano versions, require a “break in period” in which they adjust to your tank and start producing skim. If you don’t see anything for a few days, don’t panic; it is completely normal.

What sort of maintenance does a nano skimmer require?

Nano protein skimmers usually don’t require too much maintenance, mostly because they are relatively small. That said, there are a few things you should do to make sure your skimmer runs smoothly:

Important Tip: Don’t “scrub” the inside of the skimmer or collection cup too often. By cleaning these part too much, your protein skimmer will have to “break in” again as the coatings build up on the inside. Simply emptying the collection cup and swishing it around in a cup fo tank water should be more than sufficient.

We hope you’ve enjoying our reviews of the best nano protein skimmers on the market. In terms of performance, all of these brands should work great at cleaning your tank (with the exception of the BioCube skimmer). Enjoy your newly improved tank and happy reefing!